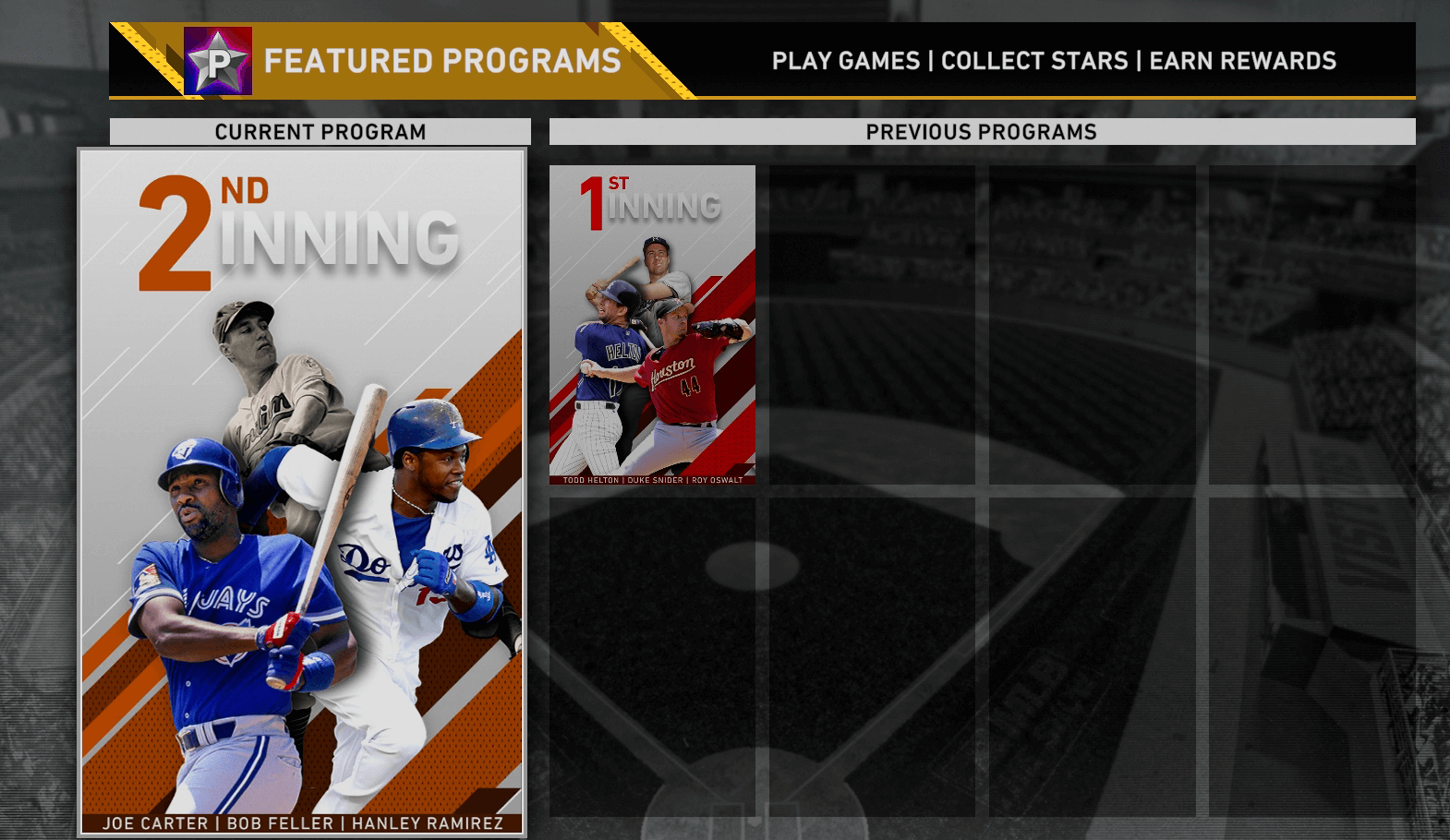 The First Inning Program has wrapped up, and so the launch of the Second Inning Program in MLB The Show 20 now begins. Within Diamond Dynasty, you will be trying to get to the usual 300 stars to unlock one of three bosses: diamond Hanley Ramirez, diamond Joe Carter and diamond Bob Feller. With that in mind, consider this a Second Inning Program guide of sorts.

That Hanley Ramirez card in particular is an old favorite within the community, so I would suspect that might be the most popular choice as of right now. In order to get to 300 stars (and beyond), you’ll have a variety of options at your disposal. Let’s go through them now.

The entry fee is 500 Stubs like last time. The final boss is Bob Feller. However, your first draft pick will be one of the three legend bosses, so if you pick Bob Feller then, the final boss (at least the time I tried it) was Ken Giles. Tactically, it might be worth picking Bob Feller in the draft as a closer is much easier to face than a starter in the Final Showdown.

Along the way to the Final Showdown, you can pick up 15 runs (as expected) and a Silver player pack. To break “even” on a run you basically have to beat the first Showdown boss — that boss will vary run to run. If you beat the Showdown, you get a Gold player pack and 70 program stars. 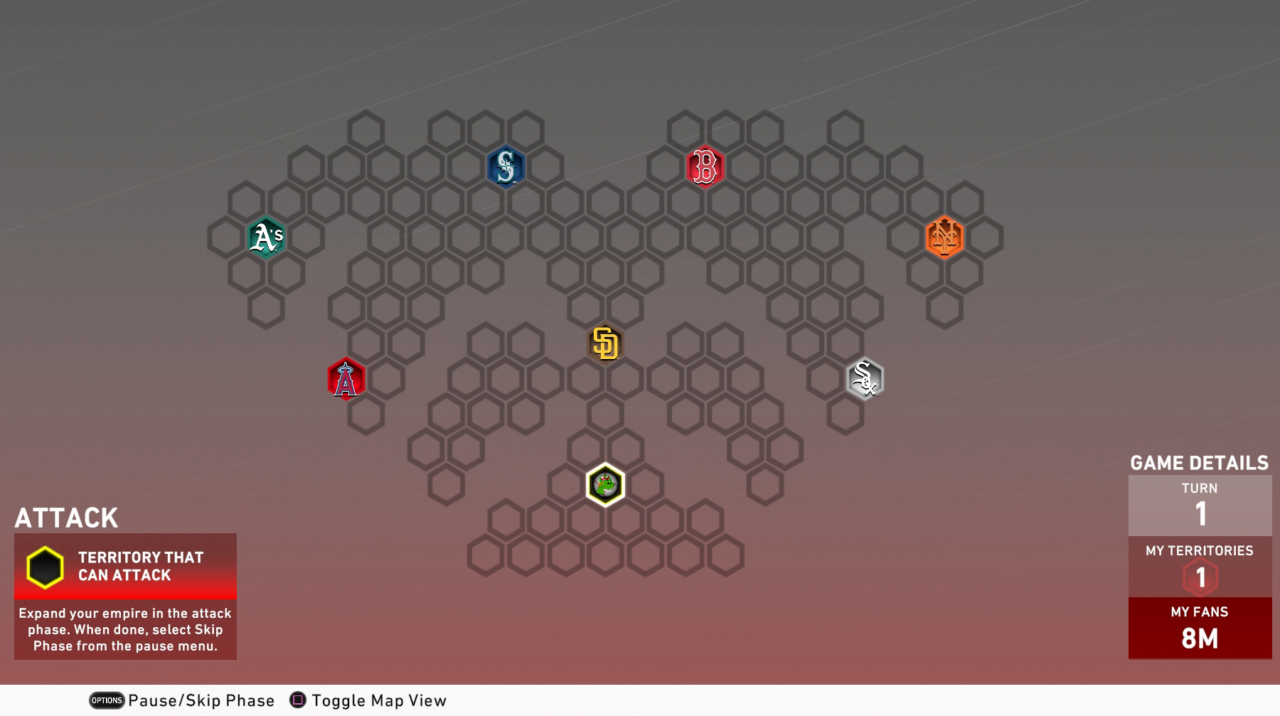 The Conquest map is not very noteworthy (at least when it comes to non-hidden rewards). You will need to win a minimum of seven games to take all the territories. You also need to steal two million fans, so that’s at least one more game for a total of eight games to complete all the challenges. If you complete the map, you will get 30 program stars.

There are the two expected online challenges that will net you 15 program stars each.

Obviously, the most efficient way to get these 30 Stars is just win 10 games in Ranked Seasons as then it covers both elements. The third set of 15 stars ties into Face of the Franchise cards. 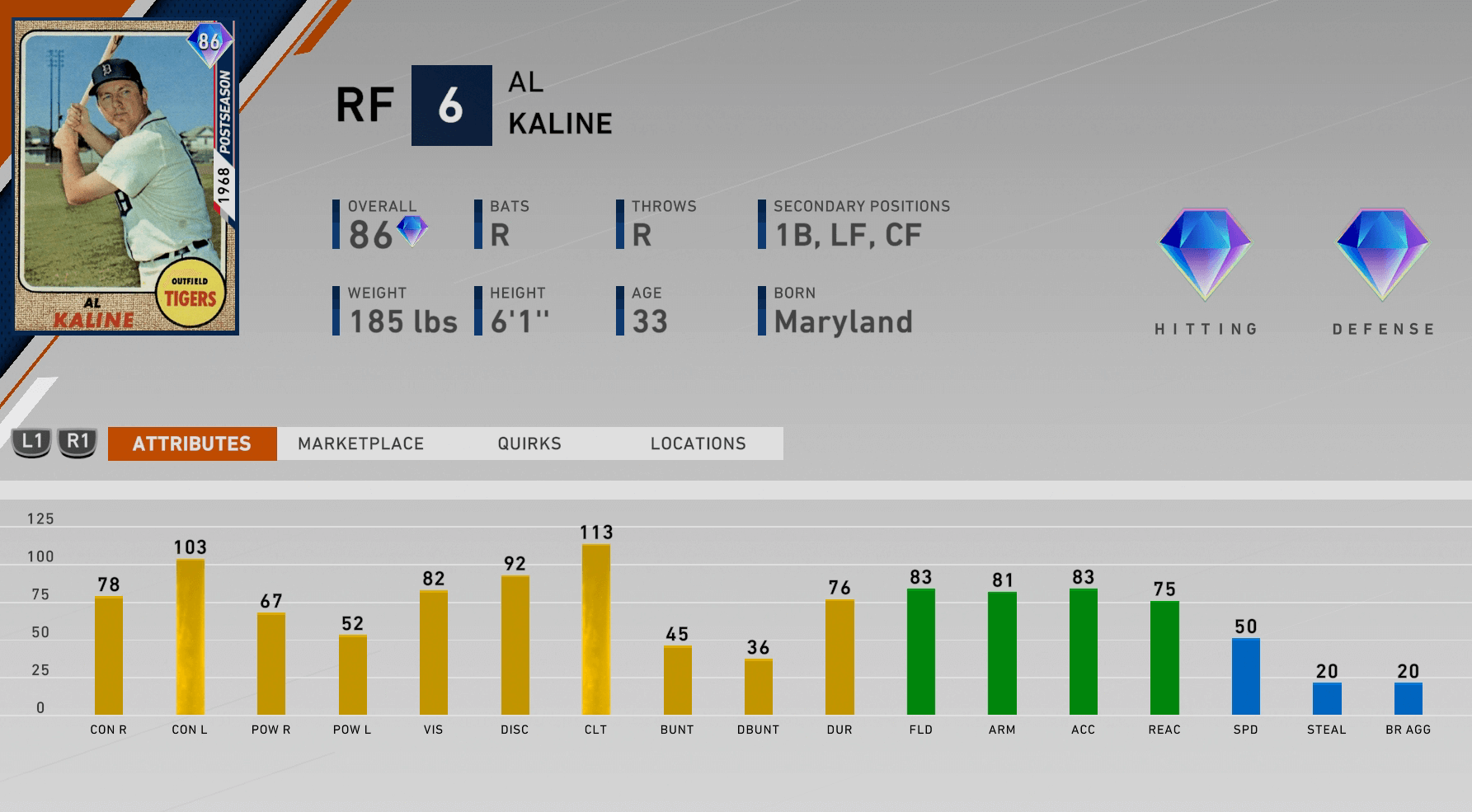 With all programs, you get a chance to lock in 75 Program Stars if you collected the three bosses from the previous program. So if you have Helton, Oswalt and Snider, you can lock them in for 75 Program Stars. If you have five Face of the Franchise players, that’s worth another 20 Program Stars. Lastly, Postseason Al Kaline is worth 20 Program Stars, and he is the first set of moments we have for the Second Inning Program. 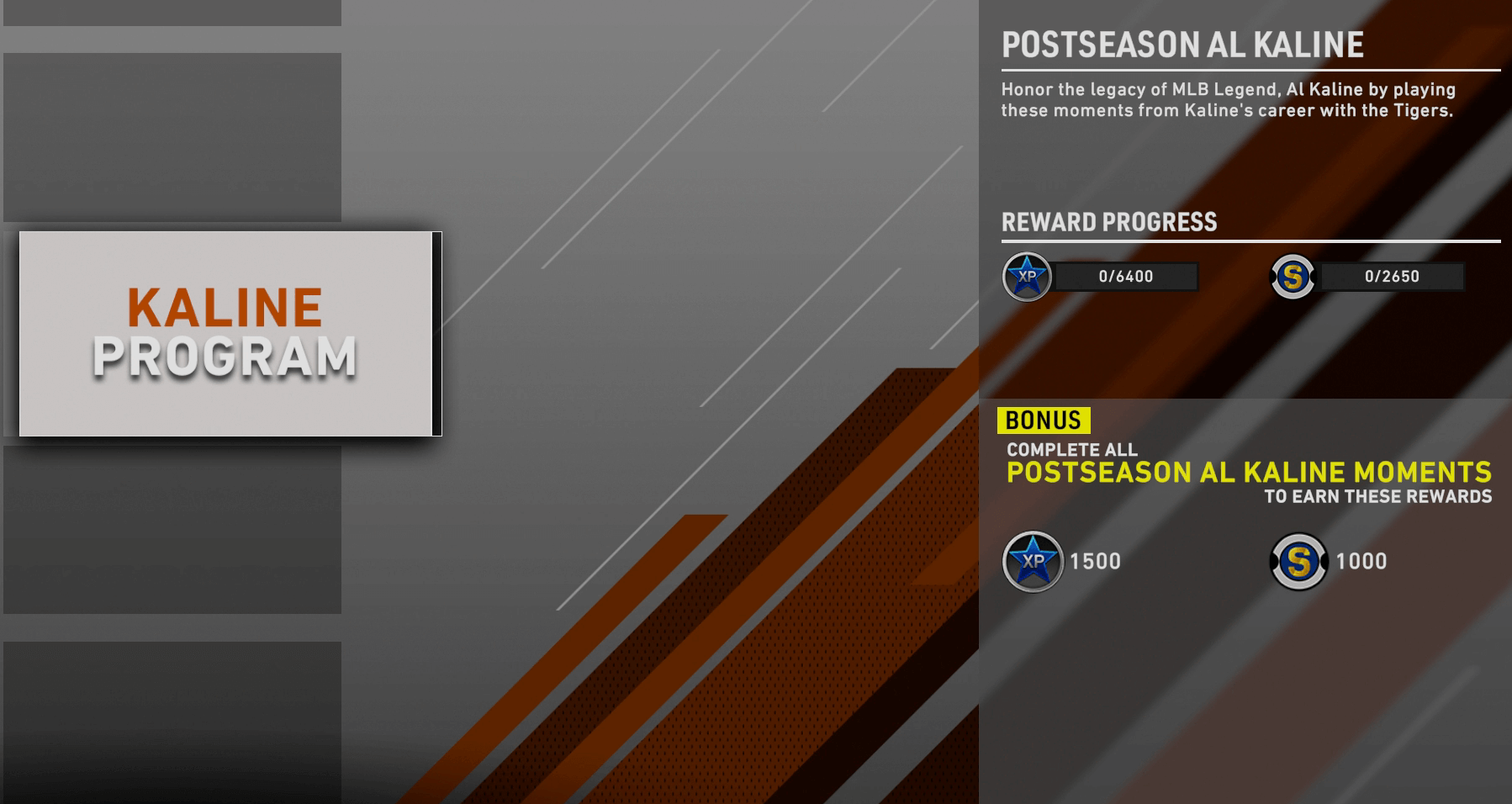 To get the Kaline, the math works out like the other Moments have been so far. In other words, you need to complete all the moments and then either beat the Tigers on All-Star difficulty, or do an online challenge. In this case, the online challenges are get 10 hits with outfielders or get 3 XBH with Tigers.

Here are the moments: 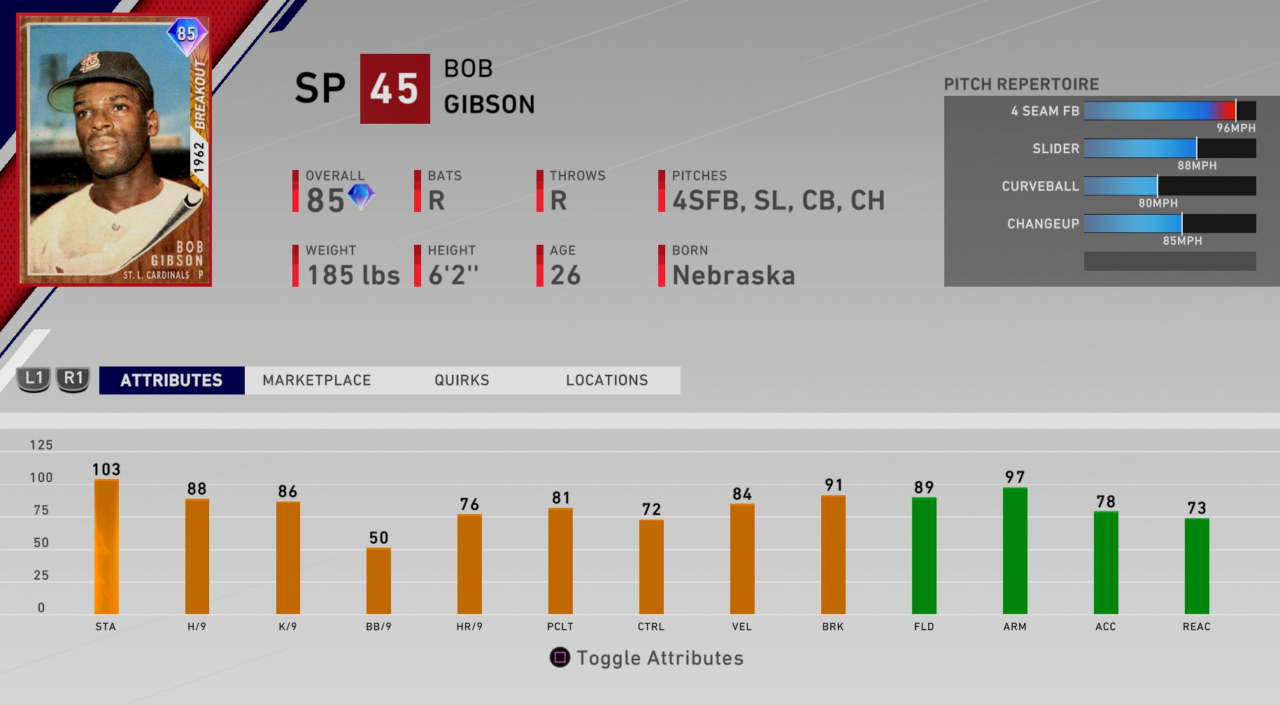 Bob Gibson is the second player added to this program. You can get a diamond Breakout Bob Gibson by doing moments and missions for him. 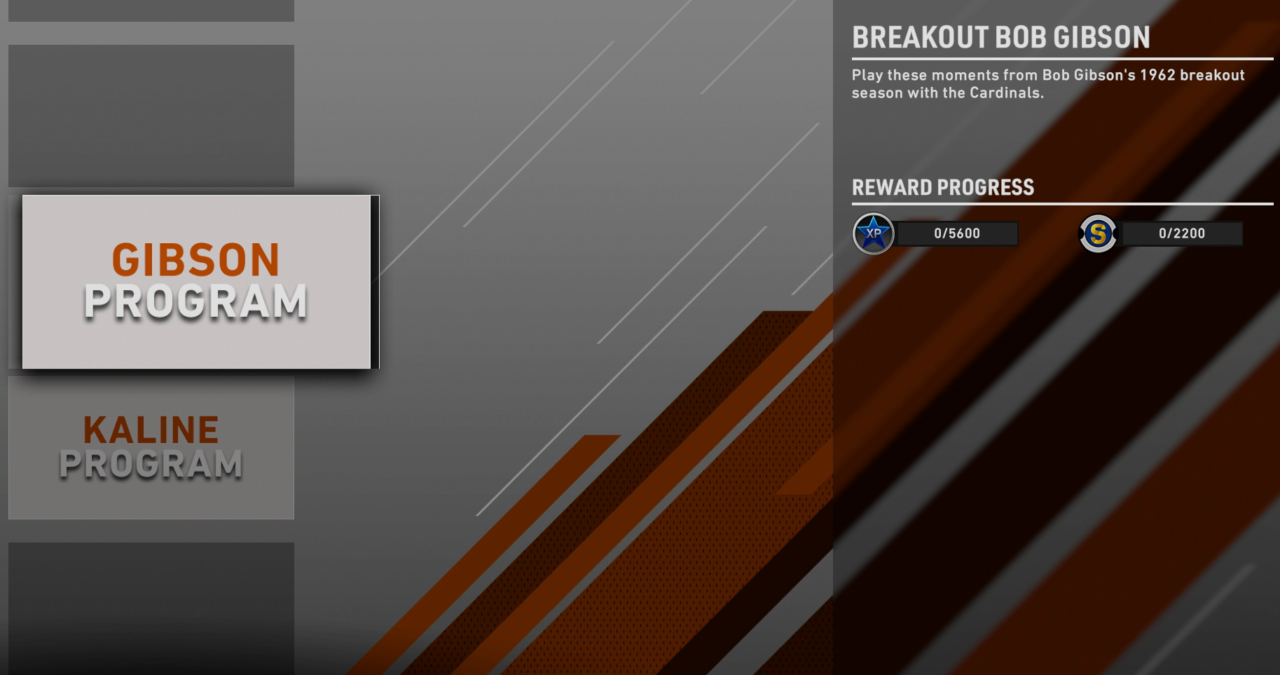 Here are the missions:

Once you collect Bob Gibson, you can get 40 program stars via: 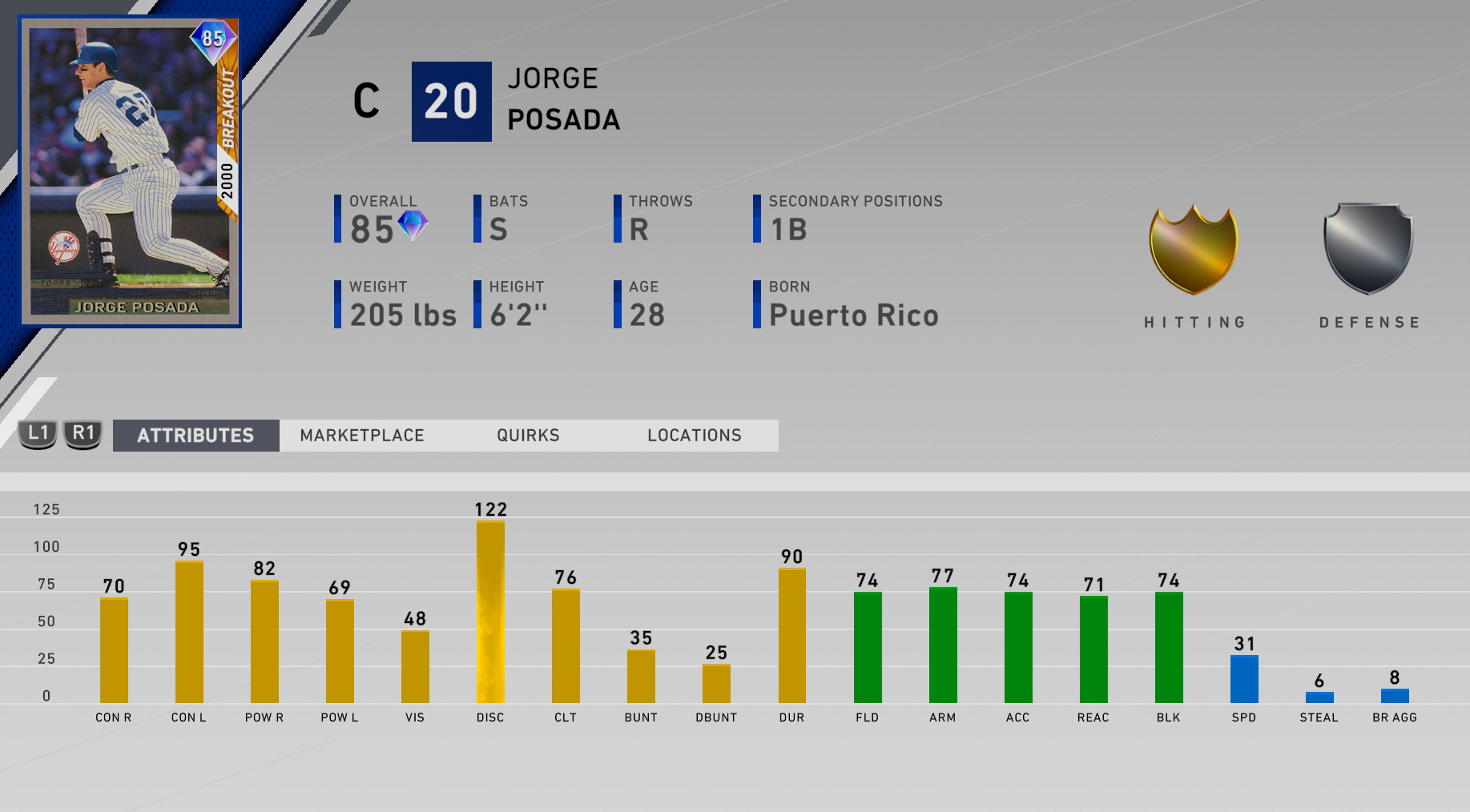 Jorge Posada is the third player added to the Second Inning Program. You get him by doing various missions and moments. 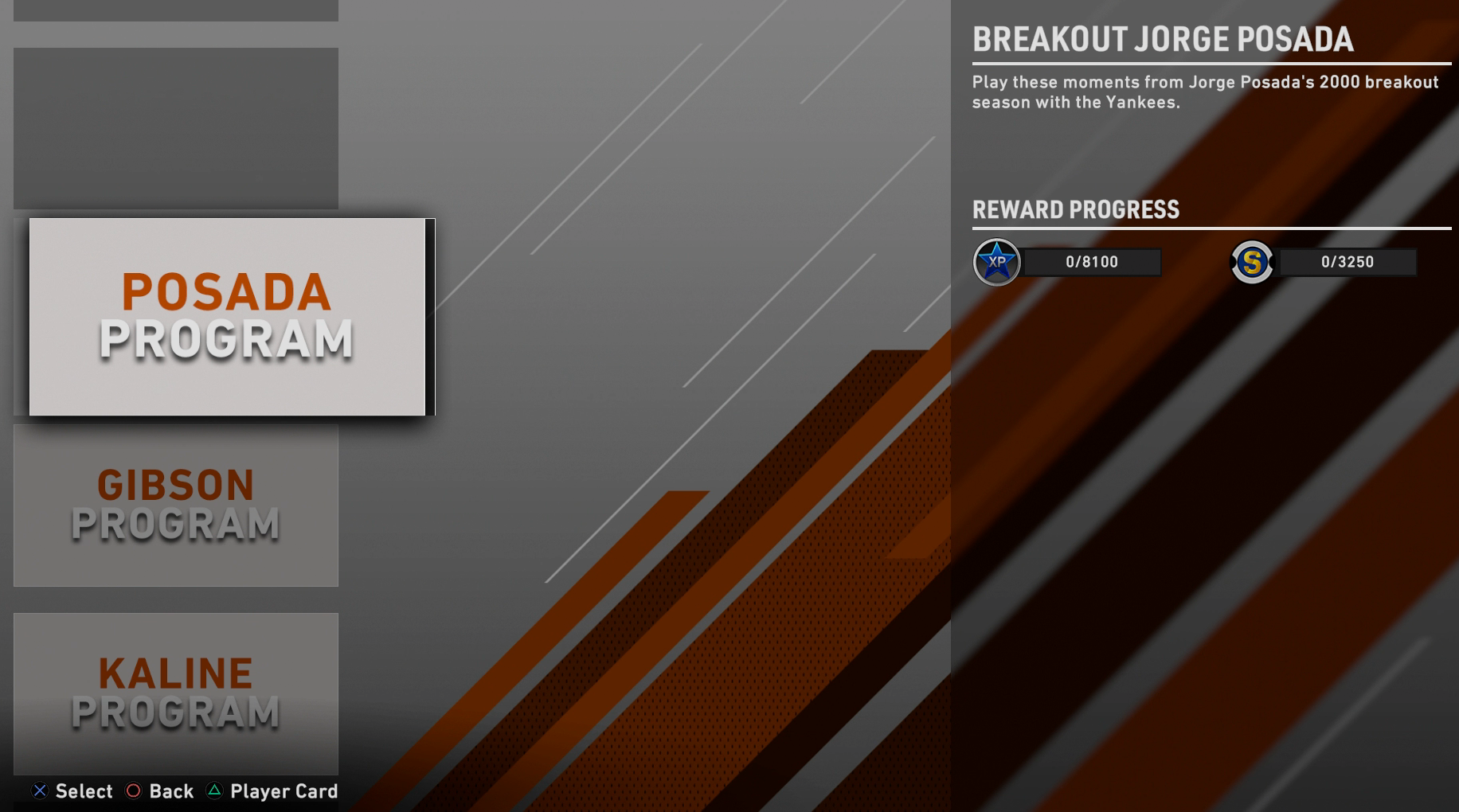 Doing all the moments will net you 42 of the 50 needed points to unlock Posada.

You can then get 40 program points by doing the following two missions:

Here are the three mini-bosses at 150 program stars in the Second Inning Program:

This program in total goes up to 600 program stars so far, well below the 1,000 stars from the First Inning. I’m not sure if that’s because so few people got above 600 stars in the last program, or if this program will be shorter, or maybe more stars will just be added later. Here are the main rewards:

Lastly, here is a look at the three Prestige bosses:

You will need to prestige these cards like the others, which is via online stat missions that will take major time commitments.