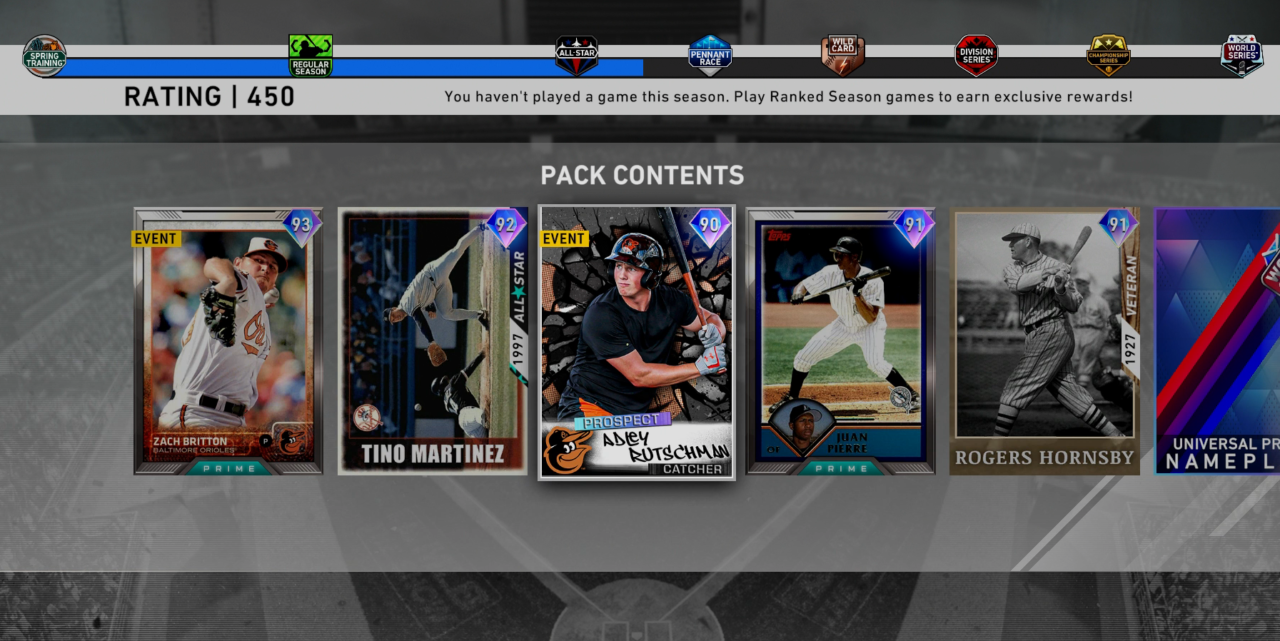 The first ranked seasons wrapped up today in MLB The Show 20 Diamond Dynasty, and so with Ranked Seasons 2 we get an infusion of new players and a ratings reset. To be specific, we get two new World Series player rewards and two new Pennant Race rewards. The new World Series rewards will be a diamond Tino Martinez and diamond Zack Britton. The new Pennant Race rewards will be gold Andruw Jones and gold Harmon Killebrew.

Not much changed between seasons as the developers are carrying over the players from Ranked Seasons 1 while simply adding the new players to the selection pool.

Andruw Jones will be a platoon option against left-handed pitching, and of course the Postseason Andruw Jones has very good fielding in center field.

Longtime Diamond Dynasty fixture Harmon Killebrew is also here with the expected power from both sides of the plate, and the usual devastating stats against left-handed pitching overall. Also, as usual, you will have to try to hide Breakout Harmon Killebrew in the field.

The All-Star Tino Martinez will be a monster against right-handed pitching, but I’m a little surprised the fielding isn’t a little stronger. He has 90 vision and quirks that should allow him to get the bat on the ball quite a bit as well.

The Zack Britton is one of our first Prime cards, and it’s also interesting history now since he has changed the spelling of his name from Zach Britton to Zack Britton in recent times. Britton was devastating in the game when he had this card, but it we’ll have to see if it translates to this version of The Show. I would suspect the sinker-slider combo will be very good, but only time will tell.

-I will be looking to get that Harmon Killebrew and Zack Britton in my rewards. Andruw Jones is a major platoon option only, and his batting stance is an acquired taste. That Zack Britton card was great for me, so I have to try and get him back to see how he looks this year.

-The rating system just “decays” rather than full-on resets between Seasons. So you don’t revert to zero MMR, you just go back a few ranks. In addition, if you just play one game at your starting rank, you’ll get the rewards for your division.

-It’s still a hitting frenzy at All-Star so be aware that it changes over to HOF pitching once you  and your opponent are both above 700 MMR (rating points).

-Fielding is frustrating right now, so try to keep your cool since everyone is going through it. It doesn’t make it okay, but if you’re prone to rage, maybe just stick with Events or single-player elements for now.