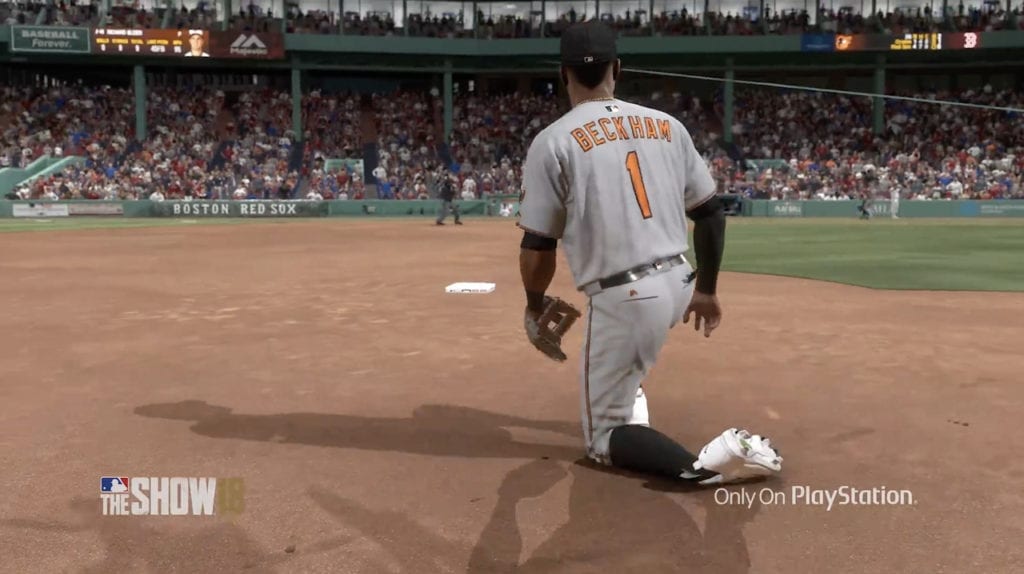 Baseball is finally back, and with it comes another solid entry in the MLB The Show series. All is well with the world. Here’s what is working and not working from a strictly gameplay perspective thus far.

Boy, SDS really delivered here. One of the main reasons I eventually had to quit MLB The Show 17 was the inexplicably bad tagging. I would gun guys out at the plate by a mile only to have the catcher fly around like a child on a trampoline and somehow miss tagging the runner. Would-be base stealers got the same treatment as the throw from my catcher would hit the second baseman’s glove with plenty of time to tag the baserunner with a speed rating of 63 speed, only to find that the defender would momentarily not only forget where he was, but forget why he was holding the ball in the first place and tag the runner only after the runner was already safe. But in MLB The Show 18? Tags are instantaneous. I tried stealing with Dale Murphy and his 73 speed only to get gunned by Matt Wieters and a professional-grade tag from Daniel Murphy. I really wanted that stolen base to complete Dale Murphy’s Conquest mission (spoiler alert), but I will happily sacrifice it for a season of blissful and frustration-free tagging.

I wrote about it at length during this week’s roundtable, so I’ll keep it short. Hitting is the best it has been in a long time. Hits are extremely varied, the Plate Coverage Indicator (PCI) works marvelously and allows players to meaningfully go after outside pitches that would have been easy outs in ’17. It takes a bit to familiarize yourself, but utilizing the PCI and timing pitches perfectly will result in a variety of outcomes that truly reflect your player’s attributes. It is a triumph this year, especially when punishments for early count aggressive hitting are reduced.

How many of your low pitches somehow sailed by your elite defensive catcher all the way to the backstop in ’17? It felt like an epidemic, leaving players in expletive-laden disbelief as the occasional game-winning run came to the plate on a strategic slider that purposefully missed the outside corner by two inches. I have experienced only one (!) passed ball due to me completely missing the accuracy button press in my pitching interface. However, it did not yield the game-winning run, and I was reminded of how gratifying it is that the passed ball epidemic is more of an antiquated illness than scary doom virus at this juncture. This is particularly important as the outside of the zone is paramount to pitching strategies, and MLB The Show 18 feels like a much more realistic reflection of real-life catcher performance.

A very small note but a very appreciated one. My game is always set to Fast Play to get me as much baseball as possible. And, simply, the in-game experience feels faster than ’17 (unless you’re hitting against, say, Daniel Mengden).

For all of the unadulterated joy from hitting and baserunning, The Show 18 sure does a good job deflating its own balloon with what we can only imagine is a soon-to-be-patched vast array of unnecessary fielding errors. Wide throws on easy ground balls are dangerously too frequent (from excellent fielders too), and just about every player on my Diamond Dynasty squad has dropped a ball they should not have. These ill-timed drops are often partnered with comically slow recovery times as well, allowing the baserunner to make it to the base safely amid nonexistent effort from the offending defender. While anyone can appreciate the higher frequency of errors to make the game feel more fluid and lifelike, they simply occur way too frequently at times when they should not be occurring, such as a cut-off throw routinely sailing past its target when there is no play to be made.

And I mean slam. I ripped a ball with (spoiler alert) Breakout Chris Carter that had an exit velocity of 106 MPH that hit the pitcher square in the head. He crumbled to the ground and digital Matt Vasgersian made it sound dire. But no trainers came out. No one looked concerned or even checked on the poor hurler. To make matters worse, he was up and pitching again to the next batter as if his best-case scenario concussion was merely a gentle sneeze. Batted balls still strike the pitcher, though less often, but the fact that quite literally nothing happens after a scenario that derails careers unfolds is something that needs to be fixed.