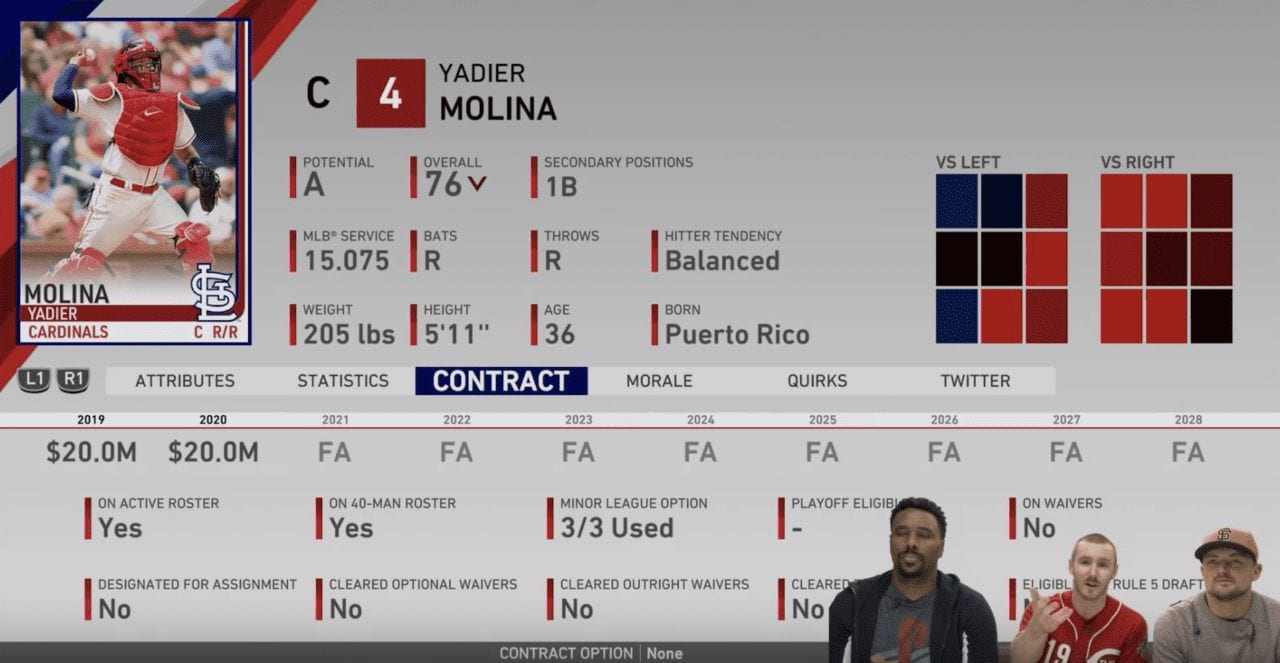 Much has been said in recent months regarding San Diego Studio’s perceived lack of focus on design improvements for franchise mode in MLB The Show. Many community members have clamored for an overhaul in recent years, only to see incremental improvements on a year-to-year basis. According to two of the more senior designers working on the game, the goal is to present a user experience in a more holistic package rather than staging each mode on its own island.

“We are challenging ourselves not to compartmentalize the way we talk about MLB The Show,” said Nick Livingston, lead game designer on MLB The Show 19. “We want to understand the gamer, the person we’re trying to serve.”

For that reason, March to October was a big addition this year and was specifically targeted to users looking for a more simplified experience. According to John Livingston, senior narrative designer — and, yes, Nick’s brother — March to October will bring a level of fun and ease to what can be a complex, burdensome MLB season experience.

“I wanted to give users a curated season experience that’s fun and exciting,” Livingston said. “–Provide something that wasn’t so daunting.”

Livingston believes that franchise mode can be a very cumbersome experience and overwhelming for the casual gamer. He said for most users, playing 162 games will take a long, long time. While simulating some or all of the experience is an alternative, Livingston holds the view that it entirely takes the control away from the user.

“I wanted to put the control totally in the player’s hands [where] their play is going to decide the outcome of their season,” Livingston stated.

March to October represents a big addition to the MLB The Show suite of modes. That being said, it doesn’t necessarily reflect a shift in thinking by the San Diego Studio team as far as what the future may hold for franchise mode and offline gaming.

According to Nick Livingston, the misnomer being thrown around that San Diego Studio has shifted to a money-hungry focus, thus strictly feeding the Diamond Dynasty community, couldn’t be further from the truth.

“I read Operations Sports. I read all 26-plus pages from last night’s stream,” Livingston said. “I’m very in-touch with the Operation Sports community. I see a lot of the discussions back and forth, feeling like we’re money motivated and we’re not. We’re not at all, and it’s not a consideration.”

He pointed to the improvements made across the board to evidence his point.

Livingston also emphasized that there is currently a misconception that San Diego Studio is turning into some data-driven machine that only caters to raw numbers. He strongly believes innovation is a broad spectrum, and is created and curated in a number of different ways.

“We lean as much on — interviewing specific fans as we do metadata about how many fans are playing what,” Livingston said. “We don’t even weight data any higher than our understanding of being in touch with what feedback we see from fans on the internet or our own personal goals from innovating the game.”

That being said, the data may surprise you.

“People underestimate the amount of players that play Road to the Show regularly,” Livingston stated. “Road to the Show is the majority of users. The other substantial groups are Diamond Dynasty and franchise mode.”

But franchise mode took some significant steps forward this year. For the first time ever, contracts for active MLB players will now have accurate average annual values (AAV). Dollar figures for players will be accurately representative of real life. Back-loading and front-loading contracts, as well as midseason contract extensions, are now a reality. For the user pleading for a more immersive GM experience, these are massive steps forward to bring an even truer simulation experience to franchise mode.

“This is something franchise players care a lot about,” Livingston said. “If I’m playing the role of GM, everything just got way more realistic now that those tools — are at my fingertips.” 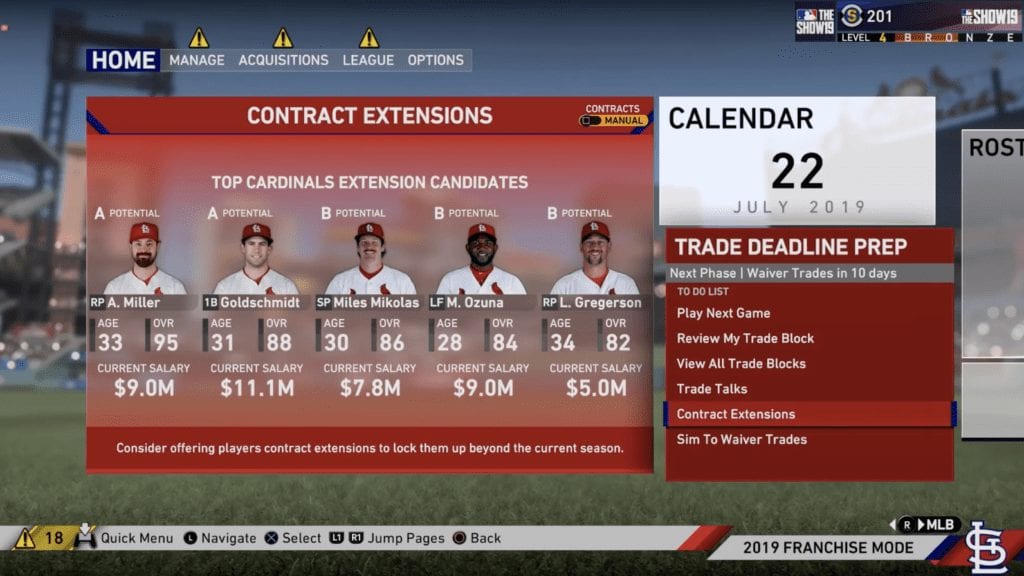 The landscape of MLB The Show is changing. Gone are the days of singular modes designed to be played by their lonesome. Designers at San Diego Studio want MLB The Show to become a living, breathing ecosystem where any and all game modes coincide with one another. Anything a user experiences in-game should supply crossover to other pieces of the package as a whole.

That statement breeds the question, what exactly is the future of franchise mode as traditional gamers know it?

“I would really answer that question differently depending on the person I’m talking to,” Livingston said. “Right now it’s a set of knobs and levers in a simulation baseball environment. We certainly don’t want to lose those aspects. We don’t want to lose that flexibility. We want to continue to innovate the game and how you do those things.

’What is franchise mode?’ is a question that we know that people have very different answers to,” Livingston said. “There’s a long list of stuff we want to improve, but this year we were finally able to get over some hurdles to make [contract improvements] happen.”