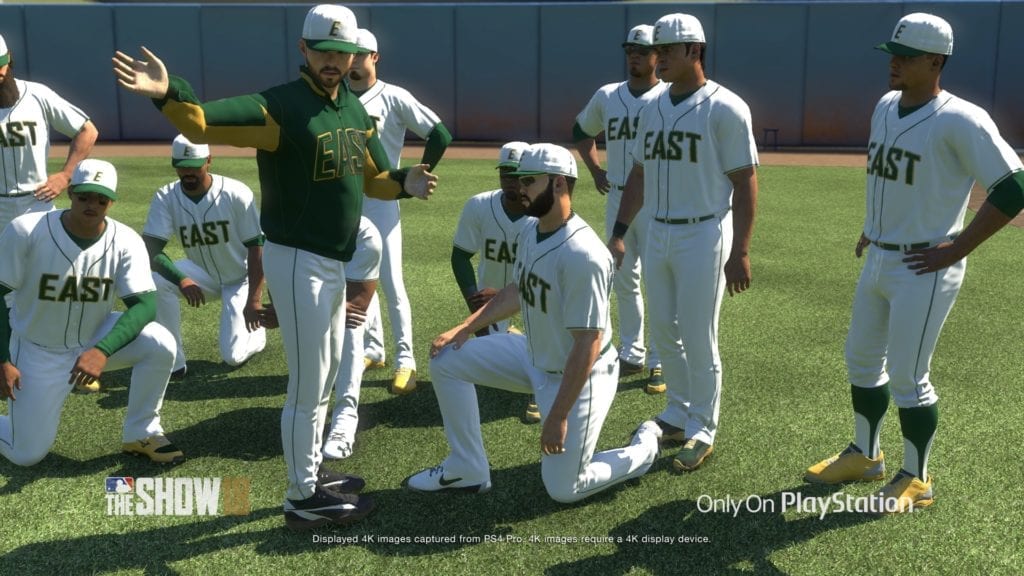 It took longer than I expected, but I finally ended my relationship with Diamond Dynasty. It went better than I thought it would. We had some great times together, but it was simply time for me to move on. I caught up with an old friend, Road to the Show, and I’ve been pretty happy.

But there have been some issues that have limited the mode. My recommendations to improve it come in three categories: easy ideas that can be brought in with a patch, intermediate ideas that could be implemented by MLB The Show 19, and big ideas that might take a few years of tinkering.

THE ABILITY TO PICK YOUR TEAM

This one is pretty self-explanatory. I’m a die-hard Houston Astros fan, but I went to a slew of non-contending teams in my four drafts. What if I wanted to start my career for my hometown team and work my way through our crowded minors? Getting selected to a random team is fun and all, but how long would I have to sim those drafts before the Astros eventually drafted me? It felt very odd to not have this choice.

Fixes to retired players were showcased as an updated feature before the game was released. And, yes, it’s nice to see that some top prospects and superstars aren’t hanging up their cleats due to issues with the algorithm, but there are still a number of players who are retiring that shouldn’t. Sure, C.C. Sabathia for age makes sense (though Adrian Beltre for age did not), but J.A. Happ, Rajai Davis, Alex Gordon, and Rogelio Armenteros (to name a few) due to ability does not.

I (regrettably) get it (but hate it) in Diamond Dynasty, but why have this persist in an offline mode? I keep squaring up early count fastballs only to have them roll gently to the shortstop or softly pop out. Let’s patch this problem.

Alright, I was not a fan of these. I did my best to re-create myself in beautiful digital form (yet somehow came out of the experience more handsome and in better shape) with my own on-field tendencies. However, the best-fitting option was the Jeff Bagwell (my hero) prototype, and that clashed with my desired position (2B). I got moved to 3B because of my player prototype, and suddenly it became my primary position. It really should be the other way around, and my player even got benched for requesting to be moved back to 2B. Trevor Story and Francisco Lindor are very different players. The forced positional limit felt bizarre given that player prototypes could apply to a multitude of positions

The entire showcase system befuddled me. I had an okay showcase my first time out and was drafted in the 23rd round by the Texas Rangers. While I loved the “super late rounder” narrative, I did not want to play for my arch rival (barf), but only after the showcase did I discover the ability to go “back to school” and repeat the entire showcase system. What I found, purely by accidental discovery, is that not only could I beef up my player’s stats by doing this more than once, but also time did not progress. I went to college for three years (thinking I would be playing in 2020) and the MLB Draft showcase still took place in 2018. Players should either be made aware of this going into the mode or have the option to skip it and get the padded college attribute boosts.

GIVE PLAYERS THE ABILITY TO CALL THEIR AGENT

Throughout my career, my agent would occasionally call me out of the blue and check in. When I complained about my new forced position, my agent gave me vague reassurances that he and the organization heard my concerns, and that they would be sorted out in the future. Nothing really happened. The option to initiate conversations with my agent exists in other career modes, and fleshing out the mechanics of the option could be a complicated fix. But your agent could be an interesting avenue to pursue more storyline and customization opportunities.

I know very well that when I play, 0-1 pitches are outs almost every single time. There’s no way that I’m actually hitting .342 in that count, but that’s because The Show’s robust stats section fuses both player and CPU performance. Adding a quick option to break them out and compare them gives a better read on actual player performance.

REVAMP THE MINORS EXPERIENCE OR MAKE IT OPTIONAL

Don’t get me wrong, coming up through the minors is a thrilling aspect of the game, but I don’t want it to be 2020 in-game before I debut. I tore through Double A pitching, never got called up to Triple A, and watched as the rebuilding Pirates sputtered to a 100-loss season. A strong 2019 Spring Training elevated me to the Opening Day roster, but so many players retired or were traded that the Pirates looked so different than when I started with them. I’m a sucker for progressing through the minors, but I can only imagine that players with similar playthroughs were turned off by the seemingly endless minors experience. This could take a few years.

It felt like this year’s version was beginning to scratch the surface. So much goes on when players sim from appearance to appearance. Out of nowhere, the Pirates had Gleyber Torres, Trey Mancini, and Greg Bird, and my first knowledge of that came when I saw the starting lineups. Loading screens have been both helpful and not. Where do I stack up with other rookies or other second basemen? Can the league leaders be expanded past three or four to maybe 10 or 20? Notable team transactions would help as well. Sony San Diego definitely has some higher priorities, but upgrading loading screens to host a bounty of information about your player’s career could be greatly beneficial when so much time is simulated.

BUILD UP AND CELEBRATE MILESTONES

Suddenly, I was on the Pirates’ MLB roster. I did not receive any sort of notification. I played in some Spring Training games and figured that I would eventually be sent down, but I just stayed there. And I got my first big league hit via a sim. We’re not asking for fireworks and a five course meal, but there should be some sort of in-game notification for huge career milestones. Maybe they grow into something like franchise mode’s Critical Situations.