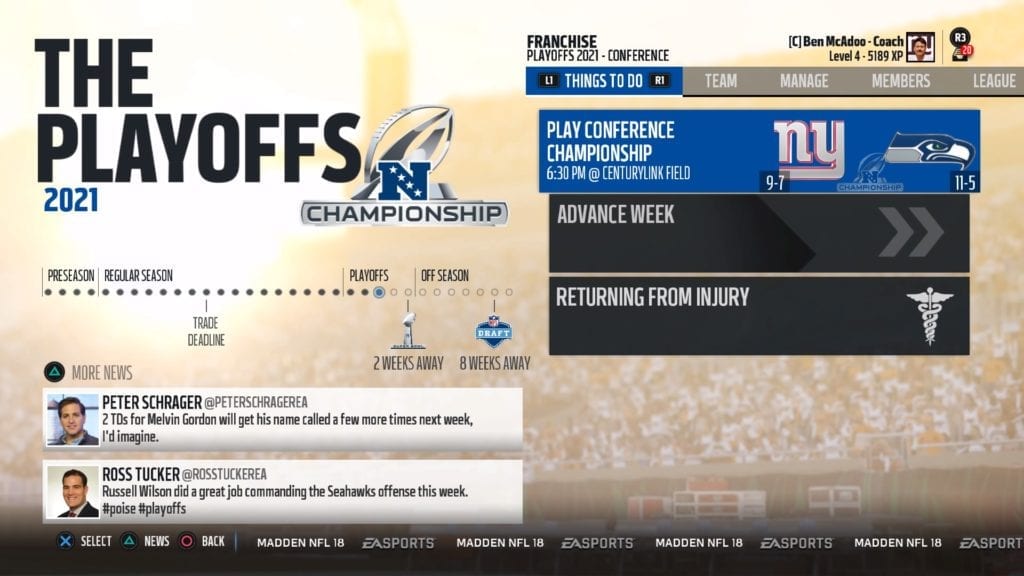 Sports games have a certain responsibility to perform regular upkeep on their game modes. There’s an unspoken agreement between a game’s developers and its fans that as long as people maintain their enthusiasm for a mode, it will then continue to update and evolve with each passing year as needed. Unfortunately, this hasn’t been the case with Madden’s Connected Franchise Mode. With a UI that’s largely been unchanged since 2013 and with few ground-breaking innovations in that time, CFM has fallen by the wayside as the more lucrative Madden Ultimate Team has continued to see the majority of EA’s attention. In the last few years, it’s as if the neglected CFM has gradually become like an overgrown backyard that’s desperately in need of a groundskeeper’s touch, or an overlooked room where the paint flaking off the walls is screaming out for a fresh coat.

For me, the frustration with the arrested development of CFM has reached new heights now with Madden 18, where there are few changes that will satisfy any hardcore franchise players that have been calling out for a more substantial overhaul for the last couple of years. That’s not to say Madden 18 doesn’t bring anything new to the table at all, but it’s obvious just how little time and effort went into improving the mode when so many of the points on Madden 18’s Franchise blog involve “tuning” various aspects of the mode rather than the implementation of anything new.

What Has Actually Changed…

When trying to place this year’s paltry CFM updates in order of importance, it becomes a little difficult to gauge which of them might actually excite fans the most. Surely, there are those who will be pleased with the opportunity to play a game in conjunction with the real-life NFL schedule and then jump into the season from that point on with their favorite team.

Or perhaps some will delight in the new customizable draft board that allows for placing your draft prospects in any order you like. It’s possible, albeit a littleobsessive, that there might even be someone out there who’s had their own personal CFM wish granted with the chance to make more preseason cuts or have their starters get more realistic playing time in those preseason games.

To be fair, one of this year’s best CFM additions is probably the mode-specific commentary from Brandon Gaudin and Charles Davis that continually references specific achievements in your franchise, such as when players have reached season or career milestones, or the duo will also provide a breakdown of the playoff picture and where your team stands within it.

There have also been some valuable adjustments to both player progression and regression that are designed to make for a more realistic experience in seeing players develop over multiple seasons and then have them fade out of the league fairly quickly to replicate the relatively short careers of the average NFL player.

Then there are those areas that have seen some attention this year but they just haven’t been changed quite enough to satisfy the lofty expectations of those that were hoping for more than just a tweak. Injuries, for instance, have been fine tuned this year on simulation to allow for more players to go down regularly but not necessarily miss a huge chunk of time.

It would be nice, however, to see more ambiguity when it comes to injuries, resulting in the kind of uncertain timetable for return that leads to the real-life designations of questionable, doubtful or out for players each week. It would also be nice to see more variety in the injuries. I haven’t once encountered plantar fasciitis or even your standard-issue burner. But I’ve seen a million bruised ribs.

Free agency is another franchise component that has grown increasingly stagnant, despite slight changes this year to prevent players from immediately accepting deals for far below what they’re actually worth. Other than that, it’s still the same old few periods of advancement that allow users to easily outbid the CPU for players or anyone to swoop in and make a winning bid right before advance in online franchises.

In order to make this process more realistic and challenging, there needs to be more cutthroat counter-bidding from CPU-controlled teams and free agents that are influenced by their own idiosyncratic personal desires of where they want to play. But some of this year’s updates designed to fix issues that have plagued CFM in the past seem to just flat out not work.

For instance, there’s been an attempt by EA to make position grades more accurately reflect the talent that’s on a roster. However, I experienced a situation where my team didn’t have a kicker on the roster but still somehow managed to score a “B-” grade at the position with the punter temporarily slotted in as kicker. Needless to say, that’s a pretty optimistic assessment of a considerably dire kicking situation. EA also claims that quarterbacks will no longer retire quite as early in their career as they did in the past, specifically mentioning how a 40-year old cover boy Tom Brady will no longer hang up his cleats after only one season, but that didn’t stop Eli Manning from retiring after the 2017 season in my franchise when that looks as if it’s entirely unlikely to happen in real life.

It would be one thing if these new tuning mishaps were merely an anomaly when it comes to CFM, but the truth is that it’s all right in line with an interface that’s so dusty at this point that it might as well be covered in cobwebs.

It doesn’t take long when navigating the familiar franchise menus to start seeing glitches rear their ugly heads. Whether it’s Odell Beckham lacking a stat line for his 2016 season or a cornerback depth chart that sees #3 inexplicably left blank and then insists on listing multiple #3’s when you try to rectify the error — there’s certainly no shortage of annoying hiccups and oversights that could easily be fixed if only EA were willing to devote the time and resources to do so. Aside from merely working out some of these persistent bugs, the real question facing EA when it comes to CFM is what they should really be focused on doing in order to significantly improve the mode going forward. It’s been suggested by creative director Rex Dickson that next year will finally be the one where they get around to the franchise overhaul that’s so badly needed (a move that’s supposedly been delayed in order to sync franchise features with NBA Live), so what are the areas where Madden’s CFM simply doesn’t measure up?

It must be said that there are components of its foundation that are perfectly serviceable, with last year’s addition of Play The Moments providing a welcome ability to breeze through games quickly while still offering the user enough control to feel as if you have impacted the outcome.

Madden’s CFM also boasts one of the more involving scouting and draft systems of any sports game, rewarding those who invest the time throughout the season to find the NFL’s next superstars while also allowing for some hidden gems to be unearthed in later rounds.

The biggest drawback of Madden 18’s CFM though still appears to be the total lack of exciting storylines from around the league to keep you invested and differentiate each year from the next.

There’s no league with as much inherent drama on a week-to-week basis as the NFL, so why are we not seeing that reflected in our franchises? As it is now, the main CFM menu will cycle through a few bland stories and tweets of what’s happening around the league. The only problem is that these will often be at least a week behind and leave you confused as to why people in the league are still talking about that loss you had last week when you just finished winning a game.

We should be provided with a much more detailed weekly breakdown of who’s playing well, who’s not, notable injuries, league leaders, highlights from other games and bonus points if they can package all of this and more into some sort of in-game show. This may sound like a lot to ask for, but imagine how much it would raise the bar for franchise modes if they were able to pull it off.

Setting aside any number of innovative ideas that could and should be implemented, some of the most necessary alterations to Madden’s CFM are purely cosmetic in nature. Those of us who pick up the game every year are simply tired of seeing the same old menus and screens within the mode while EA tries its best to convince us that even though everything looks the same, there’s been a lot of tinkering going on under the hood.

We have waited patiently while EA perennially puts CFM on the back burner in favor of other modes like MUT or this year’s story mode Longshot, and can only hope to be rewarded for our loyalty to the series by having our concerns and suggestions heard.

As we begin to look ahead to Madden NFL 19 and contemplate everything that we hope it will be, all of us out here in Franchise Nation should at least be unified in the same desire: We want this lawn mowed. We want these walls re-painted.

Be sure to leave your own thoughts on this year’s CFM in the comments!