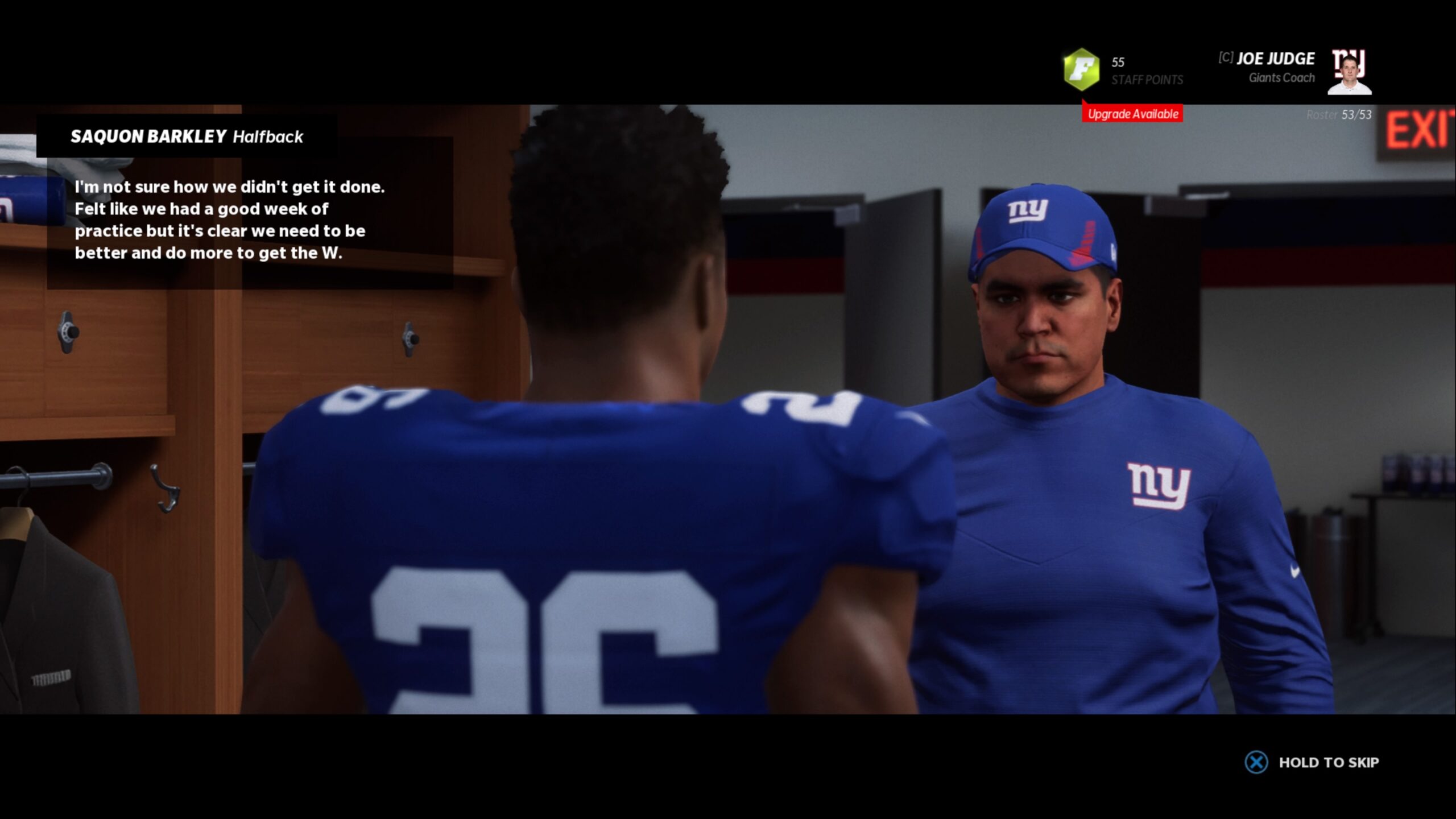 While franchise mode in Madden games had been stuck in a bit of a holding pattern in recent years without much in the way of new features or wrinkles, there was undoubtedly a shift that happened last year that provided some hope. With the community rallying behind the #FixMaddenFranchise hashtag on social media (inspired by our own contributor Brian Mazique), developers of the game were finally forced to take notice of the massive outcry and give some much-needed attention to the mode in the present and future, which started with Madden 21 and now leads us to Madden 22 franchise mode.

Of course, saying that there will be improvements and actually making those improvements are two very different things, so it’s completely understandable if you were still adopting a wait-and-see approach until it was evident just how much would change. But now that the wait is over and Madden 22 has been released, the time has now come to determine just how serious EA was about making big changes. We’re going to consider this a 1.0 review of sorts as we know the big scouting update in September is the next time we’ll really need to re-analyze Madden 22 franchise mode.

As someone who is the commissioner of a long-standing online franchise, I’m deeply invested in having meaningful changes made to the mode and have been encouraged by the ongoing discourse surrounding necessary improvements — and the fact that EA has invested some time and resources into accomplishing the goal. With that in mind, let’s go ahead and take a hard look at the current state of franchise mode in Madden 22 and scrutinize how much work has been put into making the entire experience better this year. This means analyzing what’s entirely new to the mode, what’s been improved or at least altered, and then also what’s still being overlooked or ignored at this point and could use further refining in future editions of Madden. 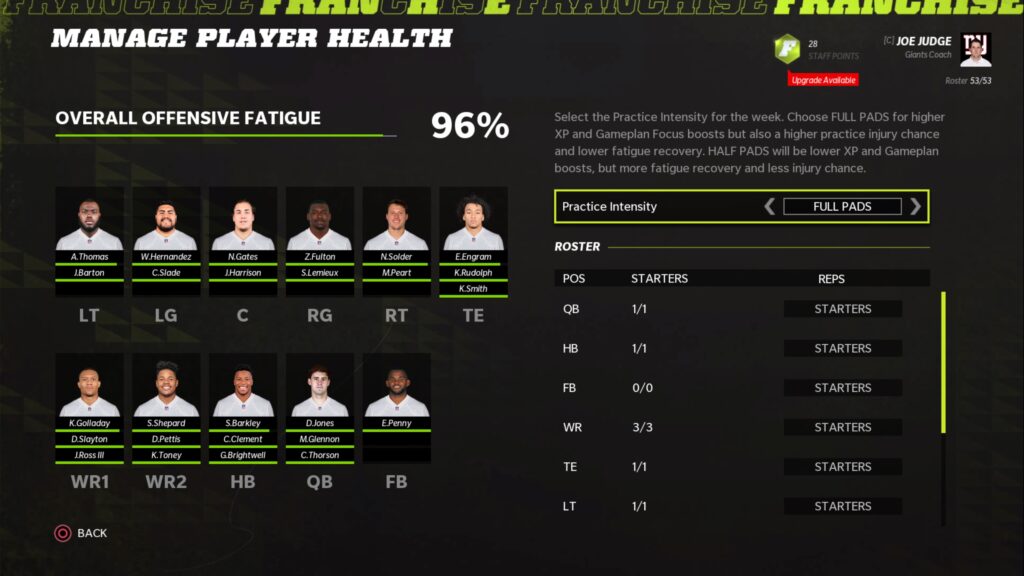 One way Madden 22 franchise mode tries to set itself apart from previous years is by overhauling the way that you prepare for each matchup during the season. Previously, you would select one drill each from offense or defense to help upgrade your players, and you would only get the maximum amount of XP should you perform well in the drill (though you could choose to sim the same drill in the future for max XP, provided you completed it without mistakes once in the past). The system wasn’t great, especially since it had been around long enough to have grown stale years ago, and it was more of a chore than any sort of realistic representation of strategic progression.

Instead, there’s now a game plan focus that you’ll need to set for both offense and defense, allowing you to choose priorities like the deep pass or the inside run. You’ll also need to worry about your players’ health when deciding if practices should be in full pads for maximum XP or half pads to minimize potential injuries in practice. Plus, you can also choose to give more reps to your starters or backups.

A new game-plan goal for each week can allow you to accumulate staff points (more on those later) for completing certain objectives during the game, such as getting 5+ sacks or racking up 350+ yards passing. With this new system, you can still engage in free practice with your team, but there’s now no need to ever actually participate in any drills.

Though this new pregame training method certainly offers something different and has you making some decisions regarding preparation as you head into a game, it’s not exactly a giant leap forward compared to how things were before. Aside from making the call on who participates in practices and whether or not they will include pads, the idea of setting your focus on deep passes or stopping inside runs isn’t really all that different from how you would select certain drills before. Therefore, that makes these changes fall a little short of anything game-changing. 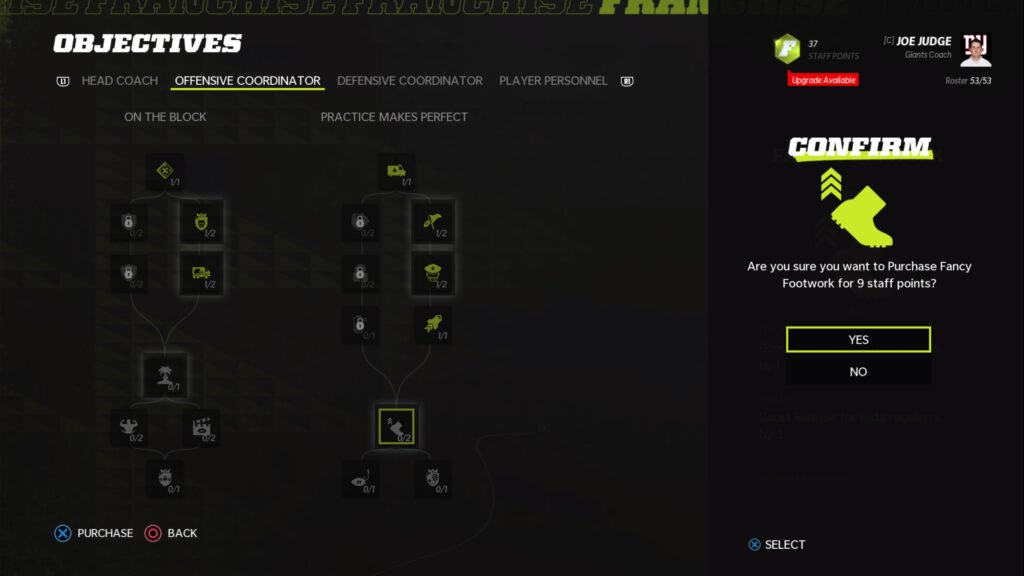 A new concept that’s been introduced in Madden 22‘s franchise mode is managing various members of your staff and using staff points that you earn throughout the season by completing objectives to add branches to their talent trees that will provide various bonuses and advantages. Depending on whether you’re adding to the talent tree of your head coach, offensive coordinator, defensive coordinator, or player personnel, you’ll be able to accomplish things like increasing XP earned for certain players, boosting specific attributes for some positions, and even increasing the likelihood of some free agents signing with your team in the offseason.

It’s a welcomed addition to the mode because it at least attempts to provide a realistic representation of the impact that coaches can have on a team. On top of that, there are a lot of valuable items throughout the talent trees that you can unlock to make sure your team has the best chance of success in their games. The worry here though, especially in online franchises, would be that all of these boosts and upgrades that you can earn by adding to the talent tree could eventually transform the game into one where whoever has unlocked the most things will have a massive advantage — ultimately determining more about what happens on the field than anyone’s skills on the sticks. 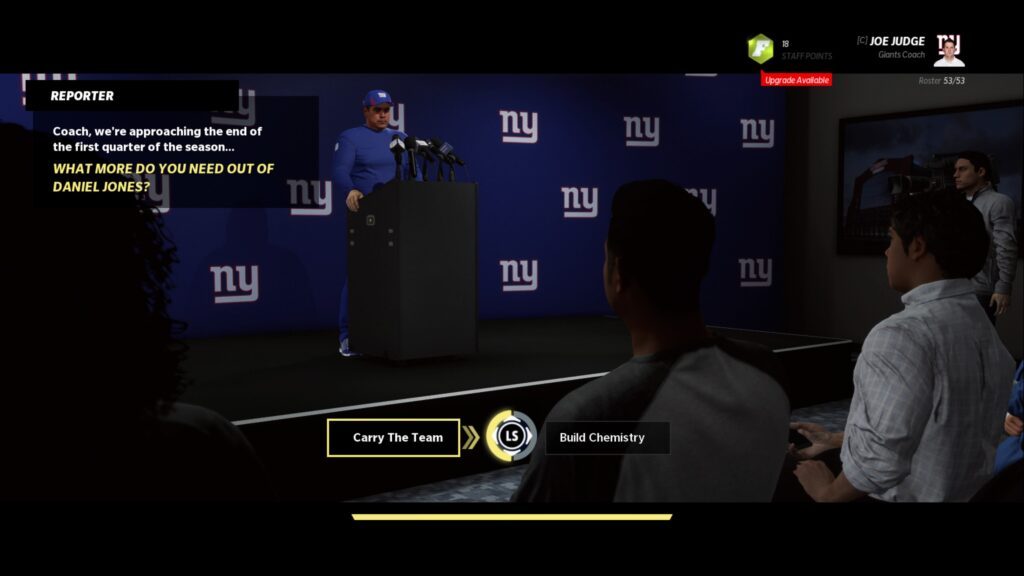 As someone who had grown to view the previous franchise home screen of your coach hanging out in his office as the very definition of throwing the entire franchise community an insignificant bone, it’s nice to see that the coach’s office is no more. In a way, you could view the new periodic press conferences and player/coach meetings that pop-up throughout the season as a form of an upgrade on the coach’s office. Instead of just seeing him sitting there doing nothing, now your coach will answer questions from the media and team concerning issues pertaining to anything from poor performance to early retirements of players to inclement weather in an upcoming game.

Though the simple this-or-that decisions you make in these interactions don’t seem to often have a massive tangible effect on your organization as a whole, they at least keep you a little more connected to the overall narrative of your season and are without question more dynamic than seeing a guy just sitting at a desk. 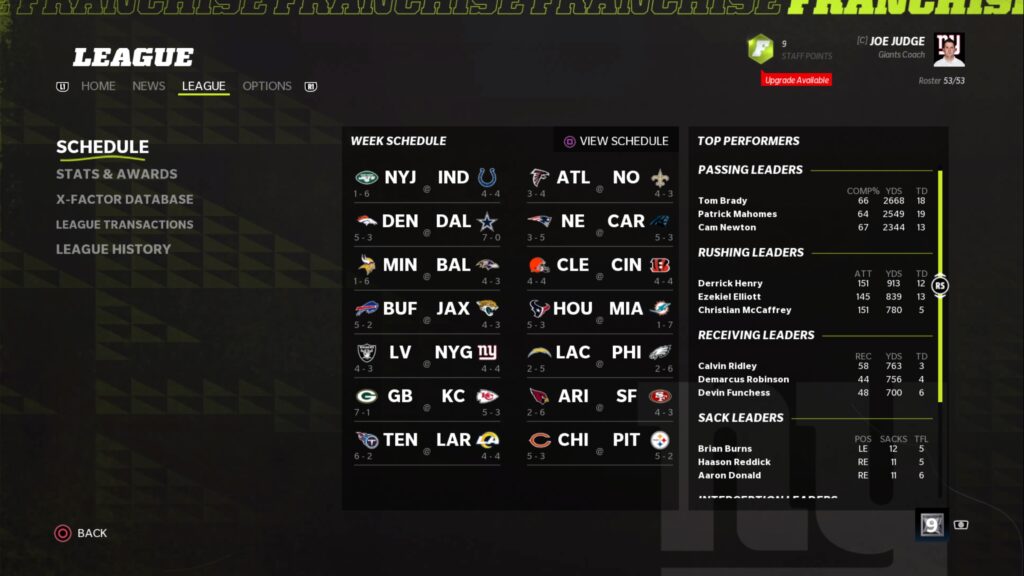 It may seem like more of a small cosmetic item compared to some of the other things mentioned here, but the addition of a couple of screens keeping you up-to-date on what’s going on around the league goes a long way towards staying connected to all of the stories happening in your franchise. This starts with a news feed that details all sorts of recent events, including scores of games, notable performances from players, and key injuries that might have occurred.

There’s now even a page that displays the week’s schedule and scores of any games that have already been played, saving you from having to seek this out from a menu like you had to in the past. You’ll also be able to see here who’s leading the league in a variety of statistical categories, so now you can see which players are having a stellar year and might be in the running for the MVP award at season’s end without needing to navigate and sort through all of these stats on your own.

If you’re disappointed to find that the methods used to scout draft prospects coming out of college are the same old tired ones that we’ve now grown accustomed to for years now, there’s still reason for optimism because a new and improved way of scouting is expected to be coming soon courtesy of a patch. It’s naturally not exactly ideal for franchises to deal with the existing framework until this new method is ready to be unveiled, but at least we know what we have now is merely temporary. 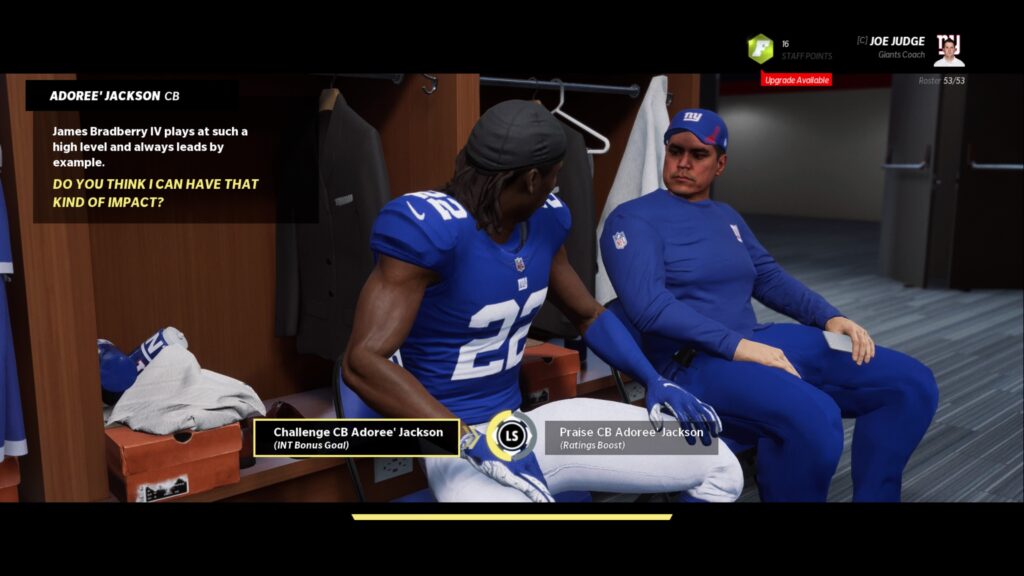 One thing that unfortunately has not changed within franchise mode is the way that you will periodically be presented with opportunities to upgrade the dev traits of a player, meaning that you can take a player who currently develops at one rate (star, for example) and then get them to develop at a better rate (superstar, for example) so they can then become a better player faster. The way that you achieve this upgrade is by accomplishing some sort of statistical goal in a game, which has always seemed counterintuitive to how improvement actually happens in real life in my opinion.

Though I’m sure there are some who prefer striving for and then being rewarded for meeting goals, it flies in the face of my own feeling that players will have a good game because they got better rather than them becoming better players because they had a good game — as it works now. It also becomes an even larger issue in online franchises where the elite players are more likely to regularly receive dev upgrades for their players, thus ensuring that the disparity between them and the lesser players grows even larger. 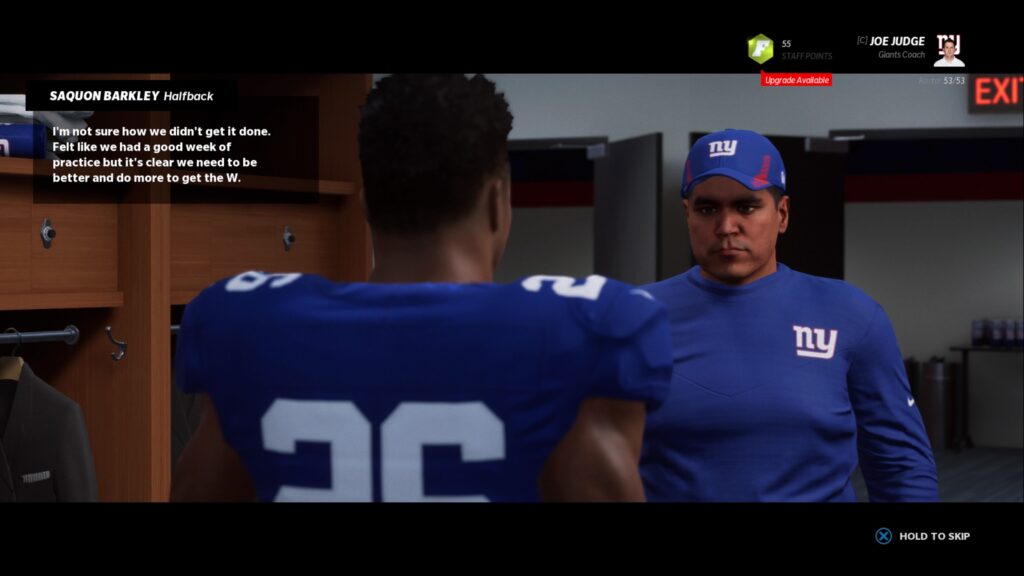 While it’s appreciated that EA heard the outcry of the #FixMaddenFranchise crowd and took steps to make improvements in areas that had obviously grown stagnant through neglect, the reality is that the mode was likely never going to be able to be completely fixed in just one game cycle. And though there are some signs here that the mode may be trending in the right direction, there are also still plenty of areas that could use attention beyond Madden 22.

This is hardly the kind of new coat of paint that has led to hollow upgrades like your coach sitting in his office, but it’s also not exactly the complete overhaul that many were clamoring for in the Madden community. The general layout and presentation has made some big strides this year. Still, some of the new ideas and mechanics introduced in Madden 22‘s franchise mode seem like they were really just a light massage of concepts that were already in place when more intensive and transformative work was needed to really make the mode feel like something entirely new and fresh.