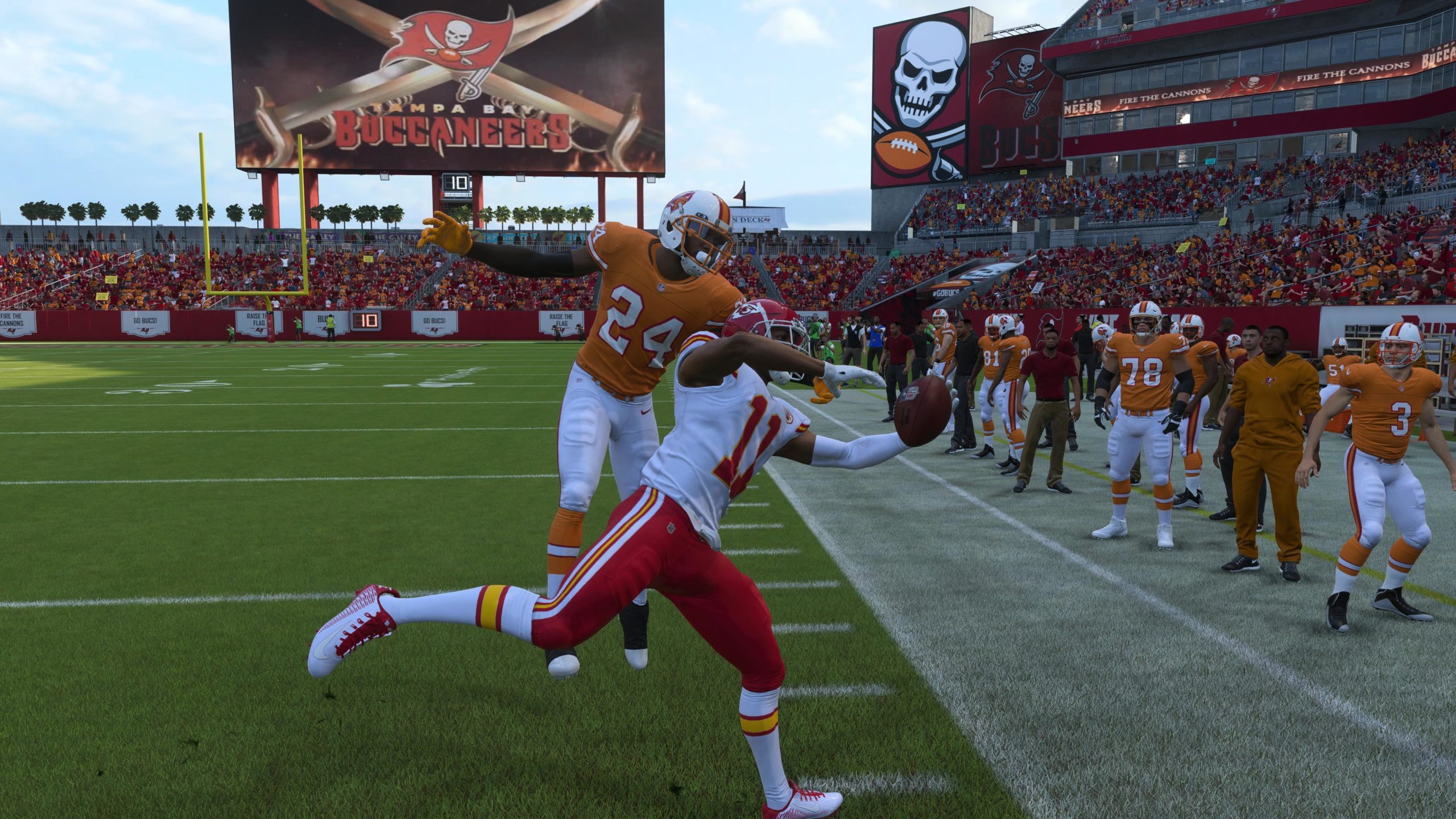 Last week, EA Sports dropped a patch for Madden 21. There were various fixes in it, but on next-gen consoles, the biggest point of interest was that it was supposed to address the secondary issues with the next-gen version of the game. These issues included secondary players looking lost on the field, and showing the aggressiveness and reactions of a sloth way too often. While the last-gen version of Madden had its own set of issues, they were nothing that were comparable to how inconsistent the secondary issues were on the PS5 and Series X versions.

For Series X and PS5 fans, the Madden 21 experience has been all over the place. Graphically, the game looks better and the player movement feels the best it has in a long time. I’ve even seen some folks say it’s the best player movement the series has ever produced.

I consider myself objectively centered when it comes to Madden, and I think that is important when looking at this franchise. There are a lot of things to like, and even love, about Madden from a fun perspective, and there is an equally decent amount to be frustrated about with this franchise in terms of progressing, delivering simulation-like components, and catering to all types of fans, and not just ones who are a better source of revenue. 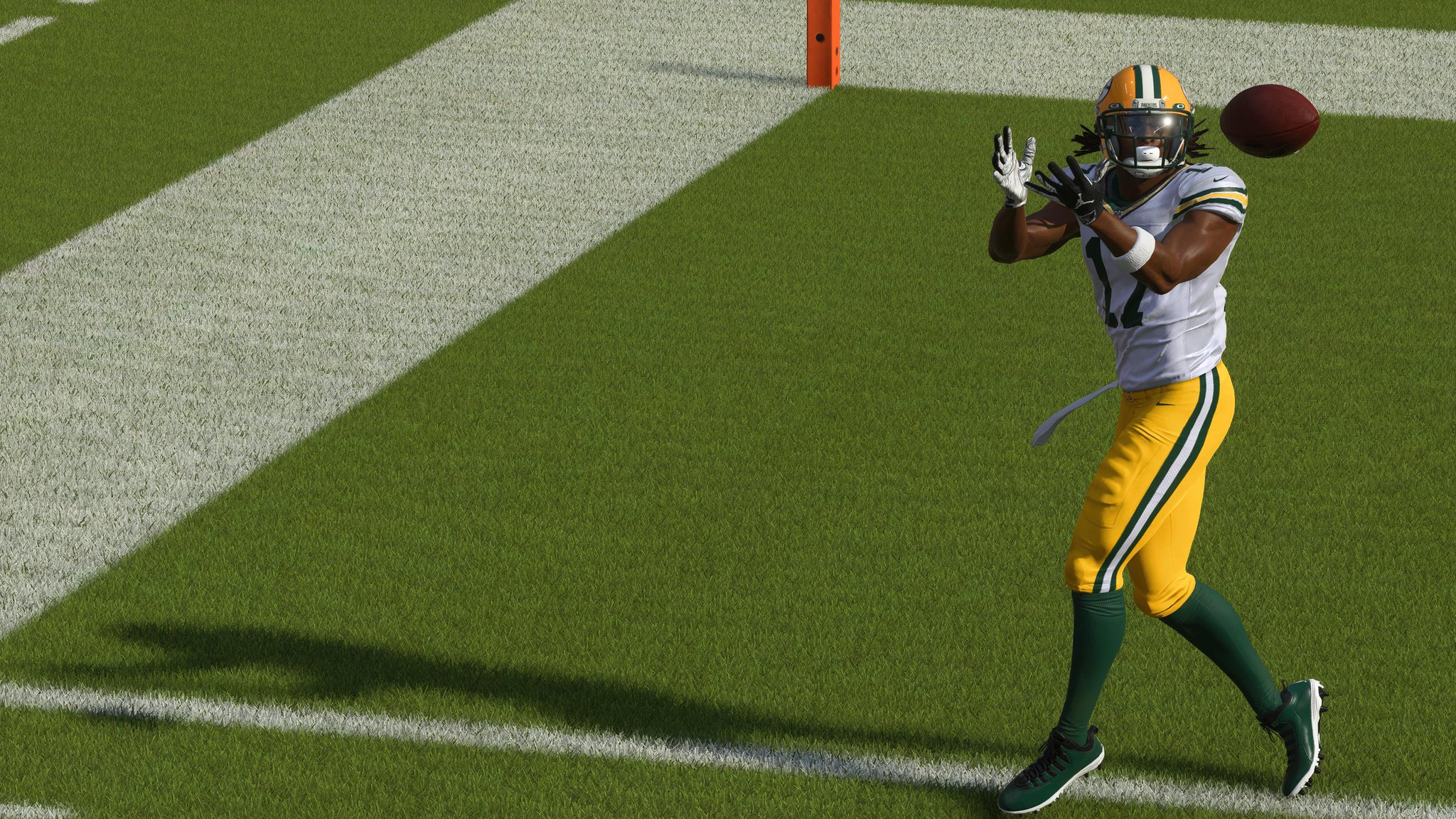 That said, the one area where opinions have been aligned since launch relates to the struggles of the defensive secondary on the next-gen consoles. There was simply a struggle to react in a consistent and uniform way that replicated what our eyes see on any given game day in real life.

There are always going to be variants at work, with player ratings, defensive play-calling, and skill combined with how the AI reacts, so mistakes, much like in the real game of football, are bound to take place. Those mistakes though shouldn’t be happening at the alarming rate of dysfunction that was currently happening before the most recent patch was released.

Now that the patch is out to help correct the struggles of the secondary, I can say that while we should not have needed to wait in the first place, it does appear after spending multiple hours with the game and testing the patch in multiple scenarios, that some help has arrived.

The biggest area of improvement, for me at least, is the reactionary phase of the defensive secondary in man-to-man defensive schemes. Too often I witnessed elite defenders looking lost on certain plays and moving about as if there was no thought coinciding with their actions. While many of us feel that is realistic in watching our favorite teams on Sunday, it’s probably not a good thing for a video game that loves to talk about being an NFL simulation.

Seeing the improved reaction of my defenders really is a game changer, and again, we shouldn’t have had to wait for this to be in the game. However, it is now, and it is a big step up in how the game plays out.

The wonderful Madden community had been scrambling to provide sliders that helped mitigate the issue and subsidize the lack of awareness from the start, but post-patch those slider sets are probably going to need to be tweaked, and that’s a good thing. 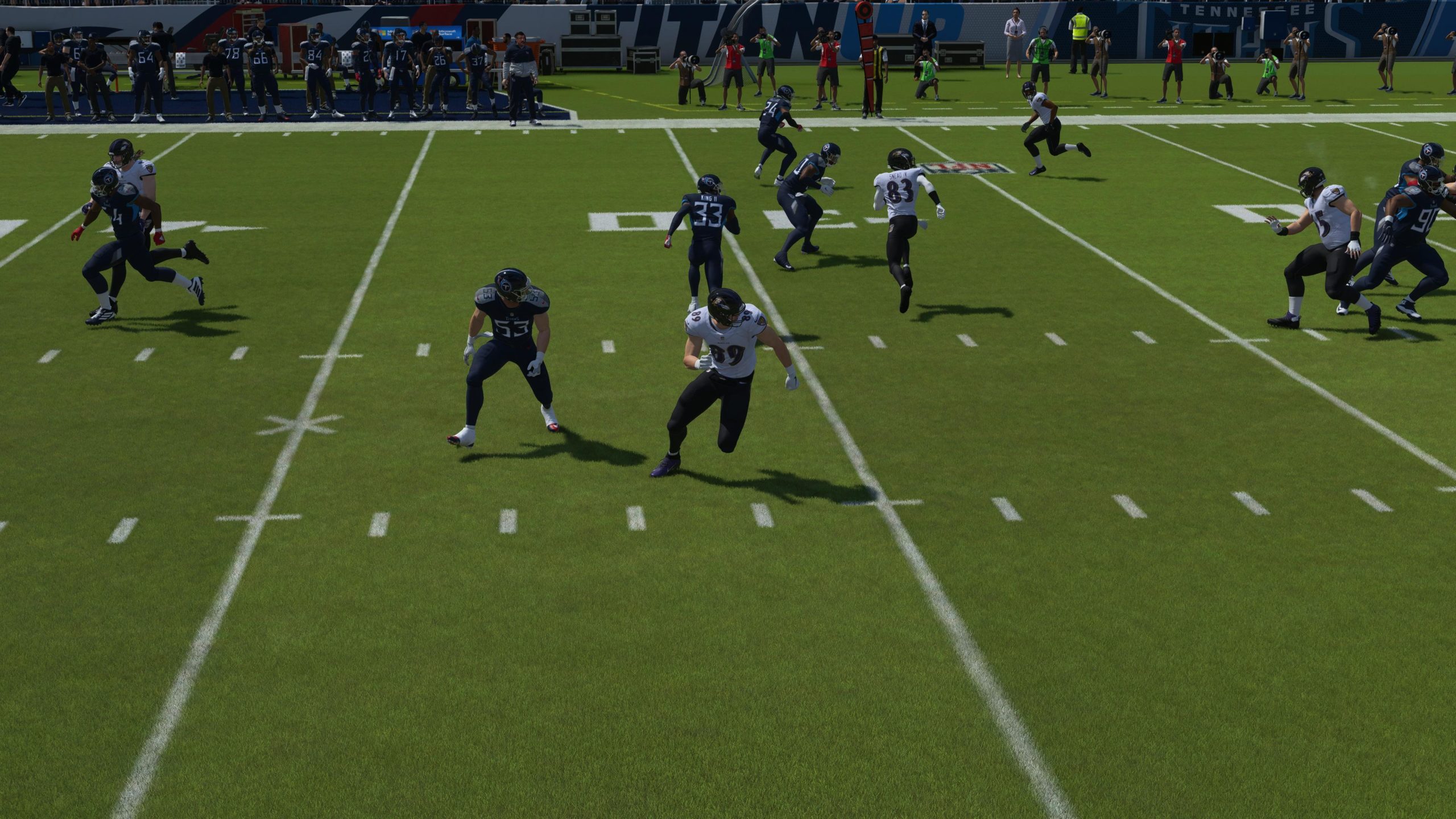 While it’s hard to describe without seeing it for yourself in motion, if you look at the screen capture provided above, you can basically notice the awareness and thought pattern of each secondary player based on where his eyes are looking. I can see real thought and realistic awareness taking place. Although the field may look chaotic at first glance, each defender understands what he is responsible for and is doing his best to accommodate the defensive scheme and play call.

This doesn’t mean that every receiver is covered like glue all the time. As I mentioned before, other facets such as skill, ratings, and the QB they are playing against are all still part of the equation. It simply means that each player looks and reacts in a more realistic fashion, and in a way that is believable to the users playing the game.

Not all is perfect after the patch though as there are still head-scratching moments where you see the AI defenders perform actions on the field that would get them or the defensive coordinator fired. In a standard Tampa Two, I witnessed the OLB — who was obviously set to cover any slants or dump-offs into the flat — take off to help cover a player who already had a cornerback and safety on him while leaving the running back and tight end all alone to roam on a wheel route and a crossing pattern. 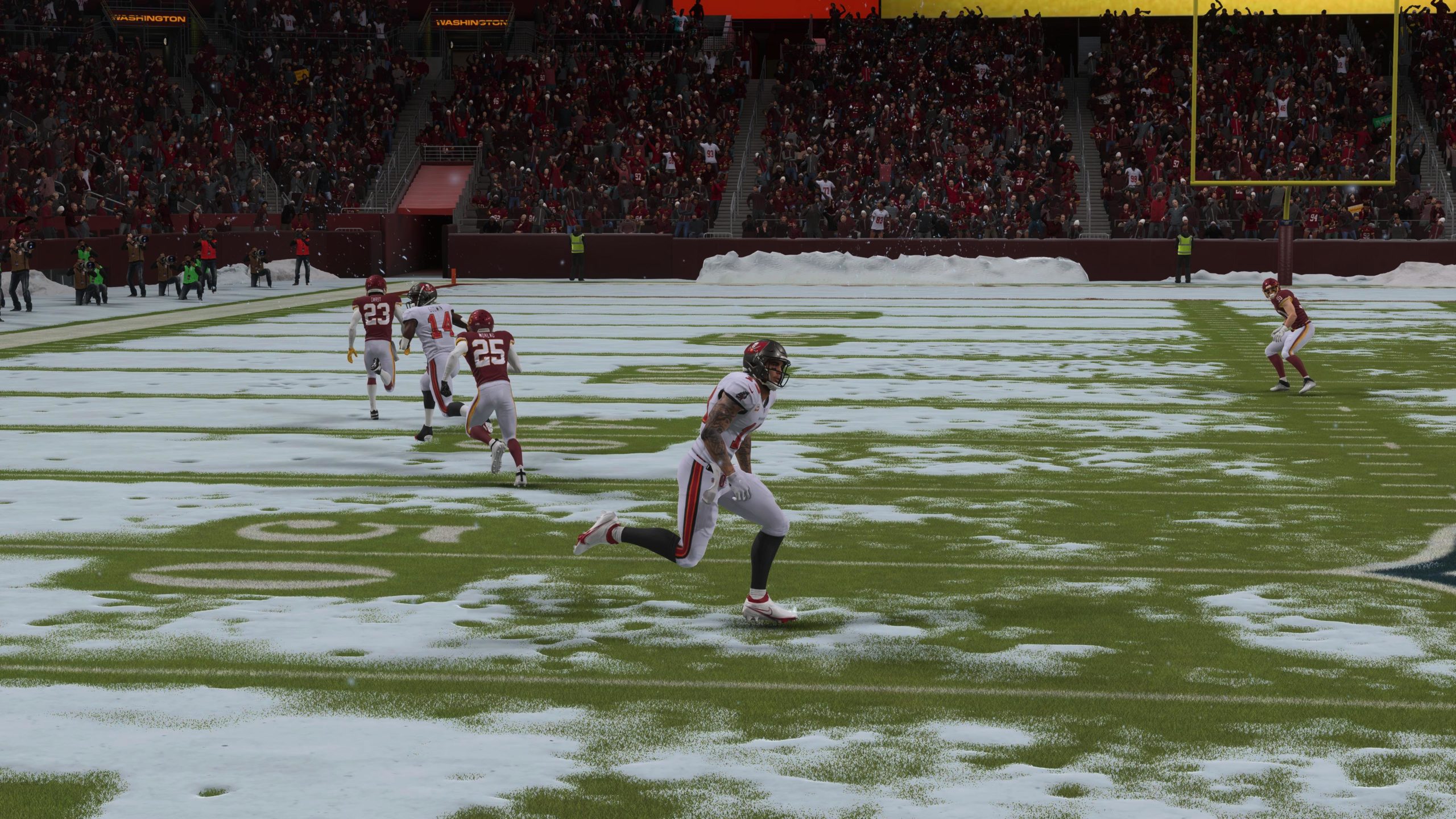 Here is another instance where the defense is in an obvious zone, and the two defenders take off to cover Godwin — with safety help as a third defender — but decide to leave Mike Evans all alone. This happens in the NFL so that isn’t the concern, but the fact that Moreau (#25 in red) physically saw Evans (player in white in the foreground) cut inside for a crossing pattern and consciously left him to go chase Godwin is a problem. This is especially true because he had safety help as well.

While man to man has seen what I would describe as a very strong improvement, zone coverage is still a bit hit or miss. However, while the zone decisions are sometimes baffling, zones still did get better. The Over/under coverage adjustments make a lot more sense now and work like they should, and deep zones also got much better. I would also put hook zones in the improved category, and zone blitzing does not feel as risky now overall.

In short, I am hoping these improvements stay intact moving forward, and the developers can build upon them for Madden 22.

In the end, the patch basically brings the defense back to what it felt like on the last-gen version of Madden 21. That’s a pretty big deal for people who are solely playing the title on either the Series X or PS5.

It feels a bit odd to still be receiving gameplay patches on a yearly title halfway through the development cycle of the next iteration, but this oddity is welcomed. Is that patch enough to warrant a purchase if you have not taken the plunge yet? While obviously it depends on the person, my suggestion would be to wait until Madden 22 rolls out at this point (unless of course you just need the console but already have the game on last gen).