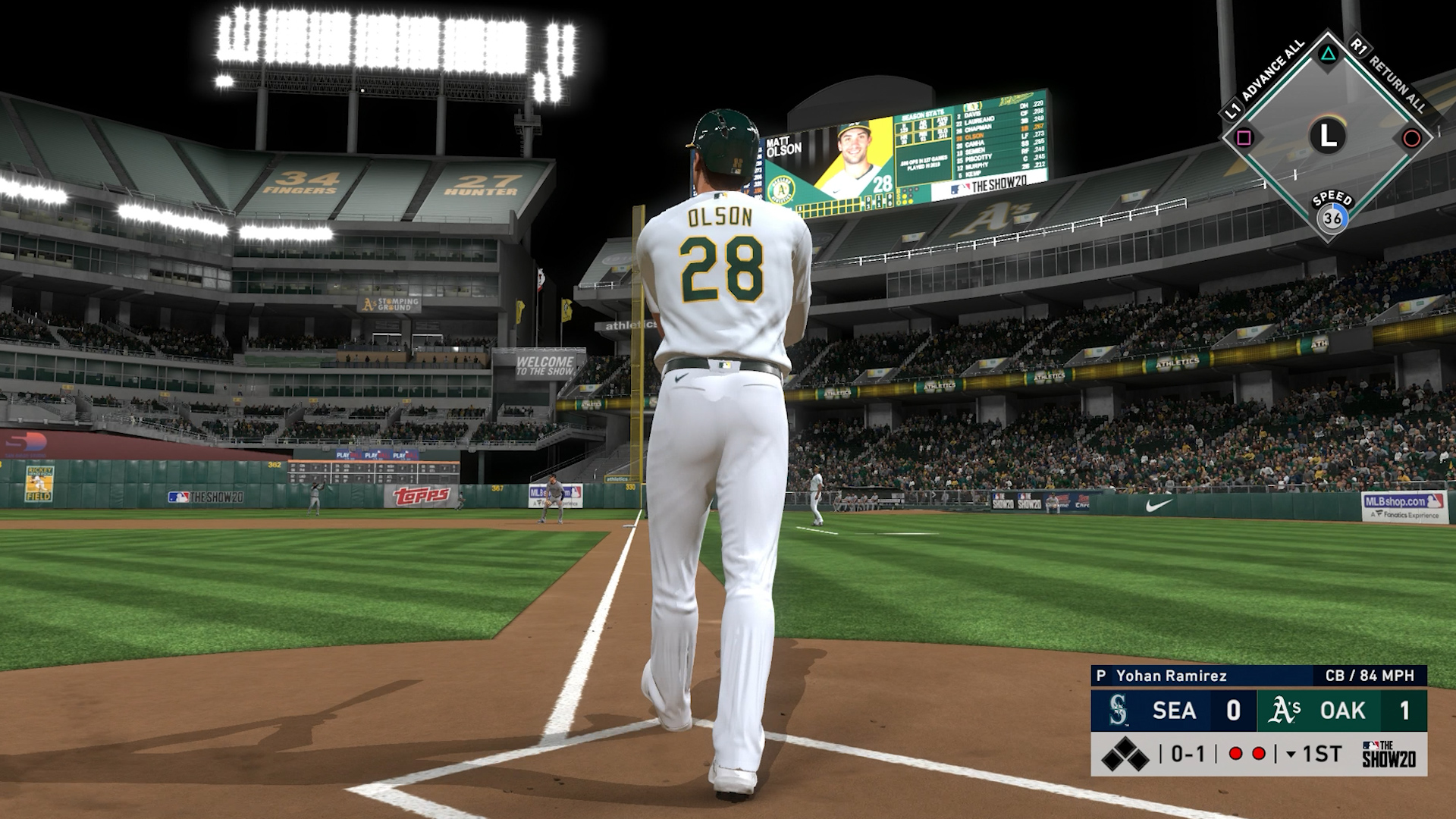 The LA Angels had a bunch of veterans to cover yesterday, but today the Athletics skew a little younger. The Athletics home run swings include six different players, but there’s only one custom celebration to focus on among the six.

Analysis: Olson has a fantastic re-creation here with the only minor issue being with his leg kick. Olson does a sort of weird thing where he sweeps his leg out a little bit on the leg kick, and that’s not quite shown here in The Show. That being said, everything else is really good, and I think of Olson’s swing like someone swinging a pitching wedge. He locks out his arms and really stops short on the follow through, and that looks correct in The Show.

Analysis: Chapman has a very simple swing, and there are very simple issues with his re-creation in The Show. Both problems occur on the back-end of the swing when the follow through begins. He needs to come more up on his front heel during the follow through, and he needs to have slightly more bat extension when ending his swing.

Analysis: Davis is another solid re-creation in The Show. I would say the biggest problem is with the leg kick once again. Davis is also somewhat unique in that his leg kick opens up his stance, which is somewhat unique. He could also use a little more rhythmic sway in his stance from his feet to his hands. The swing itself is good, and the way he walks out of the box with two hands on the bat is a nice touch.

His celebration is also accurate as he drops the salute as he comes around third base. There’s nothing more to that celebration and we move on from there.

Analysis: I am of two minds about Canha. He has some epic bat flips and he does multiple variations of them, but he sometimes also just does what’s shown above and drops the bat inside the first base line. So I won’t take any credit away here for him going with the low-key celebration, but I also would not be opposed if Canha had better bat flips in The Show. The stance itself is the issue as he does not get hunched over enough, and he doesn’t quite lean onto that front leg enough on the follow through. He should really go up on the side of the front foot as he really torques onto that front leg.

Analysis: A running theme with the Athletics here is the issues mostly reside with leg kicks and follow throughs. Laureano needs to close down his stance a bit with his leg kick, and then after that his follow through needs to come more around the midsection and stop short just a pinch more.

Analysis: Semien has the most issues of anyone in this set of reviews because he has errors both before and after he swings. Semien needs to bend his legs more and load his hands slightly differently when he begins his leg kick. After that, the follow through needs to be two handed not one handed. I think overall Semien probably just has a generic stance and swing and that’s why the issues crop up here.

We’ll be back next week to end this series. We have the two teams from Texas left to go in the AL West and then we’re all done. Thanks so much as always for scoping out this series.