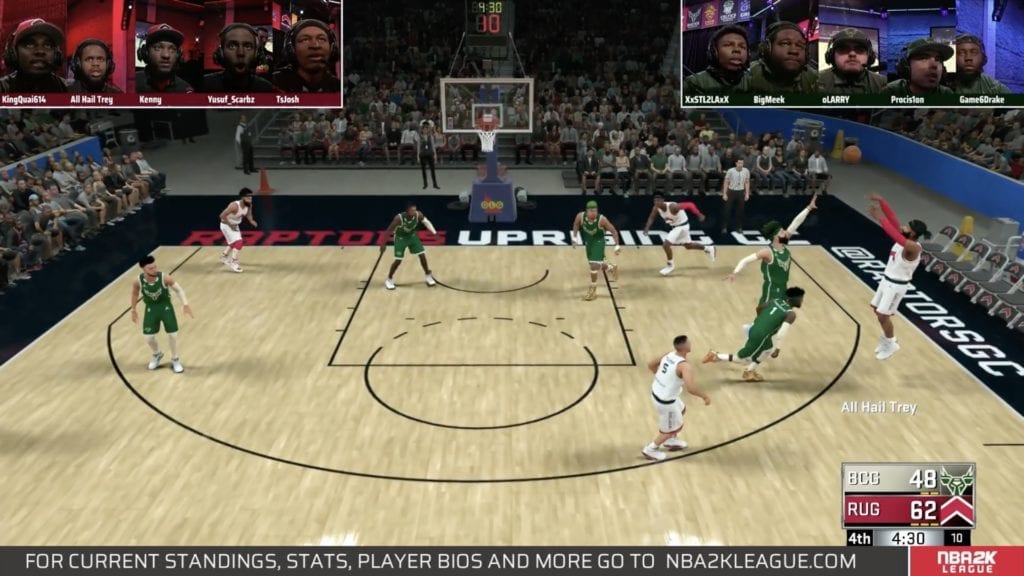 With respect and deference to ESPN’s Zach Lowe, I rented out the cheap option of his weekly 10 Things I Like and Don’t Like, shortened it, changed the title around, and made it about the NBA 2K League. So my apologies Zach if you’re reading this (and if you are, that’s terrific), but if imitation is the sincerest form of flattery then let the imitation begin.

Call me old-fashioned, but I like to see players take defensive responsibility and guard their positional opposite. The recent trend, begun by NateKahl’s success in Knicks Gaming’s run to the Ticket title, has been to have a team deploy a sharpshooting rim protector at power forward for the purpose of guarding the opponent’s shot-creating slasher.

Some players, though, can buck the trend, and AuthenticAfrican did just that in Grizz Gaming’s huge win over Mavs Gaming. Despite turning in a world-class offensive performance, AA deigned to guard Dimez (using a shot-creating slasher) on some possessions, and it worked out pretty well.

Even a sharpshooting rim protector is expected to allow a generous helping of points to the shot-creating slasher. AuthenticAfrican gave up some points, forced some stops, and also forced several turnovers. Dimez, it must be said, didn’t guard AuthenticAfrican on a single possession, and the Mavs’ inability and reluctance to play AuthenticAfrican one on one allowed “Double A” to find open teammates time and time again.

Grizz Gaming did have DDouble2K, on the sharpshooting rim protector, guarding Dimez for the majority of the game. But AuthenticAfrican switched back onto him for the fourth quarter, and managed to stay in front of the number-one pick for the most part, forcing a key turnover late.

Dimez finished the game with 41 points, of which just eight came in the fourth quarter.

Radiant Running Pick And Roll On The Wing

Radiant is a shooter. He likes to shoot, and he’s a good shooter, so it makes sense that 76ers GC moved him onto the shot-creating sharpshooter in order to maximize his shooting capabilities. It makes little sense, then, to limit the threat of his three-pointer by running a set that doesn’t give him much room to operate: a pick and roll with Feast on the wing.

76ers GC have shooters surrounding the arc, with the primary target in this set being Steez in the far corner, who, on a sharpshooting rim protector, can knock down threes. The idea is for Steez’s man to help onto the rolling Feast in the post, allowing Radiant to find him on the cross-court pass. While the set works occasionally, its intentions are clear, and since he’s hemmed in with a crush of players on the wing, it enables the Heat to not have to go far to contest a Radiant three.

What 76ers GC should revert to are simpler, high pick and rolls at the top of the arc.

Look at how far Jalen hedges on that pick! Feast has an easy lane to the basket and Radiant is quick to find him for the slam. Jalen hedges against the very real threat of a Radiant three, and as such gives up an easy two points. Radiant’s handling skill allows him to create separation for threes, but he still needs some space and spacing in the pick and roll to do so — running that pick and roll on the side doesn’t give him enough.

The Raptors have flown under the radar due to their 1-5 start (a product of their excruciatingly difficult schedule), but they’re 4-1 in their last five regular-season games. A big part of that is three-point shooting; RUGC is averaging 7.5 made threes per game in those four wins, and 11 threes made per game in their last two wins, both of which saw the team score 80-plus points.

TsJosh and AllHailTrey have hit nine and five threes, respectively, in the last two games. Pairing them as the twin components of a pick-and-roll duo proved maliciously successful in an 80-64 win over Bucks Gaming (the Bucks being a generally good defensive team). With TsJosh on a shot-creating sharpshooter and AllHailTrey on a sharpshooting rim protector, Game6Drake and oLarry couldn’t stop the pick and pop.

AllHailTrey’s release may be the swiftest and deadliest in the entire league. TsJosh has split ball-handling duties with Kenny, but is such a good shooter that he can function as a catch-and-shoot guy while Kenny runs the show, returning to primary facilitating duties when needed. Put the two together, and the defense is in for a long night if it does not switch quickly.

If you have to pick your poison, as oLarry does here, the other guy makes you pay, as AllHailTrey does with a nice cut.

At this point in the season, TsJosh is too valuable to deploy as merely a pure sharpshooter. AllHailTrey has shown his versatility across three positions both offensively and defensively. The Raptors should seriously consider running with this lineup the rest of the way, with the TsJosh/AllHailTrey pick and pop a lethal weapon in the arsenal.

Why do some teams somehow find a way to not foul at the end of games? Is Shaq somehow casting his aura down to deflect hack attempts?

Actually, we know he’s not, because the very first team to fall victim to a case of Foul Phobia was Shaq’s own Kings Guard Gaming. Way back in their second game of the Tipoff tournament, on the very first day of NBA 2K League play, Kings Guard inexplicably allowed PistonsGT to run out the clock, costing them a good chance at qualifying for the quarterfinals.

Foul Phobia struck again in week 9. This time the victim was Wizards District Gaming, who had scored to draw within a point with seconds remaining. Again, the affliction cost the victim an important victory. Had they equalized and gone on to win, Wizards DG would have been 6-4 and ranked seventh in the league. They wouldn’t necessarily have tied the game, but their inability to foul cost them even the chance at a game-tying bucket.

Late-game execution is critical, especially for teams caught in the thick of the playoff race. Every single team needs to make sure its immune to cases of Foul Phobia.