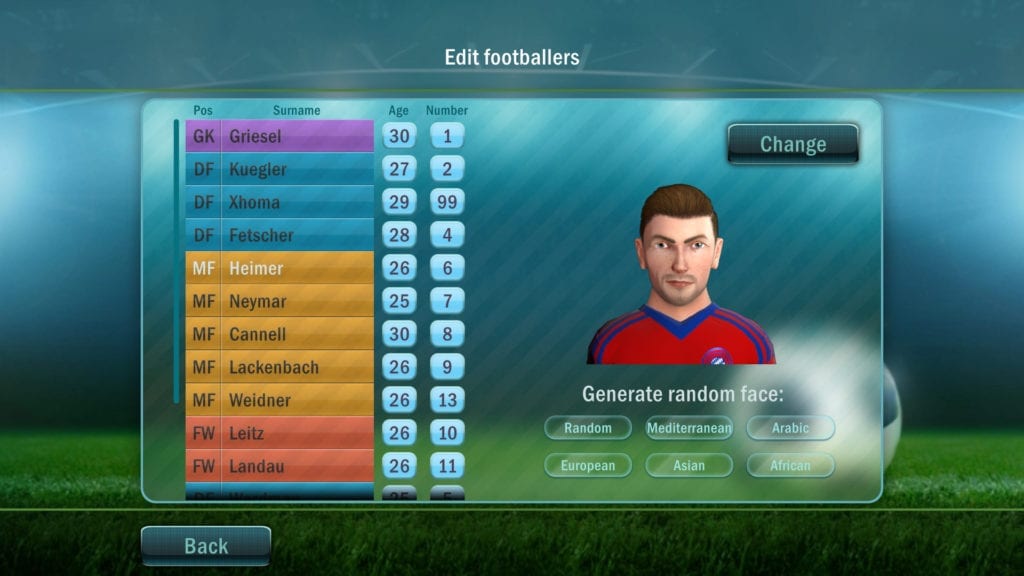 Football Tactics is an early access game on Steam that will likely appeal to a large segment of Operation Sports readers. Despite its bland title, it is a really interesting mix of strategy game, football management sim and RPG.

Football Tactics breaks soccer down into a turn-based game, which developer Creoteam compares to games like XCOM and Civilization. Each team alternates turns, taking up to three football-related actions: passing, shooting, tackling, etc. All of this takes place on a pitch made of square spaces — think chess board.

The success of these actions is governed by a really elegant system of what are essentially dynamic die rolls. For instance, if you are passing through a space containing a defender, your player’s “passing” number is compared to the defender’s “defense” number. These ratings represent the best a player can do when using that skill. Both numbers are “rolled” and the winner successfully performs (or prevents) the action.

Nearly all of the interactions in the game are handled in the same manner. Since there are only four ratings (passing, accuracy, defense, control) it’s easy to manage your players’ strengths and put them in position to be successful. However, since everyone has the chance of rolling low at any given time, there is a nice level of unpredictability that makes each game exciting. The game also includes a few twists to keep this formula from becoming stale.

The success of these actions is governed by a really elegant system of what are essentially dynamic die rolls.

First are skills, which are sort of like special abilities. These include dribbling moves, slide tackles and the ability to lead a pass. When you try to use one of these powerful abilities, you don’t roll with ratings but with fatigue (max is 10). The more you try to use a skill, the less energy you have; the less energy you have, the less likely you’ll be able to successfully pull off the skill.

Skills can also be leveled up to a maximum level of 3. The game keeps things simple here, too; an additional skill level just allows a “re-roll” when you fail. So, someone with a Level 3 “Nutmeg” skill would get three chances to beat the defender’s fatigue roll.

Lastly, pulling off a skill move gives you an additional action. Remember you only have three per turn, so getting a fourth is a huge deal. Play it right, and you can chain together multiple skill moves, essentially maintaining possession for a longer period of play. The game’s “clock” is a bank of total actions; when they are gone, so is the time. I would estimate a match takes around 5-10 minutes.

This whole skill system is very slickly balanced: executing a skill move is usually of great benefit, but each successive use of that skill becomes more difficult. Football Tactics layers a decent management sim on top of this deep strategy. It’s not going to be as full-featured as a dedicated text sim, but there is enough to nicely supplement the on-field play.

Various team upgrades affect how players develop, what kind of young players you find for your academy, and how much money you make per game. All upgrades are relatively straight ahead and easy to understand; what isn’t clear is gradually explained through the deliberately graduated tutorial.

Football Tactics layers a decent management sim on top of this deep strategy.

Beyond upgrades, you have a schedule that includes multiple leagues and cups. I spent most of my time trying to take an amateur Canadian team to the top professional leagues. While everything is fictionalized in-game, there is a robust player editor and many actual teams have been created in the Steam Workshop.

Transfers are somewhat limited. Your pool of players to buy is small and based on your team’s scouting staff. You can sell any players, but they just turn into cash instead of actually going to another team. Finally, Creoteam mentions RPGs as an inspiration, which is probably a stretch. However, players do develop and level up, often based on your team’s coaching and their own performance. As they level up, their ratings increase; you can pick a focus area for each player. Additionally, skills are learned over time, and if players level up enough a second skill can be assigned. Football Tactics is the most captivating indie PC game I have played. In addition to the strategic gameplay and management aspects, the fact that games play out quickly helped keep me going “just one more turn.” In that way, it is very much like bigger strategy titles, like the aforementioned Civilization series. Plus, it is polished and charmingly animated, with easy to read menus and a very helpful tutorial.

It is in Early Access, so more features and bug fixes are to be expected. That being said, during my week playing the game, I have encountered no large glitches or issues, outside of a graphic card problem that was an easy fix — thanks to the game’s own documentation.

There is a free demo, but if you are interested in grabbing the full experience, the price will only rise as the game nears completion.

Football, Tactics & Glory Coming to PlayStation 4, Xbox One and Nintendo Switch on January 22