In a somewhat surprising move, we got a second league SBC in less than a week, and it’s from Serie A. The rewards are a player pick between Sandro Tonali and Dalbert.

The Dalbert is an 84 overall and the Sandro Tonali is an 84 as well. As of now, FUTBin has the price at about 230K to complete the set one time, not taking into account any of the packs you get for completing the 20 team SBCs.

Looking first at Dalbert, a Brazilian in Serie A provides some very good chemistry links, which is the first plus. He has medium defensive work rates and high attacking work rates, so he may leave your backline a little exposed at times to make runs. However, he has 95 pace to make up for that, with 80 shot power, 80 short passing, 75 long passing, 90 agility, 74 balance, 75 reactions, 82 ball control, 76 composure, 87 standing tackle, 90 stamina and 74 strength.

Brazil already has some great LBs and now Dalbert joins that crew. Serie A overall has some great LBs with Sandro and in-form Theo Hernandez. Right back is not as talent-rich in the Serie A with Season 2 objective Danilo being the best option, and even he still lacks a bit — if you even have that card.

Sandro Tonali does not provide as many interesting links being an Italian in the Serie A, but the card looks good either way. He has high defensive work rates, medium attacking work rates, three-star skills and a four-star weak foot. He also has the Flair trait.

In terms of ratings, he has 89 acceleration, 81 sprint speed, 86 shot power, 78 long shots, 85 short passing, 88 long passing, 77 agility, 85 dribbling, 82 composure, 85 interceptions, 83 standing tackle, 83 stamina and 89 strength. I think this card might feel a little more like a tank than you would expect on the ball, but he’s going to be really good as a defensive midfielder who gets you the ball back after a turnover. One thing that might work against him in the Serie A is we already have some really good Allan cards who can play a similar role, but he will be cheaper than Road to the Final Allan. 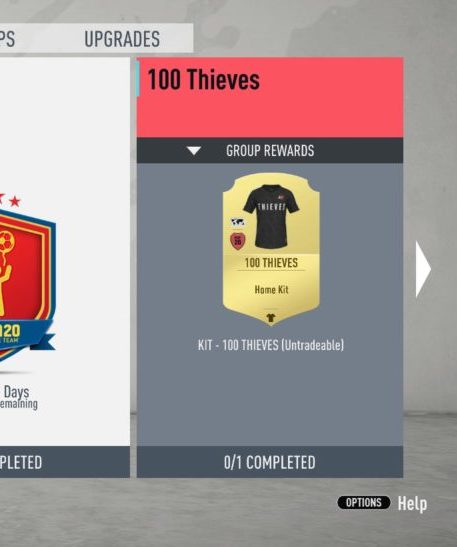 Lastly on the SBC front, you can get the 100 Thieves jersey with almost no effort at all. I like the all-black kit, looks sharp.