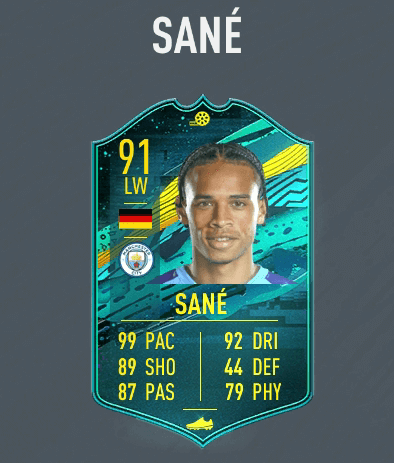 I don’t know if it was a mistake or not, but the new Player Moments Sane SBC does not have an expiration date on it. This is significant because there are four challenges attached to the SBC, so you’ll have time to slowly grind through them now. However, is the card actually worth the grind? Well, let’s talk about that and the new Headliners puzzle SBC below.

Chemistry Style Recommendation: Marksman or Deadeye. I lean towards Marksman because it gets finishing to 99 and gets agility up to 97.

Price: Roughly 570K, according to FUTBin

Quick Analysis: With Sane, I don’t think there will be nearly as much debate about the quality of this card as there is for something like the Flashback Diego Costa that came out yesterday. Sane is meta, he’s good, and he’s an easy link in a popular league. The price coming it at 560-600K is a little more concerning for many, but the fact that the SBC does not expire really does soften the blow. If you really want to lock in this card, you can very much chip away at it in the coming weeks.

Sane is also interesting because he has not received any other cards yet this season. His regular gold card is an 86 overall and hovers around 55-60K. With that card, you’re going to get pace you can push to this new level if you want to with a chemistry style. The trickier proposition is getting the shooting, passing and physical attributes to that same level as well. I don’t necessarily think it’s worth paying the extra 500K or so to get this new Sane, but the price can be offset a bit with the packs you get.

In a perfect world, perhaps you’re now rocking Sane on the left side and Headliners Adama on the right side, and you’ve now just locked in two of the most pace-intensive players in all of FIFA 20 FUT. I could easily argue in that case that at least Sane is an “end-game” card if you want to stick with the EPL and like to stay in a 4-3-3. If you’re looking to be more fluid with your players and options, then it’s less constructive to go down that path.

Still, in a game that is so pace-heavy this year, it’s hard to say Sane is wildly overpriced or not worth a look.

Quick Analysis: I think this is good value even though it’s untradeable. Getting a 50K pack for about 5K on average is worth the risk. With the upgrade SBC also currently active, it feels even safer to go with this SBC.