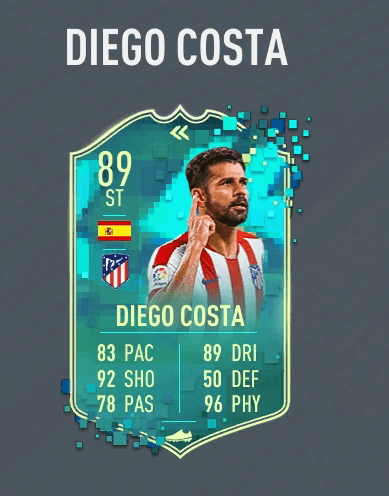 No new Headliners today for the promo, but we do get a Flashback Diego Costa SBC and the return of the 81+ Double Upgrade SBC. Let’s first talk about Diego Costa.

Price: Roughly 77K, according to FUTBin

Chemistry Style Recommendation: Engine or Sniper, but you need to boost the agility/balance a bit either way.

Quick Analysis: I know some people will be immediately down on this card because of the agility and balance, but I think that would be a mistake. I have used Diego Costa plenty this year, and I always feel like he’s playing above his ratings. He always feels like he’s in the right spot, and he’s very good at winning the ball back after he loses it. He feels strong on the ball even with subpar balance, and he’s just such a threat to score from almost anywhere. I’m sure the elite positioning and shooting numbers have something to do with these elements, but I also believe there’s just something wired into how Costa plays in this game. He just feels like he’s hard-coded to be clutch at times.

Yes, the two-star skills stink, but he’s not as out of the meta as you might think. I don’t want to use him as the solo striker or anything in like a 4-4-1-1, but in a 4-3-3 or a two-striker setup I really think he has a good spot. The price is not anything too crazy, and you should have some untradeable cards to make this even easier.

Again, if you just want pacey strikers and only want to play the most “meta” way then fair enough, but there’s still room to have fun in this game and be different. Not every game has to be an ultra “try hard” attempt, and with 99 strength and very good shooting stats, Costa is certainly a different sort of striker.

Quick Analysis: My results should not be taken as gospel, but I only packed one 81 out of the four times I did this. Everything else was between an 82-86. At that rate of return, it’s a very good value SBC, but there’s no guarantee you are that lucky. Still, this is one of those relatively low-risk ways to swap out your untradeable low-rated rare golds for some higher-rated untradeables for other SBCs down the line. I generally think this is fine to do for those who have tons of cards from FUT Drafts and so on and just need a way to shrink the roster a little.

If you don’t have a lot of untradeable cards, then don’t worry about doing this because your rate of return will be better just selling off your normal and rare golds when certain players go up due to Marquee Matchups, new SBCs and so on.