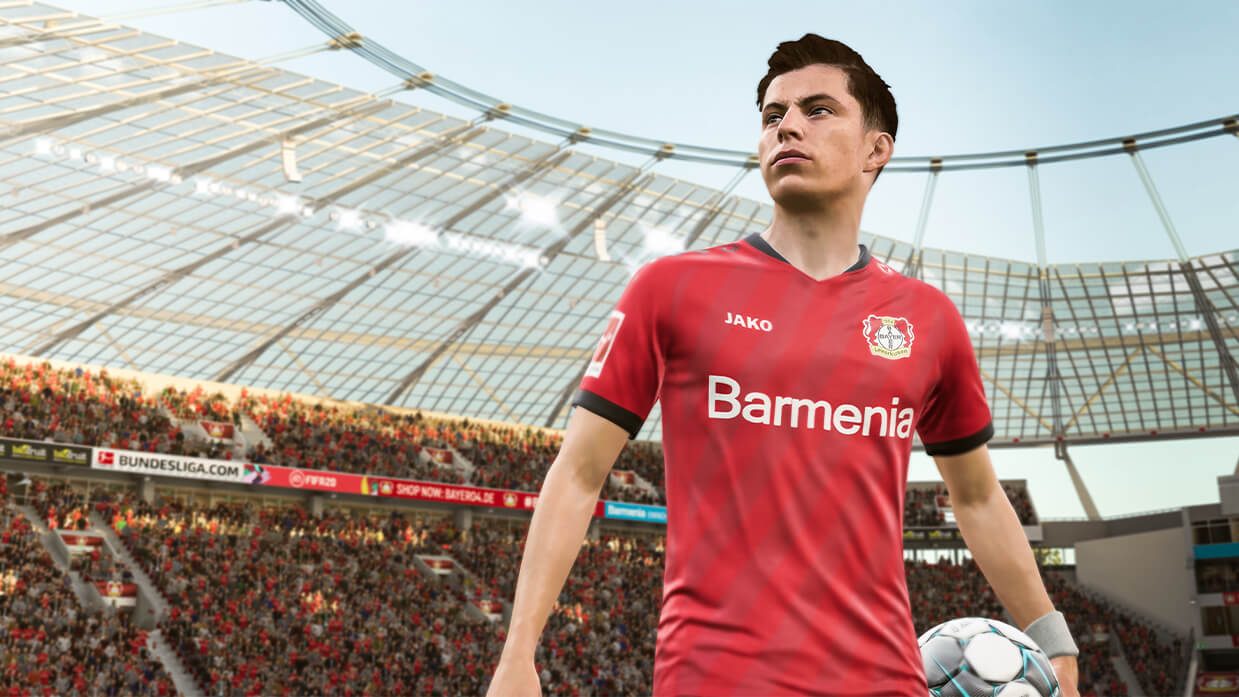 In order to properly critique the training system in FIFA 20, it’s important to understand how it works. In this two-part series, we’ll first get a grip on what’s involved in training. In part two, we’ll break down how effective the FIFA training system is across a few categories.

(You can also see the PES 2020 versions of this concept here and here.)

FIFA 20’s player training module is fairly easy to get to. Located right on the main hub of your career mode save, it’s tucked away in the bottom right-hand corner like a clinical Hazard PK. 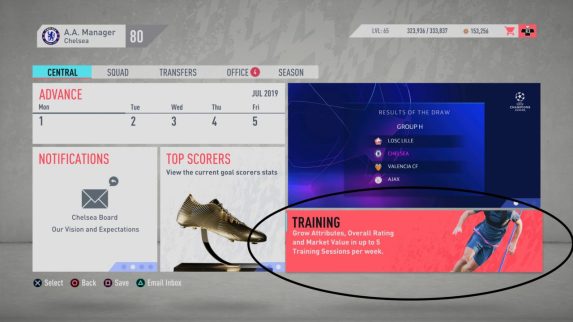 Before we dive too deep, it’s important to understand the concepts of how players are rated. These concepts will appear frequently in this series, so it’s vital we understand them because they can help or hurt you during the course of your career mode.

Player Attributes – In FIFA, player attributes are the data and information that determine the quality and the feature of a player’s technical skills, behaviors and performance on the pitch. In FIFA, FUT and FIFA Mobile, each player has a collection of attributes rated from 0 to 99 each. The average of a player’s attributes sums up their overall rating. Overall ratings are weighted by position, so if your left back is not particularly good at finishing, it’s not going to drop his overall as much as it would if he were poor at marking.

Stats are very similar to PES in that they are color-coded by ranges:

Each attribute is broken down into three different categories:

There are over 30 different attributes, and I’m not going to break each down. However, if you’d like a brief description of what each attribute means, feel free to check out FIFPRO’s excellent breakdown here.

Squad Role – In a nutshell, squad role is how much game time the player can expect. This falls more under the contractual side of things, but the role you select impacts player morale (more on player morale shortly). There are four options to choose from:

Form – Unfortunately, there isn’t a true definition of “form” as it applies to FIFA 20. Form is most likely a result of match performances, but there’s the potential for team performances and player morale. It’s rolled up into arrows, which used to be displayed on the “gameplan” menu but now can be found in the squad hub. The arrows are:

Skill Moves – A special input-dependent move set on a 1-5 star level with 5 being the highest. Unfortunately, you cannot train skill moves in FIFA 20 within career mode.

Player Traits – Traits are characteristics that are used to give players unique skills, styles and behaviors. Both the human and AI can have traits, although there are some traits that are unique to the AI. Player traits are EA’s idea of helping to add personality to players. For example:

FIFA’s been poor in the past when it comes to the AI attempting shots outside the box. Imagine playing Bayern Munich and Coutinho does not even attempt one audacious curler from outside the 18. While the impact of some of these traits are minimal, the concept is a solid one. I’m not going to go into detail about all of them, but if you’d like a breakdown of each trait, feel free to check out the EA Help Page dedicated to Player Traits (https://help.ea.com/en-us/help/fifa/fifa-player-traits/).

From right to left:

Each smiley face system is based upon four categories located at the bottom of the status tab within squad hub: 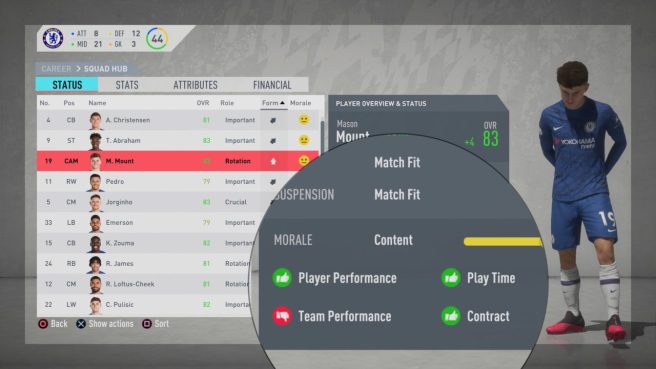 While these four categories have an affect on the player’s morale, there are additional factors that can influence them. Press conferences were purely cosmetic prior to this year, but FIFA 20 incorporated a few interactive cutscenes in addition to being able to highlight key players, thus impacting their morale either positively or negatively. Furthermore, EA also incorporated a man management system as managers can now interact with players through text messages.

Now, you can re-create actual historical text spats like the great Diego Costa/Antonio Conte one from summer 2017. Player Morale also seems to affect your overall rating as players who are in good spirits seem to get a temporary ratings boost. It’s unclear how much of a boost you get, but tying all of these elements together in FIFA 20 for their player morale system was a big upgrade. How much so? We’ll see in part two of this series.

For the best explanation I’ve seen on player morale, check out this video courtesy of RespectTheJeff:

Dynamic Potential – For quite some time dynamic potential was a feature widely requested by the community. The ability to have your players’ attributes be impacted by their actual performances seems like a no-brainer, so EA finally introduced it with FIFA 20. At its core, your players, regardless of age, will be rewarded by how they perform on the pitch. Whether it’s fighting off the retirement rumors or trying to breakthrough into the first team, dynamic potential is all about your players living up to your lofty expectations. 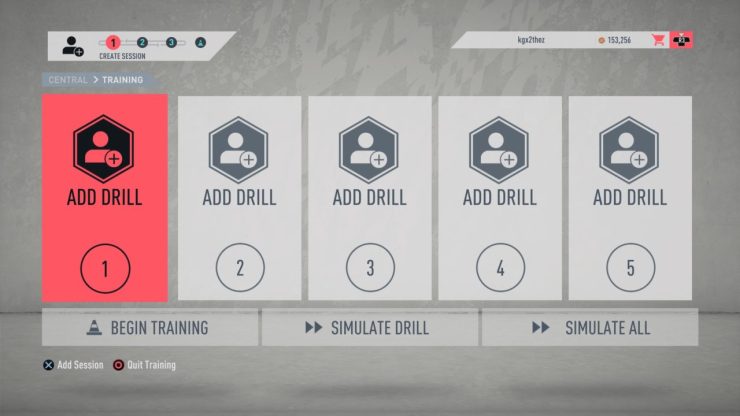 Unlike PES where you have three options to choose from, FIFA gives you player training for both senior and youth academy players within the same mode. Through weekly trainings (Sunday starts a new week of training but there is no training available on match days), FIFA 20 allows you to train up to five players at once. Each training allows you to select the player you want to train, as well as the drill you want him to perform in order to enhance their attributes: 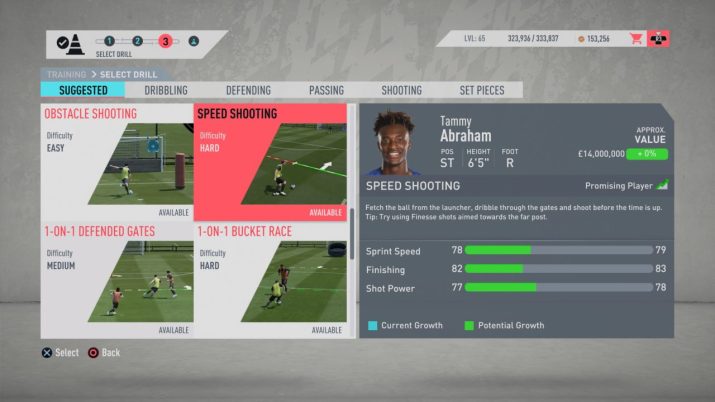 Once you’ve selected your five players and their drills for that week, you can choose to save this as a “preset” allowing you create up to five presets of your choosing. This is a pretty cool feature that I use very often. I usually set up presets for positional groups like strikers and goalies to quickly get them trained up. Once you have everything setup, you can participate in the “drills” that are similar to the drills you’re offered before a match while the game is loading.

There’s a plethora of drills aimed at nearly every position, and several of them I remember from my playing days. If you’re impatient and would like to simulate a drill, or all five drills, the option is there for you.

Before each training drill, you will see a ratings bubble filled in with a light blue color that’s filled to some degree. The majority of times players will actually be in between ratings, closer to a “71.5” instead of either a 71/72. FIFA either rounds up or down accordingly. Before you select your player and drill for the weekly training session, there will be a green fill inside of the ratings bubble. This represents the maximum growth you can receive in this attribute from this weekly drill. You can see this concept in the picture below. 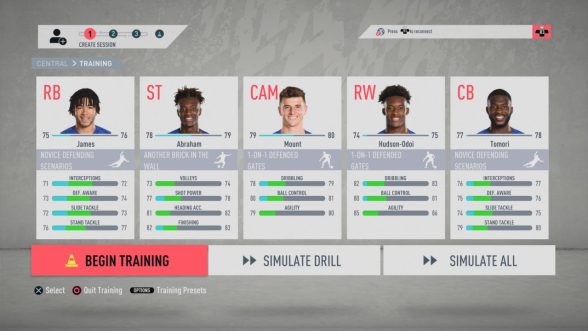 The harder the drill, the more green there is. In other words, if you complete two drills — an “easy” and “hard” — you would receive more of a ratings boost if you get an “A” rating. So there’s a bit of risk/reward when it comes to training, but if you’re really good at a few “hard” drills it’s worth doing.

At the end of each drill, you’re given a letter grade (A-E) based on your performance: 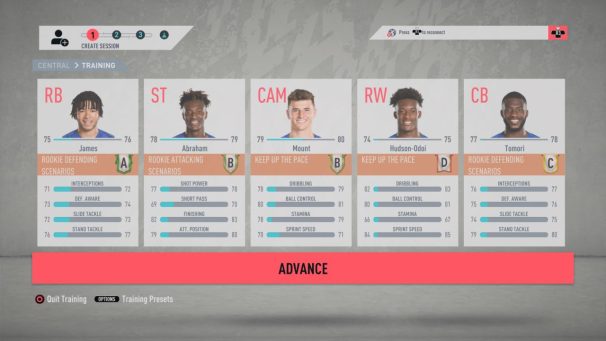 During the beginning of the season, I’ll usually play a few drills at first, but I usually end up simming the good majority of them. It’s generally a good idea to think about the strengths and weaknesses of your players. Trying to improve through targeted training drills is what you do in real life, so it’s nice that FIFA has this feature. Under the right circumstances, perhaps an injury to a player where his backup is your academy kid, you could really focus all of your weekly training on him and develop him into the next legend at your club. On the flip side, the management of training can become very time consuming. I usually tend to make my presets and rotate between easy/medium/hard drills with the occasional player replacement due to injury. 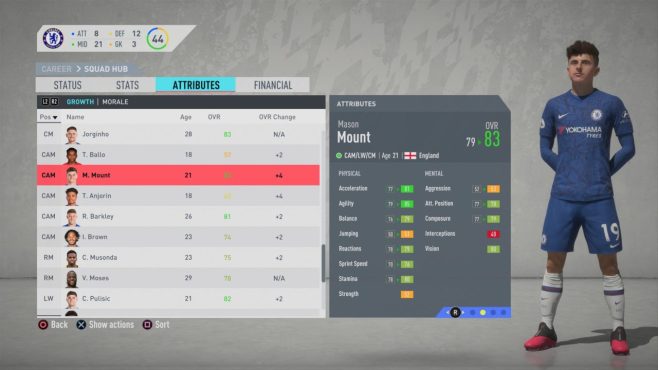 You can find all of your players’ development on the “squad – squad hub page” within career mode. Next to each improved attribute, you’ll see a box to the left indicating what their original rating was in that particular area. If their overall increases or decreases, you’ll see either a “+” or “-“ by their overall rating.

Keep in mind that as you increase your stats, your attribute color might change accordingly. Usually a good rule of thumb in FIFA is the more the green, the better. FIFA’s career mode player database is huge so you might run across players you’re not familiar with, and since tracking stats from other teams is a pain, most people just look at their attributes. 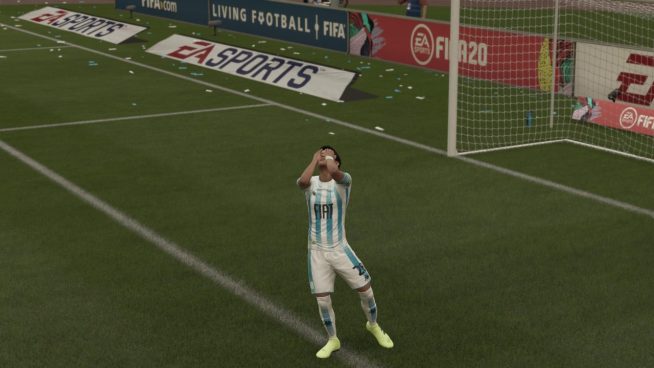 Player development in FIFA 20 is as an interactive performance-based system that combines stick skills (training drills) with short and long-term planning. Mix in some RPG ingredients and there’s enough to keep most people busy. If it’s overwhelming — and it very well may be for certain people when it comes to the drills — you can always just rely on the tried and true formula of playing time plus good match performances to ensure that your players will improve over time.

Be sure to check out part two where I grade out FIFA 20‘s training system in areas such as realism and depth.