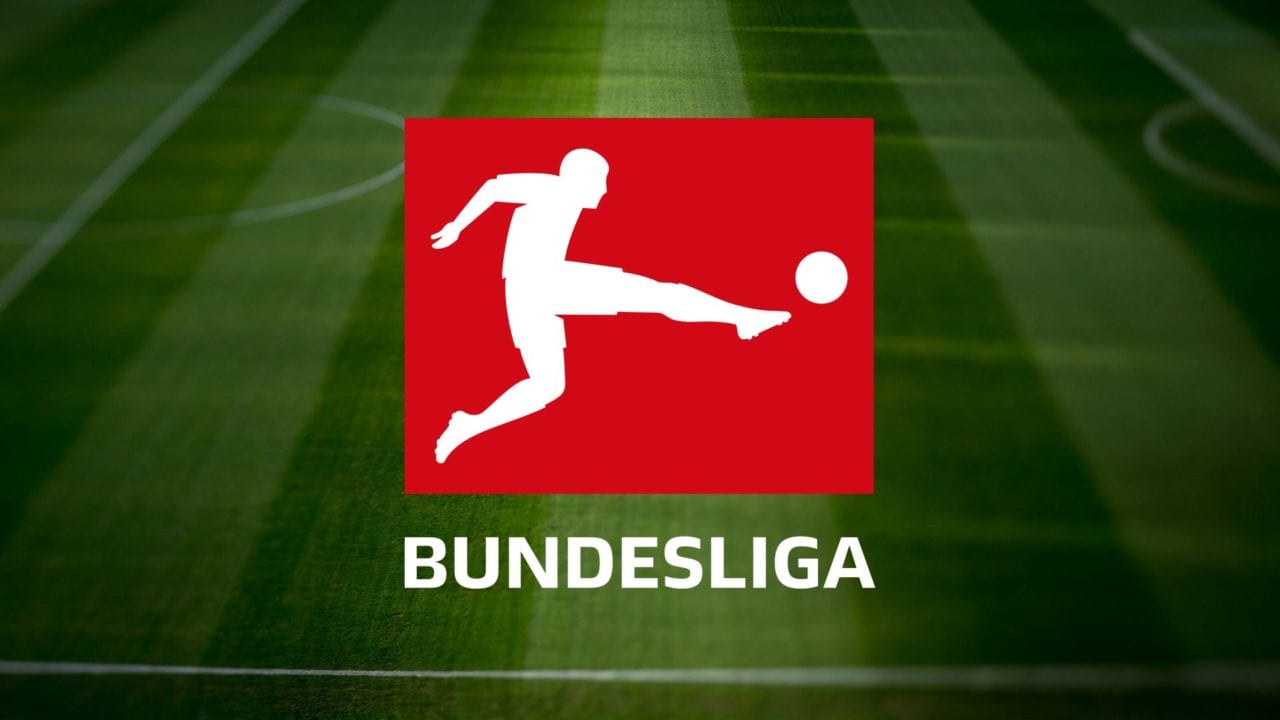 As a footballing country, Germany is no stranger to the spotlight. While Bayern Munich is the gold standard, clubs like Borussia Dortmund, RB Leipzig and Schalke are consistently in the mix challenging the Bavarian giants despite sometimes providing a direct pipeline to them. With that being said, let’s take a look at some of the most underrated players the Bundesliga has to offer in FIFA 19: 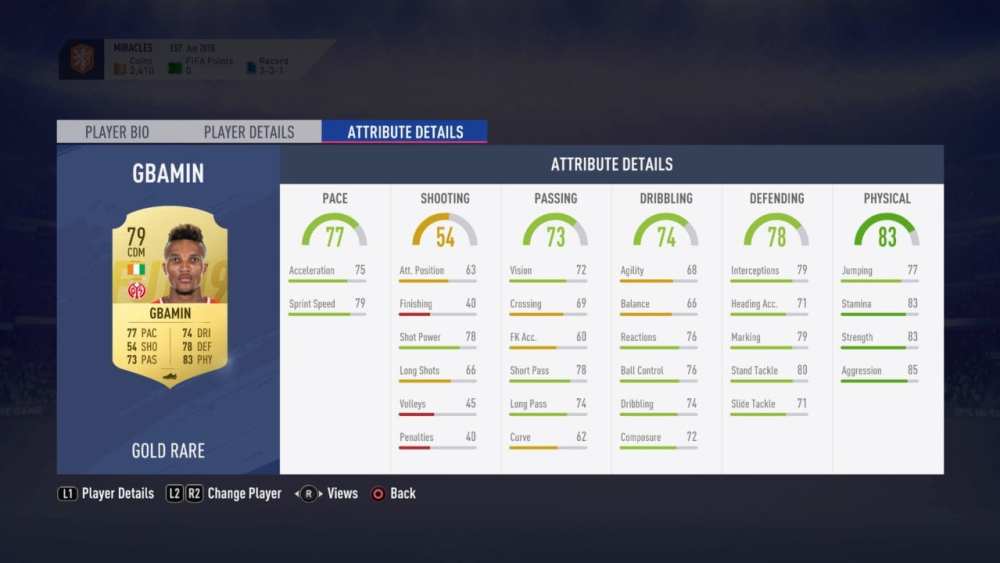 Despite their mid-table position, Mainz have a real beast in their midfield in Gbamin. Not the most technical of players (74 dribbling, 76 ball control), Jean-Philippe has the powerhouse frame made for breaking up attacks (85 aggression, 80 standing tackling and high work rate) and good enough pace (75 acceleration, 79 sprint speed) to play in any league. While he might not develop into the next Yaya Toure, Gbamin and his affordable price (roughly 15 million euros) make him an excellent rotation and depth option for bigger clubs. 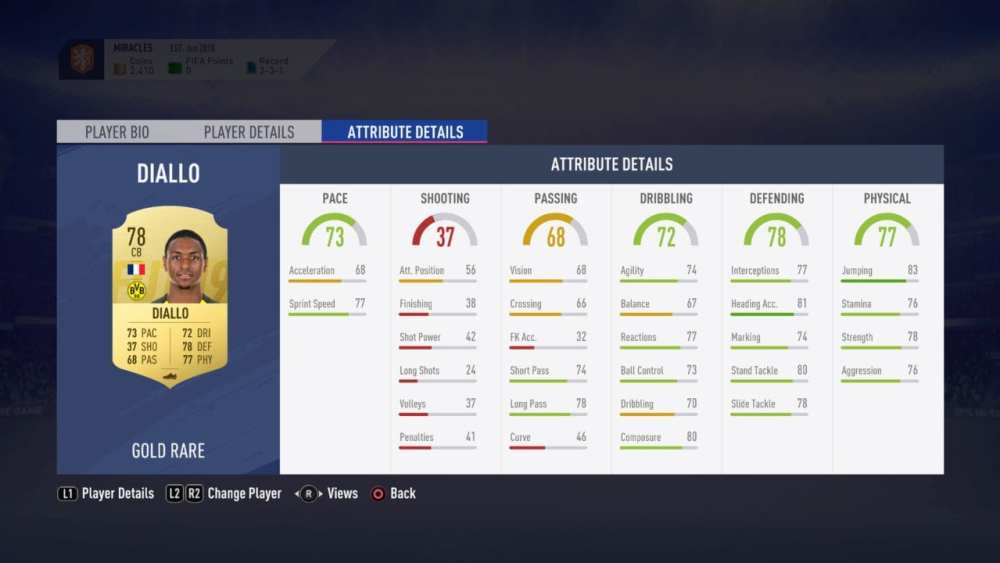 Sancho, Pulisic and Reus might take all of the headlines for Dortmund, but if you’re in the market for a young and tested center back with good potential, then Diallo is your man. Capable of also playing left back, Diallo blends good power (78 strength) with good pace (78 acceleration, 77 sprint speed). While his positioning (59 rating) needs some training, Abdou is also adept in the air (84 jumping, 81 heading accuracy) so he can help out on set pieces and defend crosses. 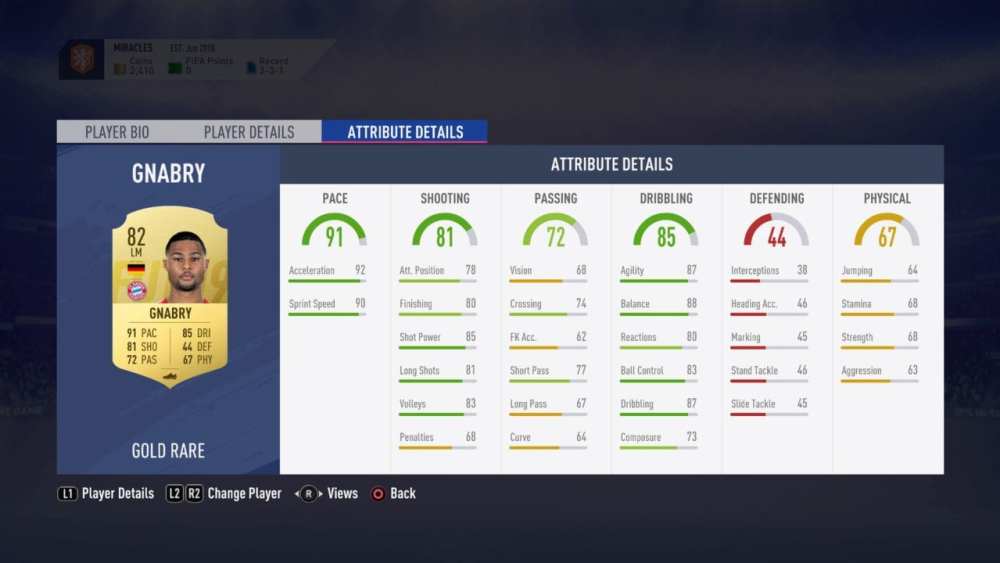 The Arsenal reject, Serge Gnabry has found himself a home on the right wing for FC Hollywood. Blessed with pace (92 acceleration, 90 sprint speed) and deadly dribbling skills (87 dribbling), Gnabry at just 22 has emerged and will surely feature for the German national team in the months and years to come. While he’s valued higher (roughly 35 million euros) than the previous two players on this list, Gnabry is certainly attainable for wealthy clubs across the continent who are in need of speed down the flanks. 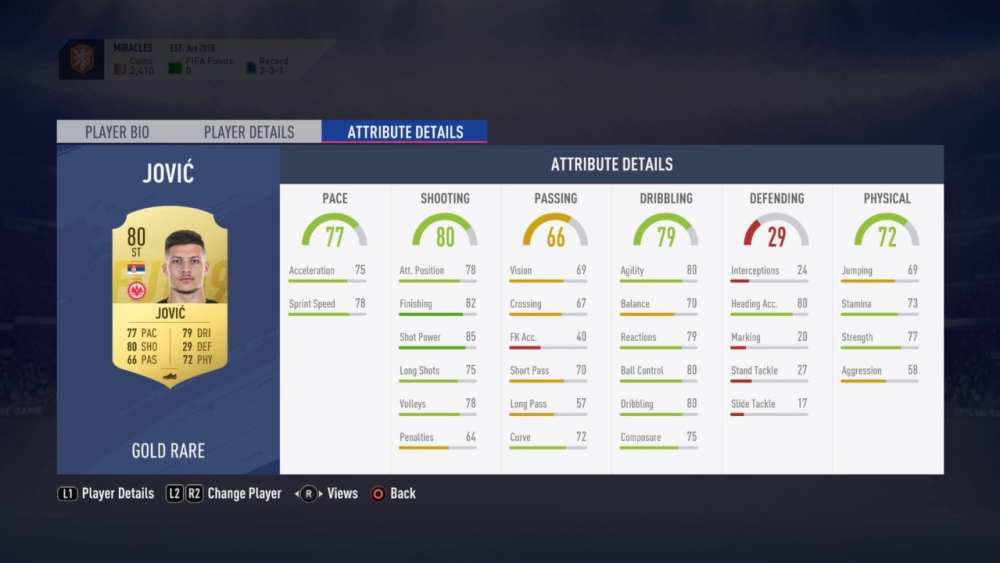 Bursting onto the scene this year, the 20-year-old Luka Jovic will most certainly not be at Frankfurt for too much longer. Jovic not only has the power (77 strength) but decent movement statistics (77 sprint speed) to keep defenses honest. Already linked with the likes of Chelsea (although to be fair what striker isn’t linked with my Blues), Luka’s positioning (84) is well beyond his years and with 85 finishing, he’s only going to improve. Get him now while he’s affordable (roughly 25 million euros) because once he makes the next jump up in competition he’s going to cost a whole lot more. 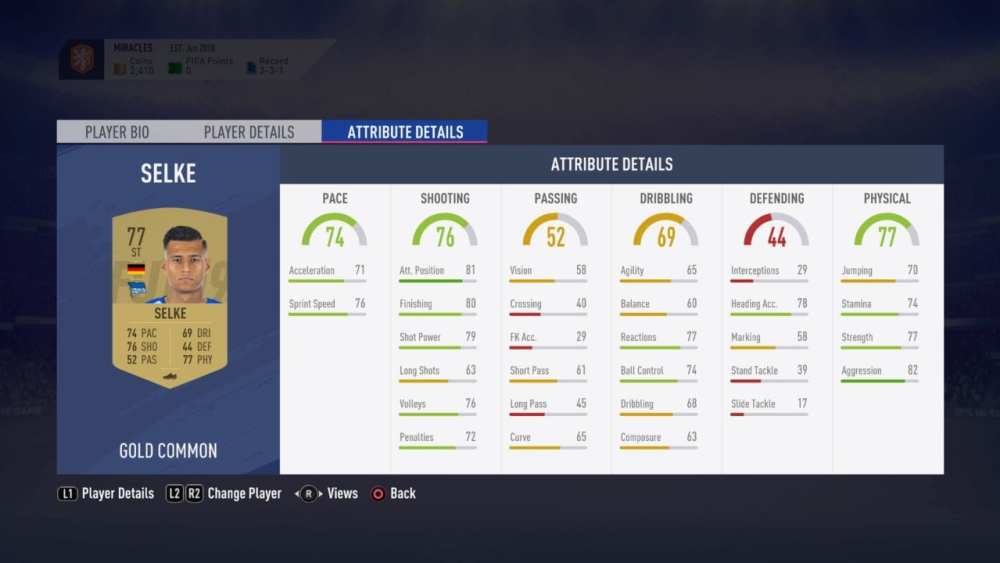 Plying his trade in the German capital, relatively unknown striker Davie Selke is a bit of a throwback given his 6-foot-4 frame. Aggressive (82 aggression) and positionally sound (80 positioning), Selke is a good target man in the box but has enough pace (77 sprint speed) to contribute on counters. Throw in his 80 finishing, and he could provide you with a quality backup striker at a top club for when you need to throw on another attacker and flood the box with crosses. 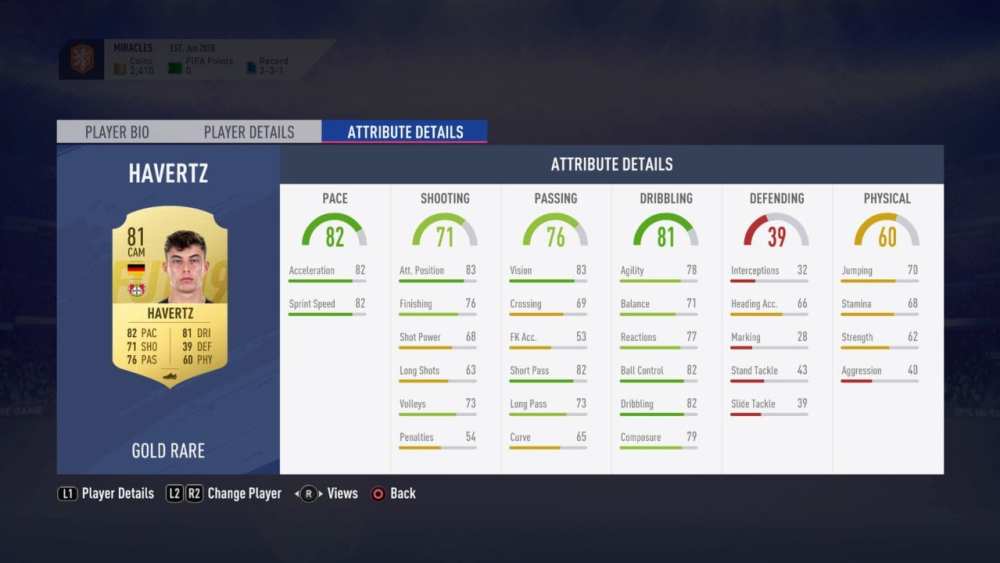 Dubbed the next “Mesut Ozil” and the future of the German national team by Joachim Low, Havertz appears to be taking the world by storm. Linked to all the big clubs in real life, Kai has it all. Blessed with height, great technical gifts (84 ball control, 81 dribbling), and pace (86 sprint speed), this gifted midfielder is a player you build your midfield around. Yeah he’s going to cost upwards of 40 million euros, but Havertz should be able to walk into almost any side not named Real Madrid or Barcelona. 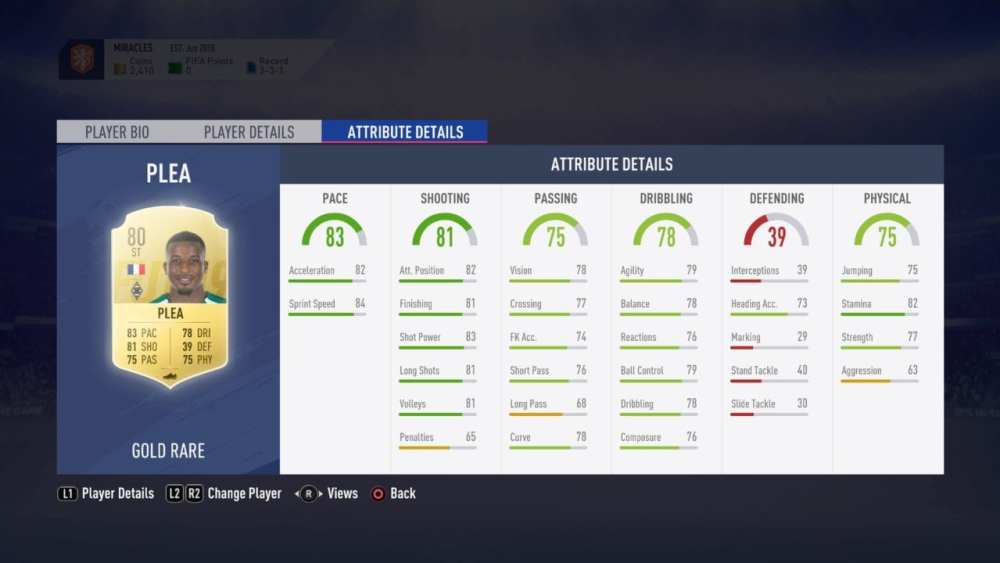 Thorgan Hazard might be the first player to come to mind when you talk Monchengladbach, but attacker Alassane Plea’s versatility (striker/left wing) makes him a vital piece on any team. With nearly all of his main stats on green (only long passing is orange), Plea is in his prime and can come in and contribute, either as a starter or an impact sub. The former OGC Nice man won’t develop much further, but you should be able to get at least 3-4 good years out of him before he starts to decline. 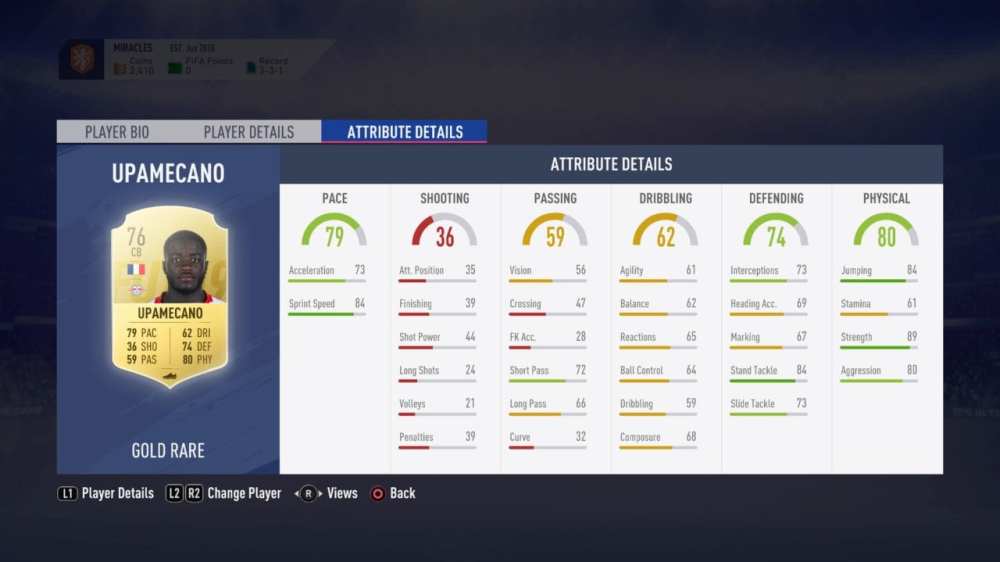 On a team highlighted by striker Timo Werner and newly added US international Tyler Adams, it’s Upamecano who flies under the radar here. Power (88 strength) and pace (85 spring speed) are rare for any center back in FIFA 19, let alone a 20 year old who is only going to improve in the mental side of the game. Just another in the seemingly endless pipeline of young French center backs, Dayot only needs to improve upon his marking (68 overall), but with only 20 goals conceded so far as a club by Leipzig, a ratings adjustment in his favor could be in the works. 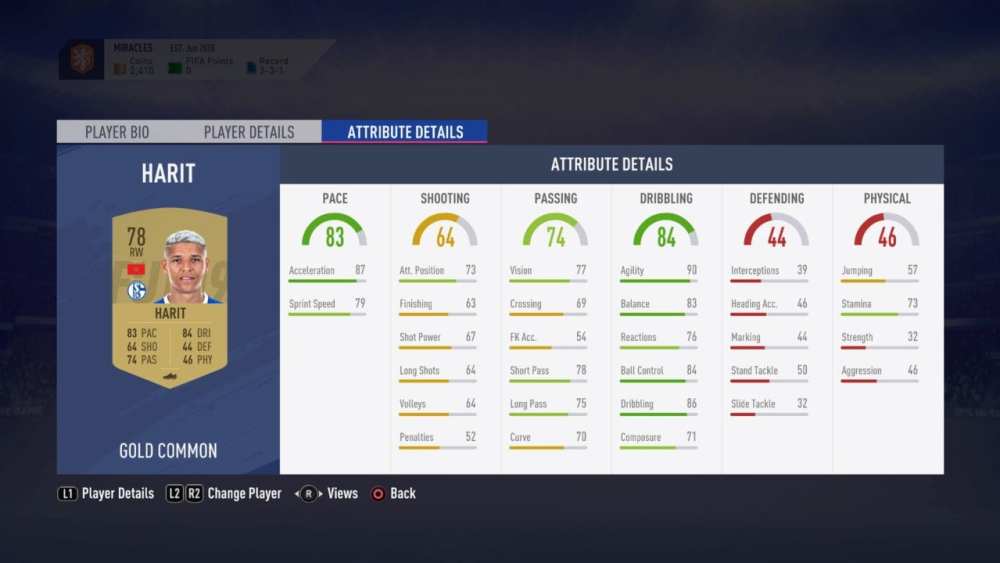 Despite Schalke’s poor run of form this season (currently sitting 14th), Amine Harit finds himself on this list because of what he can do with the ball at his feet. With five-star skills and a four-star weak foot, Harit and his excellent movement skills (90 agility) make him that creative spark you need to unlock a defense with a moment of magic. While his strength is severely lacking (32 strength), Harit is probably better suited for more technical leagues like La Liga, but given the right protection, he could provide some game-changing moments. 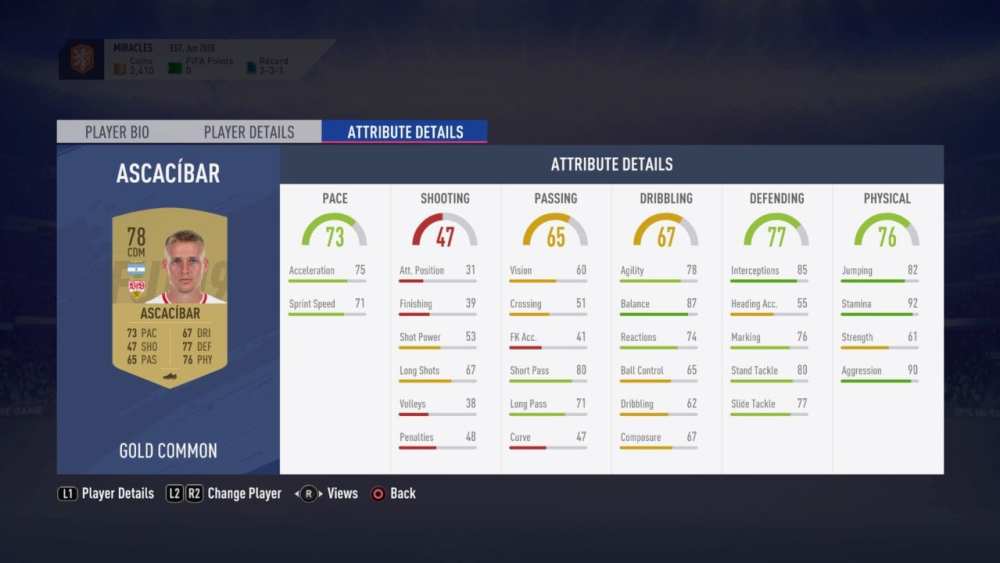 Dubbed “The Argentinian Kante” — alright I just made that up — this diminutive midfielder is an absolute destroyer in front of a back three/four. What he lacks in height and prowess in front of goal (39 finishing), he makes up for with tidy passing (80 short pass) and mentality for destruction (90 aggression). Furthermore, his 90 stamina means he can play nearly every match and put in a shift. Ascacibar is a perfect fit for trying to shut a game down. 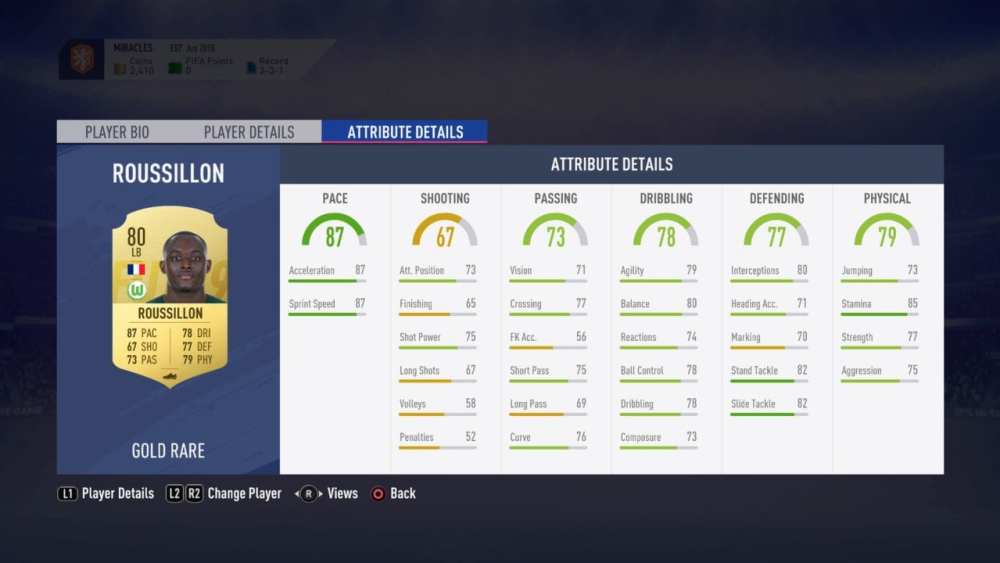 One of the older players on this list, Roussillon is an attacking fullback with good speed (87 sprint speed and acceleration) who can send in a cross (77 crossing) just as well as he can make a tackle (82 standing and sliding tackle). It’s always hard breaking the bank on fullbacks so scooping Jerome for roughly 20 million euros might seem like a lot, but if you’re serious about competing now you should be able to get at least 3-4 more good years from him. 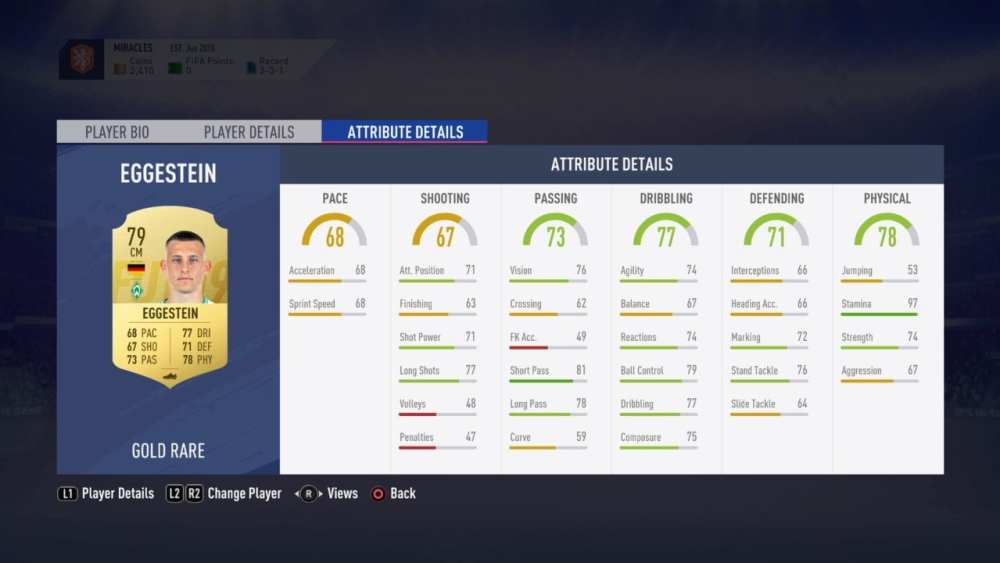 Last on the list, but definitely not least, is Werder’s Max Eggestein. While no particular stat will jump out at you, Eggestein possesses the kind of all-around game that makes him capable of being slotted into the midfield, especially with his 97 stamina. A capable passer (81 short pass) and confident on the ball (79 ball control), Max is a good young German box-to-box midfielder capable of providing excellent depth at a low cost (25-35K a week in wages).

While this list is certainly not the “end-all, be-all” when it comes to players flying slightly under the radar in the Bundesliga for FIFA 19, it’s a good reference point for scouting and acquiring players that most likely aren’t going to push you over the top (except in Havertz’s case), but keep you in the mix in your career mode/Ultimate Team endeavors. What underrated players have you come across during your playing time in the Bundesliga?