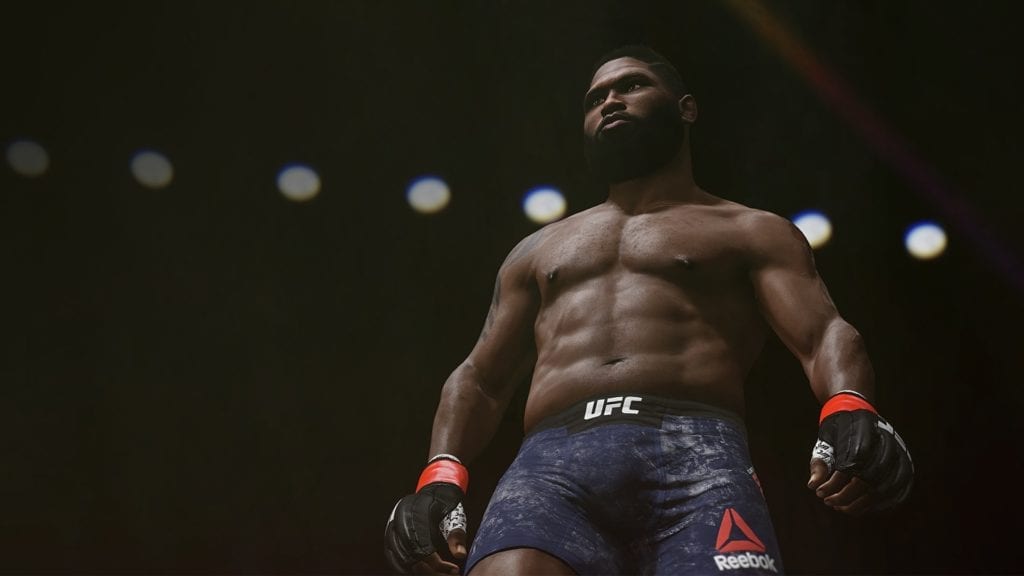 EA Sports UFC 3 game update 1.06 is available now for both Xbox One and PlayStation 4, primarily focusing around grappling and footwork. Check out the full patch notes.

Fighters with new taunts in the content update. #EAUFC3

The biggest change to grappling comes in the form of a new feature, allowing you to perform takedowns on your opponent that cannot be denied when setup in the proper context. In order to perform these takedowns, you’ll need to use a fighter who has a double leg takedown and has a takedown rating of 90 or higher.

The first scenario in which to execute this takedown is against a forward-moving leg kick that lands on the outside of your lead leg. A window will open up just before the leg kick lands, and if you execute a double leg takedown attempt inside that window at proper range, you will perform a takedown that cannot be denied.

The final scenario happens when you duck under a rear strike that your opponent misses, which will open a small window before the strike would land, in addition to the window described above. It’s important to note that the takedown windows scale with the different strike types and the stamina advantage you have over your opponent. Less committal strikes, like jabs and straights, won’t open a viable window until you’ve earned at least a small stamina advantage. More committal strikes, like superman punches and overhands, will open a viable window with no stamina advantage, and may still present a viable window even with a moderate stamina disadvantage.

The next big change to takedowns occurs when your opponent’s back is to the cage. Prior to this content update, the only way to enter into the single leg and double leg against the cage positions was if a takedown was denied late when the opponent was near the cage.

With this content update, any takedown performed when the opponent’s back is within two feet off the cage will end in the new cage positions.

New transitions have been added to that position, allowing the DOM to throw their opponent to side control as well as finish the takedown. This gives you two directional transition options to bring the fight to the ground.

We’ve also slowed down the SUB transition to over-under, putting the onus on the defensive player to deny the transitions.

Finally, we’ve tuned the grapple advantage you get when you evade your opponent’s strike to make the window bigger, making it easier to capitalize on a successful slip to earn a takedown. These changes should give players a more diverse set of tactics to bring the fight to the ground, making strike selection, timing, and cage position more important factors in the battle between the striker and the grappler.

Once the fight makes it to the ground, the player can now take advantage of a new feature which allows you to use more strength and energy to complete certain transitions before your opponent is able to complete theirs. We call this the Muscle Modifier.

By pressing R1/RB when performing a grappling transition, certain transitions are now sped up at the cost of considerably more stamina. How much the transition is sped up depends on your stamina. If your stamina is full, the transition speed will be doubled. The less stamina you have, the slower the speed of the transition. When stamina becomes low enough, the increase in speed becomes negligible. Stamina cost is always the same, so it will be up to you to decide when and where this feature is worth using.

Not all transitions can be sped up using the Muscle Modifier. Only transitions that require strength and explosiveness to complete in real life will apply.

The current list of transitions that support this feature are:

The last big change to grappling involves ground and pound. In an attempt to make finishing the fight from the ground more viable, we’ve slowed down head health regeneration on the ground. This will make damage persist for longer, making it possible to use strikes more strategically to setup finishes.

We’ve also made the grapple advantage gained from blocking strikes expire, which will put the onus on the defensive player to act quickly to take advantage of it, quickening the pace of the fight on the ground.

The biggest change to the standup game with this content update involves the footwork of forward-moving combinations. We’ve added the concept of range reduction when throwing multiple forward-moving strikes.

Any forward-moving combination will start to lose range and speed on the third consecutive strike thrown, unless you are switching between body and head strikes, in which case the range reduction begins immediately.

Range reduction means your fighter won’t track as well against a backwards-moving opponent. In fact, as soon as the range of your forward-moving combination gets reduced, a retreating fighter will start to avoid your strikes and create space without having to perform any evasive maneuvers. This will make aggressive fighting much riskier, and players will have to be mindful of what combinations they are throwing when moving forward if they want to maintain pressure.

If the attacking fighter wants to cover more distance and maintain pressure on a retreating opponent, they can still do so, but they will have to modulate their strike output in order to maximize their range. Once a combination is about to be range reduced, simply slowing down the input of the combination by approximately a quarter of a second will be enough for the fighter to reset their footwork and achieve maximum range once again.

This adds a new skill element to forward pressure and distance management. Mindless forward aggression will be far less successful, but deliberate forward pressure with awareness of footwork limitations can still be successful when done properly. These brief delays in output can leave a window open for the retreating fighter to land a strike in between the opponent’s forward-moving strikes, if timed properly.

In order to ensure that balance doesn’t shift too far towards the retreating fighter, we’ve also tuned the movement speed curve to make cage cutting much more effective. This, combined with the new cage takedown entries, should give skilled players who control the center of the Octagon more tools to control their opponent.

Finally, we’ve tuned the advanced side lunges to have more range, and further reduced the evasive retreat stamina tax by 50%. These changes should give more options to every playstyle when it comes to footwork.