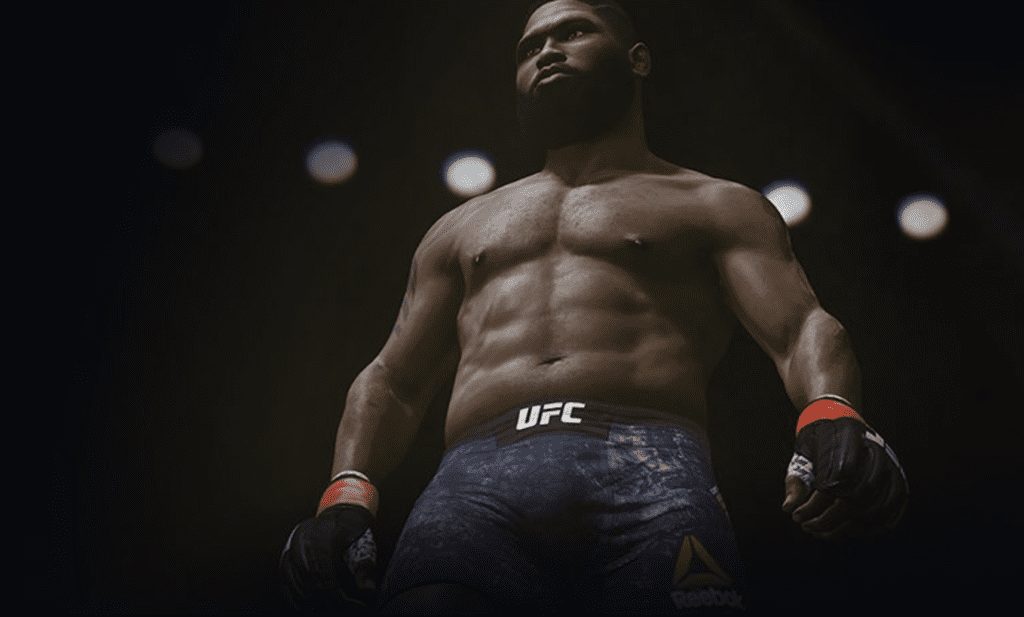 When first loading up UFC 3 after the new patch, my eyes wandered to two things: driving double leg takedowns and Dan Severn. It’s always fantastic to see the earlier MMA generation represented, and Severn’s grappling skills did not disappoint.

In surprising fashion, a pair of legacy fighters from the digital past have also returned. The main protagonist of Fight Night Champion, Andre Bishop, makes his debut here and proves to be a fantastic overall fighter. Additionally, the Ivan Drago-inspired Isaac Frost is a seriously huge athlete who makes most heavyweights look meager by comparison. As EA Sports’ UFC titles are spiritual successors to the Fight Night series, it’s fantastic to see them reach into the past here.

Utilizing the new driving takedown, I could push my opponent toward the cage before picking him up and delivering him back to the mat with satisfying force.

The addition of the spear takedown is also welcome as a sort of “aggressive” alternative to the regular takedown, only occurring when the opponent is sufficiently worn down. I found myself using it almost as a defensive maneuver, quickly taking my opponent to the mat in a critical moment to prevent the damage I was taking standing up.

I can definitely see the potential issue of it seeming overpowered, because there’s really not much you can do about it other than to watch your stamina. But perhaps it is simply a dash of inconvenient realism for when your fighter is less than stable on his or her feet.

One thing that still has me hesitant after several matches is the change to not automatically sprint when the opponent is stunned. Seasoned players will recognize that this is the time to “close” and finish the job, and you must get there before your opponent has a chance to shake the cobwebs loose. Having to sprint manually will take some getting used to, and I simply can’t imagine too many situations in which a player would want to charge at a slower speed.

Combat sports like this are perhaps the trickiest to tune. There is a constant balancing act of stamina drain, stamina recovery, stun hits, damage maxes and more. The UFC 3 team has consistently taken steps forward in this endeavor since the game’s launch. With the continued effort to create a fair fight, plus the addition of more fighters, stepping into the Octagon continues to be a welcome experience.