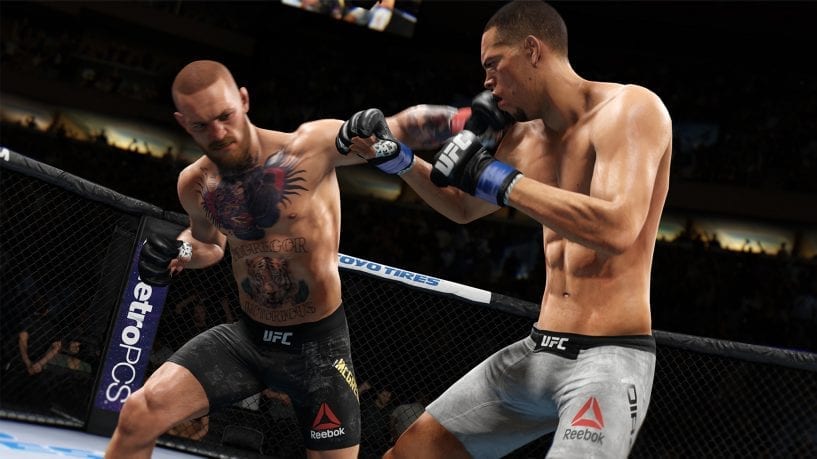 The sport of mixed martial arts is equal parts carnage and chess match. Long-time UFC commentator Joe Rogan describes MMA as “elite level problem solving with dire physical consequences.” With this view of the sport in mind, the team at EA Vancouver has overhauled many gameplay elements in their new release, EA Sports UFC 3.

In this gameplay-specific look, we will go over what’s new, what’s good, and what could’ve used a bit more attention. There will also be a breakdown of the revamped career mode and a final review in the coming days here at Operation Sports. With that said, let’s dive right in. 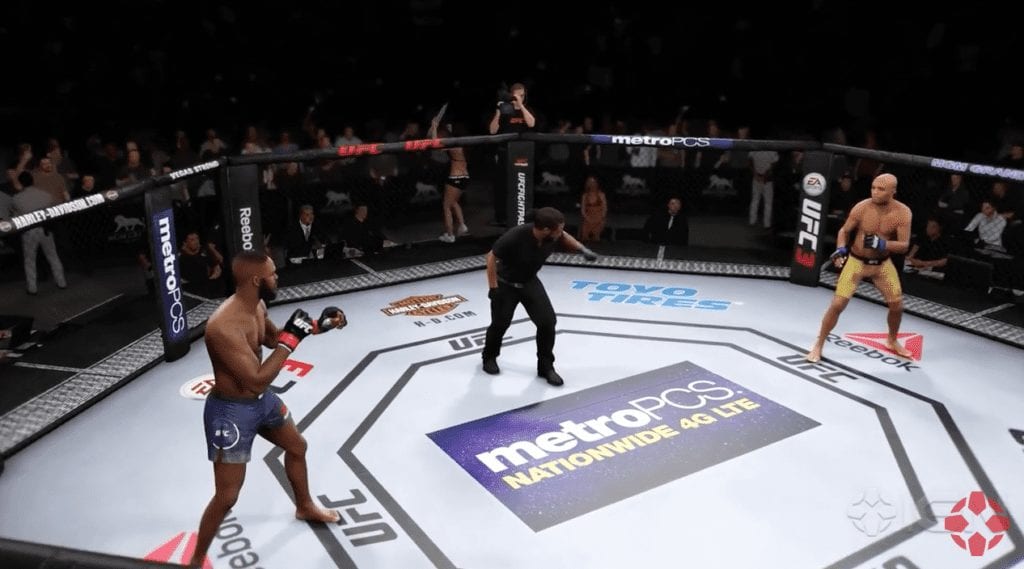 If there is one thing that EA knows about combat sports, it’s how to make a fun stand-up experience. Dating back to the Fight Night series, each iteration of EA’s combat simulations refine the art of the knockout. This year in UFC 3, striking has been substantially improved. Right off the bat, fighter movement is noticeably smoother and more responsive. With the sway mechanic being mapped to the right stick to complement the movement that remains mapped to the left stick, counter punching, dodging and being spry on your feet are easier than ever.

The stamina system has also been overhauled so now spamming one-two combinations come at the cost of potentially getting knocked out with a tired fighter. The new user interface does a great job letting players know the status of the various body parts of their fighter, including bone cracking sound effects and a flashing HUD once a fighter enters a health event. These health events range from having a fighter merely wobbled, to knockdowns, to fight ending flash knockouts. For the hardcore players, there is an option to fight without the HUD that makes for a more nail biting experience.

It’s that anxiety of the stand up that makes the new “Real Player Motion” so special. Trying to back away when getting rocked or running after a hurt opponent make every exchange fun and rewarding. Players move far better in UFC 3 than in prior games in the franchise, and the difference between Heavyweights like Alistair Overeem and a 125-pounder like Demetrious Johnson is night and day.

More than anything, “Real Player Motion” gives players more agency over their fighter, and unlike previous UFC games, fighter control is fluid and responsive. Even when taking losses, I rarely felt like I was getting robbed, though there were instances where the A.I. almost assuredly reads inputs at higher difficulty (more on that later.) 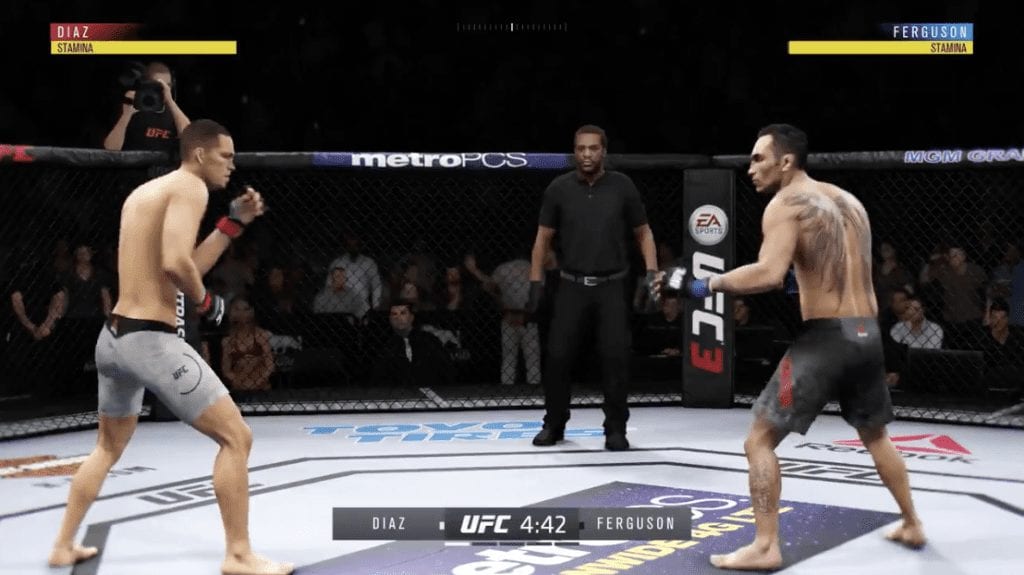 Overall, the new striking system greatly improves on what was here before, but it’s precisely what came before that mars what is otherwise a fantastic new way to punch and kick. Because EA Sports UFC 3 is still using the Ignite engine for its gameplay, some of the animations for the punches and kicks are downright wonky. Contextual strikes from certain distances aren’t automatic so far too often fighters would get too close to each other, which resulted in stubby jabs and hideous attempts at head kicks being made.

Controls are still very dense and certain moves such as the uppercut and front kicks have been remapped to two face buttons to make way for the new movement system. Blocking has also been remapped and veterans may struggle with old muscle memory converting to the new system. I took many knockouts while still adjusting to the new controls.

There are a plethora of punches, kicks, elbows, and knees to choose from, and it definitely has a learning curve and requires time to get used to. Most of the moves here are standard MMA moves, but some of the more ridiculous and rare maneuvers such as the “Showtime Kick” are still present. Fortunately, there is a tutorial mode in which to practice striking, and I’d highly recommend taking time to learn the complex system to truly experience striking the way it was meant to be.

Another unsettling legacy issue is the ragdoll physics that have been a series mainstay. Fighters bend and fall in ways that would kill a real person and some of the knockout blows are pitifully misplaced. I’ve never seen a fighter get hit in the shoulder and go unconscious but they will in UFC 3. While it doesn’t take too much away from the marvelous work the team at EA has done, it does lessen the immersion and make it evident that future UFC games could benefit from a switch to the Frostbite engine if at all possible.

Speaking of something that needs to be changed and improved upon…

If you were a fan of the grappling and submission systems in EA Sports UFC 2, then you’ll feel right at home. The mechanics of each system are almost entirely the same. Takedowns are initiated by variations of the right stick, and left shoulder and trigger buttons. Defending the takedown is also exactly the same as before — as are going into submissions. In fact, this is where the gameplay in EA Sports UFC 3 starts to show cracks. With so much effort being put into the new striking system, having the same five-step submission mini-game is a disappointment.

For those that hate navigating the octagon-style submission system, the alternative is a clunky and nonsensical button mashing input in which both players mash the X/A button to try and either advance or block the attempt. The game simply doesn’t do a good enough job of letting players know whether or not they’re winning.

Speaking of winning, far too often I would lose dominant top position with a wrestler to a fighter with far lower attributes. In fact, all of the diversity that is found in the stand up disappears when the fight is taken to the ground. Even online, many players would forego going to the ground after a knock down in favor of bringing the fight back to the feet where the action is more nuanced and varied. In a sports simulation where grappling and submissions are a huge portion of the action, having a system that is unchanged and not particularly balanced or fun is a problem.

It’s not all bad, however, as the grappling stamina has been addressed so that players can no longer spam transitions without losing a significant portion of stamina when getting blocked. It makes the grappling slightly more strategic, but most of that time was spent biding my time until I had enough stamina to get back to my feet. There are also some seriously cool looking submissions, so if a player can actually pull one off it provides a slick looking finish. 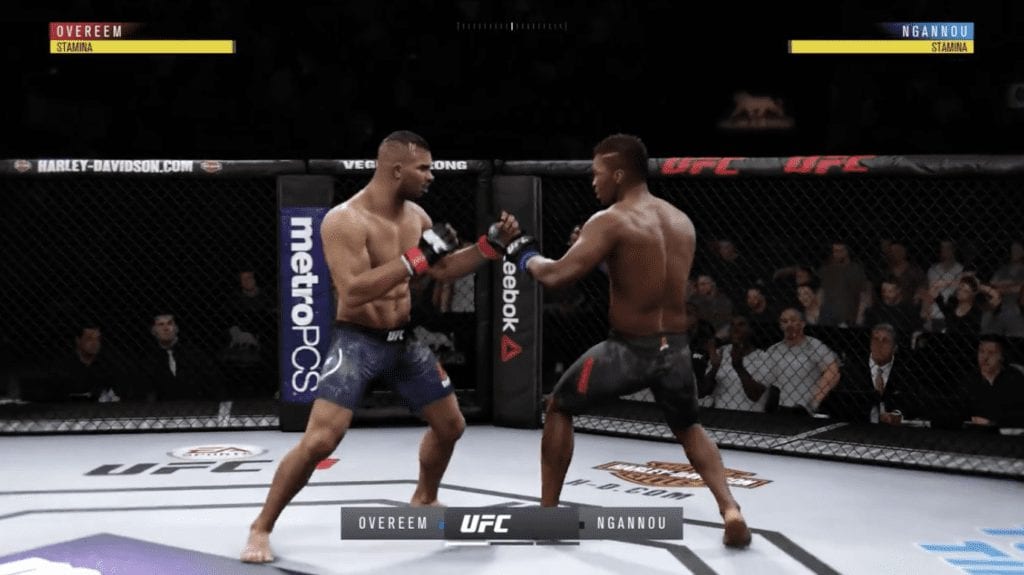 Computer difficulty ranges from Easy to Legendary. For fighters new to UFC games, going at it on easy is a good way to explore the different moves and strategies in the game as the CPU rarely attempts offense and leaves itself vulnerable to attack. Normal bumps up the difficulty a bit but it’s still fairly easy to take out the CPU opponent within the first two rounds. At these first two difficulty levels, there is also an on-screen indicator during grappling that will alert the player to which direction the A.I. is attempting to transition to. This is a great training tool to be able to use the arrow in addition to the visual cues of the CPU fighter’s body to memorize transition defense for the higher difficulties.

At the top of the mountain is Legendary difficulty. Here the CPU downright cheats. They block everything and it can be a chore to pull wins out at that level. Players far more skilled than I am may find that they enjoy the challenge of Legendary (CPU vs. CPU fights at Legendary are a treat to witness) but the sweet spot seems to be Pro difficulty for me.

Here the CPU will give a stern but fair challenge. At this level, fighters like Tony Ferguson and Matt Brown are wild and crazy, and will take the fight to you on their feet; while fighters like George St. Pierre and Khabib Nurmogomedov will take you to the ground and try to pound you out. By no means is it a cakewalk but fights seem fair, and even taking losses was enjoyable at times as it left me with a desire to dive right back into the Octagon. 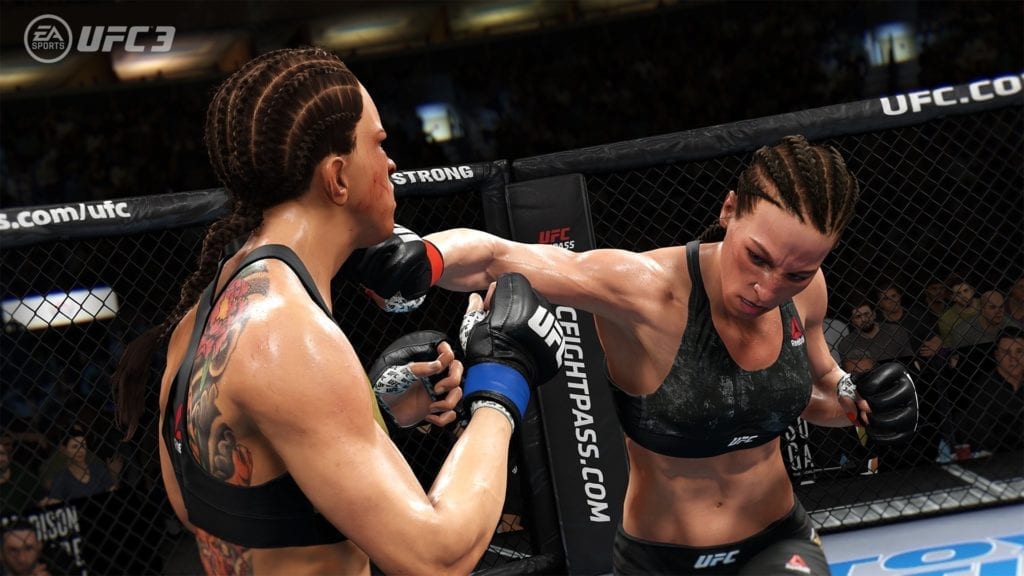 Despite some legacy issues and missteps, EA Sports UFC 3’s gameplay is an improvement upon its predecessors. The new striking system is an absolute blast and more than ever puts players in the gloves of a UFC fighter. Each fight is a unique experience and that variation will keep players coming back for more.

It’s disappointing that the grappling and submission systems are unchanged as they are in need of an overhaul. EA has been very good at balance patching in previous iterations and could stand to do the same for the ground game even if that’s only a quick fix.

In the end, UFC 3 is still an incredibly fun fighter with a diverse roster and is an enjoyable game to play both with friends or solo. Stay tuned for the career mode breakdown in the coming days.