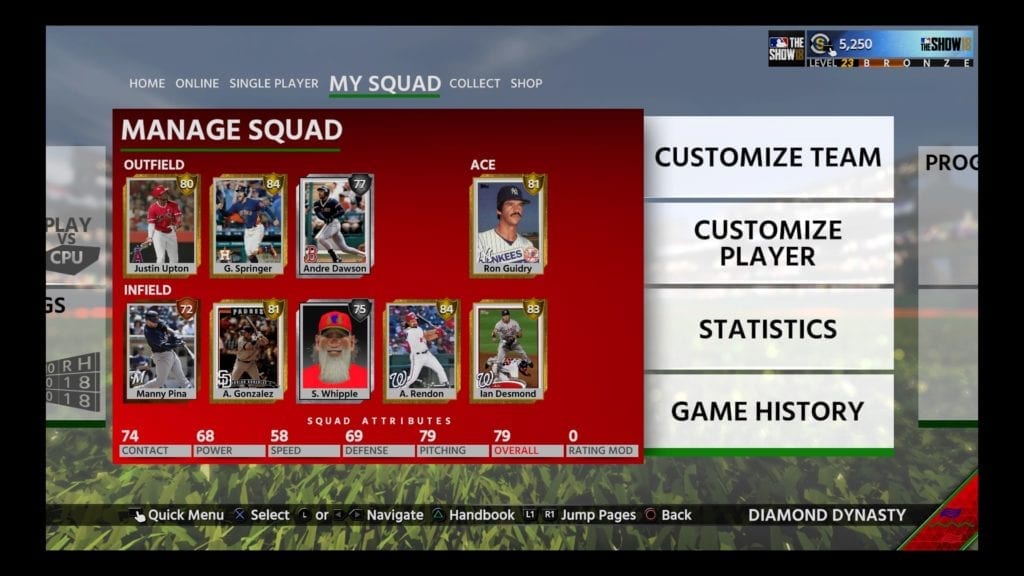 Digital card collectors, rejoice! MLB The Show 18’s release this week means that Diamond Dynasty has returned to consume countless hours of time that go by virtually unnoticed as you grind missions and gradually improve your team. This year’s version may not exactly re-invent the wheel or anything when it comes to these kinds of Ultimate Team modes, but it does refine and improve upon what was already arguably the best of the bunch among the major sports titles last year. It accomplishes this with a more intuitive layout, a healthy assortment of missions and programs, and a welcome overhaul of how you build and progress a created player within the mode.

The big question on everyone’s mind coming into First Pitch weekend was the same as it is always upon the game’s release: how would the servers hold up? To practically everyone’s surprise, things went off mostly without a hitch. Sort of. Everything was fine for the first couple of days at least, until an update was released that led to some people losing stubs and items from their collection. And then the servers went down. And then they went down again. And then again. To be honest, it felt just like old times really.

In fairness, while there are undoubtedly some issues that still need to be resolved for those who lost anything from their collection, it still wasn’t as bad a launch as some of the server shenanigans in the past where playing the game online was pretty much an impossibility for the first few days. In fact, it was a downright pleasure to experience next to zero lag when navigating through the mode’s menus on the first night for a change.

The mode does a better job of laying out those menus as well, tying missions to programs in a way that doesn’t require you to have to continuously toggle between two different menus as you did last year. Furthermore, the missions themselves are presented in a fashion that allows you to easily understand which of the myriad programs feed into other programs, so you’re never at a loss as to what you should be doing next.

There’s certainly an argument to be made that the mode could still do a better job of keeping you aware during a game of what’s required of players to complete a mission with some sort of notification, but overall this is a step in the right direction. 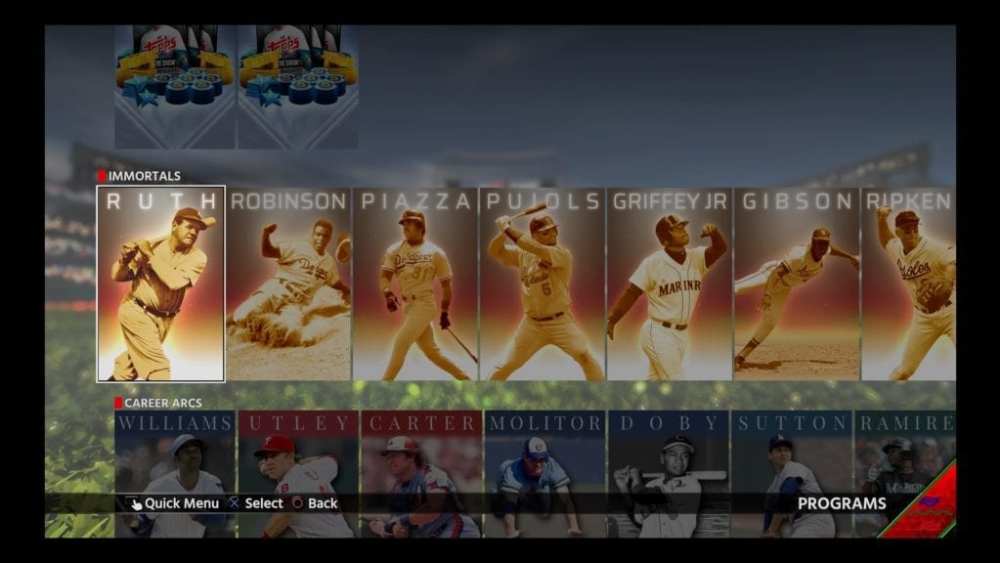 Given the overwhelming number of options of how to play in Diamond Dynasty, I thought I’d start out with Conquest, a single-player mode to ease me back into the swing of things. Not too much appeared to have changed on the surface in Conquest this year, but once I started taking strongholds and unlocking players with missions to be completed, there was a slight twist. There’s an increased emphasis on fulfilling stats in a single game this year as opposed to compiling these over as many games as it takes.

While getting a couple hits in a game with a player might be easy enough (even with Conquest games only lasting three innings), there are more difficult challenges like getting two hits AND a stolen base in the same game with Matt Kemp. And don’t even get me started on trying to get two hits, including a double, with George Brett. Let’s just say that mission still needs to be completed. There’s even a new Conquest Extreme that can be tackled after completing the first part of Conquest, which increases the difficulty level by having you try to tackle strongholds in a limited number of turns.

Elsewhere, other modes are largely unchanged but remain as enjoyable as ever. Ranked Seasons will have you go head-to-head online against others in an attempt to climb a series of tiers for better rewards. Battle Royale has you draft your team over a series of rounds and then play three-inning games to try and go on a winning streak for increasingly valuable rewards. This can give you the chance to try out some elite cards without having to shell out the stubs for them. For instance, I won my first game on an exciting walk-off homer in the bottom of the third by legend Vlad Guerrero.

There are also upcoming events with specific entry requirements to be played in Diamond Dynasty (including an Opening Week one that’s just started), or you can always play the CPU to fulfill certain missions or even just to hone your skills.

One of the biggest changes that many players of The Show will have to get accustomed to is navigating the marketplace on the actual game rather than at The Show Nation website. In the past, lag and general instability made using the marketplace within the game a chore while using the website was a relative breeze. Things have flipped this year; the marketplace within the game is quick and responsive while The Show Nation website…well, it has limited functionality at the moment that makes it impossible to even see an inventory of what cards you currently have.

There are also new items to collect this year, including hats, jerseys, autographs and bobbleheads. While some may gripe about these being nothing more than empty tokens that are never even used in games and have only been designed to get more people active in the marketplace, others may find amassing bobbleheads to be fun and simply another route to complete missions and unlock new players for your team. It was only soon after the game’s release that an astute reddit user posted about how easy it was to collect enough hats to unlock a David Price reliever card that was pretty popular last year. Sure enough, the price of hats on the marketplace surged soon after. Don’t sleep on how acquiring collectibles can improve your squad.

Of course, that’s the ultimate goal: to get better players. But there seems to be an emphasis this year on separating the truly elite legends from the rest of the pack (which is probably why attributes are capped at 125 this year instead of 100), meaning that there’s now an abundance of middle-of-the-road cards that each have their share of strengths and weaknesses. Ideally, this should help to keep the online matchups rather balanced, at least until the real die-hard players begin to unlock some of those immortal legends (which thankfully can’t be purchased via micro-transactions) and trot out their squads full of diamonds.

It also can’t help but be a little disappointing to find some of the same legends as last year within Diamond Dynasty. While there are naturally plenty of new ones as well, some of the missions may end up feeling a bit like re-runs for anyone who played Diamond Dynasty in MLB The Show 17 (or maybe I’ve just had my fill of Eric Karros at this point). 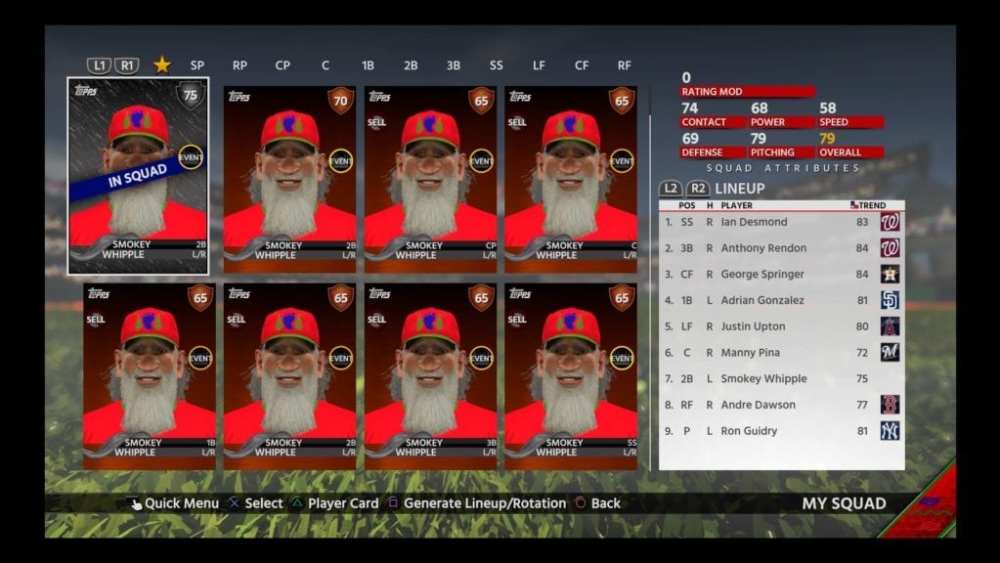 Those familiar with Diamond Dynasty will notice a distinct change in how to create and progress a player this year. Previously, this could be accomplished by simply feeding all of the cards you didn’t want into your created player and watch him quickly become a 99 OVR beast that other teams surely loathed having to face. This has been replaced with a progression system that’s based largely on accumulating stats with your created player, and then making a few key choices along the way to determine what kind of player you want your creation to become.

Of course, you’ll first want to use the robust system of customizing your player by giving him a name, unique physical attributes and even his own trademark swing with the new swing creator. When you’re done, you can plug your player into any position you want, where he’ll start each one with an overall rating of just 65.

Completing your initial missions will see you jump first to a 70 and then a 75 after another set of missions, eventually leading to decisions down the road on what attributes (contact, power, speed) you’d like your player to develop as strengths. It’s a much slower and harder progression system than the last one and it’s also far more rewarding than simply getting rid of your lesser cards until you’ve created a monster. It could probably stand to have you make decisions a little earlier in your player’s progression (perhaps after every stage of development even) but it’s quite satisfying for its first year of implementation.

With MLB The Show abandoning its online franchise this year, there was perhaps more pressure than ever for the game to deliver on the Diamond Dynasty front and it thankfully doesn’t disappoint. Building on an already stellar foundation, the mode uses a few key innovations and tweaks to create a wholly immersive team-building experience with a variety of ways to get your baseball fix while presenting challenges that should keep players busy for the entire season.