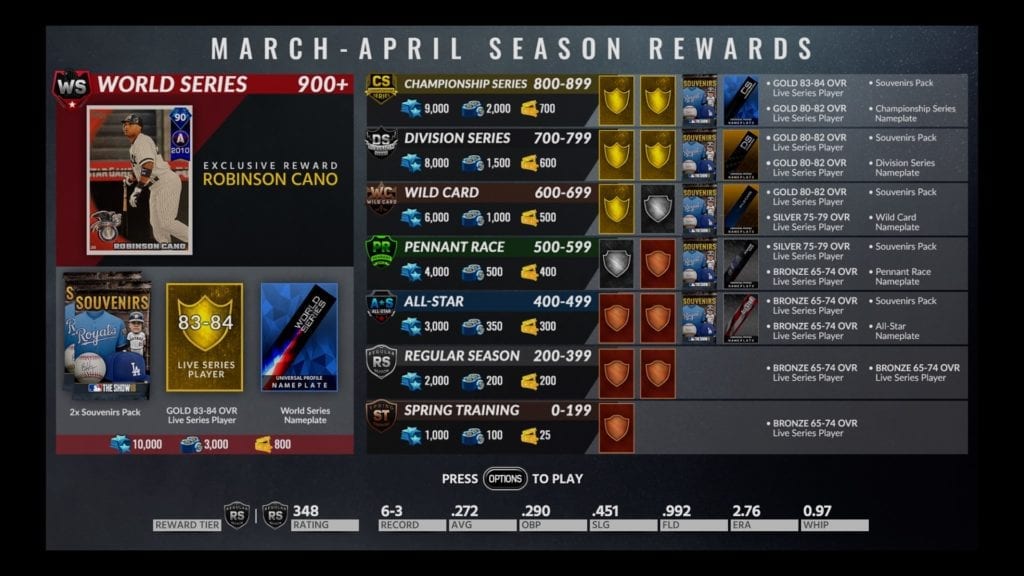 While it may look at first glance like not too much has changed this year in MLB The Show 18’s card-collecting Diamond Dynasty mode, things are certainly different enough that building a team on the cheap isn’t quite the same as it was last year. With a host of new programs and missions to keep you coming back for more, this year’s game has made the grind even more challenging than in the past, making it imperative that you use every tool at your disposable to aid you in the eternal grind for superior cards. With that in mind, let’s take a look at some keys to putting together a respectable squad that can challenge virtually any opponent with the kind of limited resources you’re bound to have as you initially begin putting players together.

Stubs and the Marketplace

One of the first things that you’ll probably notice this year if you’ve played Diamond Dynasty in the past is that stubs, the virtual currency used in MLB The Show, are harder to come by than ever before. With fewer stubs being doled out as a reward after finishing games within Diamond Dynasty, this means that you’ll have to be more creative in how you go about acquiring them.

You’ll likely want to spend some time between games exploring the marketplace and using it to help you accrue stubs that you can then turn into better players. The best way of doing this is by buying and selling. While you might not get the greatest stub rewards for playing a game, you will usually get at least some sort of card reward revealed to you at the end (sometimes even two), though by and large it won’t be anything all that valuable. But you can at least transform it into more stubs by selling it on the marketplace, as there will always be someone looking to complete a collection.

Because MLB The Show 18 is a baseball game, chances are that you’ll actually want to get out there on the diamond and play a little instead of just buying and selling cards. The game has plenty of options to do this and they all come with different opportunities for rewards.

Ranked Seasons is probably the purest online game mode, where you can use the best cards in your collection to go head-to-head against opponents in full 9-inning games. These seasons usually last about a month or so and will see you trying to win games to climb to higher reward divisions. When the season ends, you’ll end up with the reward matching the highest division that you managed to reach (and not the tier you’re currently on when the season ends). The good thing is that in the lower divisions, losses won’t affect your ranking at all, so you don’t have to worry about digging yourself too big a hole.

If you’re looking for shorter games and a more balanced online experience, try out Battle Royale. This mode sees you playing 3-inning games against online opponents after first selecting your team in a 25-round draft. You’ll get a chance to try out some really good cards as you attempt to build a winning streak that will see you earn better rewards depending on how long a streak you can maintain, with 12 being the ultimate goal and two losses eliminating you. With an entry fee of 1,500 stubs and a high level of difficulty in reaching those 12 wins, Battle Royale will earn you at the very least a regular pack of cards upon elimination (which will cost you 1,000 stubs in the store anyway). If you don’t pull anything too great, don’t hesitate to turn them into stubs on the marketplace to try to recoup your cost of entry.

Events that run for a limited amount of time can be a no-risk, high-reward mode to get some better cards. The Opening Week event running right now, for instance, will have you playing 6-inning games against online opponents with rewards based on how many wins you can accumulate in one entry (again, two losses will get you eliminated, but you can enter again immediately at no cost) and over the course of the entire event. 35 total wins in the current event will earn you a diamond Lenny Dykstra, with other events to come in the future. Events may be rather time-consuming, as 35 wins can take a while depending on your ability, but they’re ultimately worth it if you can score a diamond at no cost.

If you’re more into playing a CPU opponent, conquest is a great place to earn some nice gold and diamond card rewards. It will see you claiming territories and strongholds as you make your way across the map like a baseball version of Risk while playing 3-inning games on varying difficulty levels. Once you complete all of the conquest missions, proceed to extreme conquest for even greater challenges and rewards. Also keep an eye out for missions outside of conquest that will require you to play full 9-inning games against the CPU on a specified difficulty. 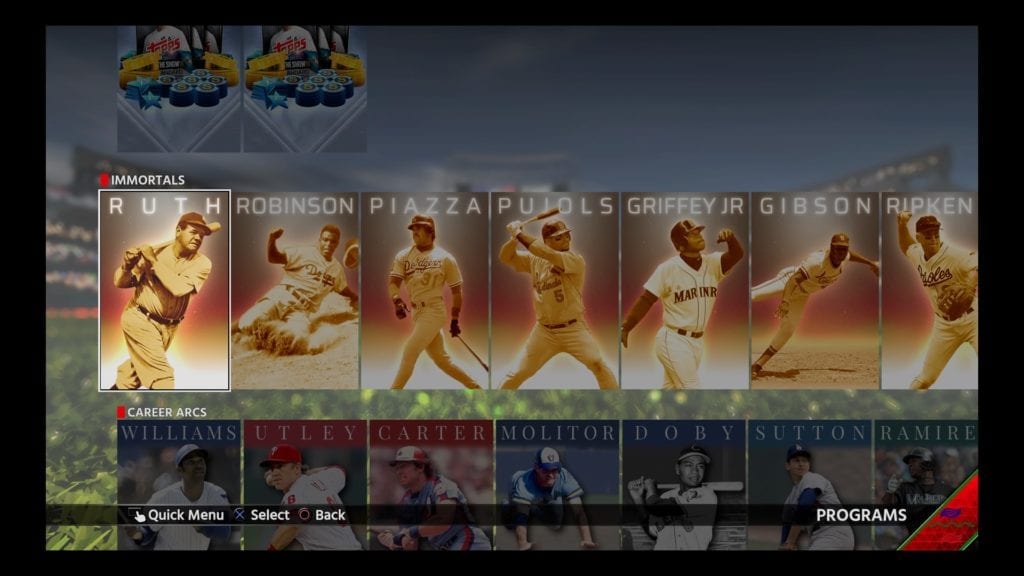 Simply put, there are an overwhelming number of programs within Diamond Dynasty and you may be at a loss as to where to begin. Because many of the programs feed into each other, the best place to start would be with the bronze and silver positional programs, which generally require you to trade a hat and a jersey, exchange a few different cards from the same position and meet a statistical requirement with the player. If you complete these, they will help you unlock players from the career arcs which in turn will help you unlock those immortal legends that are the most coveted cards in the game. But be aware that there are some missions in the career arcs and immortal legends that you can begin grinding before you even finish with those positional programs, so feel free to get started on those early as they are going to take a while.

New to Diamond Dynasty this year, it’s likely that you’ll be annoyed by the sheer number of collectible souvenirs needed to complete certain exchange missions, including hats, jerseys, autographs and bobbleheads. But no matter how you feel about these souvenirs, they can still be used to your advantage. As you accumulate souvenirs, you can use them to build collections that will earn you rewards as you progress. Or, if you’re like me, and you couldn’t care less about things like hats and bobbleheads, feel free to largely eschew the option of using them in collections (at least at the outset) and just look at them as a commodity like any other that can be sold for stubs on the marketplace. You’d be surprised how much you can get just for a team’s alternate hat or jersey.

Similarly, while you do want to save some of your player cards to build towards the team collections, it’s a good idea to focus on selling cards from teams with pricey elite players where the entire collection is going to be too expensive to acquire for a while anyway. Instead, turn them into stubs that you can use to either purchase better players who can actually help your team or to start building towards more financially attainable team collections (like the Royals, Marlins or Twins for instance).

Also, make sure to monitor your daily missions as completing these will earn you souvenir rewards that you can use to build collections or sell for a profit. 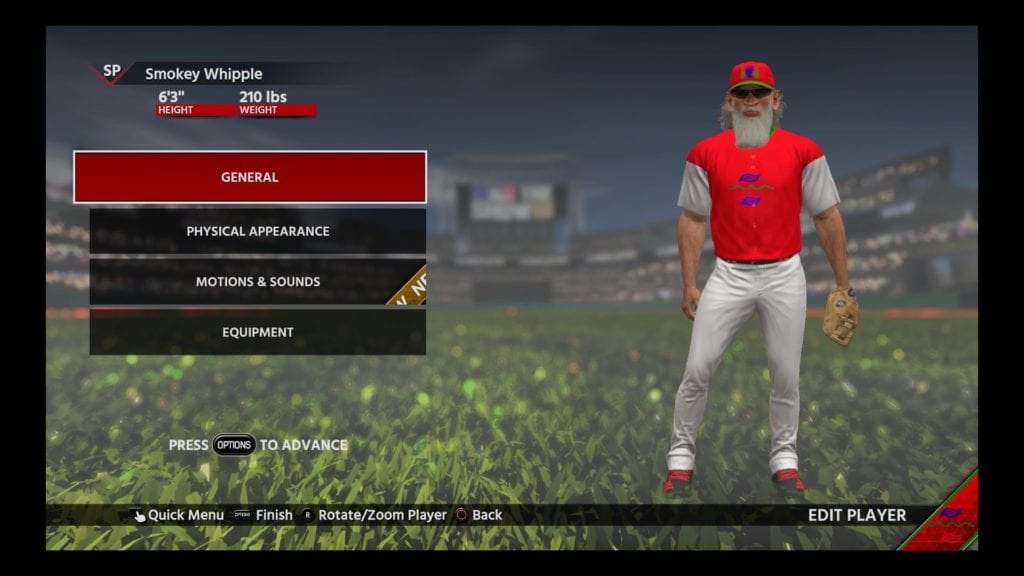 Don’t overlook what creating your own player can bring to your lineup either. It’s best to create your player to fill a position that might be a weakness for your squad (2B and C are usually positions that could use a shot in the arm) and then slowly start to progress him over a series of different stages. Unlike the past when you could easily feed unwanted cards to quickly progress your created player, it’s a bit more of a grind this year. But by completing missions and unlocking a series of different archetype cards, you will go from a 65 overall to a 70, then a 75, a 78 and so on, until you can eventually choose yourself which attributes you’d like your created player to focus on improving. Don’t forget to also equip your created player with any bats, gloves or cleats in your collection that can give him an attribute boost.

It may take a long time and a mountain of stubs to field a team that’s flush with diamonds, but if you grind efficiently and intelligently, there’s nothing stopping you from assembling a squad with a handful diamonds and a bunch of effective gold players in little time. That may not be quite as good as those who choose to shell out some real dollars to purchase an all-diamond squad but when you come up against those guys, you’ll have an advantage because you’ve already been through the grind and that’s made you better at the game.