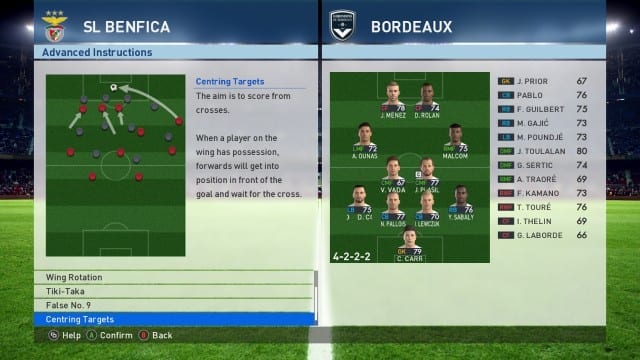 I’m addicted to Pro Evolution Soccer this year. In terms of gameplay, it finally feels like Konami has recaptured the essence of the series’ glory years, improving on its previous iteration to a substantial degree. PES 2017 is packed with brand-new additions that contribute to this, and Advanced Instructions is one of them. It’s a feature that makes the act of coaching a more streamlined experience, and if you can master this element of the game, you’ll have a big advantage over those who don’t even know it exists.

Let’s take this opportunity to break these instructions down and discuss this feature in detail.

There are seven attacking instructions that can enhance your tactical setup in PES 2017. They all possess different characteristics, and they also come with their own pros and cons.

There are only five defensive-based Advanced Instructions in PES 2017, but they’re all important to understand.

Achieving success with Advanced Instructions requires an understanding of how to combine them successfully. At any time, you can utilize two attacking instructions and two defensive ones. There are multiple combinations to consider, and here are a few examples.

What are your experiences with Advanced Instructions in PES 2017? Let us know.