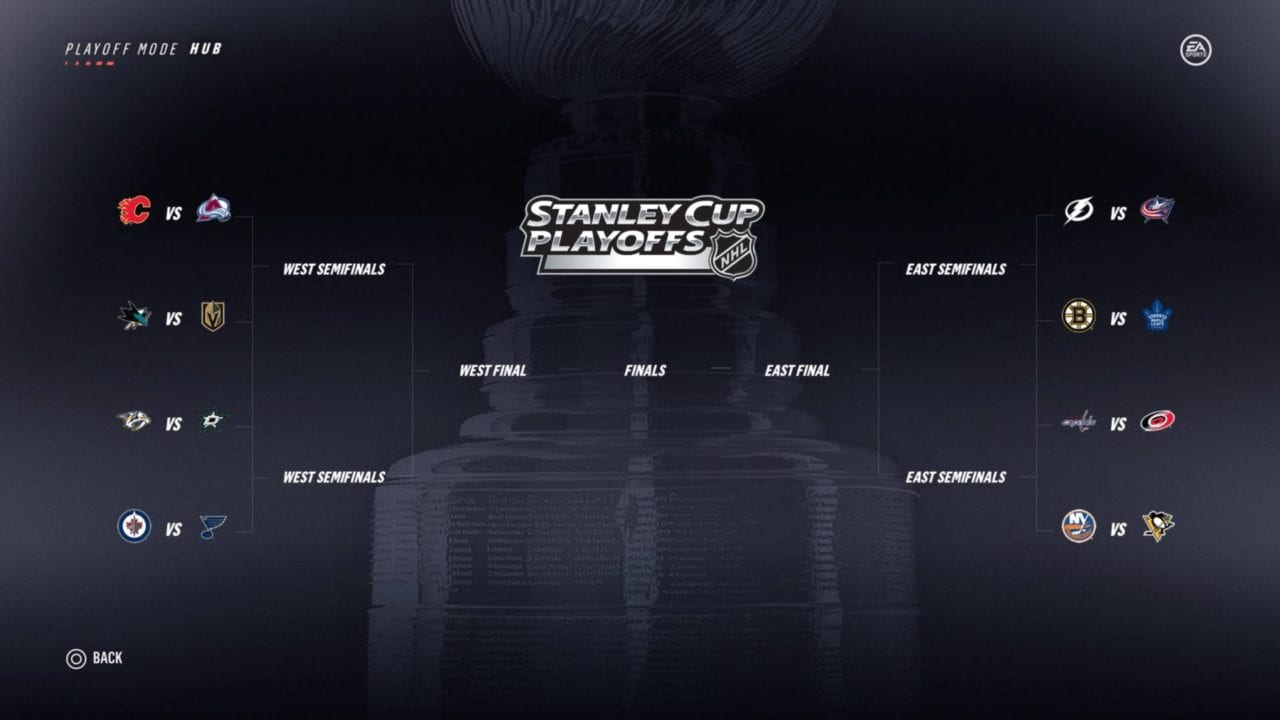 Now that the puck has officially dropped on the 2019 NHL Stanley Cup Playoffs, I wanted to do a sim of my own and see how the EA Sports NHL 19 results would shake out.

(The difficulty was set to superstar and all games were simulated)

Heading into the postseason, the Presidents’ Trophy winning Tampa Bay Lightning seemed to be heavy favorites to hoist the Cup. On paper, this looks like a huge mismatch but Columbus did add a lot of talent right at this year’s trade deadline. If their recent acquisitions can jell with their core group, they could give the Lightning some trouble in the opening round. Tampa Bay won all three matchups against the Blue Jackets in the regular season and outscored Columbus 17-3. Both teams are relatively healthy entering the postseason.

For the second year in a row, the Boston Bruins and Toronto Maple Leafs will face off in the first round. Just like last year, the Bruins will have the home-ice advantage. This proved to be a difference maker last year. Boston took three out of the four games from the Maple Leafs in the regular season and outscored the Maple Leafs by 6 goals.

Here’s what happened: The Toronto Maple Leafs defeat the Boston Bruins in 6 games.

Inside the series: This series proved to be a gritty series with only a combined 23 goals scored between the two teams. John Tavares carried the Maple Leafs offensively with 6 goals in 6 games, while David Pastrnak did all he could in a losing effort for the B’s with 6 points in 6 games. Tuukka Rask stopped 187 of the 199 shots he faced in the series while his counterpart Frederik Andersen stopped 172 of the 182 he faced. Both Rask and Andersen each recorded 1 shutout a piece.

The reigning Stanley Cup Champions face off against a team (of jerks) that is making their first appearance in the Stanley Cup Playoffs since 2009. The Capitals swept the Hurricanes this season going 4-0, only one game went into overtime. The Capitals with all their experience will be heavy favorites in this series but a young pesky Hurricanes squad may be able to steal a few games if they play to their strengths.

Here’s what happened: The Carolina Hurricanes defeat the defending champs the Washington Capitals in 6 games.

Inside the series: The Carolina Hurricanes’ depth proved to be the difference. The Hurricanes had 6 players score 2 goals in the series, and 19-year-old rookie Andrei Svechnikov led the way with 5 points in the 6 games. The Capitals meanwhile only were able to get one goal from Alex Ovechkin. T.J. Oshie led all Capital players with 5 points.

Islanders head coach Barry Trotz was able to get the best of the Pens last year on his way to hoisting the cup with the Washington Capitals can he do it again with a new team? The Pittsburgh Penguins were 2-1-1 against the New York Islanders in the regular season.

Here’s what happened: The Pittsburgh Penguins defeat the New York Islanders in 6 games.

Inside the series: Murray had a save percentage of .948 with a 1.43 GAA and shutout the Islanders twice in the series. Sidney Crosby, as per usual, led all Penguins with 6 points. Due to the performance of goalie Matt Murray, the Islanders only managed to have one player record more than one goal (Cal Clutterbuck). Mathew Barzal failed to light the lamp, finishing the series with just 3 assists.

The Flames finished first in the West this year recording 107 points, their most since recording 117 in 1998-1999 — the same year they won their only Stanley Cup. The Avalanche enter the playoffs as one of the hottest teams in the league finishing the season going 8-1-2. The Flames won all 3 matchups in the regular season.

Here’s what happened: The Colorado Avalanche defeat the Calgary Flames in 6 games.

Inside the series: Flames rookie goaltender David Rittich struggled with his first taste of Stanley Cup Playoff action, posting a sub .900 save percentage and a GAA of 3.36. Offensively, the Flames only had two players score more than one goal in the series. For the Avalanche, Nathan Mackinnon was dominant posting 10 points in the 6 games.

Both teams met in the first round last year with Vegas getting the better of the Sharks. Vegas went 2-1-1 against San Jose in the regular season but two of the games were played with San Jose starting their backup goalie. San Jose finished second in the league in goals per game with 3.52, Vegas was 13th.

Inside the series: The Golden Knights, despite getting some big offensive contributions from multiple players (5 skaters with 5-plus points), couldn’t keep the puck out of their net. Marc-Andre Fleury had a .884 save percentage. Logan Couture led San Jose with 8 points in the 6 games.

We could be in for a defensive showdown in this series. Both Nashville and Dallas are two of the best defensive teams in the NHL. Dallas finished with the second fewest goals allowed this season while Nashville has arguably the best blue line in the league.

Here’s what happened: The Dallas Stars defeat the Nashville Predators in 7 games coming back from a 0-3 deficit.

Inside the series: Both goalies posted save percentages of .920-plus but the line of Jamie Benn, Alexander Radulov, and Tyler Seguin was unstoppable. Seguin scored 7 goals in 7 games and added 4 assists for 11 points. Benn and Radulov each had 10 points. Meanwhile, the Preds only had two skaters score more than one goal.

St. Louis was last in the NHL in January but finished as one of hottest teams in the league. Winnipeg went 3-1 against St. Louis in the regular season.

Inside the series: Connor Hellebuyck had 3 shutouts in the 5 games. Winnipeg scored 18 goals in 5 games. Four different forwards had 3 goals. Brayden Schenn, Jaden Schwartz, and Vladimir Tarasenko combined for only 3 points. Alex Steen was the only skater to score more than one goal.