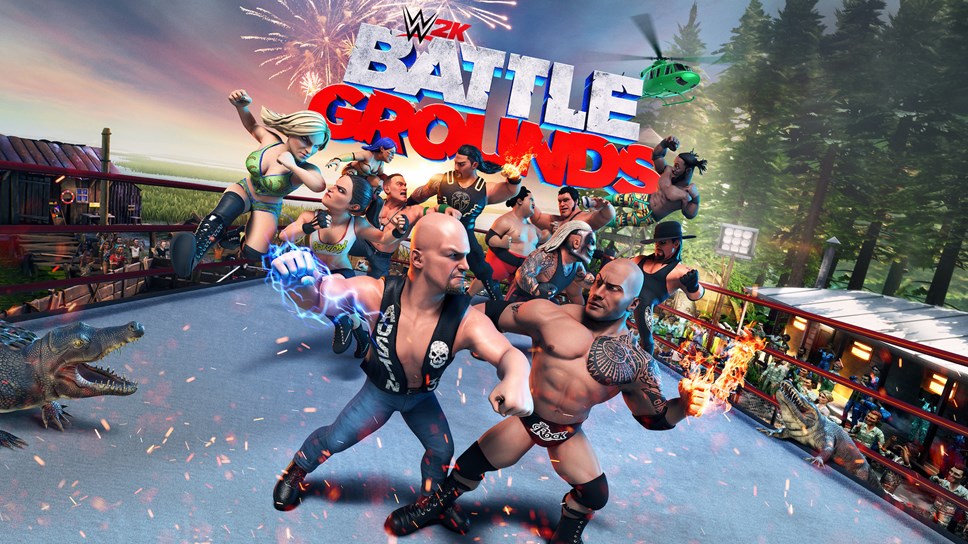 WWE 2K Battlegrounds is available now for Xbox One, PlayStation 4, Nintendo Switch and Google Stadia. For those of you that have purchased it, let us know your thoughts. We will have our review online soon.

A roster of more than 70 WWE Superstars, Hall of Famers and Legends will be available in WWE 2K Battlegrounds at launch, with more than 60 additional Superstars currently scheduled for future release via free** downloadable updates, including “Macho Man” Randy Savage, Ultimate Warrior, Ric Flair and many more. The deep and varied roster enables players to bring a myriad of dream battles to life, including Andre the Giant™ vs. Undertaker, Roman Reigns vs. The Rock, Charlotte Flair vs. Beth Phoenix, “Stone Cold” Steve Austin vs. John Cena, Edge vs. AJ Styles and many more. They can also create their own custom WWE Superstars in the Superstar Creator with different body types and sizes, facial features, clothing, hair and fighting styles. All Superstars utilize one of five class styles – Powerhouse, Technician, High-Flyer, Brawler and All-Rounder – with each class having its own combat moves, strengths and weaknesses. Arcade-style offensive and defensive power-ups, such as Flaming Fist, Ice Breath and Earthquake, offer an additional dimension of strategy that can quickly change the direction of a match.

A variety of game modes and match types are available in WWE 2K Battlegrounds, including King of the Battleground – an online, last-man-standing mode – and Battleground Challenge, where players take their customized creations from the Superstar Creator and compete in a series of challenges to unlock skill points, build up their abilities and earn cosmetic items. WWE 2K Battlegrounds also features a unique, single-player Campaign Mode, told through a comic book art style, where players team up with “Stone Cold” Steve Austin and legendary advocate Paul Heyman™ as they travel the world in search of the next WWE Superstars. Online multiplayer matches bring players together from around the world, while time-limited Online Tournaments offer rewards and a wide range of match conditions.

Energy, intensity and expecting the unexpected are all keys to victory in the world of WWE 2K Battlegrounds. Along the way, players can explore eight unique Battlegrounds environments featuring interactive elements and outrageous melee objects, such as squeaky toy hammers and motorcycles. Players will give opponents a tune-up in the Auto Shop by tossing explosive barrels at them and sending a car crashing down. The action heats up in the Everglades as players toss each other into the jaws of a hungry alligator! Players can also customize their own arenas to give each match a personal touch.

WWE 2K Battlegrounds is available in two formats: Standard Edition (MSRP $39.99) and Digital Deluxe Edition (MSRP $49.99). Players who purchase the Digital Deluxe Edition will receive WWE Hall of Famer Edge®; all versions of “Stone Cold” Steve Austin, The Rock and Ronda Rousey® unlocked at the beginning of play; 1100 bonus Golden Bucks, an in-game currency that can be used to unlock Superstars and cosmetic items.