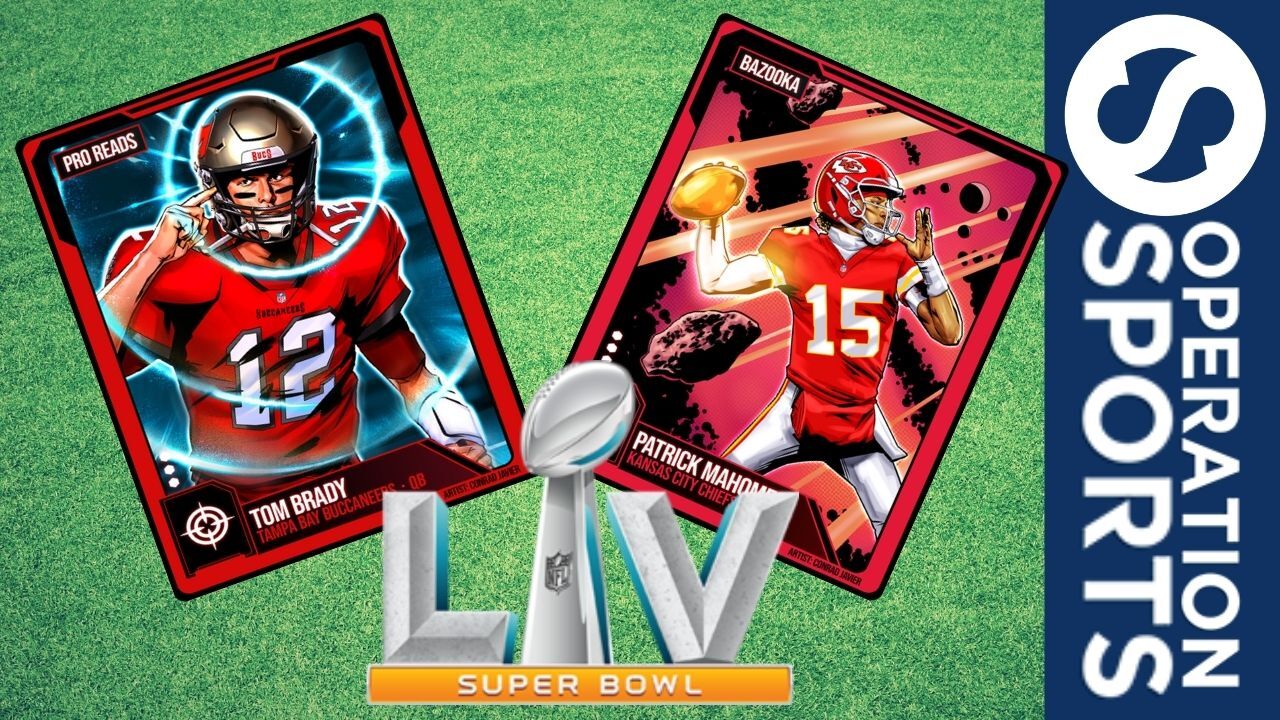 The 2020-21 NFL season will end today when the Tampa Bay Buccaneers and Kansas City Chiefs meet at Raymond James Stadium in Super Bowl LV. But before we get to sit back, relax, and watch “The Young Goat” Patrick Mahomes face off vs. “The Old Goat” Tom Brady for Lombardi Trophy, we’ve got to watch their virtual counterparts battle it out for all the e-glory in our (dual) Super Bowl LV Madden simulation.

Earlier this week, EA released its official Super Bowl LV Madden 21 simulation, but this one promises to be different.

Here’s our next-gen Madden 21 Super Bowl LV simulation between the Kansas City Chiefs and Tampa Bay Buccaneers. Below you can see both the simulation we did for our YouTube channel, and then this other one I will be writing about below. 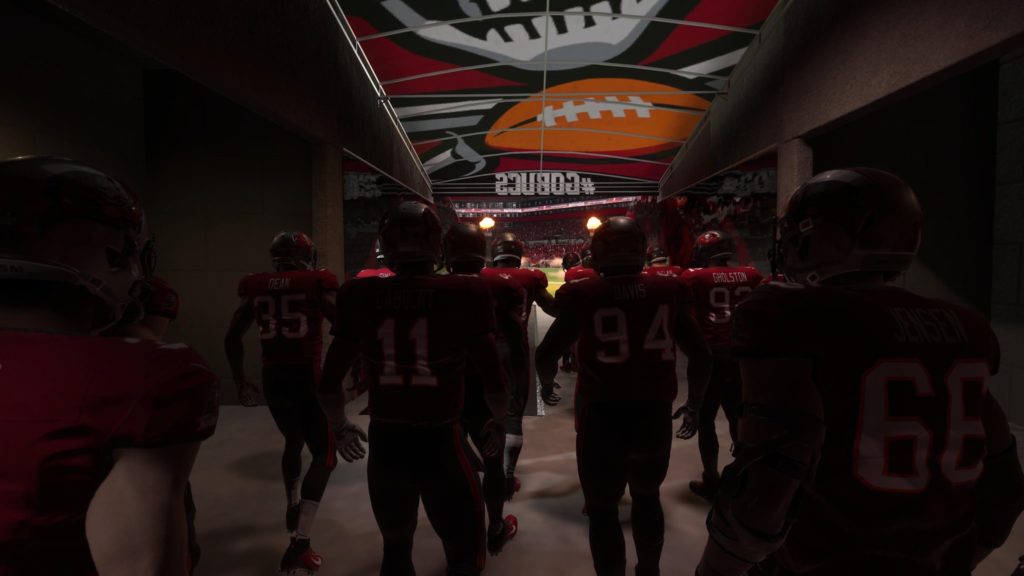 Bruce Arians’ team won the toss and elected to receive. This seemed to be for a good reason because the Buccaneers were ready to get this game started.

During the Buccaneers’ first drive, Tom Brady moved the ball downfield with relative ease. One completion after another, Tampa Bay marched downfield and into enemy territory. However, Tampa’s opening drive’s biggest play came on a big third down play at the Chiefs’ 44-yard line. Brady had all day to throw, which would be a common theme on the day, and this time connected with tight end Rob Gronkowski for the critical first down conversion. 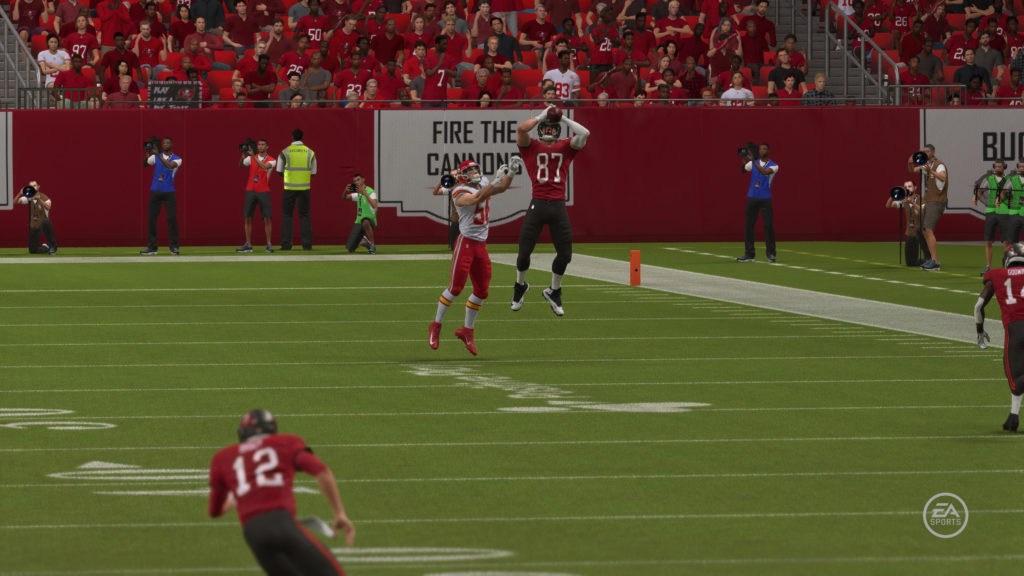 Brady would overthrow a wide open Mike Evans in the end zone for the easy touchdown on the next play. But like a wise woman (and some dude named Nietzsche) once said, “What doesn’t kill you makes you stronger,” and two plays later, TB12 found Mike Evans at the goal line. Two plays after that, Brady hit Rob Gronkowski wide open in the middle of the end zone for the first score of the game.

Virtual Andy Reid noticed what the Buccaneers did on their opening possession and wanted to prove to the world the Chiefs were capable of going toe-to-toe with the greatest of all-time.

But that didn’t mean the Chiefs would get all pass-happy, no. It actually meant the opposite, as the Chiefs came out looking to control the clock and establish the run. Which, if I’m sincere, is the exact opposite of what I expect to see in Sunday’s contest. Nevertheless, the Buccaneers forced the Chiefs to go three and out, and before long, Tom Brady and the Tampa Bay Buccaneers had an early 10-0 lead. 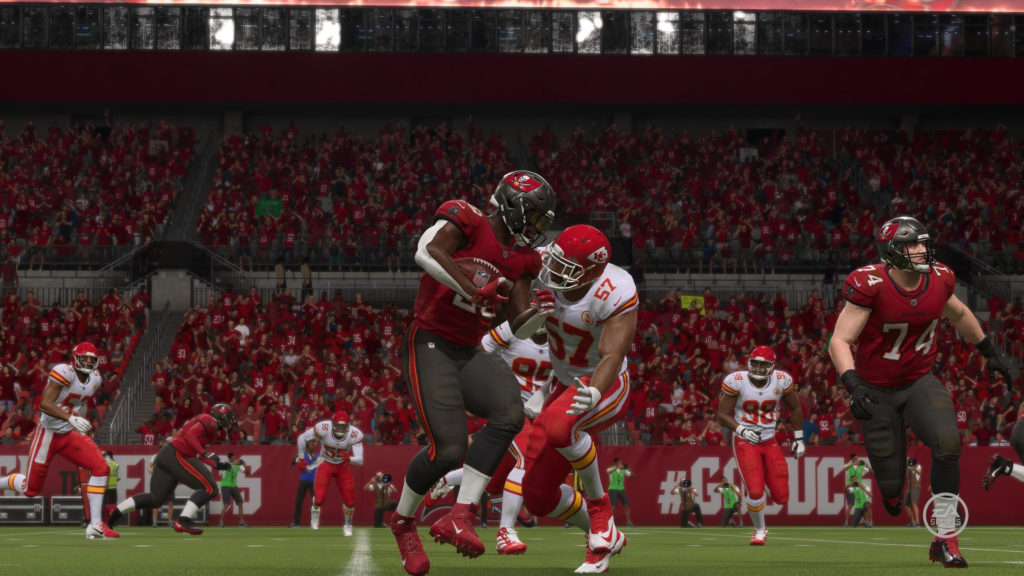 Kansas City’s next drive was much different than the first.

Patrick Mahomes connected with Tyreek Hill for a 23-yard completion. He then followed it up with an 11-yard scramble on first down. 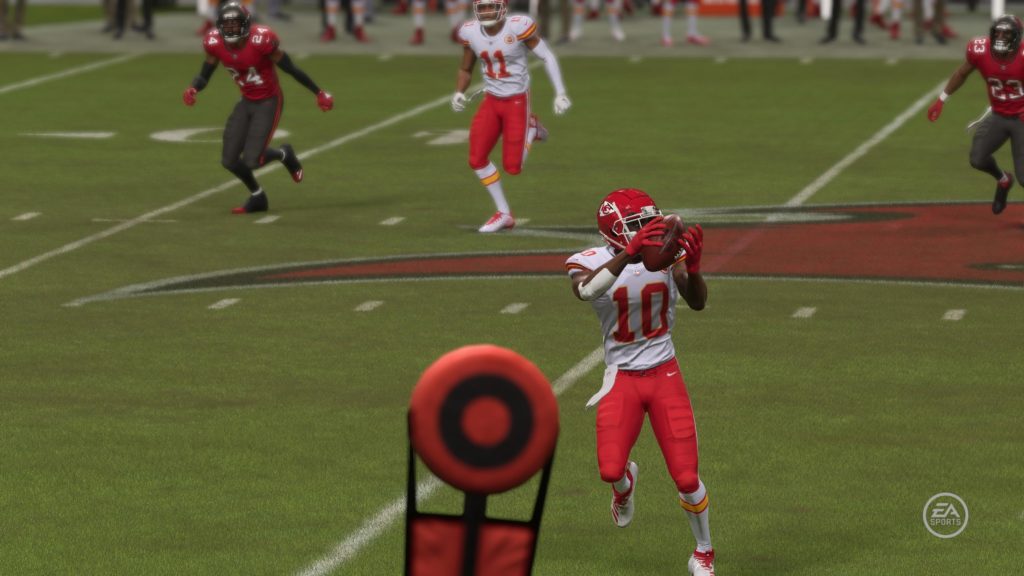 But it wasn’t Tyreek Hill who Andy Reid looked to get more involved in the Chiefs’ offense. It was Sammy Watkins that Kansas City’s offensive play caller would look to get more involved. This would start first on a 10-yard end-around. They then followed it up two plays later with a WR screen. This was the Chiefs’ best drive of the day. But like we saw early on in this contest, the Bucs were able to do just enough. On third and two from midfield, Clyde Edwards-Helaire was stopped in the backfield for a short loss.

Kansas City was forced to punt.

The Chiefs defense forced an unusual three and out and got the ball back with tremendous field position.

This time, Patrick Mahomes and the Chiefs’ offense did do enough to get the team in field goal position. Harrison Butker converted on the 49-yard field goal attempt, and the Chiefs were finally on the board. 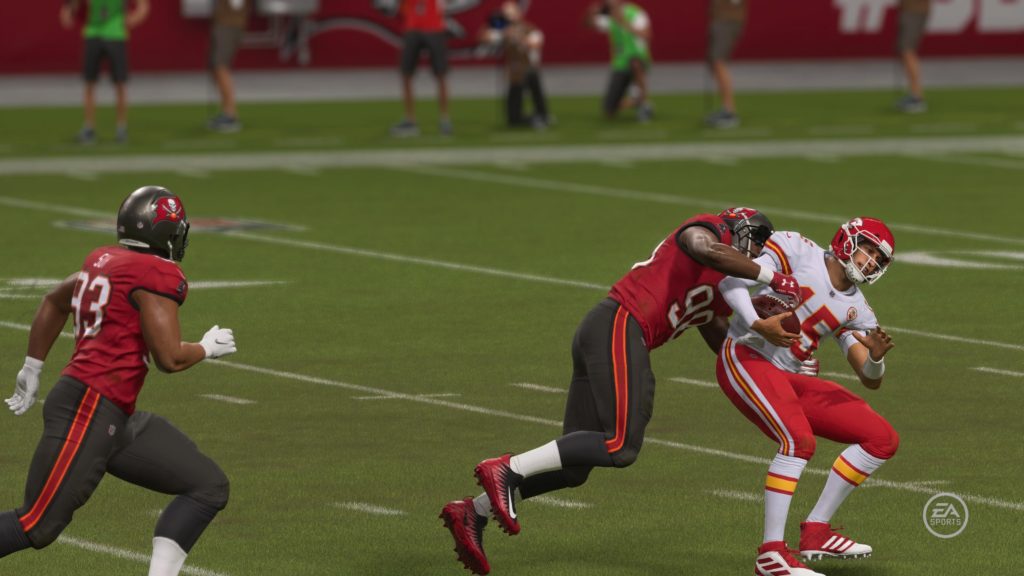 After an impressive kick return by the Buccaneers on the ensuing kickoff, Tom Brady looked to add to the one-score lead.

First, the Buccaneers picked up back-to-back first downs on the legs of Leonard Fournette and Ronald Jones. Three plays later, Tom Brady made one of the best throws of his young career.

Bucs’ defensive tackle Vita Vea flushed Brady out of the pocket. However, that did not stop the 21-year veteran from making one of the most insane throws I’ve seen in next-gen Madden. Brady nailed Rob Gronkowski, who soared up and made the catch in double coverage. 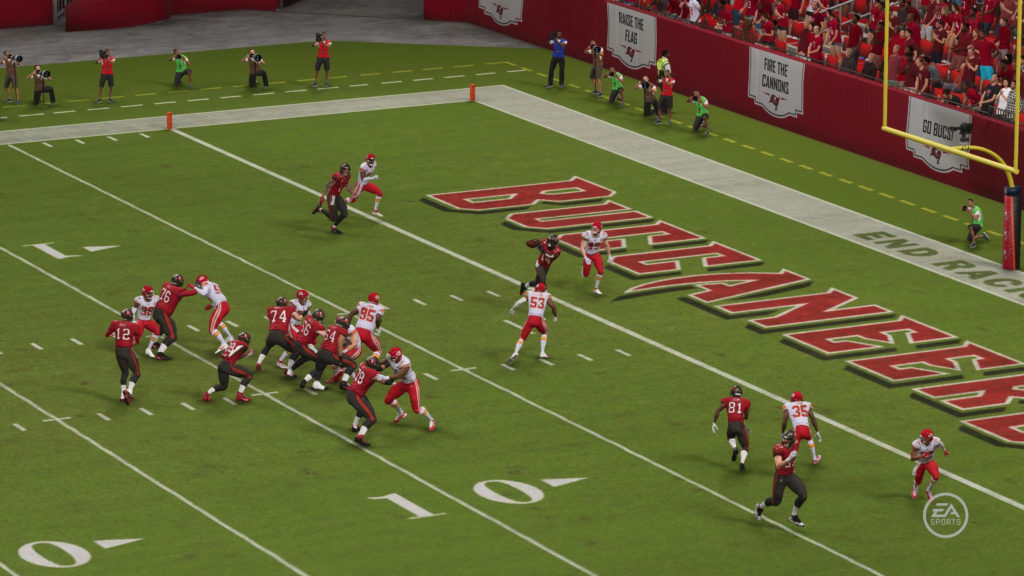 The first thing the Chiefs tried to do on their next possession was establish the run game, but this did not work and did nothing more than bleed precious seconds off the play clock. For me, the biggest difference throughout the first half was the pass rush for the Bucs. It was relentless and found a way to make Mahomes uneasy for most of the game.

But on a crucial drive before the half, it was non-existent. Mahomes stood tall in the pocket and found one receiver after another. First, Travis Kelce down the seam, and then to Demarcus Robinson for a big completion.

Mahomes would then throw an absolute dot to Tyreek Hill in the corner of the end zone for six. 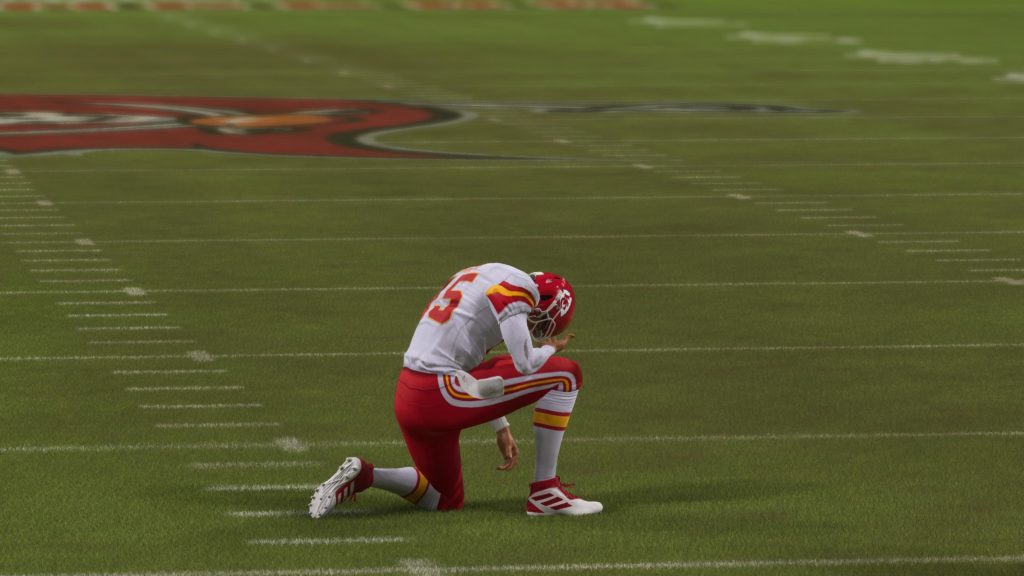 Despite trying to establish a run game for most of the first half, virtual Andy Reid woke up and realized that if his team wanted to win back-to-back Super Bowls, he would need to open things up a bit more. Bruce Arians’ defense had other things in mind as they forced the Chiefs offense to go three and out.

Tom Brady marched onto the field after a Kansas City Chiefs punt and decided he would try to catch KC’s defense off guard. The Chiefs were ready and sitting patiently on the comeback route. Bashaud Breeland read Brady’s eyes and jumped the route, leading to the pick-six and tying the game up at 17 all. 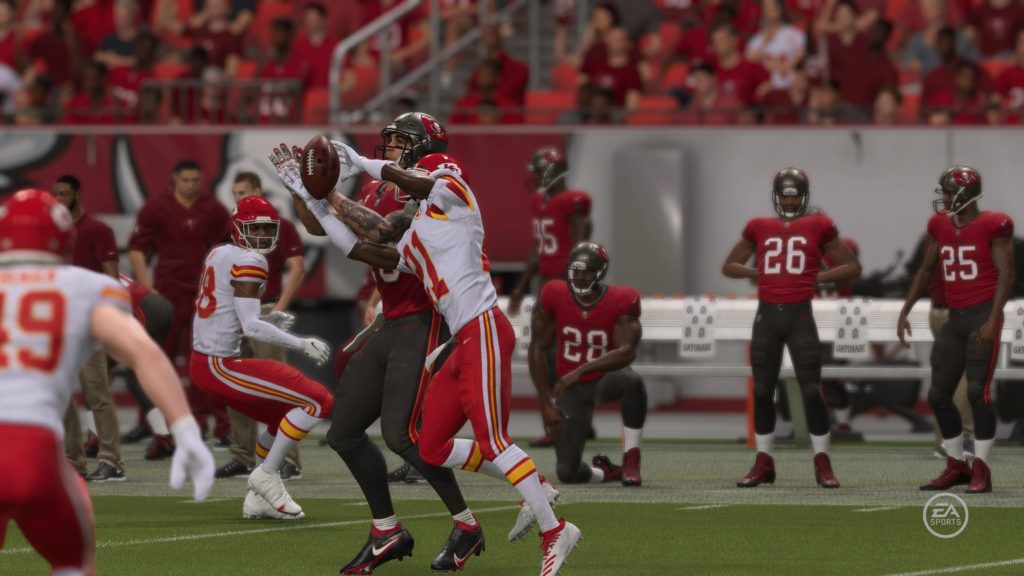 Tampa Bay would go three and out after Tyrann Mathieu dropped Ronald Jones in the backfield on third and one.

Kansas City’s next drive started with a two-yard run by Le’Veon Bell, followed by a Patrick Mahomes incompletion. On third down, Mahomes would be hit while trying to find an open Mecole Hardman in the middle of the field. The ball bounced around like a pinball before deflecting off a defender’s helmet and into the waiting arms of Ndamukong Suh.

Two plays later, Scotty Miller showed that he was faster than Tyreek Hill, scoring from 39 yards out on a crossing route.

Miller’s touchdown gave the Buccaneers the lead once more. 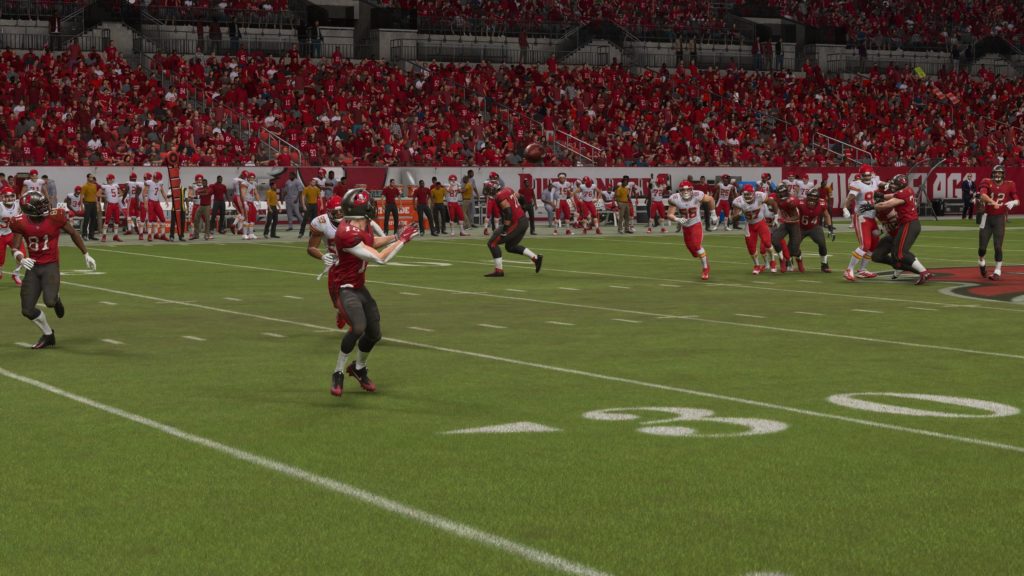 The Chiefs would get the ball back with under two minutes to go in the third quarter, and if they had any hope of hoisting the Lombardi, they would need to do something fast. 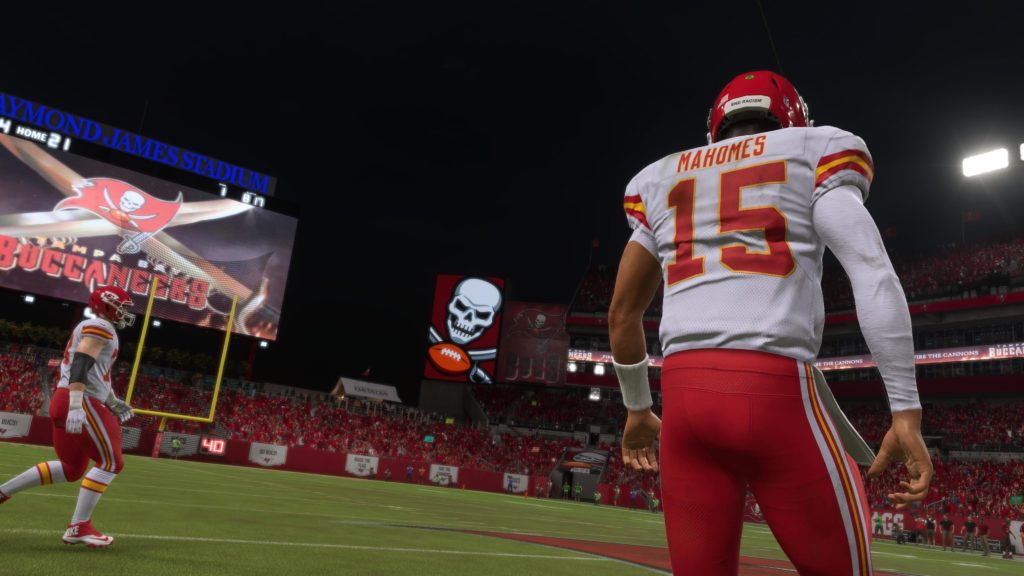 Tampa Bay’s defense came up big on third down, but a phantom roughing the passer call kept Kansas City’s drive alive. And I must say, to watch Patrick Mahomes get a random flag to keep a critical drive alive in the Super Bowl vs. Tom Brady is the perfect way for this game to continue. On the very next play, Reid dialed up a perfectly timed HB screen that netted the Chiefs 15 yards.

But wait! Another roughing the passer penalty. The ball is now on the Buccaneers’ 47-yard-line.

Two plays later, Mahomes tried to find Mecole Hardman in triple coverage, and the ball was almost caught inside the 10-yard line. Incomplete.

On third and eight with under four minutes to go, Mahomes pinged Demarcus Robinson on the drag route for a nice pickup. Reid dialed up an end-around to Tyreek Hill on the next play, Hill made one defender miss, spun out of another tackle, and zoomed into the end zone. 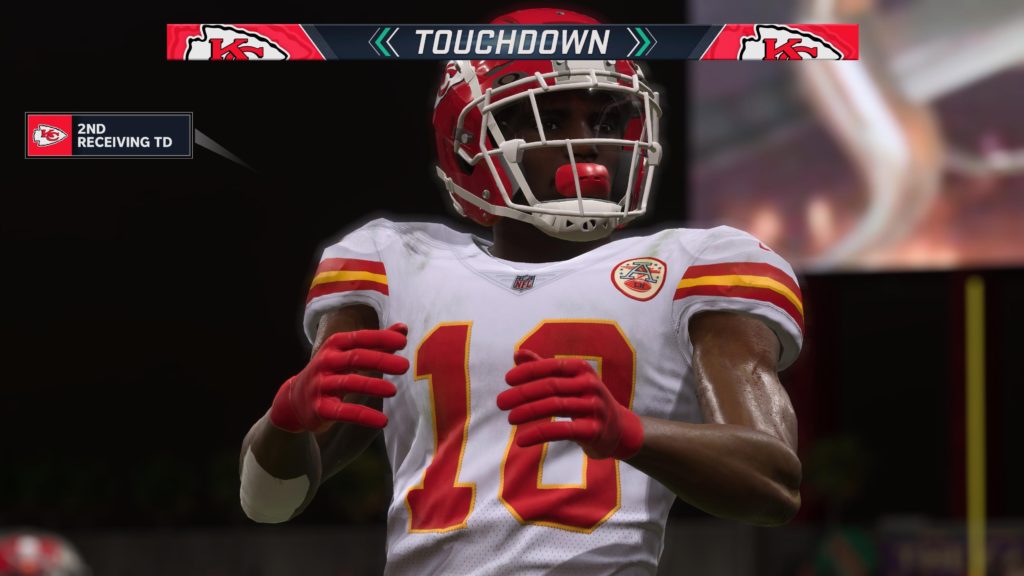 We all know how this is going to end.

If you guessed Tom Brady would march down the field and allow the Buccaneers to win the game as time expired, you guessed right. 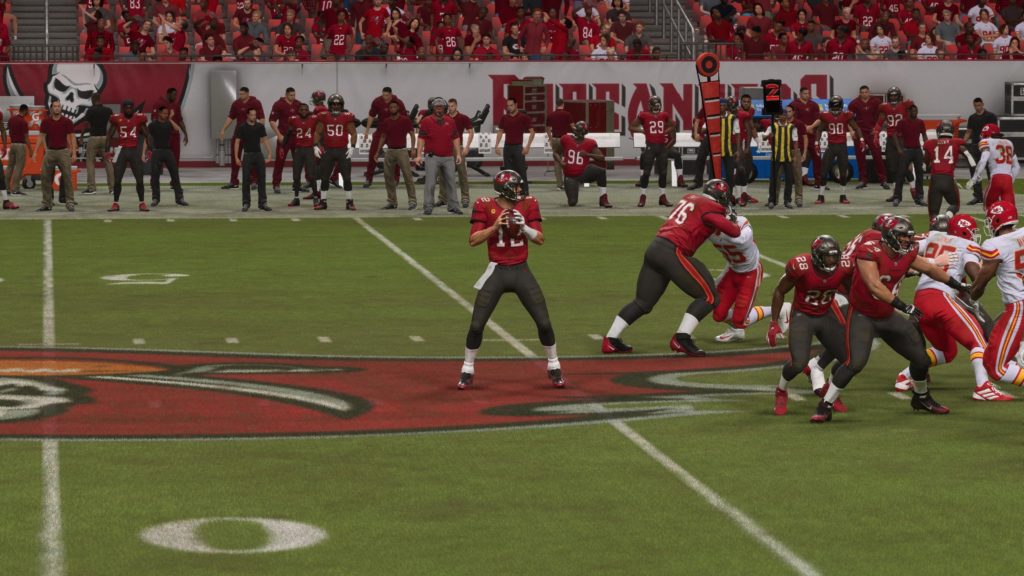 First there was a completion to Mike Evans. Followed up by another to Scotty Miller. Tom Brady and the Bucs’ offense were already at midfield with less than a minute to go.

Two plays later, Brady hit Rob Gronkowski in the middle of the field for a 23-yard pickup. Three Leonard Fournette runs later, set us up for the most critical field goal in Next-Gen Madden history!

Like Adam Vinatieri did so many times before, Ryan Succop drilled the 49-yard field goal to give the Buccaneers the win. 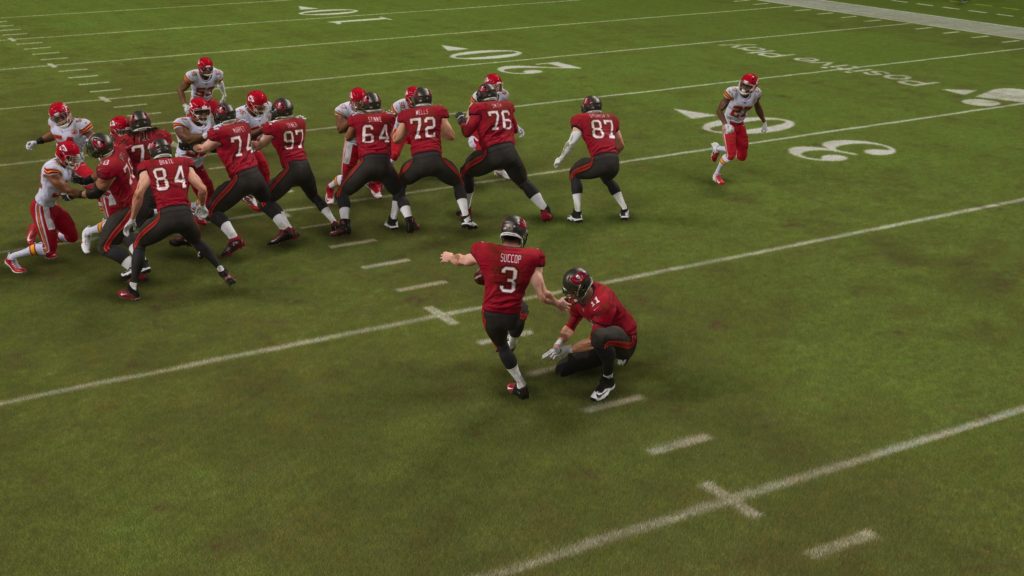 Cue the confetti and cutscenes 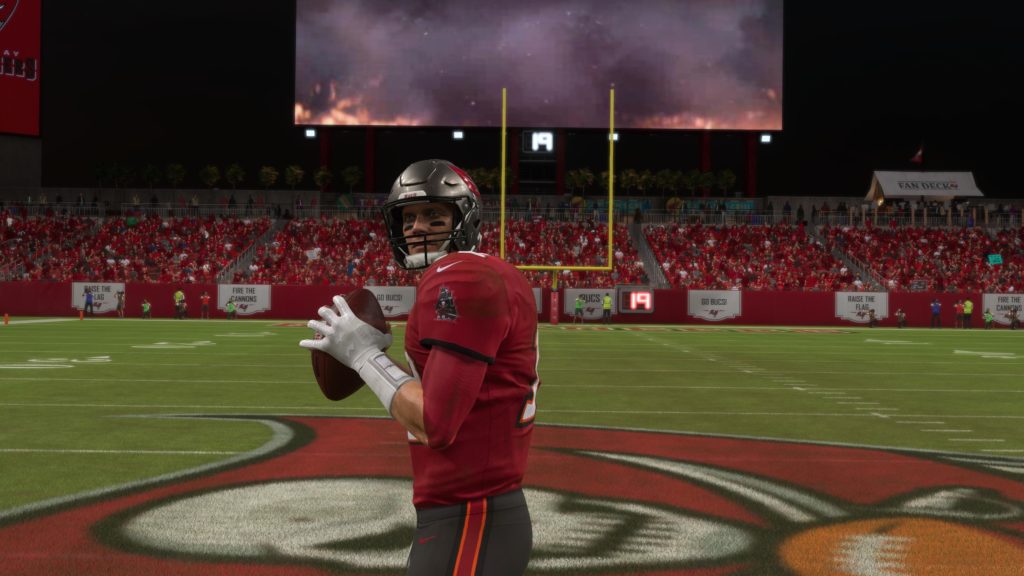