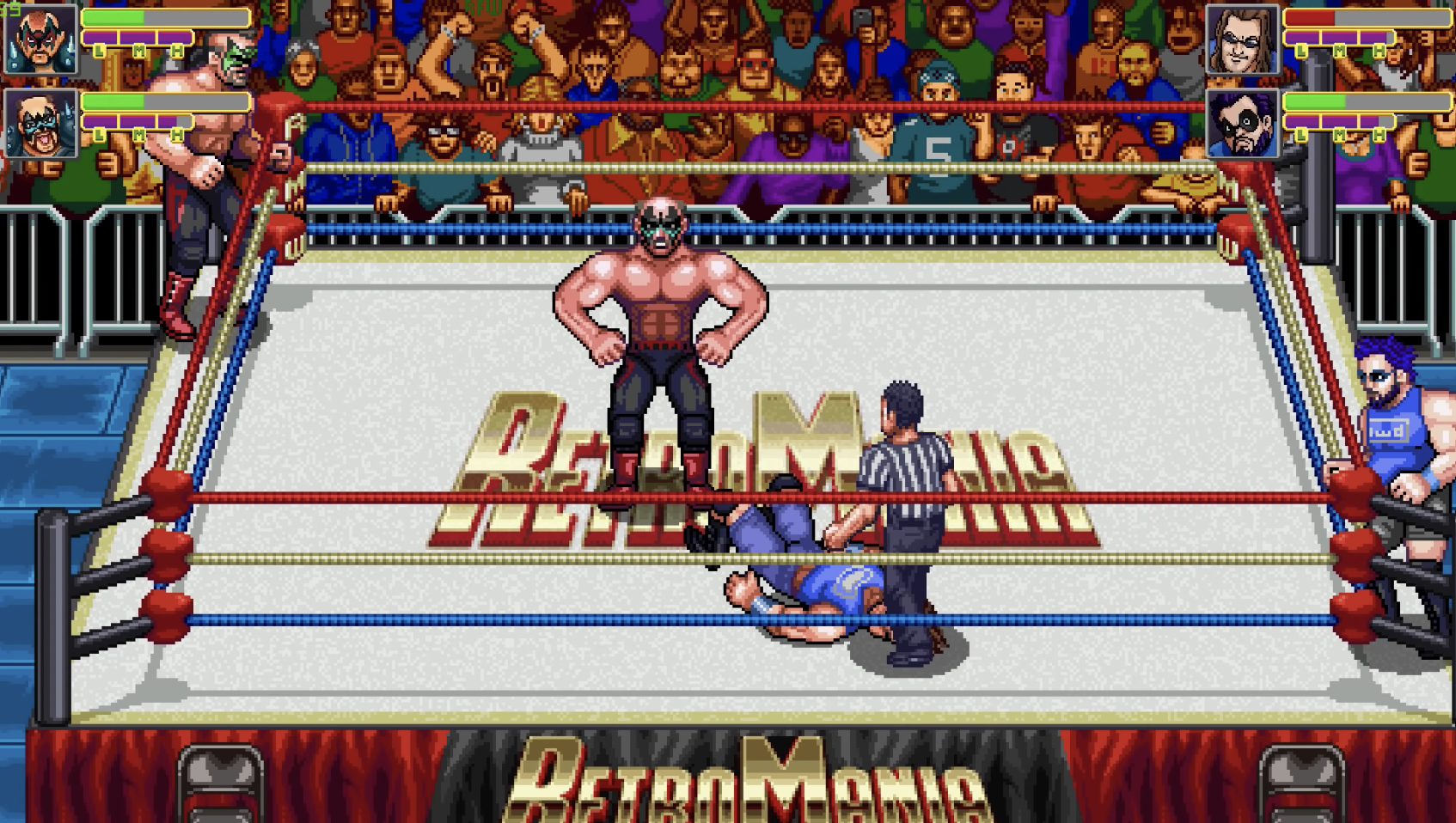 For 30 years, wrestling fans have waited for a sequel to WWF Wrestlefest. A timeless arcade hit, it was released in 1991 and instantly became a classic. But how does a WWF Wrestlefest sequel hold up throughout the history of time? Well, you’re about to find out in this RetroMania Wrestling review.

(Before we go any further, let me just say this is based on the Steam version. Console versions of RetroMania Wrestling ran into a minor delay but should be released in the coming weeks. 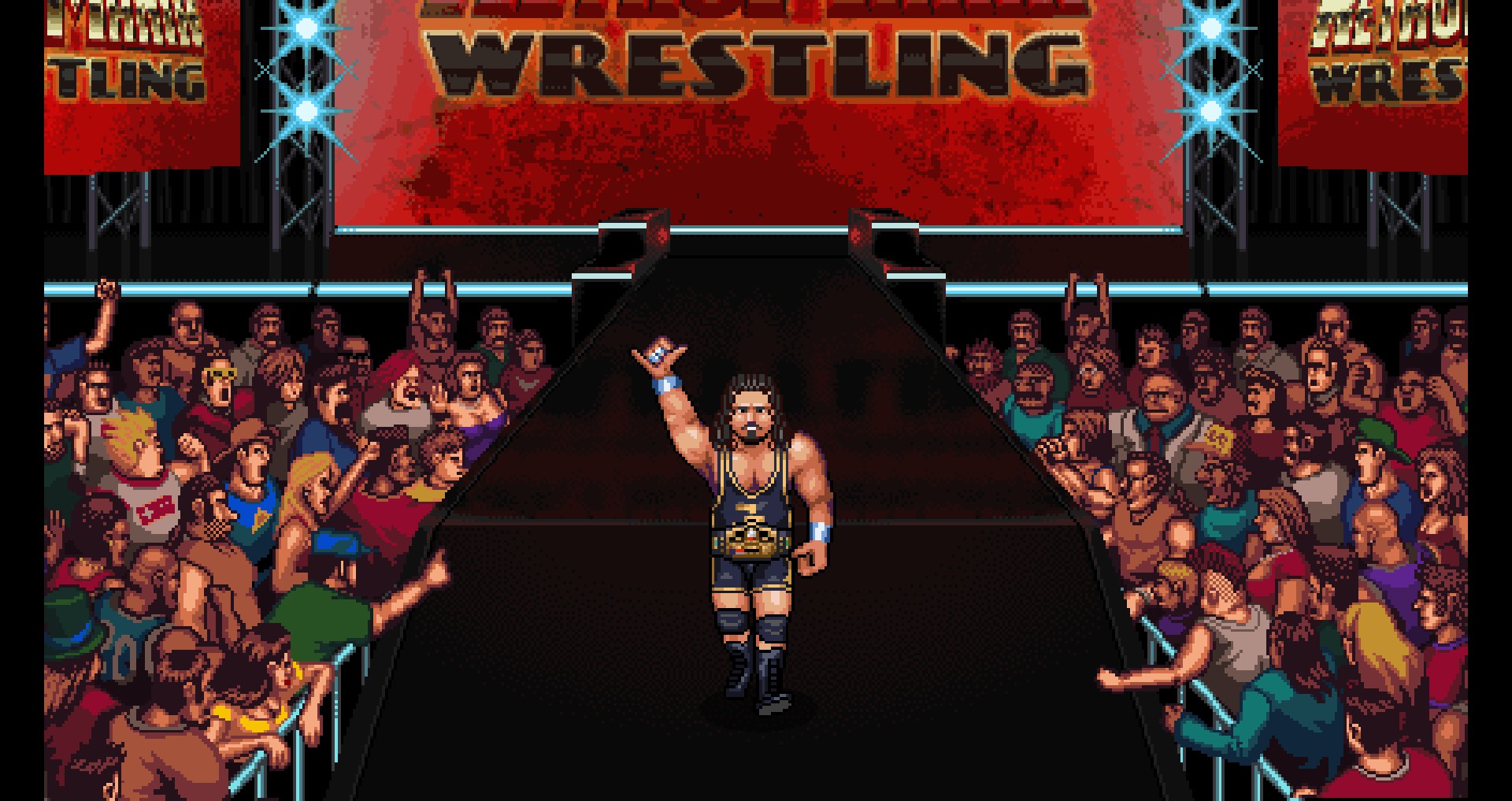 The first thing fans may notice when booting up RetroMania is how much it looks and feels like the game that started it all. Everything has that old-school wrestling vibe to it. From the music to the menus to the 16-bit wrestlers, the developers really do a good job of bringing the past to the present.

Those same good vibes also show out with the delightful roster and venues within the game. To some, RetroMania‘s roster will look familiar, but very different to others. The unique roster, which focuses around many current NWA superstars, features some popular names from some of the biggest wrestling promotions all over the globe, including Nick Aldis, Zack Sabre Jr., Jeff Cobb, Colt Cabana, Matt Cardona, the bWo, Hawk, Animal, and many more!

The main story revolves around a character named Johnny Retro, which looks eerily similar to WWE’s John Morrison. There are plenty of characters to choose from, though I’ve done most of my dirty work with Jeff Cobb, Warhorse, and Tommy Dreamer.

Here’s a look at the current roster. 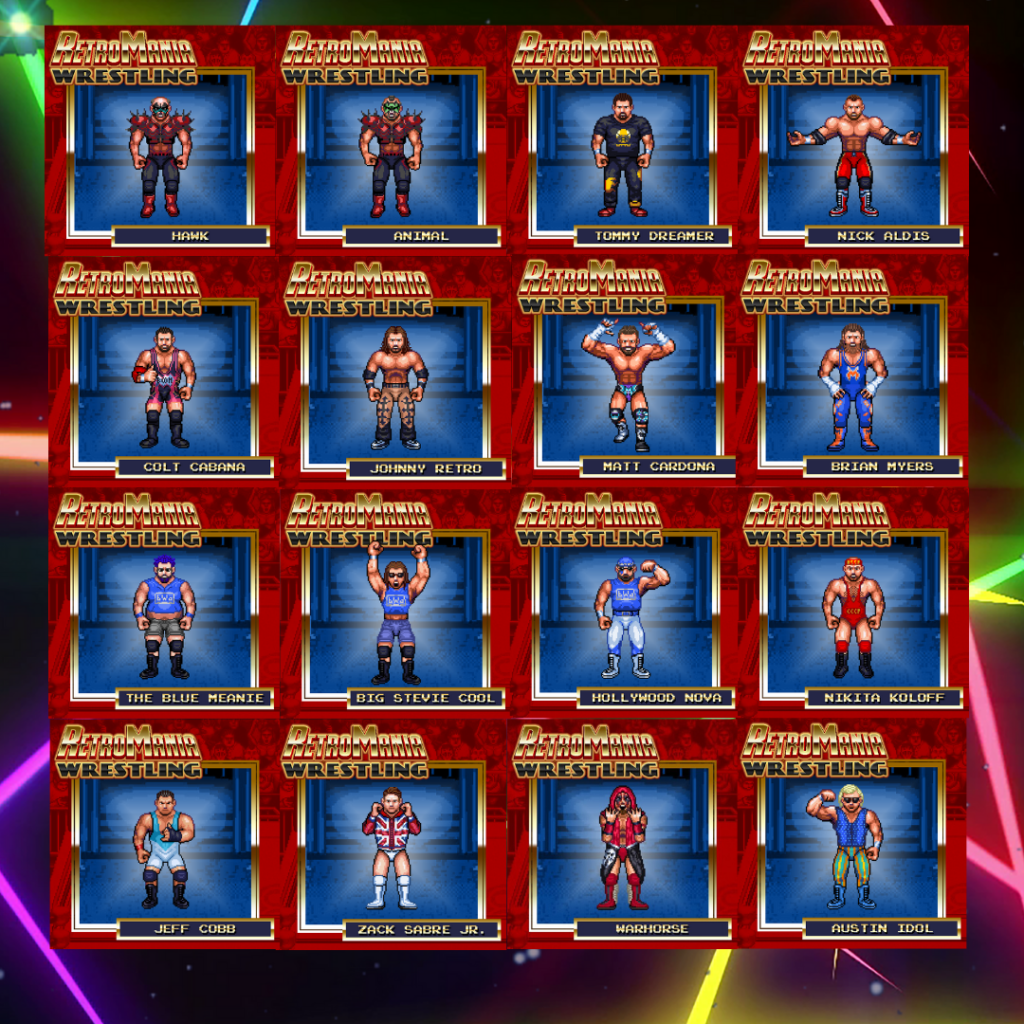 In addition to the array of superstars at your disposal, part of what makes wrestling so special includes the arenas and venues. Many of these classic rings have found their way into the game, including an NWA 70th anniversary arena, Bash at the Beach (not exactly), NWA Powerrr, the original house of hardcore, classic RetroMania, Japan, and more. There are also a few character-specific rings like Austin Idol’s wrestling academy, Stevie Richard’s gym, Warhorse’s Hell, and even the Pro Wrestling Tee’s warehouse.

Best of all, they promise to have plenty of add-ons and DLC along the way.

(RetroMania already released its first round of DLC, which include Impact’s Chris Bey for free. The other two superstars, “Cowboy” James Storm and Mr. Hughes, are available for a small fee.) 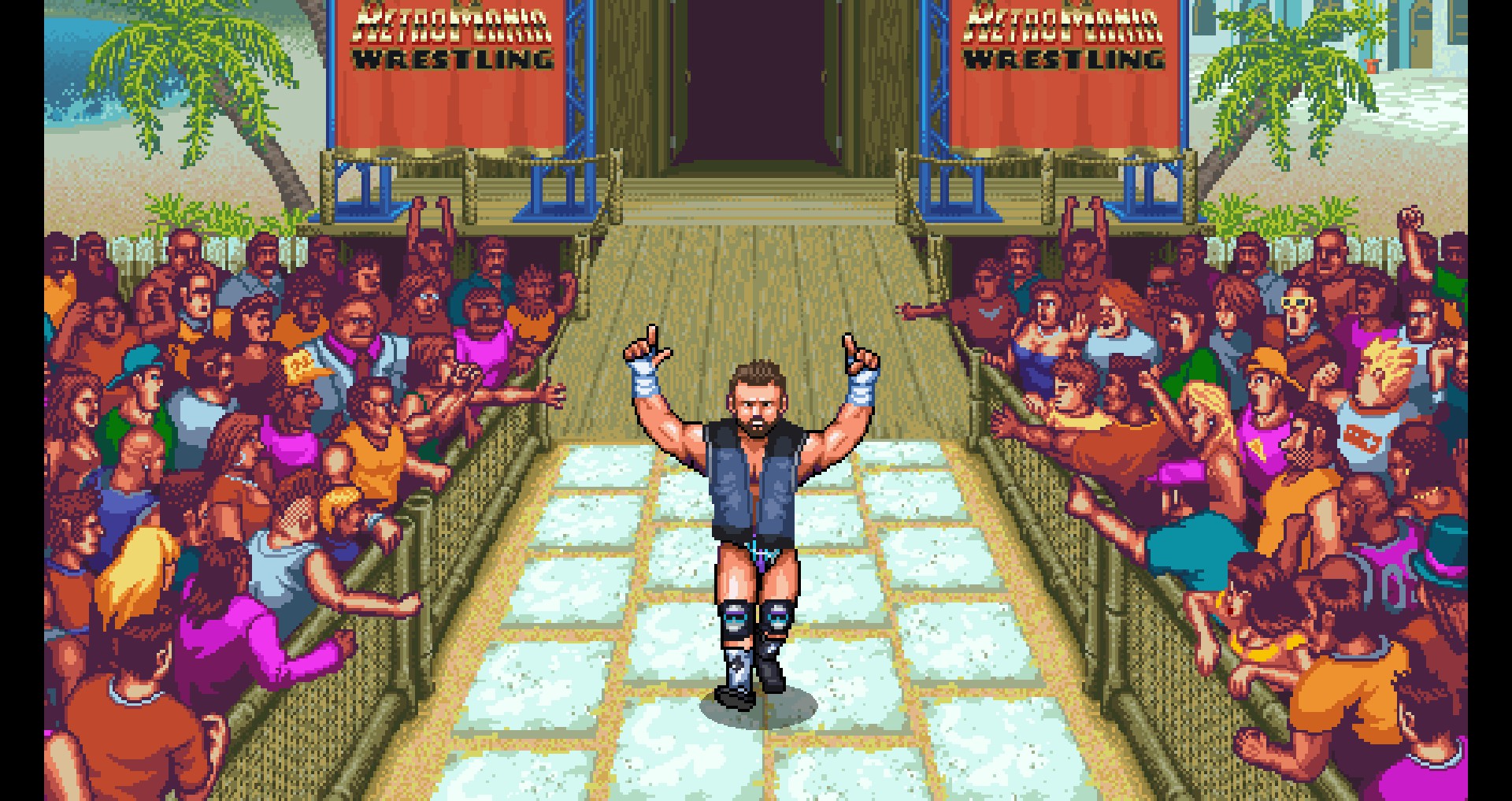 Although the game advertises 50 different match variations, the basic match types include single, triple threat, fatal four, battle royal, elimination tag, and steel cage matches. The most fun out of these is obviously the steel cage match, but playing through a battle royal and coming out victorious is one of the most rewarding accomplishments in any wrestling video game. But where RetroMania truly shines is with its two single-player modes: Story and 10-Pounds of Gold. 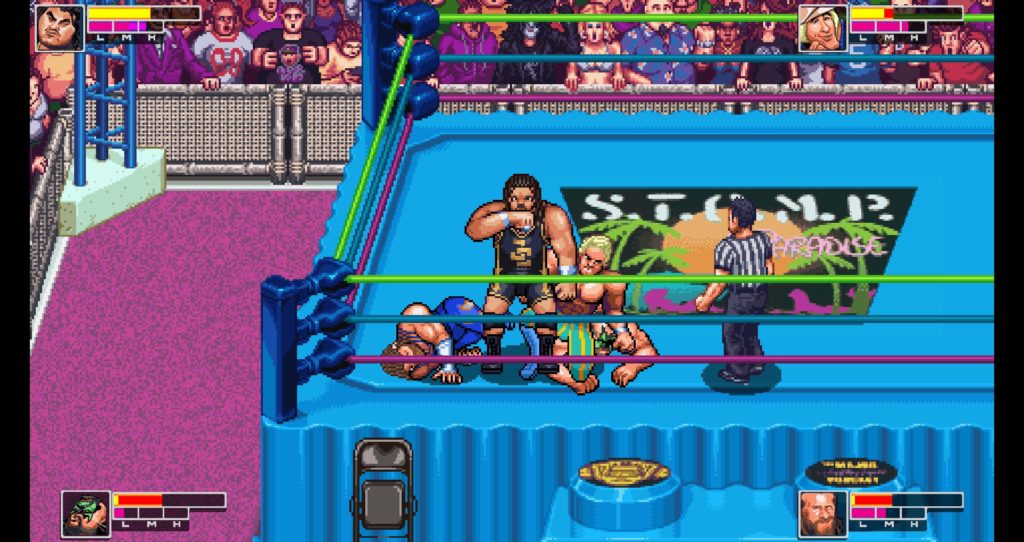 This mode is your traditional ladder (think Mortal Kombat), where you will have to climb each rung on your way to the top of the mountain, or in this case, a shot at  Nick Aldis and the NWA Championship. I picked to playthrough with Jeff Cobb, a current New Japan wrestler, and I must say, I really enjoyed this journey. It was a good way to introduce casual gamers to each wrestler. However, achieving gold was not an easy task in any sense.

After selecting Cobb, I started my ascension by slowly defeating superstars like Colt Cabana and Matt Cardona. As you would expect, it seemed to get more difficult as I got closer to my title match. I definitely took some L’s, and I’m not scared to admit it.

Eventually, I did defeat Nick Aldis to become NWA World Champion. But then the fun really started. It was my turn to defend my title, which seemed a bit more difficult than my rise to fame. I really enjoyed 10-Pounds of Gold. My only concern is that it may become stale after another one or two playthroughs — regardless of which wrestler I choose.

Nevertheless, this mode delivered, as did the primary single-player story mode. 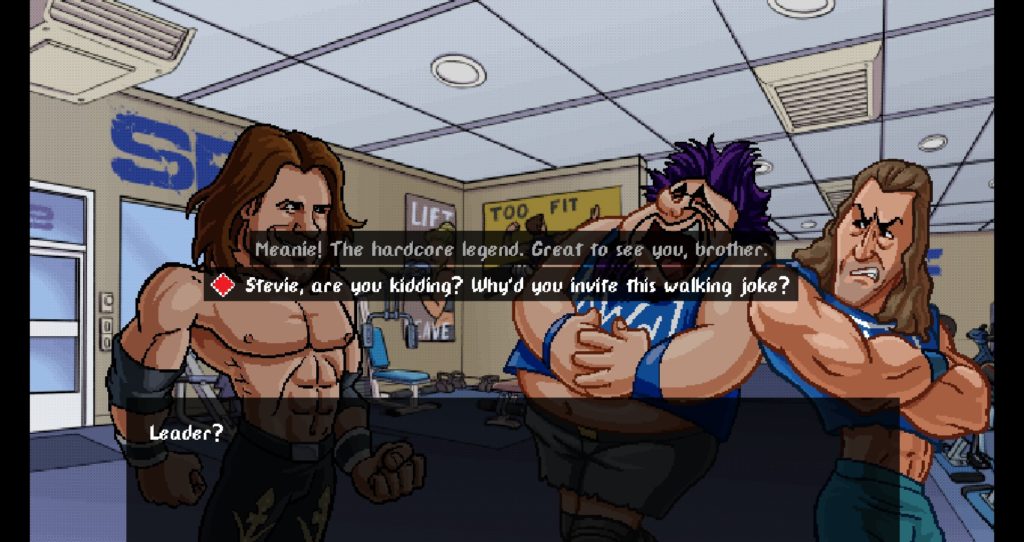 10-Pounds of Gold is nice, but the real gem of RetroMania Wrestling is its story mode. Here fans control Johnny Retro (aka the John Morrison clone), who just finished rehabbing a serious and career-threatening injury. Before he can get back on his feet, he must go through a few training exercises with Stevie Richards. These exercises, or tutorials, are truly the best way to get a feel for RetroMania. (I also really wish I knew this was buried within story mode from the beginning.)

Once Retro is back to full strength, he heads out onto the indie scene to regain his fame and glory. My favorite part, and what separates Story mode from 10-Pounds, is that you can interact with wrestlers backstage. Throughout the story, these decisions will affect your character, the responses, and how the story ultimately plays out. I don’t want to spoil too much, but players will have the opportunity to turn Retro both face and heel.

The developers have also promised there will be plenty of twists and turns along the way.

Oh, You Can Buy A RetroMania Wrestling Arcade Cabinet

I don’t own an arcade cabinet, but I thought it was awesome that this was available to purchase. 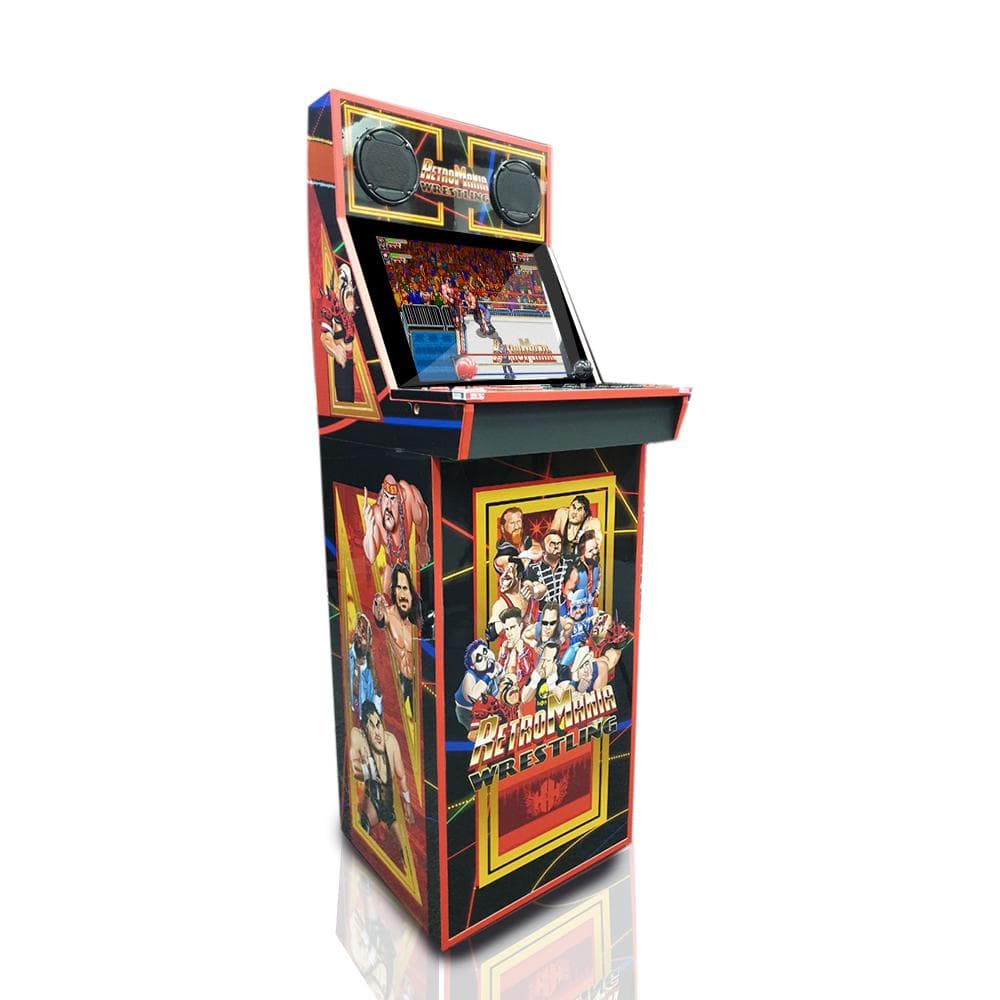 The cabinet is created by IIrcade and is expected to ship in April.

As with any video game, a lot of the enjoyment comes from how quickly you can master the controls, in addition to the difficulty of the game. Both of these things can be hard at first to handle, which also was true for WWF Wrestlefest. So, maybe that’s where a lot of the blame comes from. The grappling system, which revolves heavily around a phantom-timing system that you can only truly get down by playing the game, is an homage to the classic game of the ’90s (think Fire Pro Wrestling).

RetroMania is a grappler, so three of the four buttons on your gamepad are devoted to the three different strengths: strong (B button), weak (A button), and X (medium). These buttons are not exclusively dedicated to those controls. But again, the thing that remains most difficult is truly getting a feel for how the grapple system works. Your ability to successfully pull off reversals and gaining the advantage revolves heavily around button mashing, or so it often feels. 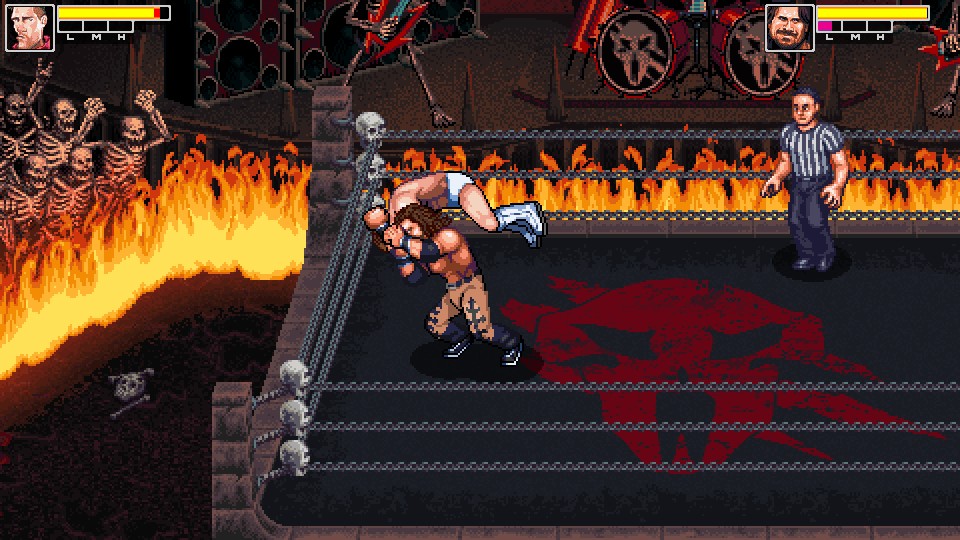 This timing-based system is heavily impacted by your wrestler’s momentum meter. If you try to perform a move without the proper momentum, the move will almost always be reversed by your opponent. This becomes frustrating at times. Another small issue I had is competing in matches with over two participants — things became a bit more chaotic with every added participant.

However, the good news in all of this is that the game has a solid tutorial buried deep within Story mode. 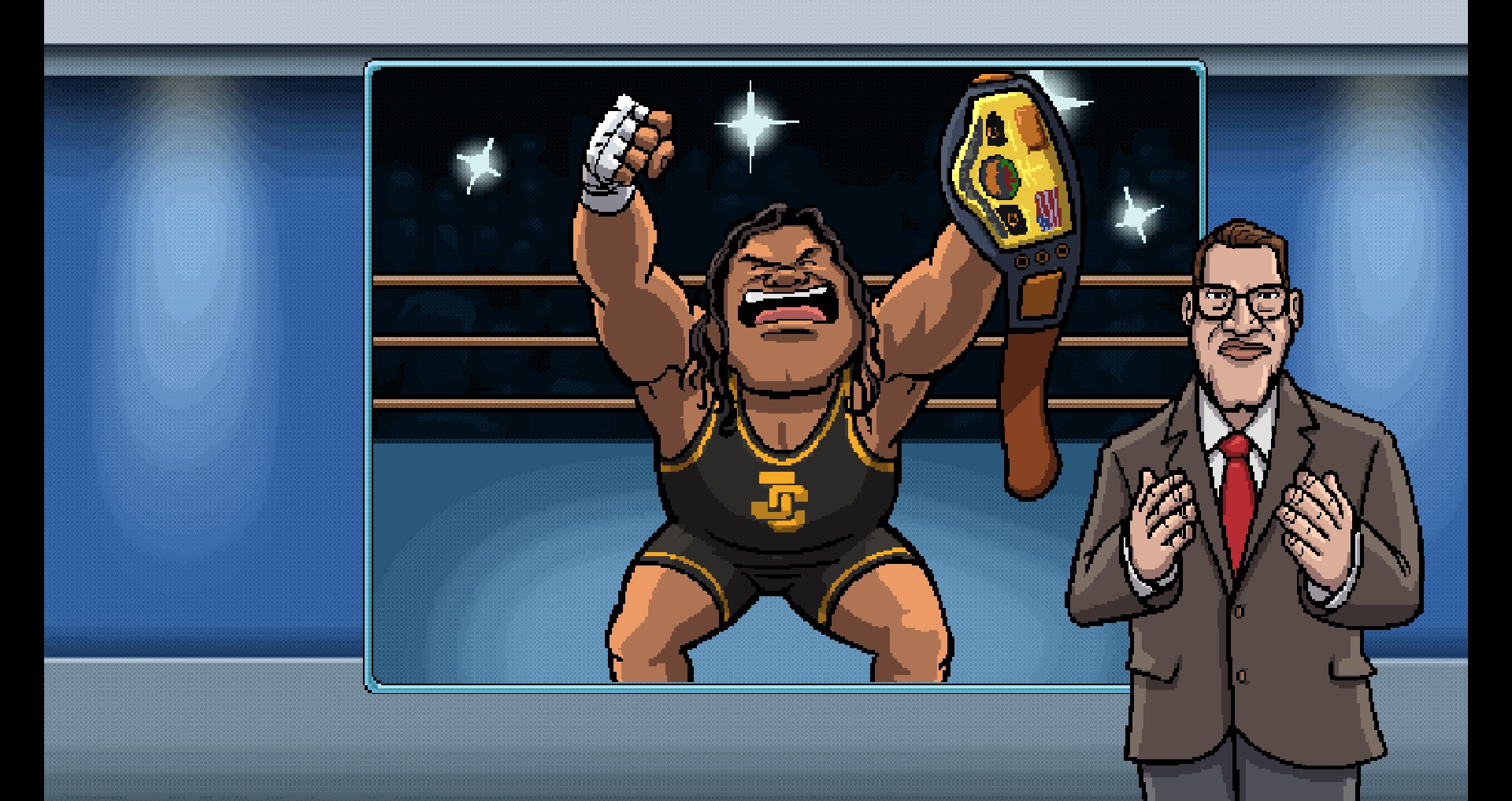 RetroMania Wrestling is a perfect tribute to the game that started it all. A game that many of us fondly remember playing at our favorite arcade, roller rink, or bowling alley. Without the WWF license, RetroMania Wrestling still shines with a roster consisting of current NWA superstars, legends, and some of the biggest names in professional wrestling. You won’t be able to pick this game up and immediately dominate. It will take time. But once you’re able to master the controls, it’s hard to put the controller down.

It may have taken over 30 years to come to fruition, but what the talented developers over at Retrosoft Studios were able to accomplish is everything I could have hoped for here. It’s not perfect, but what RetroMania Wrestling was able to accomplish after a three decade hiatus has to be celebrated. Retrosoft Studios has slapped down the foundation for a wrestling arcade video game that should stand the test of time.