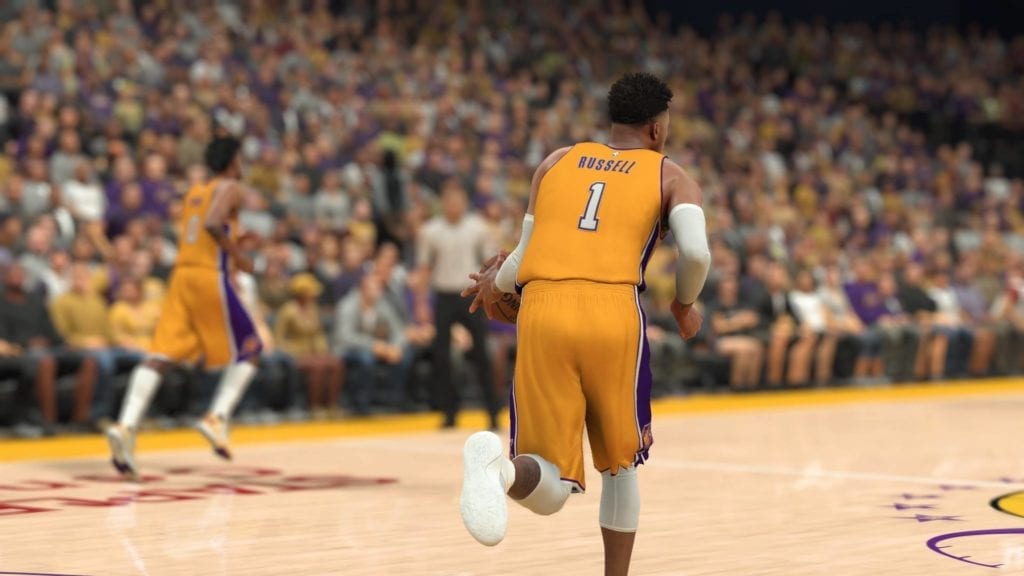 When challenged with an NBA 2K “free choice” opportunity, I immediately decided to make it personal. Writing about things I’m passionate about is the whole reason I’m in this spot, so why not take over for Jim Buss and Mitch Kupchak?

But first, here’s a little background. Kobe Bean Bryant retired following the 2015-16 season, and to that point I’d spent 80 percent of my life rooting for the purple and gold with no remorse. It was a beautiful marriage for a long time. A basketball junkie rooting for the most-hated franchise in the world with an owner who had an open checkbook and the goal of winning at all costs? Check and mate. I have to admit, Dr. Jerry Buss spoiled me. I’m used to moves that make sense being made.

In addition, I also have ties to Jahlil Okafor and still believe the basketball world will be his once he’s in a better situation. I still wake up at night seething about the moment the Lakers passed on a solid young big man to draft a player that played the exact same position of their all-rookie first-team player the year before.

To this day, I still believe the Lakers franchise would benefit from swapping Russell for Okafor. I even recorded a video at work the day of the draft warning I’d be shifting my loyalties to the Warriors if the Lakers took anyone other than Okafor. For so long, I didn’t even think they’d have a shot at Okafor, much less have him in their hands and pass.

Needless to say, I’m convinced I could do a better job than the current Lakers regime because, well, video game GMs just aren’t that smart.

The first task with any new franchise is sorting through the roster to find worth. I’ve long been a Clarkson fan so he’s untouchable; Nance Jr. is a game-changer defensively so I’ve yet to part with him during any franchise mode where I’ve controlled the Lakers’ current roster. Zubac has impressed me in every bit of film that I’ve seen, so I keep him around in hopes that a jump will happen when I least expect it. Swaggy P is a legend in my household so I try to hang onto him at all costs, but that generally doesn’t last very long. Randle has grown on me over the last few seasons with his work ethic and desire to improve (who knew Kentucky guys could actually desire greatness?) and Russell is a better player in 2K than in reality

In short, this all makes for some tricky maneuvering with these players. So this time around I decided the goal would be to at least make an attempt to keep these players in the fold, but if they fill the void for a need, it’s fair game to make a deal.

Year one was a bit up and down There were some flashes, but not much sustainable success — similar to what we’ve seen from the Lakers this year. Clarkson averaged 17.6 PPG, Randle averaged 14 points and 10 rebounds per game, and Russell’s 15.6 PPG and 8.8 assists per game rounded out a squad that finished 31-51.

The team stats were about what you would expect with this sort of record: 42% shooting, 35% 3FG, and a paltry offensive rating of 101.3. Rolling out the starting lineup of Russell, Clarkson, Ingram, Randle and Mozgov was fun when I actually hopped on the sticks, but as the season wore on, the basketball evened out.

Gaining Respect Via The Charity Of Others

I gave the core a shot, but really aimed for the fences in year two. This is where NBA 2K’s GMs getting swindled comes into play.

I was able to acquire the second and third picks in the draft via dealing Lou Williams, Luol Deng, Tarik Black and Swaggy P (you’re all fired NBA GMs). I turned those picks into Jayson Tatum and Harry Giles respectively (my Duke blue is showing). With two spots in the starting lineup locked up, I moved on to free agency. With the cap-clearing moves out of the way via the earlier trades (thanks again foolish GMs), I was able to sign Mason Plumlee…Oh, and one Kevin Wayne Durant. I guess things didn’t work out with the Warriors.

So that meant with Russell returning and every other starter pushed to the bench, the magic began. I mean how could it not, I was just gifted everything imaginable — almost like the NBA wanted the Lakers back on top.

The team numbers shifted to 65-17, 51% shooting, 39% 3FG with an offensive rating that leapt to 113.4. KD logged 27.1 points, 7.6 rebounds and 6.4 assists on the way to being crowned MVP. Harry Giles took home rookie of the year as he held down the paint from day one averaging 21.9 points, 11.8 rebounds and 1.7 blocks. Tatum took home second-team all-rookie honors by holding down the other wing spot while averaging 14.6 points and 6.5 rebounds while just missing a 50/40/90 season (54%|44%|89%). Even Plumlee took it to another level averaging 13.5, 9.2 boards and 4.2 assists — all while being in the MIP race all season and posting his first career triple double. Smoove Walker, aka me, took home Exec of the Year. And my first big hire, Steve Kerr, won Coach of the Year. Oh yeah, did I not mention I hired Steve Kerr? The Warriors really melted down.

The previous core of Russell, Clarkson, Ingram, Nance and Zubac tied in with the new additions and won a championship in 2018 as the Lakers swept past Utah in the first round, knocked out the Blazers 4-1, saw Minnesota steal two games before going down in Game 6 of the conference finals. Then I happily handed LeBron a 4-2 smacking after he’d knocked out defending NBA Finals MVP Jimmy Butler and the Bulls in the Eastern Conference Finals.

I flipped Julius Randle to Indiana for a first rounder the next season, along with Glenn Robinson III — Randle couldn’t handle dropping from first to third in the PF depth chart and was ruining my chemistry. About 10 games into the 2018-19 season, Russell was also traded for Jahlil Okafor because you knew that was going to happen at some point.

I had signed Jrue Holiday during the offseason with this in mind, and he held down the fort to the tune of 9.9 points and 8.6 assists at point guard while transitioning Clarkson to the two-spot. KD’s points per game dropped to 24.3 but his stats remained the same everywhere else — still the dip in points cost him MVP. Giles became an all-star for the first time, adding 23.3 points and 12.7 boards per game. Okafor averaged 18.3 points and 5.9 boards for the season, but in 72 starts post trade, averaged 24.6 and 8.7. Tatum remained steady while actually completing the 50/40/90 this time around: 51%|46%|92%.

If the 2018 team set he bar, the 2019 crashed the party running to a 70-12 record and only losing three times in the postseason, two of which came in the Finals to the same Cavaliers teams from the prior season. Averaging 117.6 points per game and regularly breaking 150, the franchise seems to have completely turned it around due to the charity of the rest of the league.

Currently, the starting lineup includes Clarkson, Tatum, Durant, Giles and Okafor as I enter the 2019-20 season.

There’s no question this was in no way realistic, but the point is I had fun doing it. Does taking advantage of GMs like I did ruin it for you? Or when you do a turnaround project, do you care how it happens? Do you want it to take many years, or do you want it to happen in a hurry?