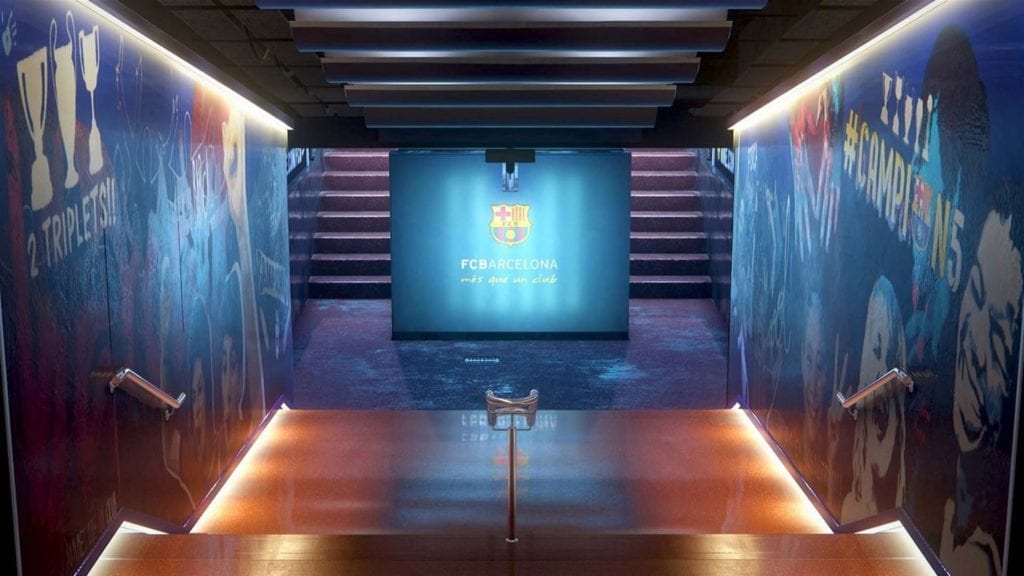 It’s hard to believe the European soccer season is almost over. With only a handful of Cup matches left, the doldrums of summer are nearly upon us. Thankfully, the team over at Konami has released a teaser trailer as well as an accompanying press release.

Regardless of how you feel about teasers, any early news at this stage of the development cycle is better than nothing. Even this most recent 45 seconds of cut-ups shown at close angles is enough to entice the most loyal of PES fans while giving those who are new to the series a glimmer into the niche fan base that is PES.

Let’s jump right into the video:

The PES partnership with FC Barcelona looks to have taken the next step with the Nou Camp tunnel looking amazingly detailed. Piggybacking on this are the noticeable visual upgrades with everything from the crowd to the body scans looking remarkably better than last year’s version. Tattoos, ball scuffs and immaculate face scans all pop leading to a photo-realistic interpretation of the beautiful game. Animations look like they’ve been refined with Suarez dropping his head after scoring a header and Neymar’s patented free kick run-up.

Even mouth movement looks to be more natural and in-tune with the match events. Perhaps PES’ collision engine, M.A.S.S., has seen an upgrade evidenced by a new fall animation displayed by Neymar. Lastly, player models and shorts, yes shorts, have finally been addressed with the latter finally moving away from the block-y PS2-era shorts. Despite its quick cuts, the PES 2018 teaser trailer already shows noticeable improvements over PES 2017. Let’s hope Konami keeps us engaged with these videos all summer as we prepare for another fall release of PES.

And if the teaser trailer wasn’t enough, Konami’s PR department dropped a concise press release to keep up our interest.

• The world renowned gameplay quality has been finely tuned and refined to recreate the authenticity of the beautiful game, including a more realistic game speed.
• Strategic Dribbling gives the user significantly more control in possession, with the addition of contextual shielding to protect the ball, as well as simple stick controls triggering realistic, subtle movements to wrong foot defenders.
• Real Touch+ adds a new dimension to ball control, with full body touch allowing various parts of the body to control the ball based on the unpredictability of the ball movement.
• Set pieces have been reworked with a new Free Kick and Penalty Kick system, alongside the option to choose the new one player kick off.

Right from the start, the first thing that grabbed my attention was Konami’s mention of “a more realistic game speed.” PES 2017 suffered in this area — whether it be down to the rigid tactics or wonky programming that saw players sprint back to their positions comically, the pace in 2017 was a little too hectic — even on the slowest speed settings. Capturing an accurate match pace is difficult as it often changes frequently throughout a match, but realism nuts like we have here on Operations Sports have to take this as a sign that our feedback is being considered.

Strategic dribbling sounds intriguing even if “contextual shielding” more than likely means it will occur at the computer’s behest. Simple stick controls are always a must, and could “wrong foot defenders” be a hint at foot planting? One can only hope so. Real Touch+ could be a potential game changer if it’s implemented correctly and requires players to think about how they want to control the ball. Hopefully the commands from corner kicks will have, at the bare minimum, carried over to free kicks as the movement off the ball is almost always stagnant, robbing us of the excitement and danger of free kicks.

• [i]Realistic visuals recreate the authenticity of football, all the way down to the finer details thanks to Real Capture.
• The benefits include true-to-life stadium lighting for day and night matches, pitch turfs and player tunnels that were recreated from more than 20,000 intricate elements of genuine data that was collected at the Camp Nou and Signal Iduna Park.
• Players have been motion captured in equally realistic environments, allowing for a complete rework of the animation system, starting with core movement such as walking, turning and body posture.
• Additionally, player models have been completely changed, with special attention paid to kit fitting and short size.
• Players photo scanned from partner teams will receive full body tattoos.

Touched upon earlier, the visuals look to be enhanced across the board. Everything from lighting, notoriously poor in PES night matches, to animations have been enhanced giving a more realistic experience. Just the mention of something as simple as “walking” can not only help to create a better match pace but also create better visual integrity as Konami seems to have really focused on the core movement mechanics. One area I am generally intrigued by is the mention of “20,000 intricate elements of genuine data…” Hopefully this is a testament to the little things that often create the immersion needed to pull you into the varying emotions of a match.

“A new mode dedicated to 2v2 and 3v3 co-op play, with support for local guests. Play together with friends, take your team to the top or simply have some fun via one-off casual matches.”

Presentation Overhaul
“New UI for all menus and real player images for gamey screen and myClub, as well as new in-game presentation giving the game a new broadcast feel.”

The remainder of the press release brings back some favorites from year’s past such as “Random Selection Mode” and “co-op” matches. Sprinkled in are a few nuggets for Master League with PES 2018 copying FIFA 17‘s inclusion of pre-season tournaments. An “improved transfer system” was desperately needed as it was way too easy to build a quality side through the summer/winter windows. Hopefully we’re not limited to conducting only five negotiations at a time like we were in last year’s iteration.

New “presentation elements” both within Master League and in regards to the UI could go a long way towards mirroring what we see on TV. Lastly, I’d be remiss if I didn’t mention the “significant PC improvements.” Largely forgotten in the past, the PC modding community has generally taken a backseat when it comes to literally having the same game features as console gamers. Relying on their excellent modding skills, parity across all current-gen platforms could make PES 2018 on the PC the go-to choice for a lot of gamers.

It’s hard to get too excited about “back of the box” marketing catchphrases and a finely mashed up video, but there’s something already different about this year’s approach by Konami. The team seems to have rediscovered their identity and established a vision for where they want PES to go. Using PES 2017 as the foundation, all early signs seem to indicate we’re in store for another fine offering. With E3 right around the corner, more information and hopefully some early build gameplay footage will start to appear, and as always, the folks at OS will keep you abreast of all things PES.