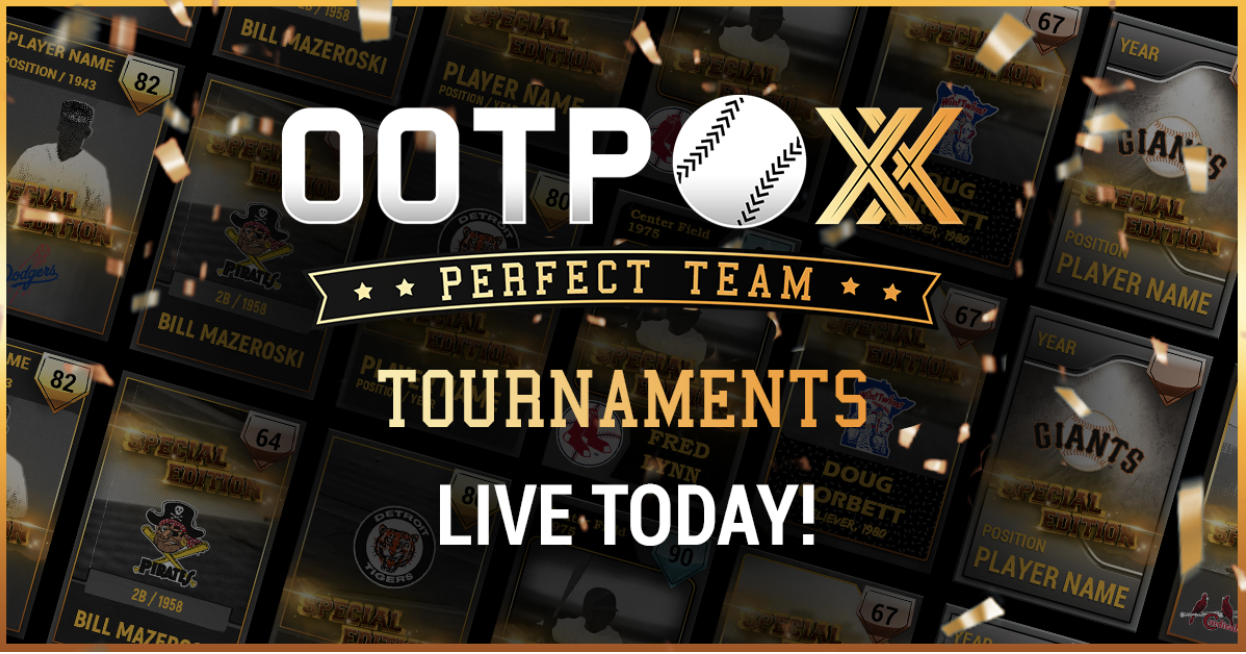 The newest way to experience Out of the Park Baseball 20 is officially live! The most recent update to the game introduces Perfect Team Tournaments, an all-new way for players to compete against each other in a fun and easy way – earning all sorts of rewards, including Perfect Points, card packs, and special edition cards found nowhere else in the game.

Culminating over a year’s worth of design, development, and testing, Perfect Team Tournaments dramatically expand competitive opportunities for OOTP players of all types. Tournaments allow players to enter up to three completely different versions of their entire Perfect Team card collection at one time in competitions against other of varying length, time, and type. Plus, once that competition is complete, a slot opens up instantly. There will almost always be something to do!

All of these can be combined, mixed, and matched as well, so the possibilities are endless. They are run at various times, including ‘quick’ (which launch as soon as the bracket fills up), ‘daily’ (which run every day at a certain time, which varies), ‘weekly’, and more. Plus, members of the OOTP Development team will be setting up special tournaments – including an Operation Sports Invitational that will be unveiled in the upcoming weeks!

The strategies to put together all kinds of different Perfect Team rosters are numerous. Out of the Park Baseball 20 makes it easy to mix, match, and save various roster types so you can quickly compete in every type. Now, there’s no such thing as a ‘throwaway’ card – depending on the Tournament, that player you’ve had on the bench all season may now hold the key to a Tournament championship!

The popular traditional Perfect Team mode, in which players assemble 25-man rosters to battle other players in complete 162-game season ladder leagues that take place over the course of a single week, remains intact of course. With the addition of Tournaments, players now have up to four complete versions of their Perfect Team that can compete at any given moment.

As an exclusive to Operation Sports, Out of the Park Developments will be awarding five lucky readers with 10,000 Perfect Points! All you have to do to qualify is to comment below with your Perfect Team squad’s name. The OOTP dev team will then choose five lucky winners from the virtual hat. So get those comments in down below!

Public Beta For Perfect Team Tournaments Available For Out of the Park Baseball 20
OOTP’s This Week In Perfect Team: Community-Requested Perfect Team Cards!