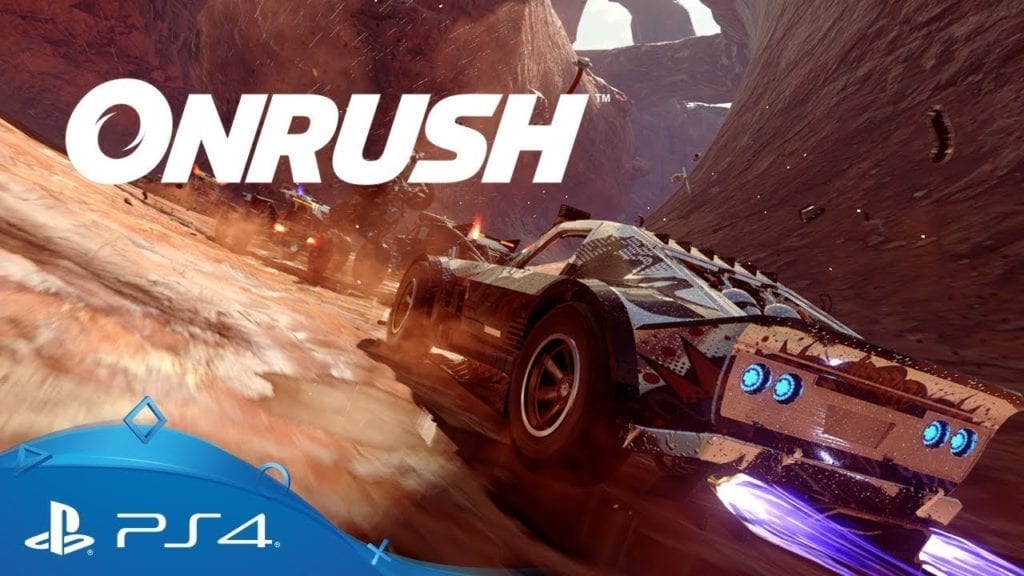 If one has fond memories of two former Sony exclusives, Motorstorm and Driveclub, then the news that the former development team(s) of each had been brought in under the Codemasters umbrella was very exciting. Once the announcement of arcade racer ONRUSH hit the wire, the waiting game began, and for many the results couldn’t come quick enough. What makes this title a bit more unique, compared to the other two previous titles from those teams, is the fact that it’s a team-based arcade racer, and while your individual performance matters, it ultimately comes down to how the team did as a whole.

It’s also true that many online racers balk at the word arcade, but if done right (as evidenced by the Motorstorm series) a title like this can still provide a lot of depth, fun and replayability. Does Onrush provide enough of these characteristics to capture the cult-like following that either Motorstorm or Driveclub carried?

Creating a control system for an arcade racer is a bit more difficult than many would imagine, but thankfully the Onrush controls feel spot on. With eight different vehicle classifications ranging from heavily-modded motorcycles to Mad Max(ish) looking rally trucks and buggies, the control schemes feel extremely well done here. There is legitimate weight when controlling the larger vehicles, and the motorcycles feel sleek and controllable. While the range of each vehicle isn’t drastically different than the others, there is a difference, and a big enough one that will lead to people deciding which type of vehicle they like controlling the most. In the end, the developers have hit the sweet spot in regards to overall feel and control of each vehicle, and that’s good news for everyone.

With the inclusion of 12 different multi-route tracks, it had to be a fun and exciting challenge for the developers to make each one look and feel different. Not the easiest of tasks for sure, but thankfully it was a challenge that was embraced and surpassed. Whether you crave rough woodland terrain, snow-capped mountainous regions, or a sun-scorched desert setting, each of the 12 maps is unique, highly detailed, and runs extremely fluid with zero slow down. Every single map is filled with detailed terrain, power-ups to help “motivate” your vehicle, and destruction and mayhem that wait for your arrival around almost every turn and twist. While that may sound like a “back of the box” description, it’s true in this case. 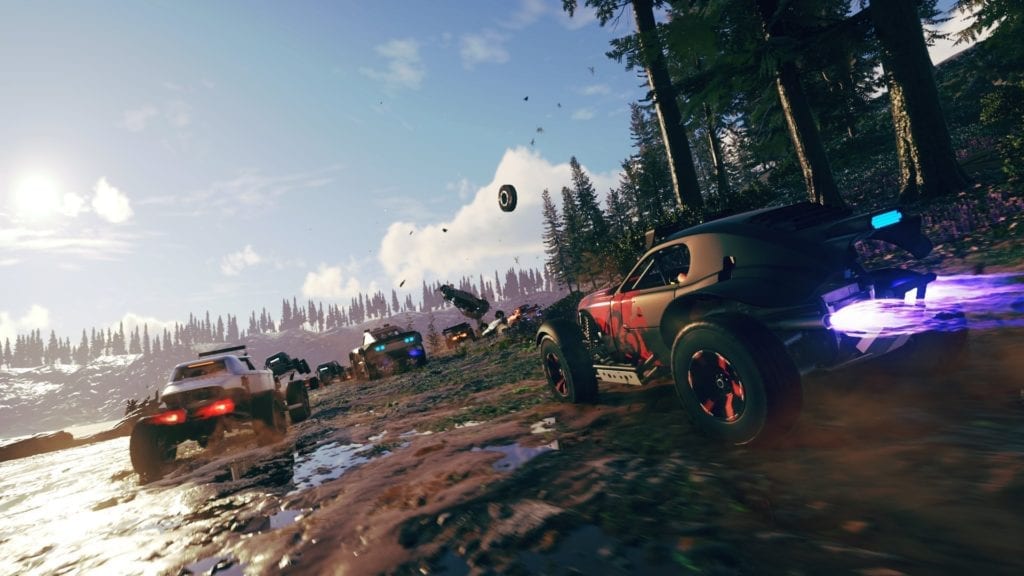 On top of the highly detailed maps are the vehicles, which in this case take no backseat to the maps in any way. Although not your standard type vehicle, each one is unique and carries its own set of identifying attributes. Whether it’s a sense of speed or height, the level of damage incurred during a crash sequence, or being surrounded by teammates and opponents, the amount of detail in all aspects is impressive. And the fact that I experienced no slow down, is even more impressive.

My initial fear was that all of the modes that Onrush provides the user would feel the same, and just labeled with a different title. While that is a bit true to a degree with the newest Codemasters offering, there are enough subtle differences to make each mode feel like a unique offering. Some modes will have you looking to accumulate team-based points, while others will have you trying to secure power-ups, race through time-lengthening gates, or fighting for zone supremacy. Regardless of what mode you play, the racing takes center stage, but the secondary requirements are just as important. There are just enough offerings with subtle differences that give each race its own unique flair to stand on its own.

I was hesitant to list the in-race power-up system as something that I didn’t like because I like the idea and how it’s implemented. The biggest flaw I had with the system overall is that very few of the actual power-ups made me feel like my vehicle was now a bigger threat to my on-track opponents. Now I am not suggesting that every single power-up or race modifier needed to drop the Hammer of Thor in an apocalyptic fashion, but a bit more of an advantage-laden boost would have been more rewarding in this case. Maybe this is something the developers can address in a patch, or maybe it’s a case of “it is what it is,” but for me I would have liked to witness a bit more destruction being caused by acquiring the in-race modifiers. 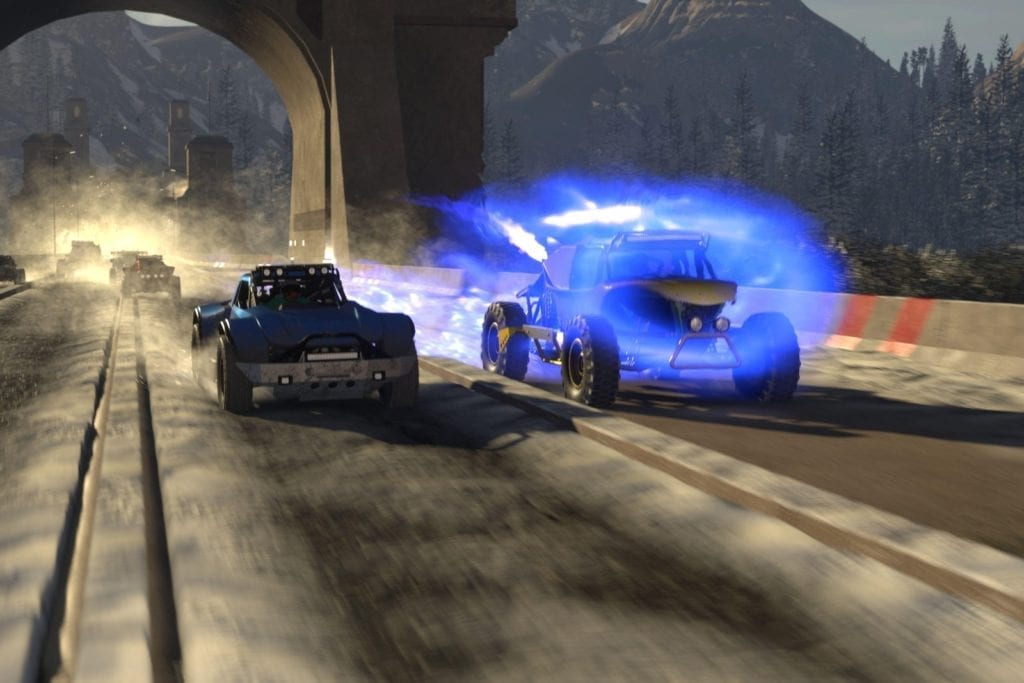 This was another tricky category for me, as I feel like there is a lot of things to do here for an arcade racer, but my fear is how long that will last. I mentioned that each race had differentiating factors that made them unique, but I am not sure that is enough to warrant any long-term replayability. The biggest compliment I can give Onrush is the fact that I constantly was saying “okay, just one more race” in my head. Now the depth and longevity of this title may be prolonged if you have a solid group of people to play with, but if you’re playing by yourself in an anonymous online community, it may feel a bit stale sooner rather than later.

While Onrush provides a solid amount of vehicle and driver customization, other than color schemes everything else is initially locked behind loot boxes. Thankfully, unlike some recent games, the loot boxes are somewhat easily acquired. Still though, it’s a grind, and with a title like this, true open-ended customization should have been a no-brainer. This game scream uniqueness, and one’s driver and vehicle should reflect that from the start. As it stands, the only difference between your vehicle and other vehicles is color schemes, and that’s a real shame because the ability to create your own personal design for your vehicle would have been a huge boost to the community. 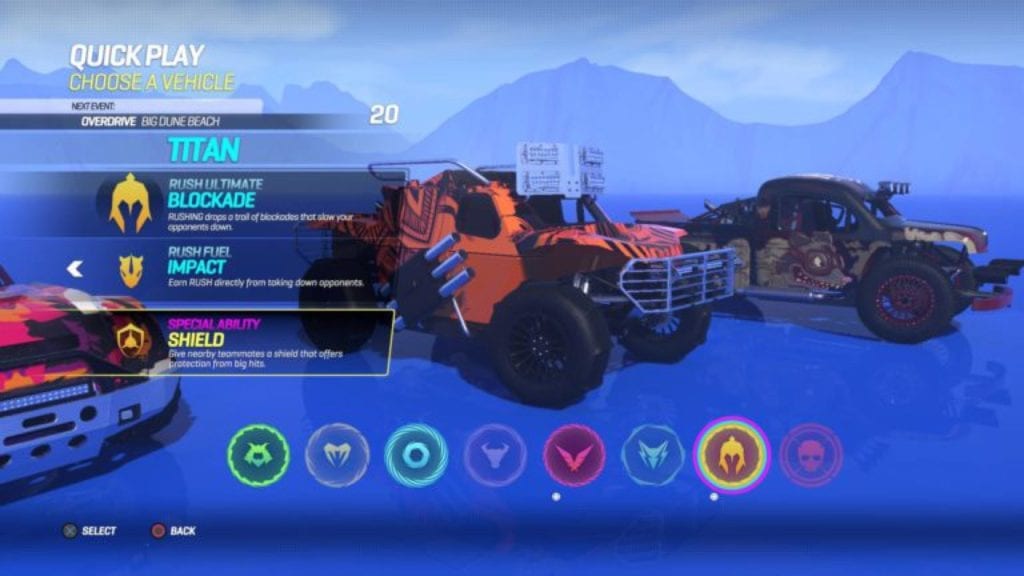 Arcade titles are always a bit tricky to gauge because they’re, well, arcade titles. They tend to stray away from the normality that we are used to, and ask us to buy into an idea that isn’t necessarily tangible. That being said, Codemasters has most definitely packaged a lot of fun into Onrush, and that cannot be overlooked. The title may not be one that will be played nightly or find itself constantly in your rotation, but on those days where you feel like some some baseless, destructive fun, Onrush will be there for you — and isn’t that kind of the point of an arcade racer? In the end, Onrush is definitely purchase-worthy as long as you have a true understanding of what you are purchasing.