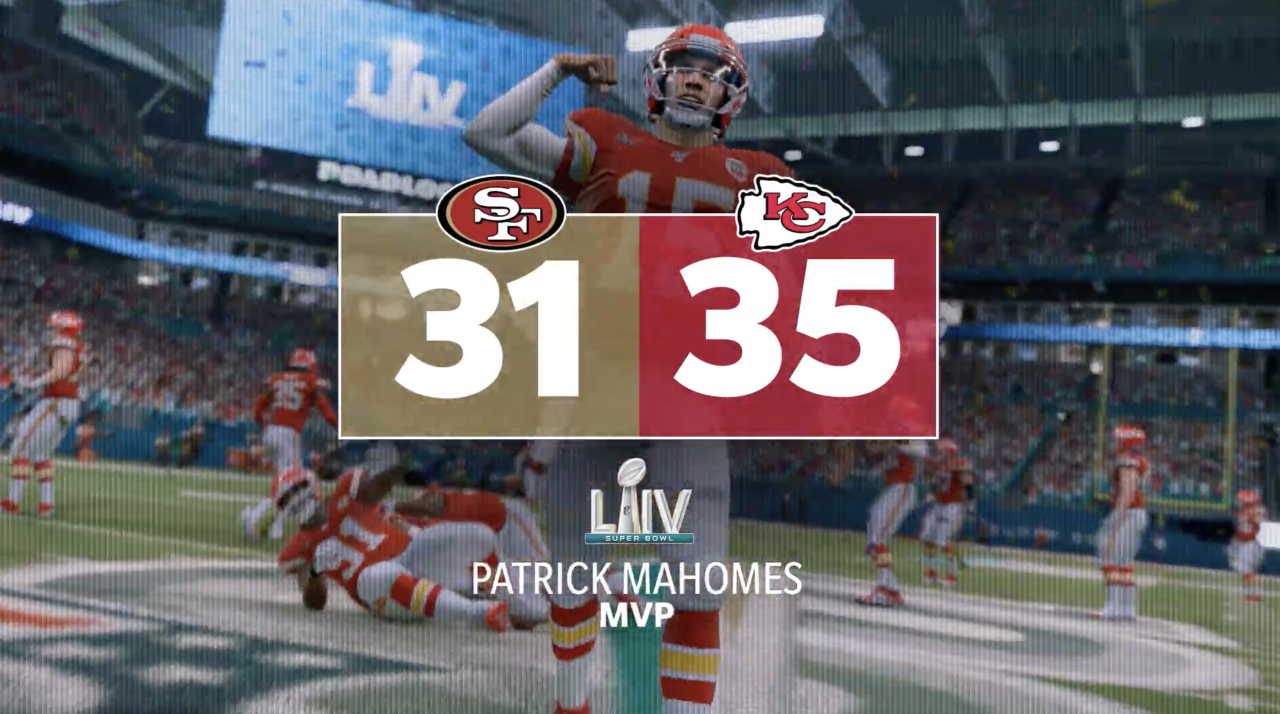 EA has revealed their official Madden NFL 20 Super Bowl LIV prediction in a whole new way, with Peyton and Eli Manning pushing the button and releasing the prediction details live from EA SPORTS BOWL in Miami. The prediction calls for a Kansas City Chiefs victory and their first Super Bowl title since 1969.

Just like the Super Bowl-winning Manning brothers, the scintillating quarterback, Patrick Mahomes, leads his team to defeat the San Francisco 49ers 35 – 31 with an incredible performance. Mahomes is projected to break the record for the most passing touchdowns in a single postseason and cementing his place as Super Bowl LIV MVP.

“It was a great experience to unveil the prediction. We’ll see on Sunday, if the Chiefs will prove Madden right and take home that Super Bowl ring,” said Eli Manning.

“I’m really looking forward to seeing the 49ers and Chiefs play it out on Sunday. Two great teams with two great quarterbacks,” said Peyton Manning. “I’ll be watching to see if Madden’s prediction is right.”

In the first quarter, the 49ers come out strong, confident and ready to win, scoring the game’s opening touchdown on a 16-yard run from new running back sensation Raheem Mostert and then Robbie Gould hammers a 41-yard field goal. The Chiefs got off to their usual slow start in the first quarter, with no points on the board.

In the second quarter, the Chiefs come alive unleashing their most powerful weapon – the unstoppable Patrick Mahomes. Mahomes throws two touchdown passes to Tyreek Hill and Damien Williams to grab the lead for the Chiefs. However, the 49ers refuse to back down and score a late second quarter touchdown – with a 26-yard pass from Jimmy Garoppolo, to end the half with a 17-14 lead.

Mahomes and the Chiefs refuse to remain silent in the second half, with Damien Williams and Travis Kelce scoring another pair of touchdowns. George Kittle nabs a touchdown for the 49ers, keeping things close in the third quarter – proving no one is safe in this game. The Chiefs lead entering the final quarter, 28-24, but Garoppolo comes in hot throwing another touchdown pass to Raheem Mostert – bringing the score to 31-28.

Not ready to accept defeat, Mahomes drives the Chiefs down the field late in the quarter, pushing the 49ers defense back. Finding Watkins open in the end-zone, Mahomes throws an 18-yard touchdown pass to take a 35-31 lead, seconds before time is up. The Kansas City Chiefs take home the title of Super Bowl LIV champions.

Taking home his first championship ring, Mahomes is named Super Bowl MVP with 392 passing yards, four touchdowns and one interception – pushing him to break the record for the most passing touchdowns in a single postseason. Even in defeat, Jimmy Garoppolo still managed to throw for 254 yards and two touchdowns. Chiefs tight end Travis Kelce led all receivers with 102 yards on 10 receptions, with one touchdown.