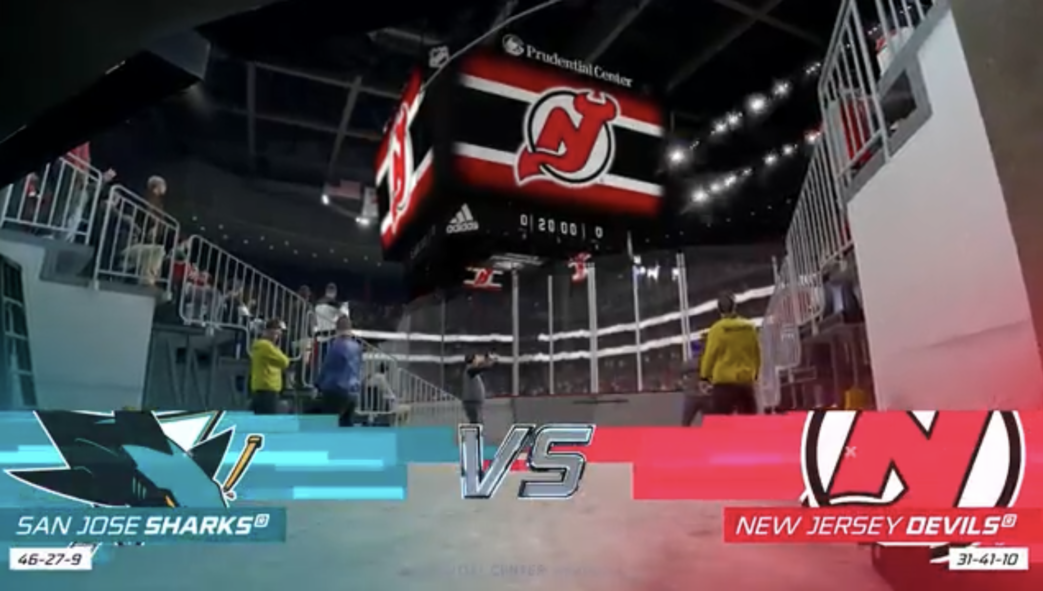 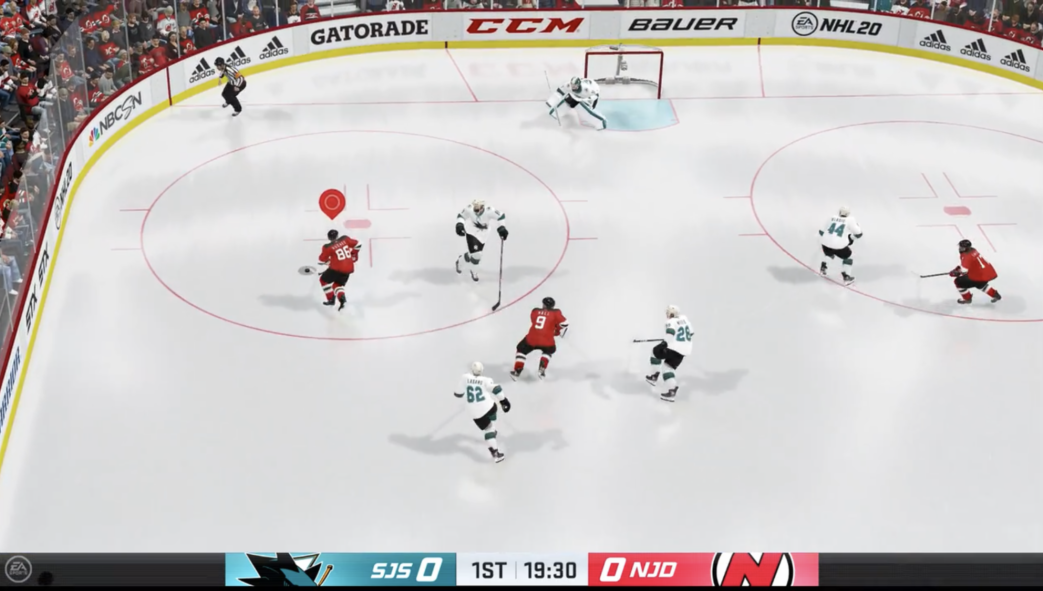 If you keep your eyes on the San Jose Sharks left winger (at the time stamp in the game from the picture above), you see him skate all the way from his left wing spot to the bottom right of the goal line. Basically it looks like players are just running around and trying to fill spots. No real structure, no real strategy.

In the first period video, there was a total of three goals scored. All of the goals were scored by the New Jersey Devils, and all of the goals were almost identical and basically the same kind of goal we’ve seen a million times over the past decade in this franchise. EA has really made a big deal about signature shooting and more control and authenticity so it would have been nice to see some new goals in our first peak of gameplay.

There are a couple things here that were disappointing with this first goal. First, the two San Jose Sharks defenders basically skate backwards into each other, come to a complete stop and let the attacking New Jersey Devil forwards skate right by them to the net. Secondly, the New Jersey forward who ends up scoring looks like he passes the puck into the net. Now, I’m not sure if it is supposed to be a new quick off-balance shot animation or not, but from all angles I’ve seen it seems like the goal was scored on a slow-moving pass.

With the second goal, it’s another disappointing example of CPU AI. The play initially starts on the outside with the Devils forward centering the puck to the front of the net for a one-timer/redirect goal. This goal is frustrating because as you can see above the San Jose Sharks defender is actually in pretty good position. However, he is just inexplicably standing there with his stick off of the ice and not boxing out/tying up the New Jersey Devils forward. Also, this is yet another “one-timer goal” that we have become accustomed to with the NHL series.

This final goal is virtually identical to the first goal that was scored. Again, the two San Jose Sharks defenders basically skate backwards into each other, come to a complete stop and let the attacking New Jersey Devil forwards skate right by them to the net resulting in a two on zero. The play this time finishes off with a cross-ice pass to the backdoor for an easy tap-in goal. A goal that we’ve seen over and over for the last bunch of years. No signature shots. No new scoring setups. Sigh.

I do like the new presentation and overlays. Although it won’t necessarily validate the $60 purchase, it does add a fresh feel to the game and series. New commentator James Cybulski does a good job with the commentary, and it is much more in tune with the gameplay than previous versions with Mike “Doc” Emrick.

I do want to see more before I make my final decision on purchasing NHL 20, but it is very head scratching that EA released video when there is so much wrong with it, especially when some of things wrong in the video contradict the things EA has been touting as new features (things like improved goalie threat analysis). Regardless, the open beta has begun so you can dive in as well if you want to check things out.