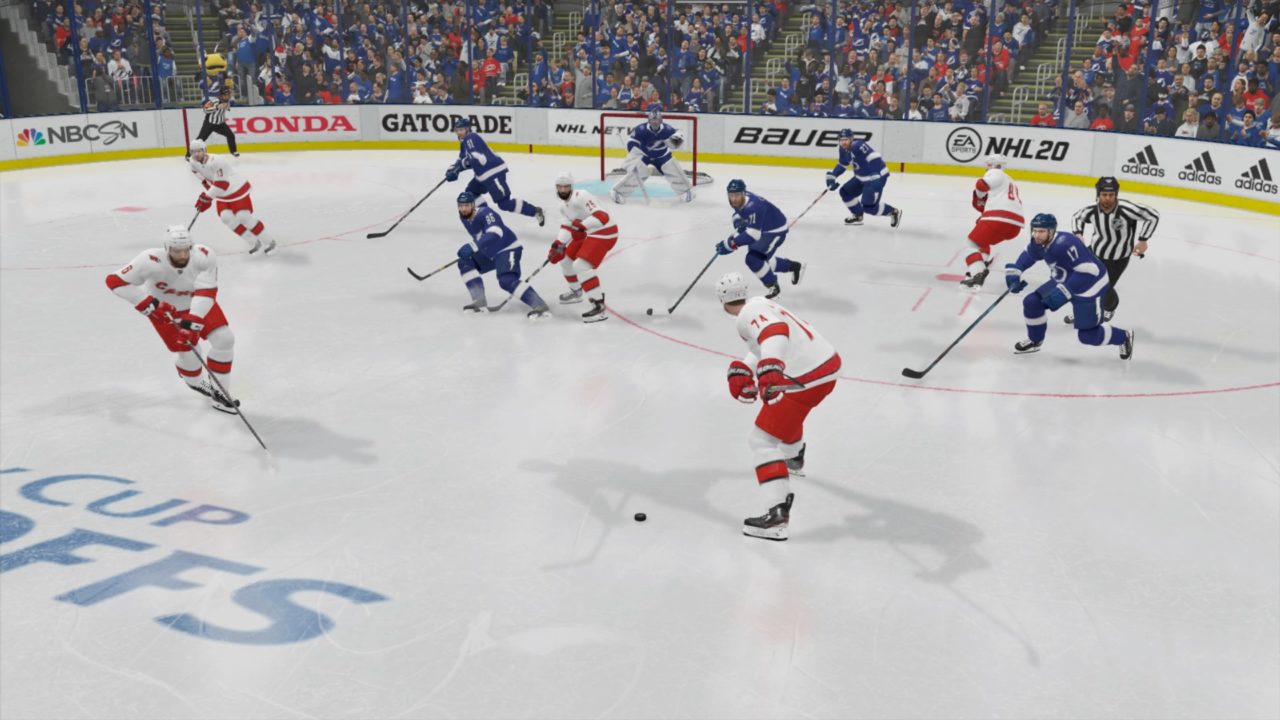 Our simulation will play out round by round over the next few weeks. To check out our results from the second round, view them here. Let’s take a look at how NHL 20 sees the action from the Conference Finals playing out. 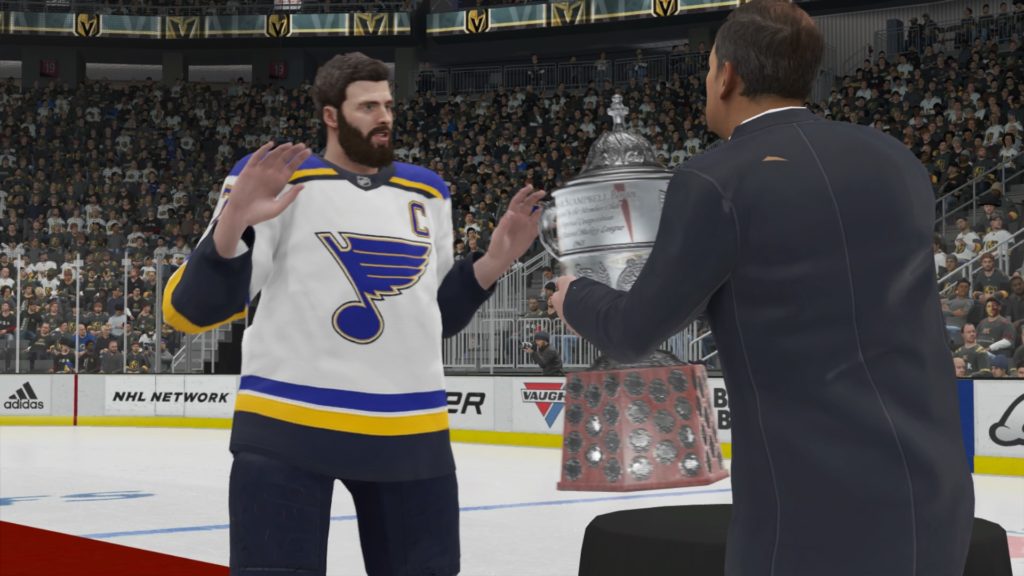 Heading into the series, the number one overall seed out West, the St. Louis Blues, have played the most games (14) of any team in the playoffs. In the first round, the Blues trailed the Nashville Predators three games to one before eliminating the Predators in seven games. In round two, the Blues found themselves in the same situation, this time trailing the Dallas Stars three games to one before eliminating the Stars in seven. Through two rounds, the Blues as a team are ranked number seven in goals for per game (2.64) — the lowest ranked remaining team — and number two in goals against per game (2.14). On special teams, St. Louis is 4/50 on the power play (8%) and 36/41 on the penalty kill (87.8%). The Blues are 4-4 at home while sporting a 4-2 record away from the Enterprise Center.

Individually, goalie Marc-Andre Fleury — 1 shutout — is ranked third in save percentage (.920) and first in goals against average (2.08).

The defending Stanley Cup champions, the St. Louis Blues, are on their way back to then Stanley Cup Finals. This was a hard hitting, physical series where multiple five-minute major penalties were handed out. Despite the Blues losing in Game 1, Brayden Schenn sent a clear message late in the game when he dropped the mitts with Golden Knights tough guy Ryan Reaves — Schenn also lit the lamp earlier in the game.

In Game 2, the Blues tied the series with a Colton Parayko overtime game winner. Goaltender Jordan Binnington stole the show in Game 3 making some huge saves in helping the Blues kill off all six shorthanded attempts against — Ryan O’Reilly also received a five-minute major for cross checking.

The Blues couldn’t pull out the win in Game 4. Just like in Game 1, a late fight would seemingly change the momentum heading into the next game — this time Oskar Sundqvist took on Ryan Reaves. Game 2 overtime hero Colton Parayko added two more goals in the Game 5 victory. Then, just like the previous three close out games in the prior rounds, Jordan Binnington collected his fifth shutout of the playoffs to send the Blues back to the Stanley Cup Finals.

Out of superstition, Blues captain Alex Pietrangelo did not touch the Clarence S. Campbell Bowl — awarded to the Western Conference champions.

For the Golden Knights, the Game 1 victory was highlighted by a pair of Max Pacioretty goals. In the Game 2 pivot, Paul Stastny chipped in his own pair of goals in the losing effort. Depth center Nick Cousins scored the only goal for Vegas in Game 3. Game 4 saw the Knights score a goal with every line in the victory. Game 5 saw previous scorers Pacioretty and Cousins light the lamp again. 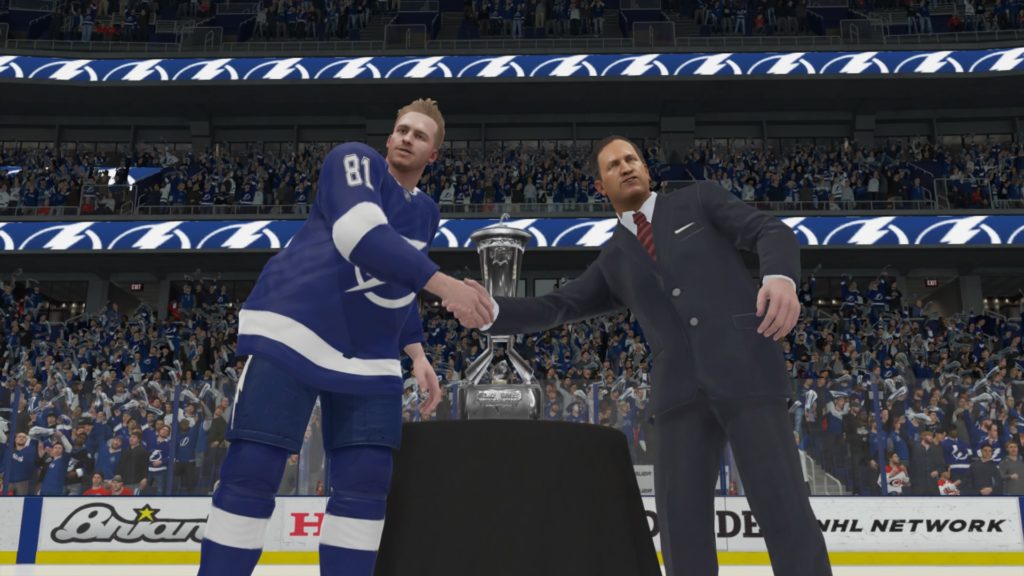 Heading into the series, the Tampa Bay Lightning have played 11 games through two rounds. In the first round, the Lightning knocked off the Toronto Maple Leafs in six games — never trailing in the series. In round two, the Lightning found themselves in the same situation quickly knocking off the Columbus Blue Jackets in five games. Through two rounds, the Lightning as a team are ranked second in goals for per game (3.27) and fourth in goals against per game (2.55). On special teams, Tampa Bay is 5/30 on the power play (16.7%) and 19/21 on the penalty kill (90.4%). The Lightning are 4-2 at home while sporting a 4-1 record away from Amalie Arena.

Individually, goalie Andrei Vasilevskiy — 1 shutout — is ranked fourth in save percentage (.905) and fourth in goals against average (2.49) out of the remaining four goalies.

Individually, goalie Petr Mrazek — 2 shutouts — is ranked second in save percentage (.928) and second in goals against average (2.17).

Out of superstition, Tampa’s Erik Czarnik — taking the place of injured captain Steven Stamkos — did not touch the Prince of Wales Trophy, awarded to the Eastern Conference champions.