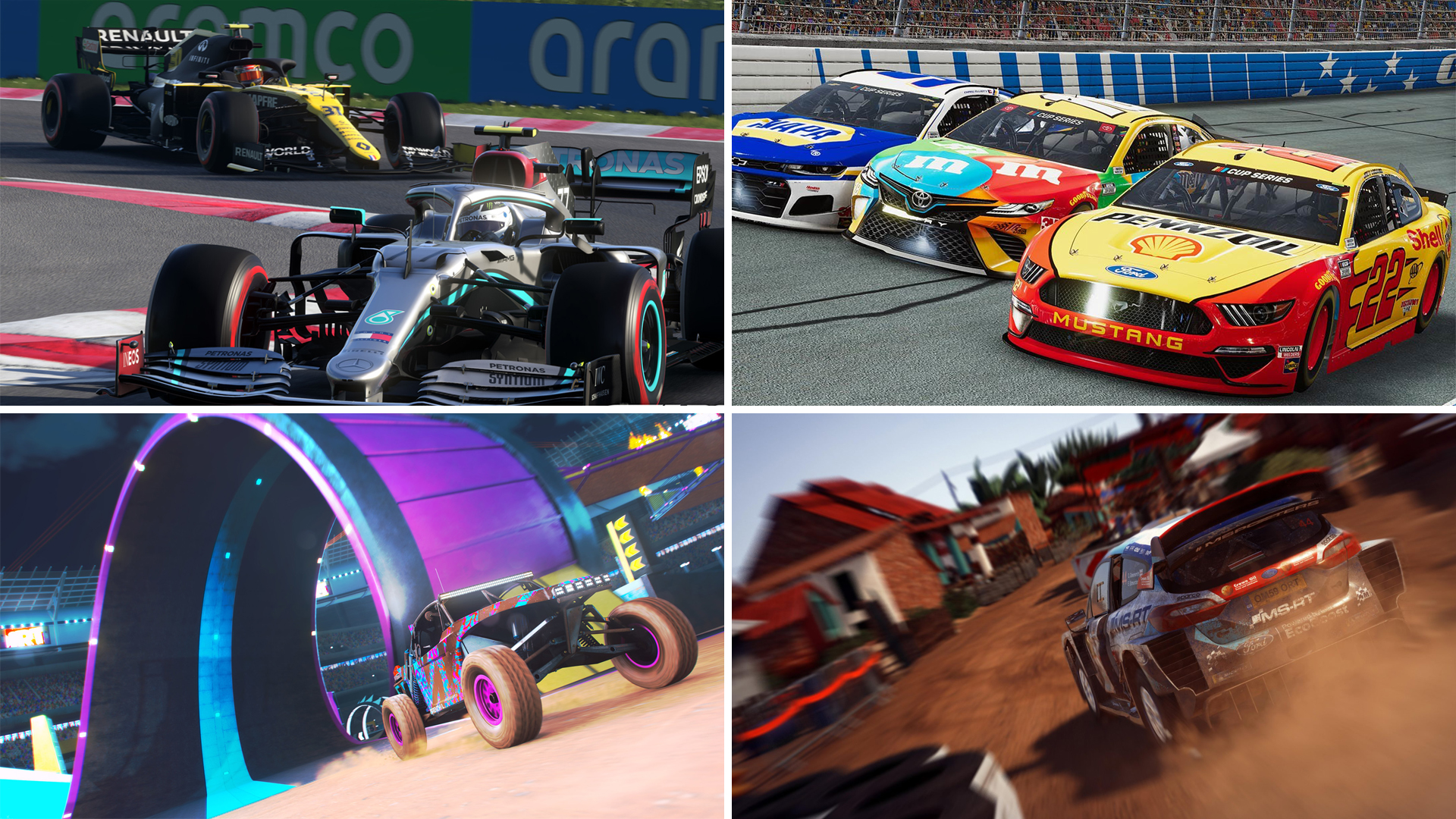 With the next generation of powerful gaming consoles now out in the wild for many of us, I wanted to revisit a few games that received the PS5/Xbox Series X upgrade and a few that didn’t but still look to take advantage of the new hardware. Obviously, the library of racing titles on both the PS4 and Xbox One is large, so I narrowed this down to two titles that actually did receive the enhanced upgrade for both the PS5 and Xbox Series X, and three titles that did not but are extremely popular even to this day.

‘‘Well, just like the Xbox One, PS4, PC, and Google Stadia versions, DIRT 5 on next-gen consoles is designed to make the best possible use of the hardware. Across both Xbox Series X|S and PlayStation 5, DIRT 5 will include an option to run the game at 120 frames per second and feature greater graphical fidelity, thanks to the new technology. Console-specific features will also be utilized, such as the new haptic feedback and adaptive triggers on the PS5 DualSense controller. More details on these features will be released as further information on next-gen consoles rolls out in the coming weeks.”

Console versions of Dirt 5 are cross-generational for online play. This means that if you’re playing on PlayStation 5, you’ll be able to matchmake with PlayStation 4 players in online action, discover and race on their Playgrounds creations and vice versa. The same applies across Xbox Series X|S and Xbox One.” 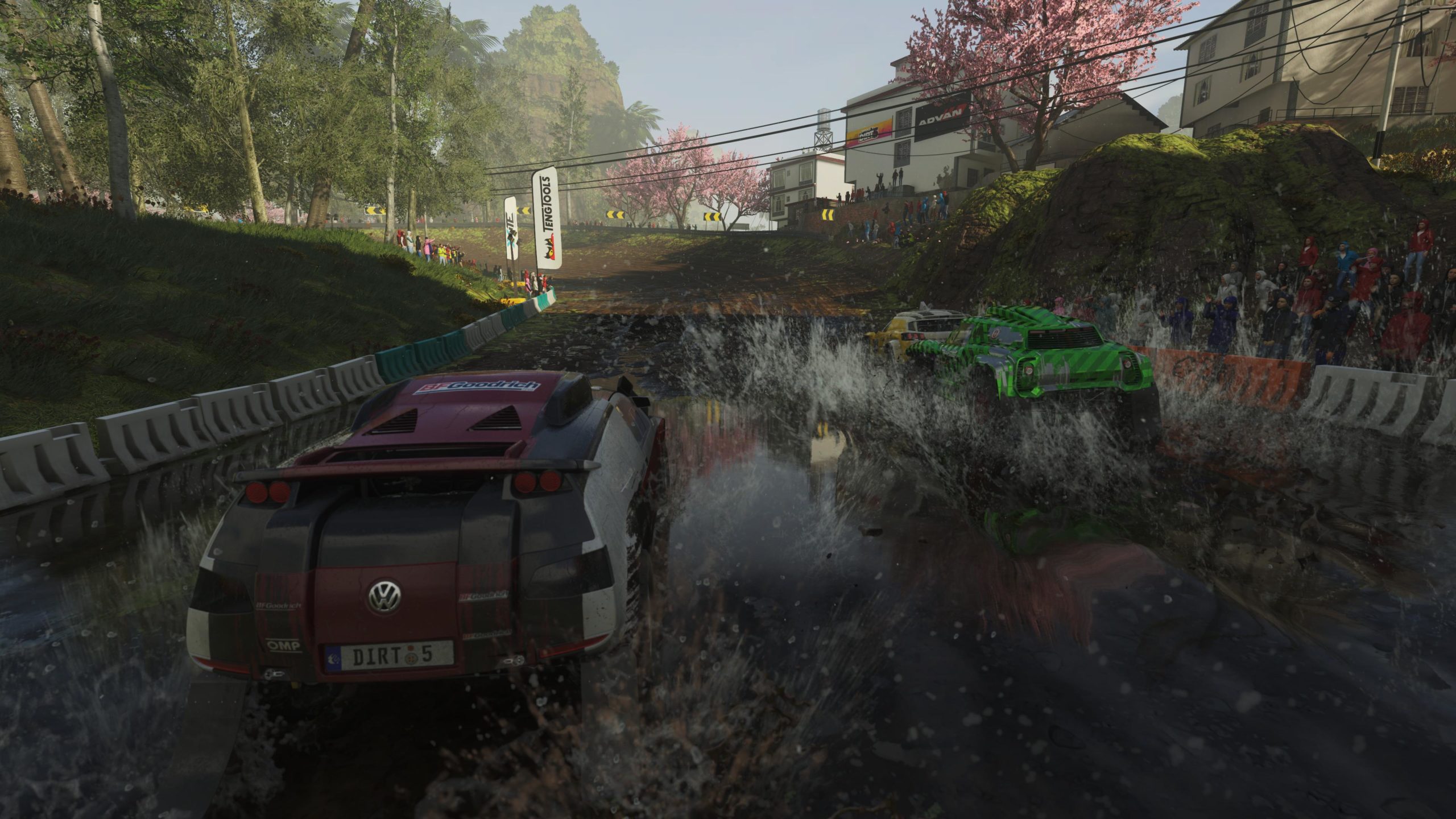 With Dirt 5, I noticed a game that took all the good from the previous console versions and enhanced them and fixed the biggest issue: the occasional frame dip from pushing the last-gen consoles to their max. Now, If I am being honest here, I loved Dirt 5 on the PS4 and Xbox One X, so any type of upgrade at all was always going to be proverbial “gravy on top” and that’s just what it is. 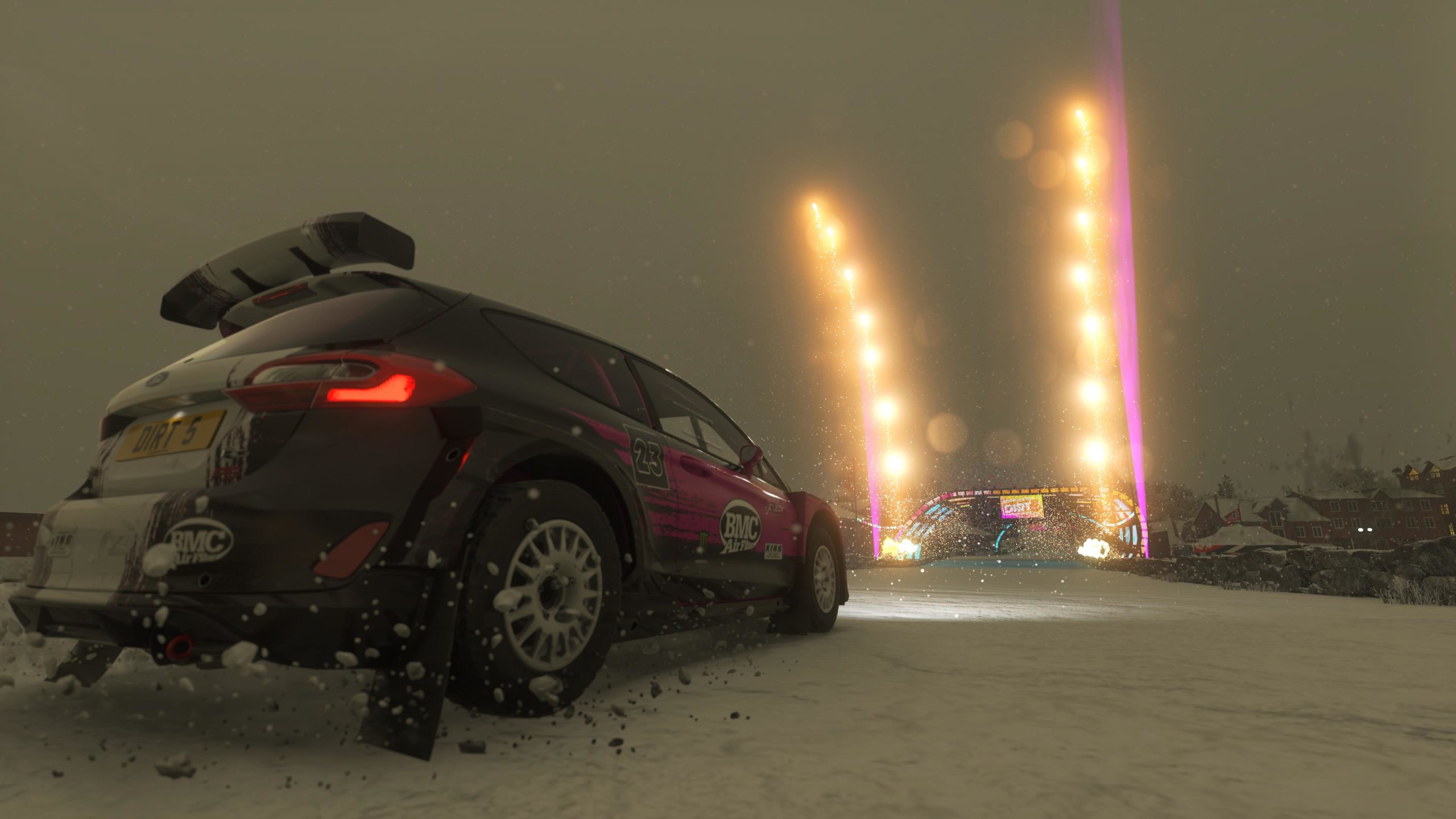 There isn’t anything that’s surprising or goes beyond what most were hoping, but what they improved they did the right way, and makes the free upgrade feel like something that easily could have had a monetary requirement attached to it.

The environments stand out more, the textures are more vibrant and fuller, and the details on the vehicles and tracks are more noticeable. Unlike with WRC 9 that I speak about below, Dirt 5’s use of the PS5’s new controller doesn’t quite have the same impact as the one in WRC 9. However, the controls still feel great and the use of the pressure-sensitive triggers can be felt often enough to make the system feel different enough from the current-gen version. 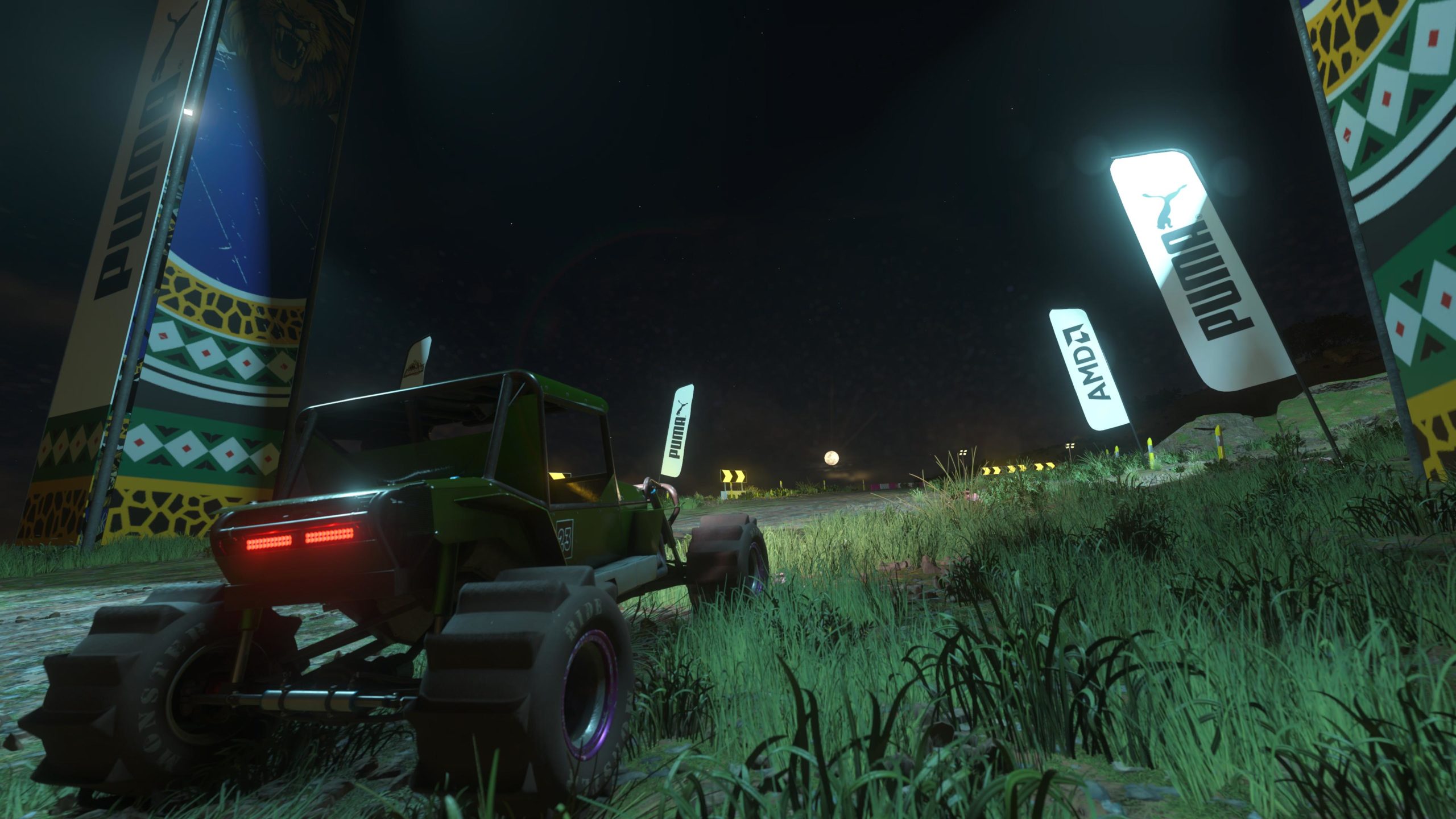 Obviously, the upgrade is free if you purchased the original PS4 or Xbox One version, and it’s a worthy upgrade. If you haven’t purchased the game yet, Dirt 5 is an addictive title that has kept me coming back more than I care to admit — and has rightfully earned a spot in my rotation.

“Providing rally fans with all the official content of the Championship and multiple improvements, WRC 9 will now be playable at 4K 60FPS for an even more immersive driving experience. On PlayStation®5, KT Racing is using the new haptic features of the DualSense™ controller to provide more realistic feedbacks.” 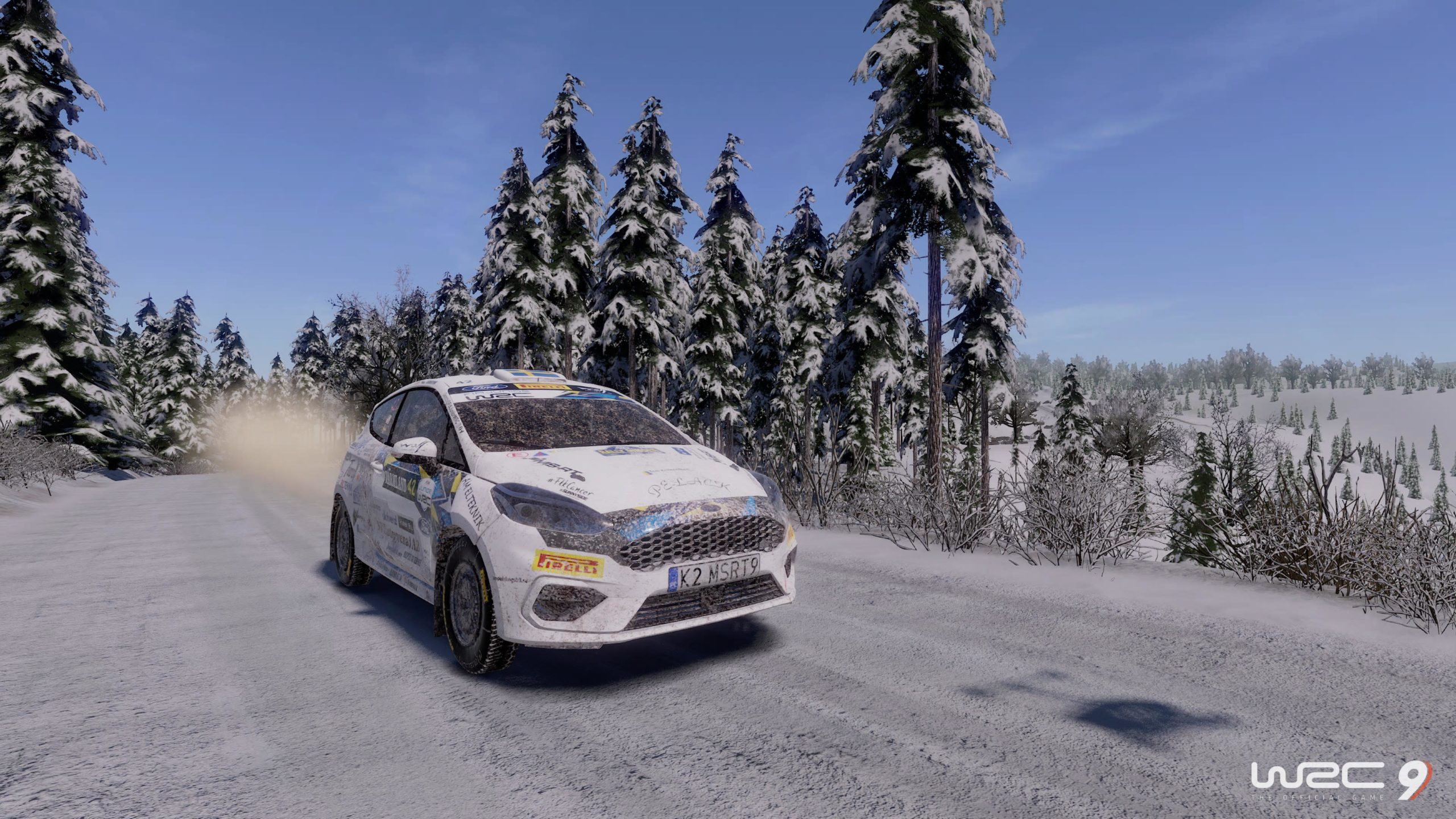 WRC 9 on the PS5 is every bit as beautiful as I hoped it would be. Seeing the title run at a blazing 60 FPS (plus) with all the environmental details come alive is what I was hoping for at the start of a new console generation.

The weather effects within the game, specifically at night, look almost photo-realistic and push the immersion level to new heights for WRC 9. Seeing the snow cascade downward or rain pouring in buckets will have you thinking twice about how you approach each turn with the new PS5 controller with enhanced haptic feedback. 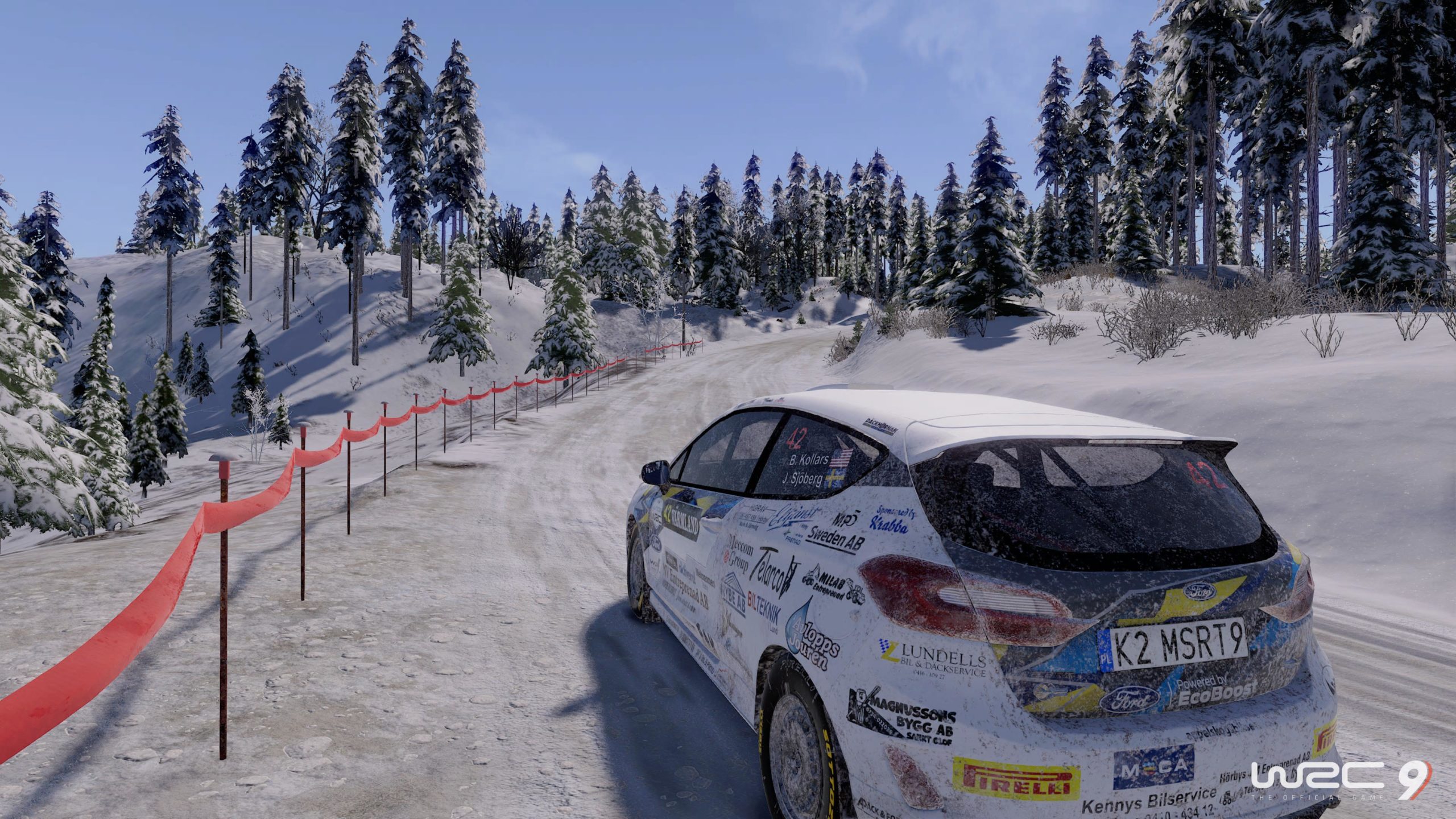 Speaking of controllers, the PS5 controller is a big part of bringing WRC 9 to the level of next-gen. From the haptic feedback of feeling the terrain of the various venues to the vibrating in your hand to the environmental surroundings and co-driver blaring out through the speaker system, the new PS5 controller takes WRC 9 to the next level on Sony’s next-gen system. 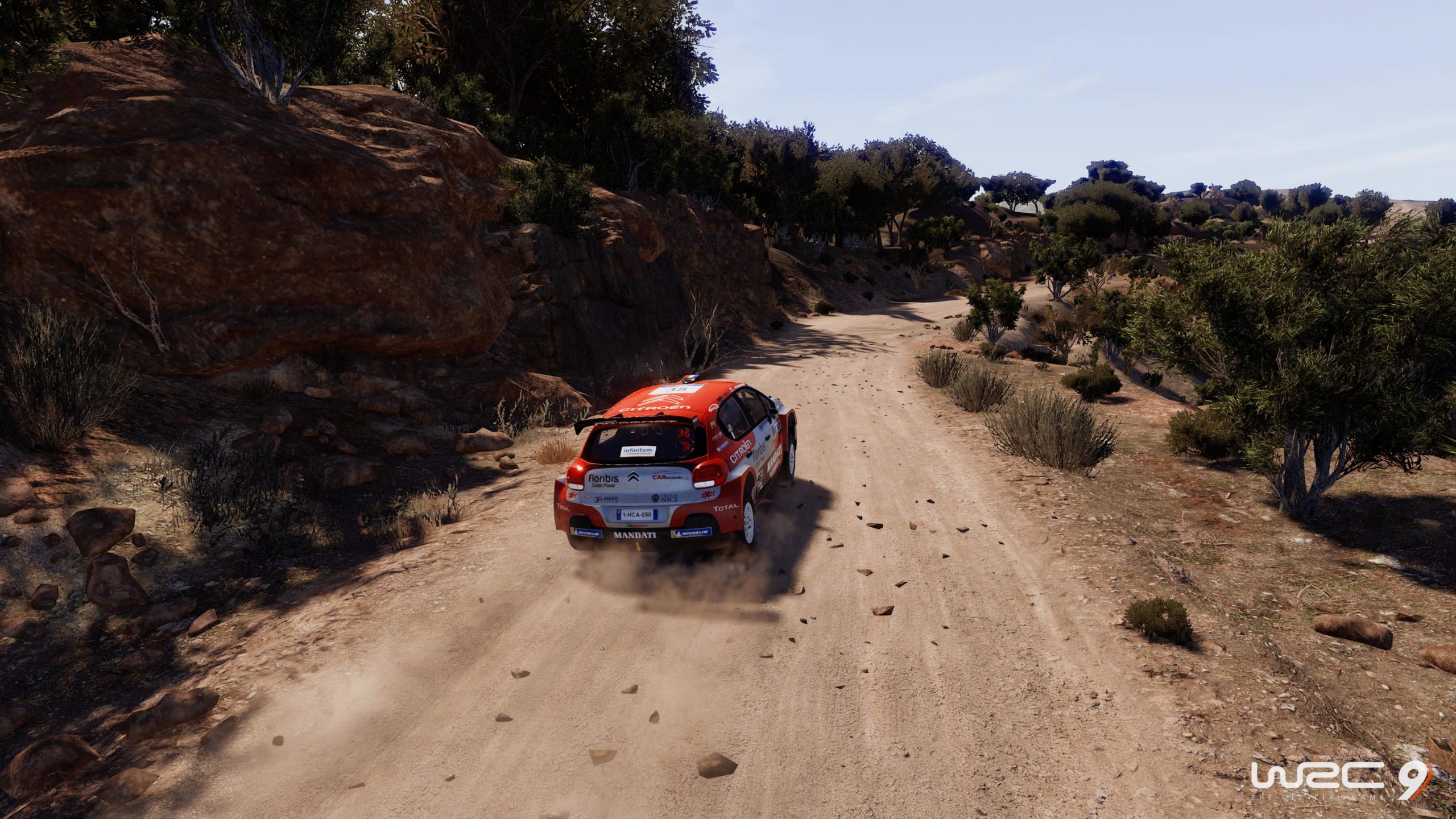 WRC 9 was already great looking on the current gen of systems, and seeing and hearing it on the new consoles takes everything I loved about it and amplifies it further.

I specifically gave Dirt 5 and WRC 9 their own category, as both Codemasters and Kylotonn developed a separate upgrade for both the PS5 and Xbox Series X. That said, I also wanted to look at some of the more recent racing titles that may or may not have the ability to take advantage of the new hardware. In theory, all games should look better on either of the new systems, but as we all know by now (the ones who have taken the leap) this is simply not the case.

Some titles have struggled to perform well, and some look worse than they did during their original release. There are issues with frames per second dropping, graphics and textures that are blurry, and load times that are, at best, marginally faster than they were on the PS4 or Xbox One.

NASCAR Heat 5 is one that looked to degrade with the jump to the PS5. The jaggies are way more noticeable, and while the frame rate is solid, the overall quality of the details and textures seem to have taken a hit. 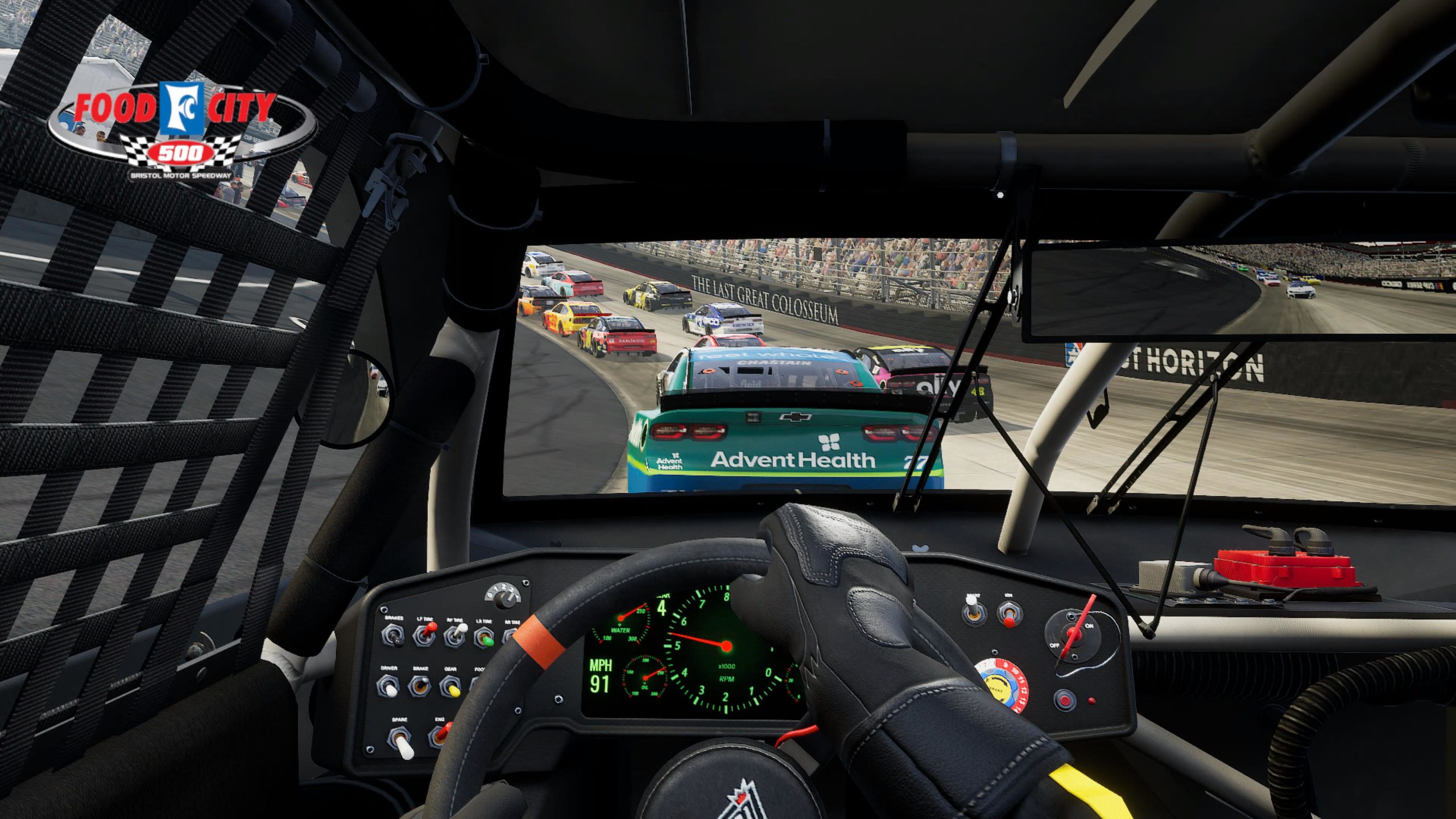 This is where I might blame it on the Unity Engine, but I have seen and played other titles built within Unity, and at worst they look and perform the same as their last-gen counterparts. Now, 704 Games has given no indication that it has provided any enhancements for NH5 on either system, so it’s not a “them” issue. 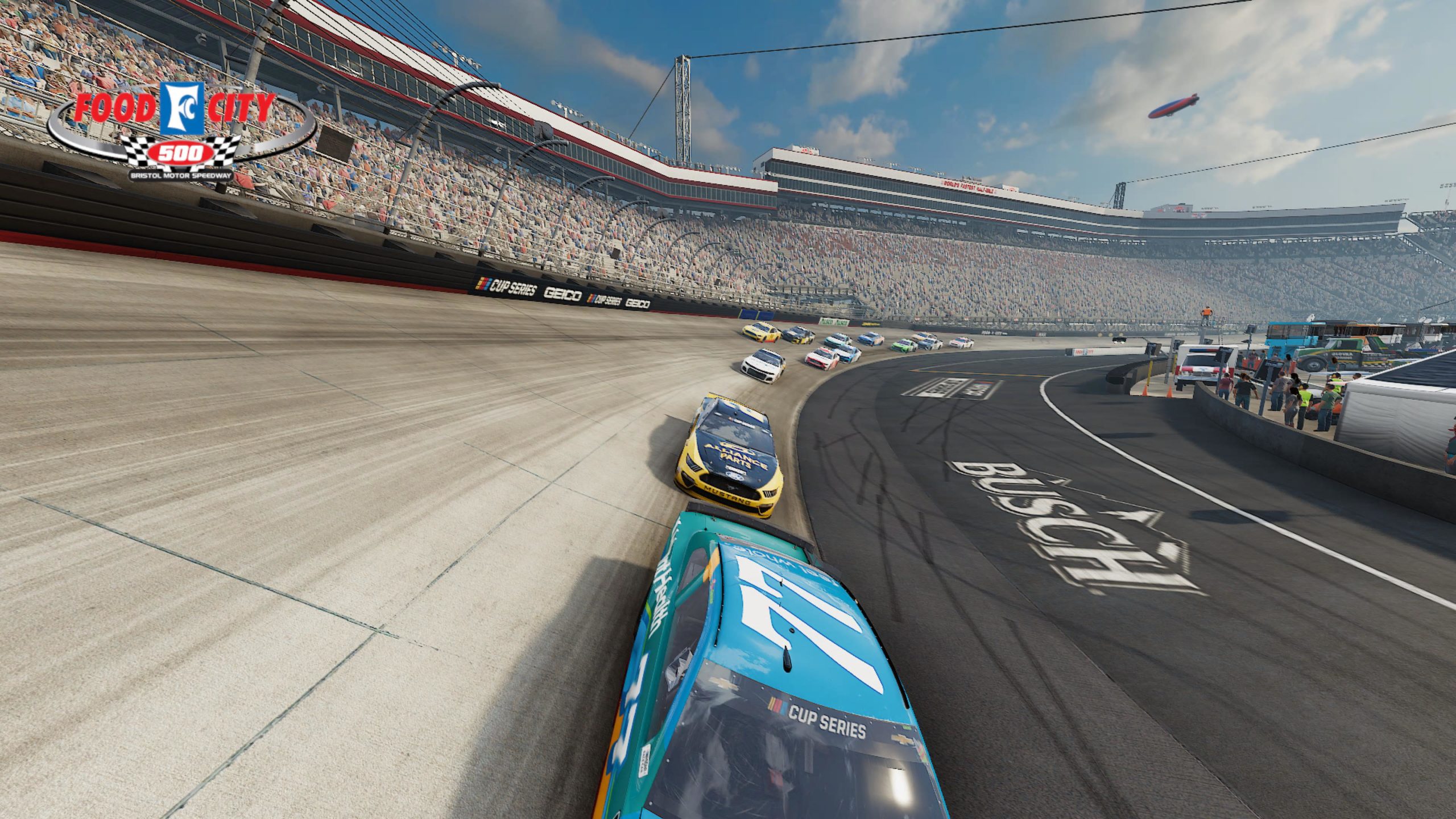 The bottom line here is if you have unpacked your shiny new system and downloaded NH5 hoping for an upgraded experience, other than the frame rate being quite good, the best experience will still be found on the PS4, the Xbox One X or PC.

Again, Codemasters has promised nothing regarding next-gen enhancements for its latest F1 offering, but much like the original release, it looks great on the PS5. Whether you are racing in real-time, online or in replay mode, F1 2020 looks and performs just as well as it did originally.

The load times seemed a bit faster on the PS5, but graphically it was identical to what I experienced last gen on both systems. So, if you are looking to carry on your career or have an online league that you are vested in, have no worries in regards to upgrading to the new systems here.

A side note of sorts here as well. If you haven’t purchased F1 2020 as of yet and are looking for a deep racing experience that is accessible on many levels, I cannot recommend F1 2020 enough. I did the original review for this game and it is still as addictive and enjoyable as it was when it initially dropped on the Xbox One and PS4.

As far as the many racing titles I tested out on my PS5, I have saved the best for last. That would be Sony’s own exclusive Gran Turismo Sport. Now this game has no other advantage than already being produced exclusively for Sony, but you wouldn’t know that it has no enhancements attached to the migration.

If someone showed this game off being played on the PS5, there would be many who would think it’s an actual launch title for the system, and that’s no exaggeration. Everything about the title screams next gen.

From the frames per second, to the texture quality, to the wonderfully detailed venues and environments, to the faster loading times, GT Sport is an amazing game that I would call a non-enhanced, enhanced experience.

Needless to say, if you are just joining the Sony family with a PS5 purchase, this is a must-have title and now can be found for a mere $19.99. It also delivers a strong offline and online suite of offerings to keep you busy for the foreseeable future.

As an owner of both the PS5 and Xbox Series X, there are some amazing future racing titles that I am excited about. Games like Forza, Forza Horizon, Gran Turismo, NASCAR, F1 and many more. These titles will be made with specific versions for each console, and no enhancements will be needed, and that’s enough for next-gen racing fans to get excited about.

For now, though, there are still a plethora of racing titles that are currently available, and while some perform better than others, take the leap and find out for yourself. The racing genre is trending upward and has been for the last few years, And with the release of the new generation of consoles, the amount of power each system provides should see that trend continue.