Career mode is where I spent a large majority of the time, and in no way do I regret that action. It is a progressive format that had me chasing wins and beating challenges in order to move on to the next level. I found myself racing on ice, climbing mountains, delivering performances in Gymkhana inside local stadiums, and racing sprint cars around an oval — just to give you an idea of how many different styles of racing there are inside Dirt 5.

The approach for career mode was making each race quick, full of action and full of excitement before moving on to the next. In each race or challenge, you will find yourself fighting for XP, Rep points, Cash and Rewards. The combination of these is what allows you to buy new vehicles and liveries, unlock new items and so on.

The storyline that coincided with career mode is surprisingly well done, and the voice acting delivered during the local press conferences and podcasts was interesting enough to stop and absorb. Not only was the storyline well done, but It also pushed career mode forward and gave a bit more meaning to each race.

There is a lot to do in career mode, and if you’re anything like me, you will struggle to set the controller down and walk away. I kept wanting to take on the next challenge and continue to unlock new items, and it became extremely addictive in a fun way.

They say that variety is the spice of life, and Codemasters has taken that saying to heart. In Dirt 5 I had multiple choices in vehicles, weather, day or night cycles (or both), vehicle liveries and designs, and environments to race. Some I absolutely loved, some were interesting, and some may have not been my favorite but I still found enjoyment in them.

Saying that there is a lot of variety in the game is great, but there is a reason that variety made the list of what I like. The options the game throws at you in terms of vehicles, tracks, environments and weather help keep the game feeling fresh. Even after almost 15 hours spent with the title, and racing every track the game had to offer, the rotation of situations had me feeling like each race or challenge was unique and new.

Dirt 5 sets out and accomplishes what many games try to do — but often struggle to pull off — and that is making you want to come back for more the minute you put the controller down. There is a high level of addiction here because the developers at Codemasters knew exactly what they wanted to do and were successful in implementing their approach.

All the action comes at you fast in Dirt 5 and that’s intentional. The game is not a licensed racing game that follows a schedule like F1 or NASCAR, and so for those who are looking for instant action and lots of it, Dirt 5 will hit that spot.

If the goal of the developers was to take you to exotic locations and places that only the mind can dream of, then they accomplished that goal and much more. The tracks and locales feel alive, draw you in and make you feel like you are there. Nothing is too over the top, and you never stray too far into the absurd, and the difficulty of navigating some of these courses is legitimate.

Whether it’s rugged mountains, steep drops or incredible jumps, you never really feel comfortable with what is coming around the corner, and I found myself constantly referring to the track map in the bottom left-hand corner of the screen. I did this because if I waited to have the obstacle or turn in my view, it would usually be too late to react.

As if that were not enough, the game starts to throw in day-to-night transitions, and blinding snow and sandstorms that make seeing more than 25 feet in front of you almost an impossibility. The weather effects are so well done that it was hard not to appreciate them and then curse them all within a few seconds of each other. During these extreme weather patterns, I had to utilize the track map even more, or risk flying off a cliff or headfirst into a stone wall — that’s no fun for anyone, except for those watching on Twitch perhaps.

The racing in Dirt 5 is solid most of the time but can be occasionally unbalanced. More times than not the AI gives a solid effort against you, but there were times where the AI felt a bit overpowered or underpowered. What is consistent is how hard the drivers fight and claw you for position. So if you’re looking for a racing game where the AI driver(s) just moves over to let you pass, you should keep on looking elsewhere.

During each race, I was tasked with certain in-race goals, such as trade paint 10 times or overtake five drivers. While these types of goals are nothing new to race games, the difficulty in accomplishing these goals can be somewhat daunting. The AI drivers race every bit as hard as what you will see online, and it doesn’t always seem fair. The word “etiquette” is not part of their vernacular, and they are quick to remind you of that fact from the moment the green flag drops.

Trust me when I say there will be times that you have a few choice words for the AI drivers in Dirt 5, and that whole “trading paint” challenge will feel great. In the end, the AI racing a good blend of fun, competitive and sneaky all wrapped up in one nice package.

As I have mentioned, there is an awful lot to like and do in Dirt 5 regardless of what style of racing you want. Whether you want to show off your creative side or mock your friends about who is the best, there should be something here for you to enjoy.

This may sound petty to some, but for me, the handling of the sprint cars in Dirt 5 is some of the worst handling and control I have ever seen applied to a sprint car in any game I have ever played — and trust me, I have played all of them. While I absolutely love the control and handling on every other vehicle in the game, the sprint car handling was bad enough to make me want to sit the controller down for a bit and take a break. 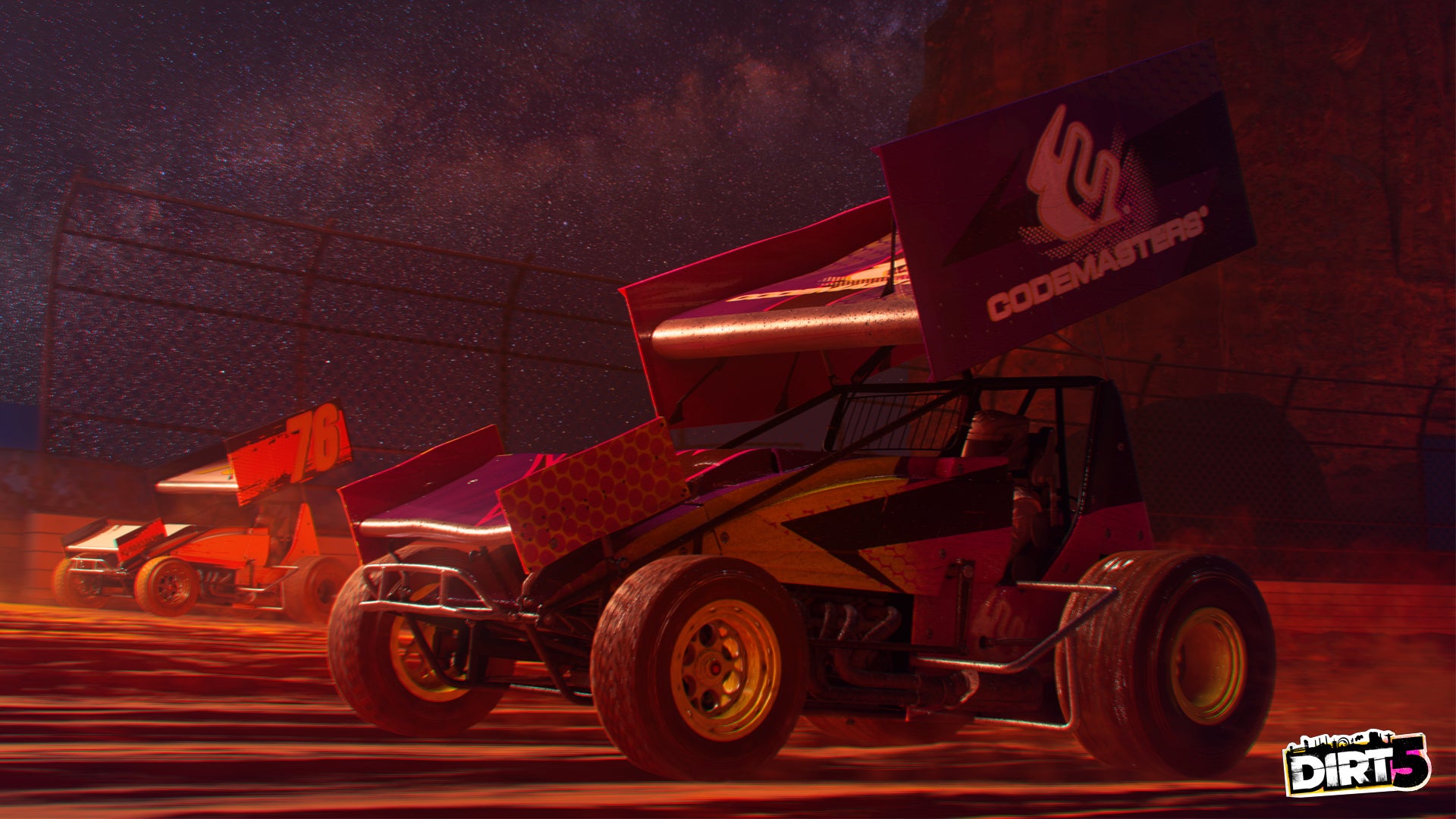 What makes it so bad? The precision is just not there, like at all. I must have raced at least 10 sprint car races, and by the last one I had seen very little improvement in my ability to have any semblance of control for more than a few seconds at a time.

Livery Creator (Or Lack Of One)

Let me first start by saying that the options to create a livery and paint scheme in Dirt 5 are pretty darn solid. The number of sponsors available to apply to your vehicle is impressive, and creating a scheme and applying it is accessible for all. Sounds great, right? And it is, but I do wish the developers gave me the option to create something from my imagination without being handcuffed by what was available in the game.

Games like Dirt 5, which do a magnificent job of promoting each vehicle in such detail, should let me take advantage of that with a blank canvas. I kept looking at each vehicle while in the creation suite and having all these wonderful ideas run through my head, and yet had no way to make those ideas come alive.

Now this one was hard to list on things that I don’t like because I love the damage model used in Dirt 5, with one exception. That exception was its inconsistency. When it worked properly, the damage for each vehicle looked as good as any that I have ever seen. However, too many times I found myself wondering why a car I was driving that just flipped three times only had minor scratches on it, while there were other times where I hit a railing and the hood would crumple and fly off. 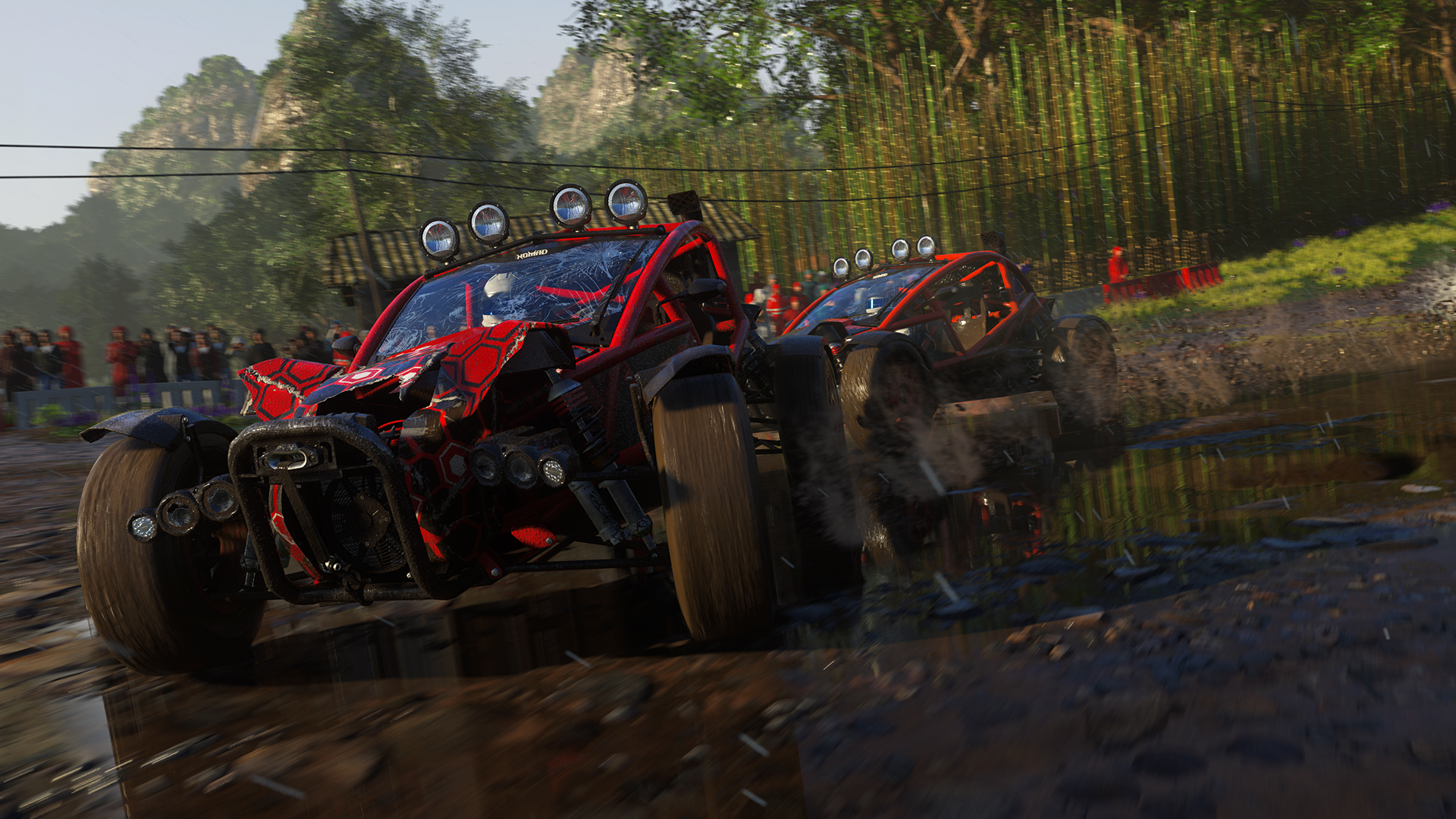 This will not be a huge deal for many, and if I am being honest it wasn’t for me either. But it is worth mentioning, and the further along you play, the more you should understand what I’m talking about here. It’s a shame to see such a beautiful damage model end up being a bit too inconsistent, and you won’t fully realize how much of a missed opportunity this is until they see how wonderful the damage can look on different vehicles.

Dirt 5 is one of the best racing games to drop this generation. There is a high level of immersion and fun and a level of addiction that reaches that same level. The environments are detailed and realistic and the cars look just as good. The controls feel exactly how I wanted them to feel, and even though the sprint cars need tweaking, the rest of the vehicles all feel different and bring something unique to the table.

Codemasters saved the best for last, and fans of rally, off-road, dirt, simulation and arcade will find something to enjoy about Dirt 5. That level of enjoyment will be extremely high for the majority of those who take the plunge.

Dirt 5 will be available on PlayStation 5, Xbox Series X, and Series S, PlayStation 4, Xbox One, Microsoft Windows and Google Stadia. As I mentioned before, if a next-gen upgrade is a concern, Codemasters has you covered. Owning an Xbox Series X or PlayStation 5 with a disc drive will mean that you can redeem your free next-gen upgrade, whether you purchase Dirt 5 physically or digitally for current-gen consoles. If you purchased the game digitally, your new console will automatically receive this information and make the next-gen version available to you. If you purchased Dirt 5 on disc, insert the disc and follow the platform’s instructions to get the optimized version.