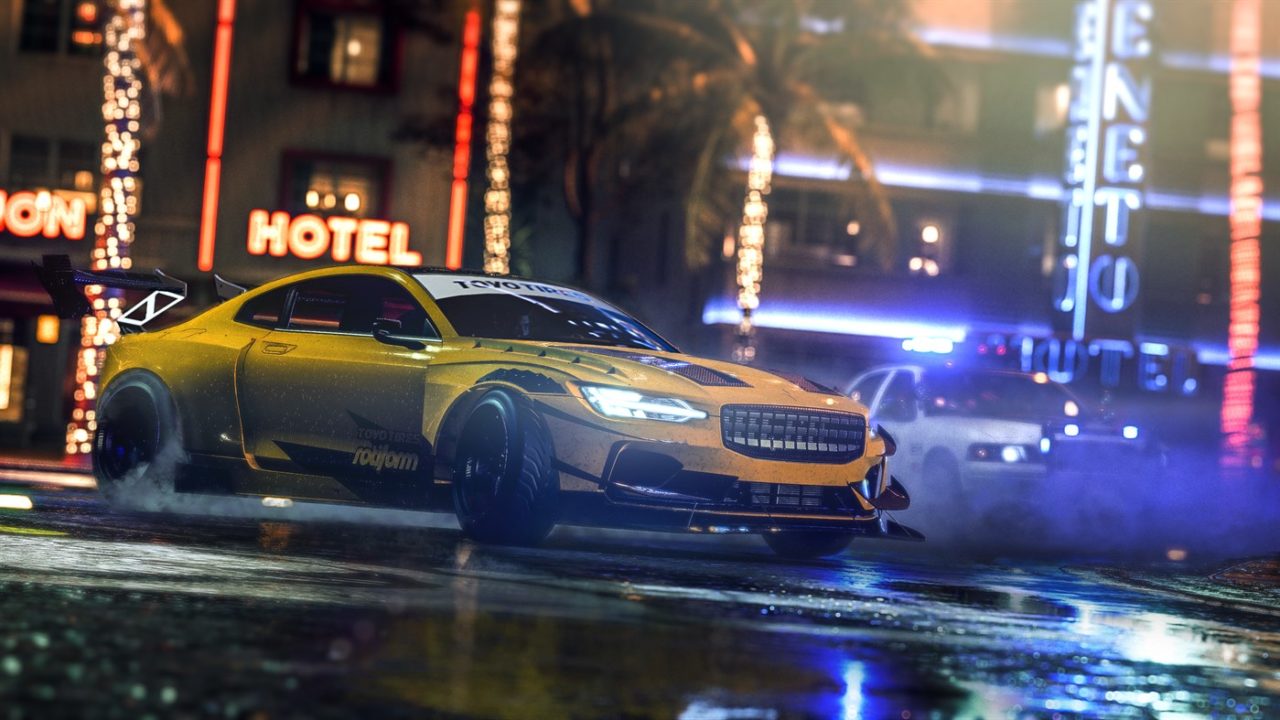 Electronic Arts and Ghost Games are hitting the streets with their newest racing title, Need For Speed Heat, the follow up to NFS Payback. This iteration promises better police chases and more intense action. In their words, Need For Speed Heat will let gamers lay it on the line, competing to win bank in race, drift and off-road events.

For me, it has been a few titles in the NFS series since I was genuinely drawn in for the long haul, so let’s find out if Heat is the title that will be bringing me back. 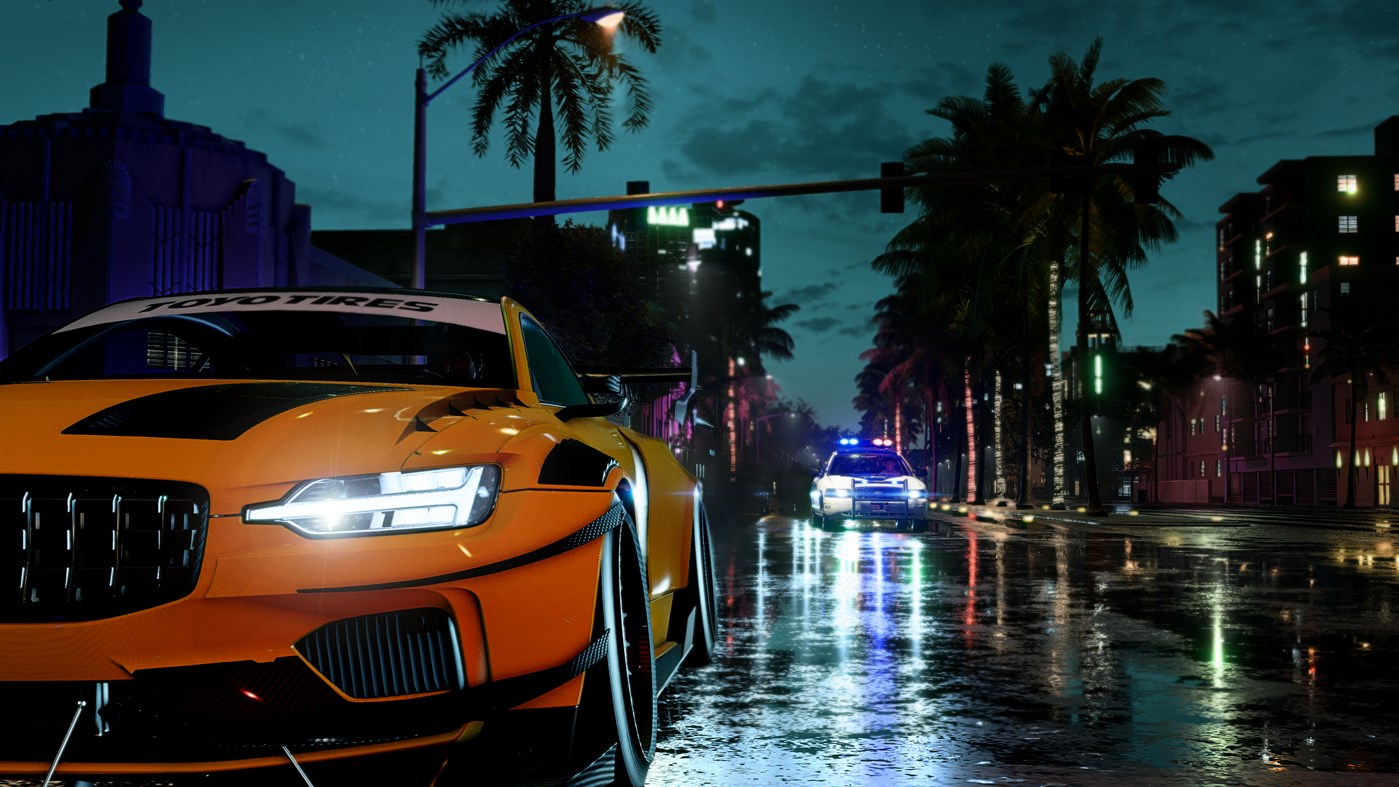 Of the areas that Heat covers well, the graphics department sits atop that list. The title is just as beautiful and seamless in motion as it is in a snapshot captured for marketing purposes. Even better, the graphical enhancements have zero adverse effects on the frames per second for NFS Heat.

From the car models (which are gorgeous) to Palm City, and all the tidbits in between, Heat delivers an incredible looking experience that is blazing fast. Even more impressive is the fact that a vast majority of Palm City is destructive, and the frames never blink an eye while still maintaining a deep level of detail.

Some might take issue with handling being listed as a positive here after they play the game, but for me, it’s the truth. However, that statement does have a caveat attached to it. The controls are reliable and responsive for an arcade racer after you’ve accumulated enough rep points and bank to upgrade your vehicle(s). The car’s handling at the start of the journey might feel a bit like you’re on rails, and improving your vehicle does take some commitment to achieve the in-game goals. So, the overall handling is a bit dynamic throughout the game, and some may find different styles more to their liking. 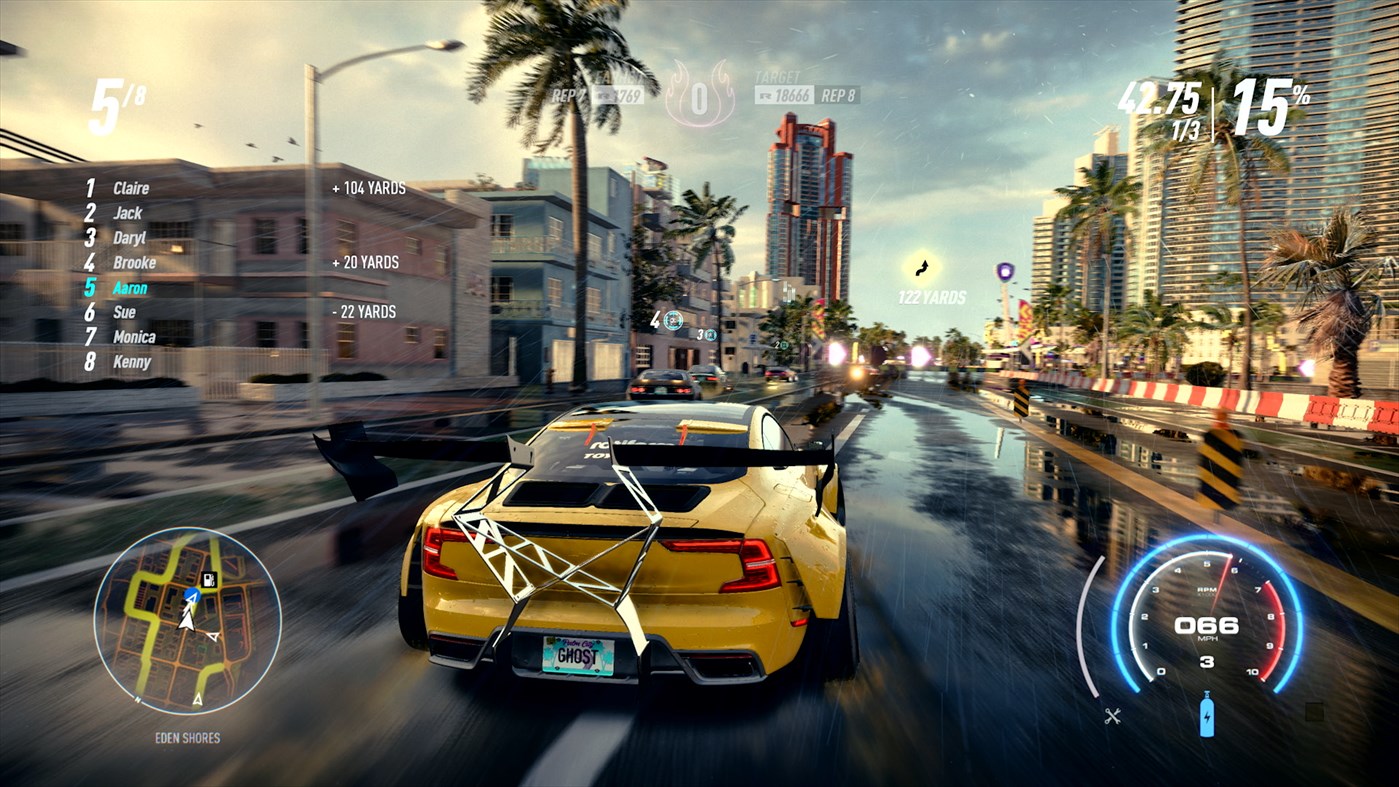 Need For Speed Heat also relies heavily on the drift system early on, so how the controls handle can also be predicated on how well the user has grasped the in-game drift system. My only real issue with the handling and controls of NFS Heat has nothing to do with the control system itself, but rather the lack of in-game wheel support.

In today’s world of racers, it is essential for users to be able to add their unique style to their car, their driver and their outfit. Thankfully, NFS Heat comes through with flying colors in all the above categories. Without giving away too much detail, the game allows you to paint, repaint, apply decals, create and adhere, and do so in a multitude of ways that add a personal layer to the game. 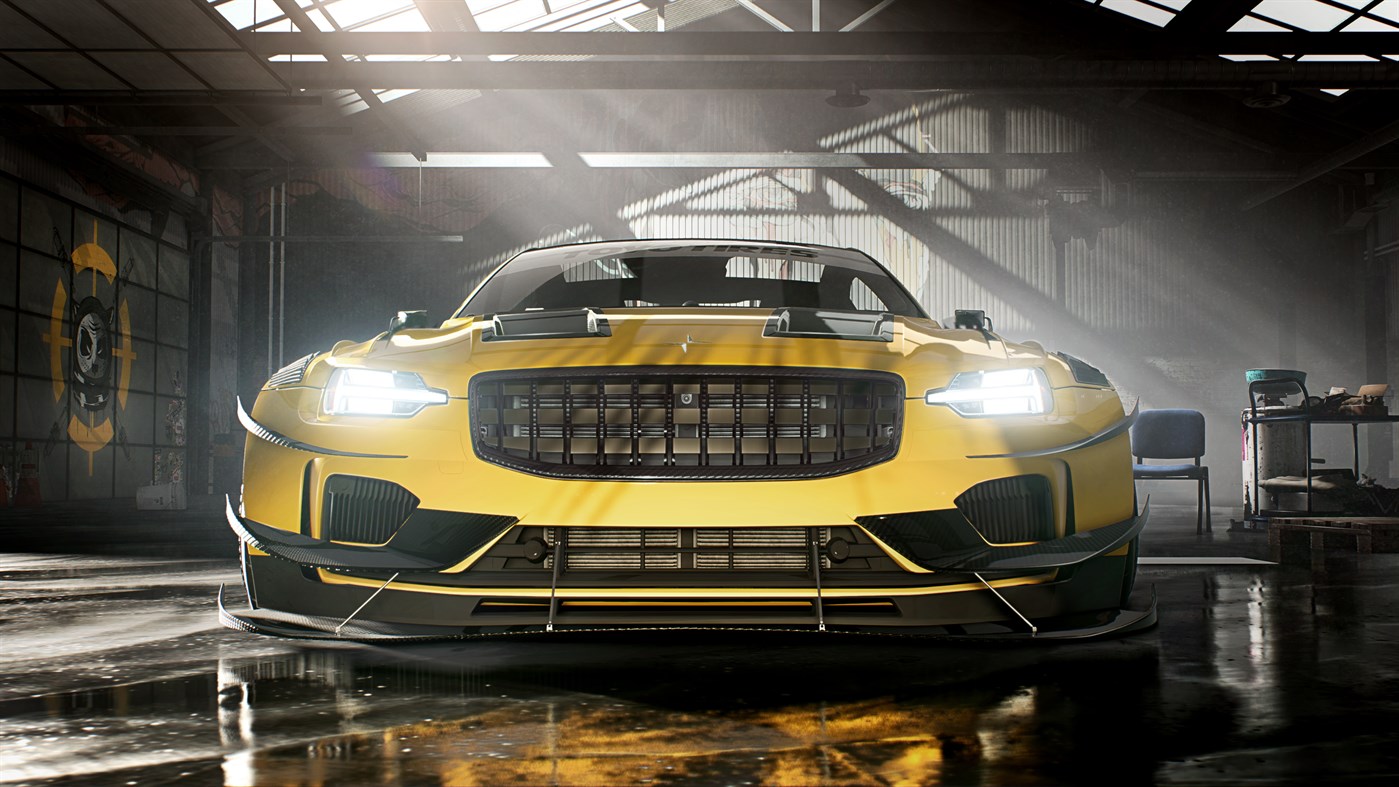 Moving beyond the customization, playing the game on the hardest difficulty can result in some intense moments, races, and police chases, and the more upgrades you have purchased and applied to your car, the better your chances are of coming out on top in any of the scenarios. Some of the police chases can be incredibly difficult to “escape” on the hardest difficulty, especially when the amount of police that is chasing you starts to multiply.

So, a full understanding of the task at hand, the type of race you enter into, or the daily goals you are trying to achieve will help dictate what modifications you will want in your car. The wrong upgrades can make achieving some of the game’s goals to push the story forward quite a bit more difficult — so choose and apply wisely.

Once again, this an area that can give an awful lot away for people who want to experience the game without spoilers. I will simply express that the story itself is compelling, the characters are likable, and the action, gameplay and story mesh together very well. In an arcade racing title, a developer could easily be complacent with the story and let the action dictate the enjoyment one gets from the title, but in Heat the story pushes the action and the action pushes the story.

One never realizes how much the sound of a game can and does add to a title until it’s done poorly. Thankfully, the sound (and soundtrack) in Heat is implemented incredibly competently. From the sounds of the engines revving and the tires screeching, to the collision of the vehicles and the cops saying mean things to you during the chases, Heat sounds excellent in almost every facet and helped to suck me into the world of Palm City.

This is less an indictment of Need For Speed Heat and more a criticism of arcade racing titles as a whole, but the fact is that Heat does lack some depth, and thus longevity could be an issue for many. The graphics are stunning, the customization is great and the story is solid, but it can be quite repetitive. 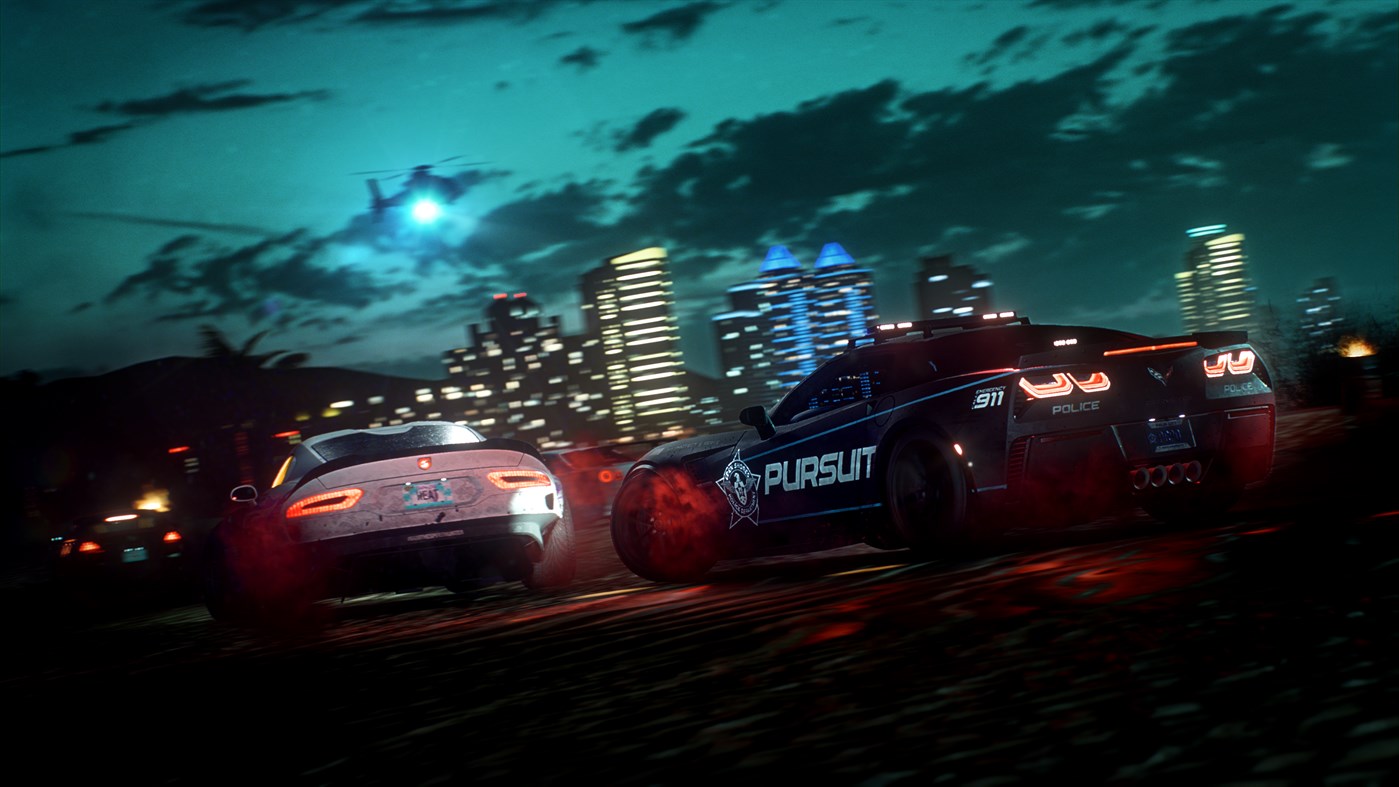 You can choose between day and night racing, and the title goes by a daily clock regimen. But whether you are racing for cash or rep points, it’s still just racing with no real end game other than to see the story unfold.

Not everything is terrible when it comes to the damage model in Heat, but it still lands here in my negatives. With this game, the more damage you take, the less responsive your car’s performance becomes. This can be extremely important when trying to outrun the cops or beat a rival crew member in a race. My issues all stem from the lack of visual damage that I’ve experienced throughout the scenarios I just described.

When I hit a median headfirst doing 140 mph, I expect to see car parts flying everywhere and tires bouncing down the interstate. At times, Heat does show some small instances of damage, but never enough to honestly sell me on the disparity between the collision and the impact on my car. 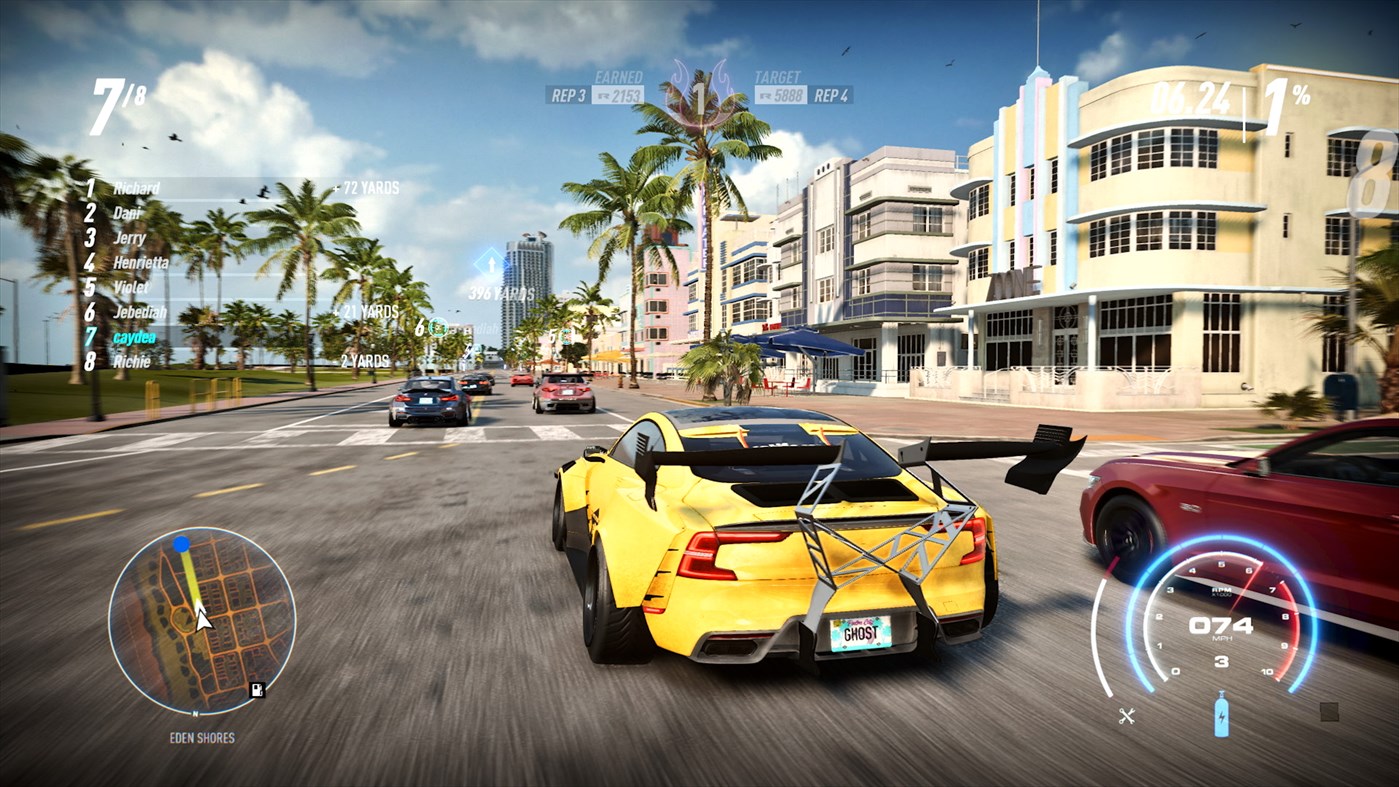 I get it, it’s an arcade racing title. However, if the damage model from the Burnout series were implemented into the NFS series, the level of adrenaline-induced excitement and “wow” moments would add some needed depth and longevity to the title.

Need For Speed Heat does a lot of things right, and delivers an aesthetically beautiful and fun experience. The only major issue is that experience will vary greatly in time depending on the individual. For those who love the series, this is an obvious game to add to the rotation. For those who are merely interested in seeing what’s here, it might be wise to try the 10-hour trial available through EA Access before you jump in with both feet.

Lonely Mountains: Downhill Review - Trials and Flower Had a Baby
Football Manager 2020 Review: This Noob Will Be Back for More