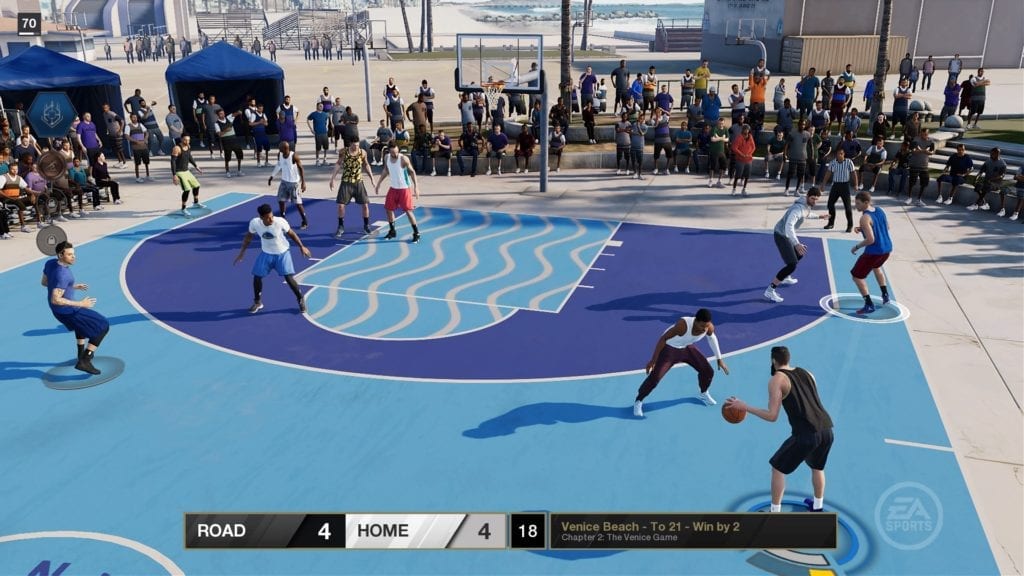 We are now a few days removed from my initial thoughts on NBA Live 18.  As promised, I’d like to expand a bit on the game modes where you’ll be spending most of your time.  Starting with… Remember when your mom told you that if you didn’t have anything nice to say, don’t say it at all? Unfortunately, that rule doesn’t apply here as I need to look at the good and the bad, and Live’s franchise mode falls in the latter category. In short, the Franchise mode in NBA Live 18 is, for all intents and purposes, unplayable in its current form.

At its core, it feels like single NBA seasons linked together with the draft and free agency wedged in between. You start any franchise with your first game of the upcoming regular season. Instead of progressing by days, you progress by weeks, which is an odd choice for a basketball game. During the season, you can make tweaks to your roster by initiating trades, signing free agents, and upgrading your players (more on this later). And…that’s about it. Ten years ago, this would be perfectly fine for a franchise mode. But today? It doesn’t work.

Sure, you can view some basic stats, browse the standings, and things of that sort. But there is no trade block or trade finder. There’s no way to plan ahead for the future by looking at your cap breakdown, browsing your upcoming free agents, and starting contract negotiations. There is no relocation committee. There is no draft scouting. Heck, even the relatively simple concept of Bird Rights is nowhere to be found.

This doesn’t even address all of the bugs that many have referenced in our forums, including the lack of computer trades. As in the computer does not make trades at all, either with you or each other. And initiating trades yourself is a mixed bag. When you select a player to be traded, you see their interest level, which I assume is how interested the rest of the league is in this player. From there, you can flip through the other teams to see who catches your eye. As the Spurs, I proposed an Aldridge-for-Embiid swap, just to see what the Sixers would say. The computer told me this trade could not be completed because my team would be over the cap.

But this doesn’t make sense because, as the Spurs, my proposed trade would reduce the amount of salary on my books. And the Sixers were way under the cap. Basically, this trade was rejected because the computer told me it doesn’t work under the cap when it absolutely does work. This is going to require some patching before it’s playable.

If there is one area in particular I like, it’s player progression. Instead of sending your players to training camps or workouts or practice or whatever else, each player on your roster earns experience points as you play and/or sim games. You can spend them as you get them or let them accumulate. The choice is yours, and that’s a good thing. The best part is you aren’t just spending points to upgrade your player in general. Rather, you are upgrading specific attributes.

So, let’s say you have a big bank of XP for Andre Drummond. If you feel his ceiling is a great role player as opposed to an all-around superstar, maybe it makes sense to use all the XP for rebounding and defense, ignoring the offense. Or, if you believe he can get to that next level, spread the wealth around. Again, the choice is yours. And this is the case for not just a few players, but each player on your team.

Beyond that, I can’t find too much positive to say about the franchise mode. The lack of features would be bad enough on its own, but combine that with the current bugs and it just simply is not playable in its current form. Now, if you’re looking to control an entire team over more than just an exhibition game, you do have another option. If you have experience with other games’ card-collecting mode, you’ll feel right at home here. For those unfamiliar, Live’s Ultimate Team mode is essentially a card collecting and trading game. You can earn and purchase packs of cards that contain players, contracts, shoes and other items. You can also sell or purchase cards in the auction house as you look for ways to improve your team.

You start the mode with a handful of packs to get you started. After opening all of these packs, you will have your team along with some accessories. Unless you drop some real money to quickly get in-game currency, you’ll have to play some games and complete some challenges to build up your bank account. $20 will get you 2,200 coins, and a pack of cards costs around 300 coins.

To get on the court, you have a few options. You can suit up against any NBA team, as well as battle someone online head-head. There are also several in-game challenges to complete. There will be featured Live challenges that expire as new ones become available, as well as over 100 different challenges where you earn points that you can use to purchase packs of cards or the auction house.

If you are looking for some replay value outside of the career mode, given all of the issues with the Franchise mode, Ultimate Team is definitely your best bet. If you have experience with other modes like Ultimate Team, then you will likely feel like this one comes up short. But if you’re dipping your toes into the water, so to speak, you won’t know what you’re missing from other games. In that respect, Live 18’s Ultimate Team is a fine introduction to this particular mode. This right here is the bread and butter of NBA Live 18. If there is a selling point for this game, especially if you’re comparing it to the competition, it’s The One mode. It’s Live’s career mode, one that is focused equally on your time in The League and The Streets.

You start by choosing whether you want to be a guard, wing, or a big. From there, you select a unique playstyle that comes with its own unique sets of skills and traits, both of which are upgradable based on how well you play in game, and the way you answer questions in conversations with others. You start with two primary skills, with more primary and secondary skills available as you level up.

After you create your player, you play a quick Drew League game before arriving at the main menu. After playing through a few quick chapters (street games to 21), you find yourself getting drafted to the NBA and unlocking the rest of the mode, which features two unique sides: League and Streets.

The Live team clearly put more effort into the longevity of this side of The One. There is plenty here for both offline and online play. With offline comes the Pro-Am tour. Each city has a set of challenges you must complete before getting to the final challenge, with plenty of rewards to be had on your journey. For online users, you have Live Events. These will change throughout the year, and you play these co-op challenges to win unique crates throughout the year.

With the League, you guessed it: you play actual NBA games as you progress through your career. You can win awards, demand a trade, sign contracts and more. But there doesn’t appear to be much more beyond that. In that respect, The Streets seems to have far more replay value, but it’s still early. No matter which side you’re playing on, you will earn skill points, reward points and hype.

Hype – crates are locked until your hype reaches a certain level. Reach that level and you’ll be able to purchase more different types of crates.

Reward Points – can be used to purchase crates and other items.

Skill Points – use these to upgrade your primary and secondary skills.

Also, each player has a set of customizable traits. As you level up, you will eventually unlock three unique trait slots that you can apply to your player. For example, you can boost your free throw shooting, or reduce the penalty for releasing your shot late. The best part is you can change these traits before each game, and you can even assign different traits to the Street and League side of your player. This is a really cool feature, especially if you want your player to, for example, play more of a freestyle in The Streets, but more controlled The League. Again, the choice is yours.

This has been my favorite mode to play in NBA Live 18 by far. The way you go about your strategy and leveling up your character definitely gives off an RPG-like vibe. If you are looking for a reason to try NBA Live 18, The One is it.

We want to hear about your experiences with the different game modes. What do you like? What do you think needs more work? Let us know in the comments.

NBA Live 18's Gameplay is Fun, But There Are Some Key Misses
NBA Live 18: Here's What You Need to Know