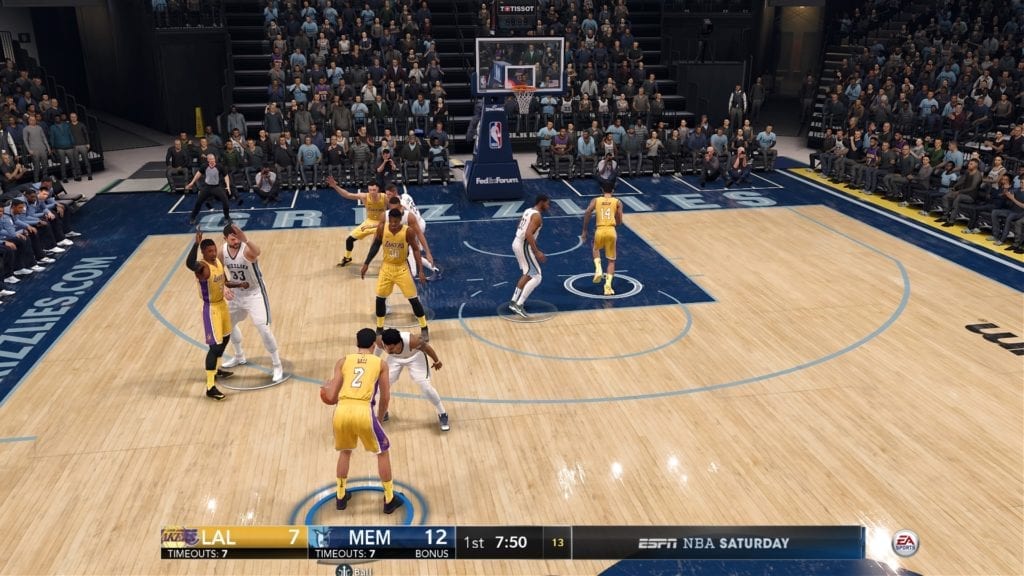 I mean, that’s the question we all have, right? Everyone has had a chance to at least play the demo by now (if they wanted), but we’re still years removed from the last full release from EA Sports, so one has to wonder: what does NBA Live feel like after all these years? Was it a mistake on EA Sports’ part to reboot the franchise? Does it feel outdated and/or broken?

If we’re being honest with ourselves, many of us were asking these same questions ever since we found out it was coming back.

I am extremely happy to report that it was not a mistake to bring this franchise back. At all.

Is this game perfect, polished, and ready to jump in the ring with the NBA 2K franchise? No, I would say not yet — it just doesn’t have enough meat on its bones quite yet. However, that was never a realistic expectation for year one, so that’s not what this is about.

So to answer the question I’ve been asking, It feels like a game that is going to be a lot of fun to play.

For purposes of full disclosure, I am a longtime avid fan of the NBA 2K series. I say this because even though I am going to do my best to avoid making this a comparison article between the two franchises, I do think it’s important for you to know my level of experience with basketball games. If you’ve never before played a basketball video game, you would absolutely have a lot of fun here. But if you’re also wondering what it’s like from the perspective of a longtime fan of basketball games, read on.

How Does It All Start?

Upon booting up the game for the first time, you are taken immediately to a Drew League game. It’s a quick exercise up to 21 which allows you to familiarize yourself with the controls. The controls are remarkably similar to the NBA 2K control scheme, so experienced gamers will feel ready to go after the Drew League game concludes.

After this game, you’ll eventually find yourself on the home screen. The layout itself is clean and easy to navigate, but I find it to be somewhat sluggish. This seems like a minor complaint, but if you’re looking to do a lot of tweaking in several different areas, it starts to add up and feel cumbersome.

Even worse is the omission of roster editing in any way, shape or form. EA will eventually push out roster updates, but leaving users no options to make edits themselves, much less download community updates, is extremely disappointing.

Injuries also can’t be toggled in quick-play games. Its a minor quibble but still somewhat frustrating.

Roster and injury issues aside, given that this is essentially a first-year release, I was pleasantly surprised to find as many customization options as I did. You can make tweaks to as many rules, settings and sliders as you see fit, which is critical in today’s market. How Well Does The Game Play?

This is perhaps the most important question to ask about the game. And the answer, of course, is complicated.  his is a first-year release, so to expect a fully polished game is to be unrealistic. But it doesn’t have to be totally polished yet. What it does need, though, is a solid base to build on for years to come. And after a few hours playing NBA Live 18, I’m really optimistic for the future of this franchise.

When I stepped onto the court for the first time, the first thing to jump out at me is how, from a distance, the game looks and feels very well rounded.

I will admit that at least a small part of me expected the worst when EA decided to reboot the franchise. I was prepared for a year-one disaster followed by some steady improvements the following years. And while there are absolutely a large number of important items missing from the game, what is here gameplay-wise is really impressive.

Player movement is very responsive. I definitely feel in control of my player and the ball overall. I do get stuck into canned animations a bit too much at points when trying to move back and forth or side to side — it can sometimes feel like I am being pulled between two big rubber bands — but in general it’s an input-driven gameplay system that makes sense.

I fully admit that perhaps my issue with the canned animations could magnify over time, but I felt myself getting somewhat used to them and “playing around them” so to speak as time wore on.  Regardless, everything from the cutting and rebounding to the passing and shooting feels very natural.

I do think players on a larger scale are a little too similar to each other. This isn’t to say that running the court with Steven Adams feels the same as it does with John Wall; you can absolutely notice that difference. But driving to the hoop with PG-13 and Trevor Ariza doesn’t feel as different as I’d like it to.

To put it another way, I feel the difference between Westbrook and Backup Point Guard X, but the extremes are where the clear differences are noticeable more than with players who are maybe only a tier apart from each other on the skill tree.

Another area that needs some work is post play. Post defense feels fine for what it is, but throwing the rock down low to your big man doesn’t feel as realistic as, say, watching your SG cut through the lane to break open for a three point bomb. This is a perimeter-driven game where you have far more control and depth of choice when your back is not to the hoop. Post play tends to be clunky and robotic, while the mid-range and three-point game has a more natural feel.

Using the right stick to control your dribble, use the hesitation, and cross your man up is a lot of fun. It doesn’t feel as responsive as it could once it’s perfected, but the inputs make sense and feel one to one in terms of your movement on the stick relating to an action on the screen.

On the whole, I have been pleasantly surprised with how well it works. I was able to juke and find an opening through the lane on many occasions. It’s pretty impressive, again, for a first-year release.

The biggest reported bug is the auto subs on/off toggle. You would like turning this off would affect only your subs, but it apparently affects the computer as well, which means you can either have the computer sub for both teams or nobody gets to sub, period. There is an apparent workaround, and I will definitely look at this issue more closely as I get more time with the game.

I spent some time with the the Ultimate Team and The One, but I’ll save those thoughts for the coming days. For the time being, I’m focusing on getting reacquainted with NBA Live. And I’m having a really great time doing so.

If you told me weeks ago that I would enjoy playing the new NBA Live, I’d have been skeptical — at best. But after just a few hours, NBA Live has me really excited for the future. And that can only mean great things for fans of basketball video games.

How are you guys enjoying NBA Live 18 so far? What are some of the things you find yourself enjoying? Where do you think improvements are needed the most? Let us know in the comments!