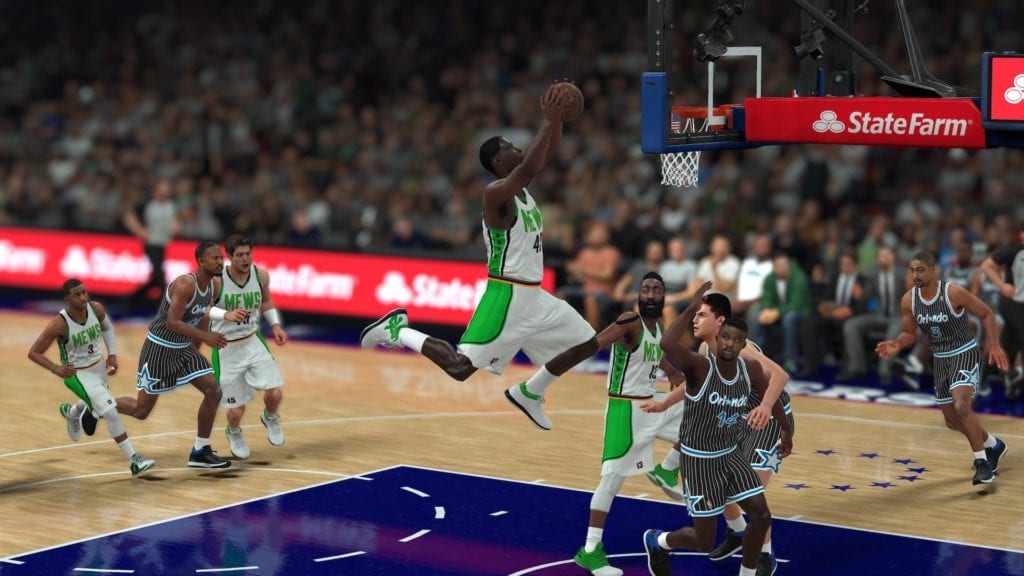 Five weeks into MyTeam, and the cards are starting to pile up. Sometimes while putting a lineup together, I’ll come across a player I totally forgot I had and decide to build a squad around him. It’s a fun problem to have. Though for big games like Domination where efficiency is key, I have a few go-to-guys that I know I can always rely on…

But I’ll discuss that a little later. Let’s get some business out of the way first, like the brand spanking new Moments Challenges. 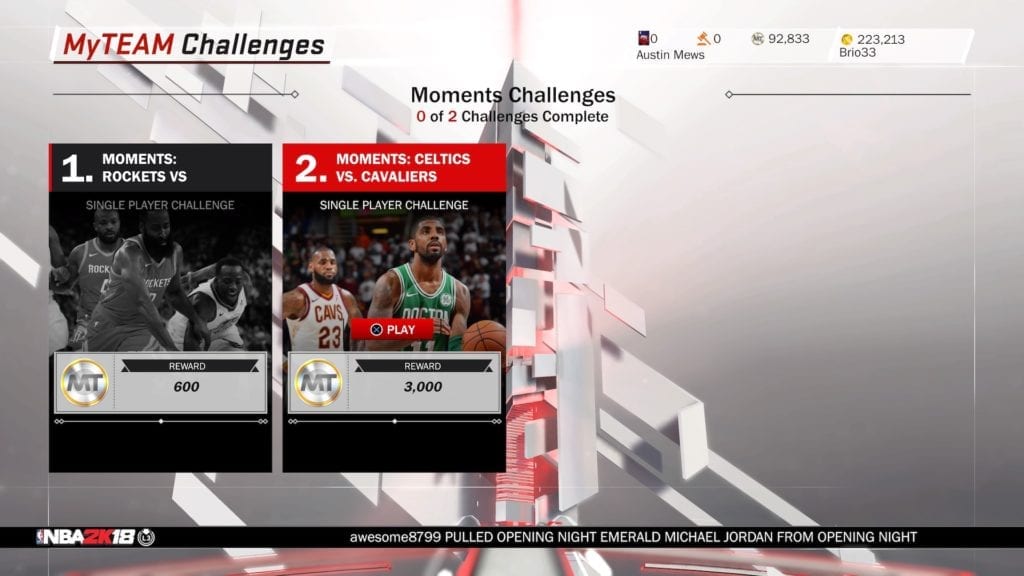 There’s only two, based on this year’s opening night games, but that second challenge nets you 3,000 MT!

We also are (finally) getting our first Moments Cards of the season. There’s some cool players in there that I want, but I worry these cards will lose their value quickly. (Except for the Lonzo Ball, which will probably be the most overpriced card ever.) I probably won’t buy any actual packs of these, but will instead just wait and cherry pick the auction house. Also, I guess regular League Packs have been removed and replaced by Moments Packs? Interesting…

Then the new batch of Throwback Thursday cards features a ruby Ray Allen. I was wrong earlier, this will be the most overpriced card ever: 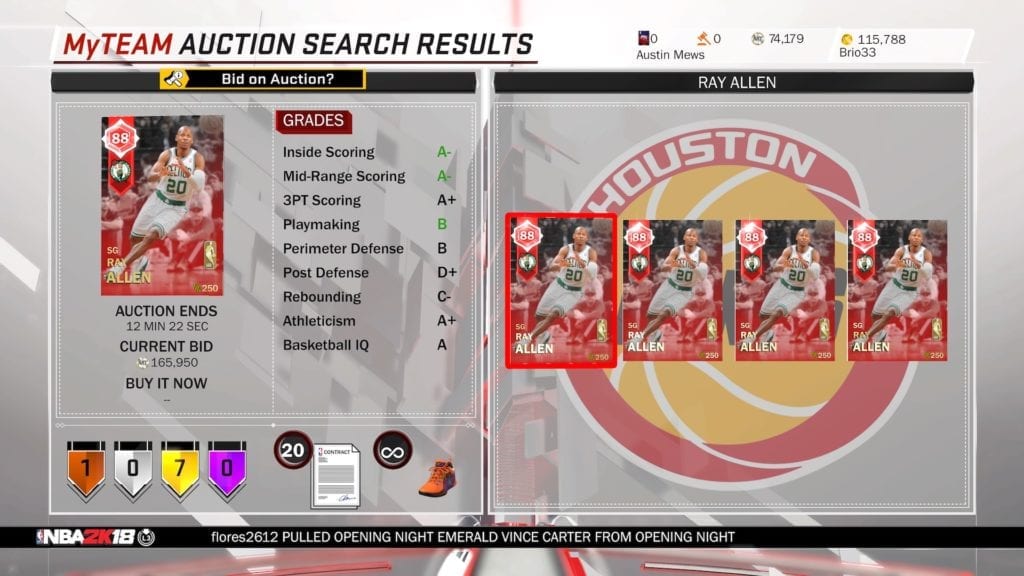 I’m guessing that’s because of his 3-point rating (97 for open shots, 93 for contested shots) and his plethora of gold shooting badges. Personally, I’m a Steve Francis fan and am going to try and get my hands on his new Magic card, but beyond that, I’ll be saving my MT for another day.

That day wasn’t Tuesday, when the new new League Leaders packs dropped. Basically each card features a player who led the league in a statistical category, with the collection goal being a ruby Baron Davis (who led the league in steals apparently).There’s only like a dozen other Baron Davis cards that can be acquired this year, so I’m not super excited about this collection either. Personally I’m just waiting for historic players to become available that I need to complete collections — I’m pretty close with the Jazz and the Sonics, like less than four cards each. So c’mon 2K, let’s get those missing players out in the world.

Finally, there is a new set called Signature Series. 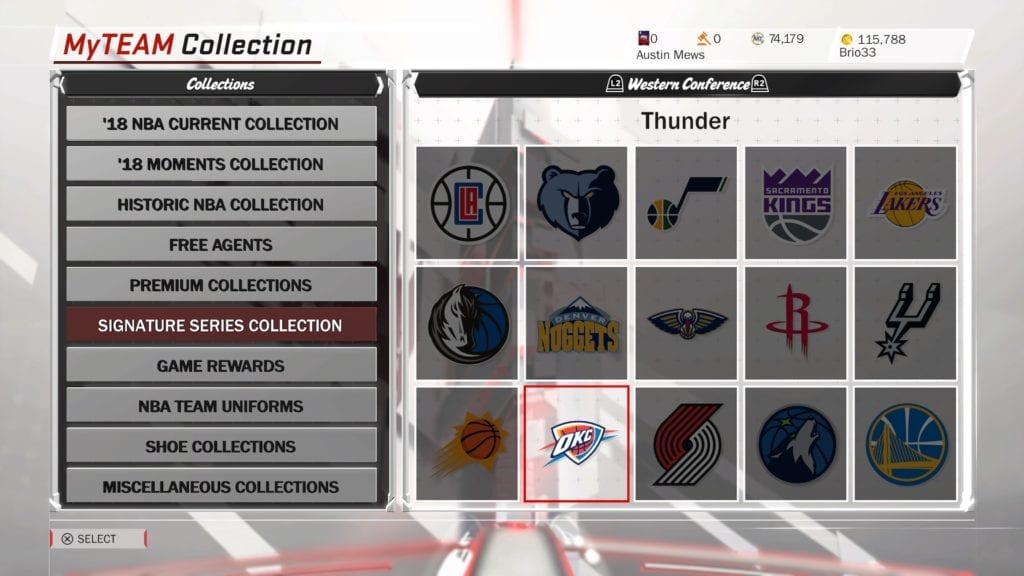 I never noticed this in the Collections Menu before, but the only player available right now is an emerald Carmelo Anthony so I guess there’s not much to see yet. He looks spiffy in his OKC jersey though.

Okay, everyone loves a good list, and Week 5 seems like a grand time to unveil my Top 5 go-to-guys (so far). **In announcer voice** At guard, standing 6 feet tall from Wake Forest university—

1. Chriiiiiiiis Paul! (83) Chris can be utilized in just about any system and is a point guard in the truest sense. Whether it’s the pick and roll heavy Perimeter Centric system, or the run-and-gun insanity of Seven Seconds, he’s consistent and efficient. When I need a victory, I know I can put my faith in the Point God.

2. Cuttino Mobley (88) has earned the right to be my starting shooting guard. He plays decent defense and is athletic, but the main reason I use him is that I’ve really gotten good at his shot release. At first I couldn’t hit anything with him, but now I’m deadly. And the best piece of advice I could ever give regarding NBA 2K, is to use players you’re comfortable with, no matter the ratings.

3. Ron Artest (91) is kind of a no-brainer since he’s my only amethyst right now, but I truly can’t imagine playing without him. I’ll match him up against Steph, MJ or even LeBron and he’ll lock them all down. Plus he can hit open shots and finish at the basket. Total beast.

4. Kevin Willis (88) is a man among boys. He gets all the rebounds, can dunk like a boss and holds his own in the post against anyone. Speaking of the post, the guy has a wickedly consistent hook shot. A really impressive ruby for sure.

5. Dwight Howard (79) was one of the first cards I bought in the auction house, and he’s been my starting Seven Seconds center ever since. What’s been really working for me lately is pairing Dwight with a stretch four like Jabari Parker or Thaddeus Young in my starting lineup, and bringing Kevin Willis and a center who can shoot (like Raef Lafrentz) off the bench. Then when it’s crunch time and I’m trying to hold onto a lead, I’ll put Dwight and Kevin in at the same time, and the paint is basically off-limits. 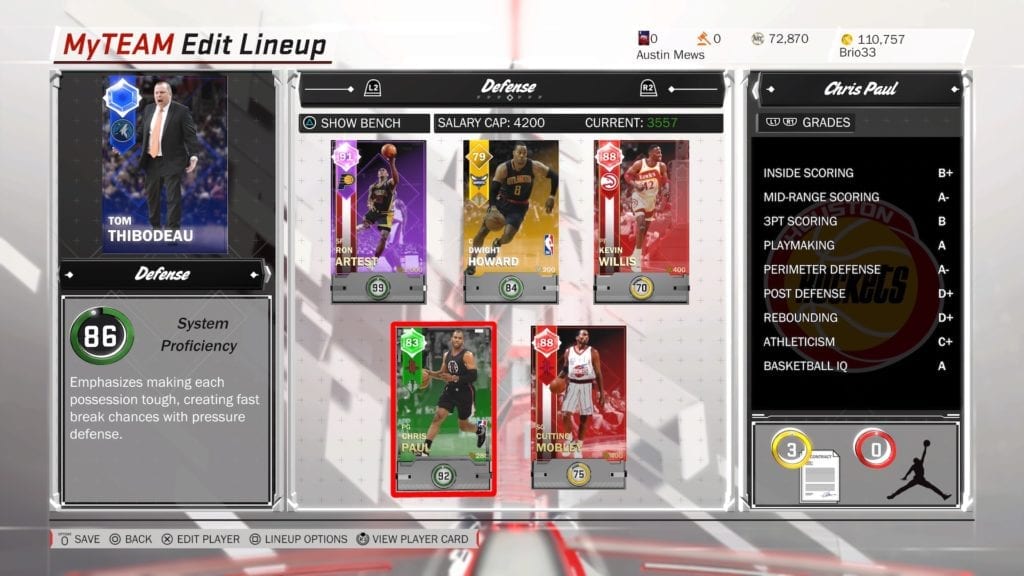 Anyone know what these players have in common? I’ll give you a hint: the System Proficiency above is Defense, but like I said earlier, I  run a lot of Seven Seconds…

Who are your favorite go-to-guys?