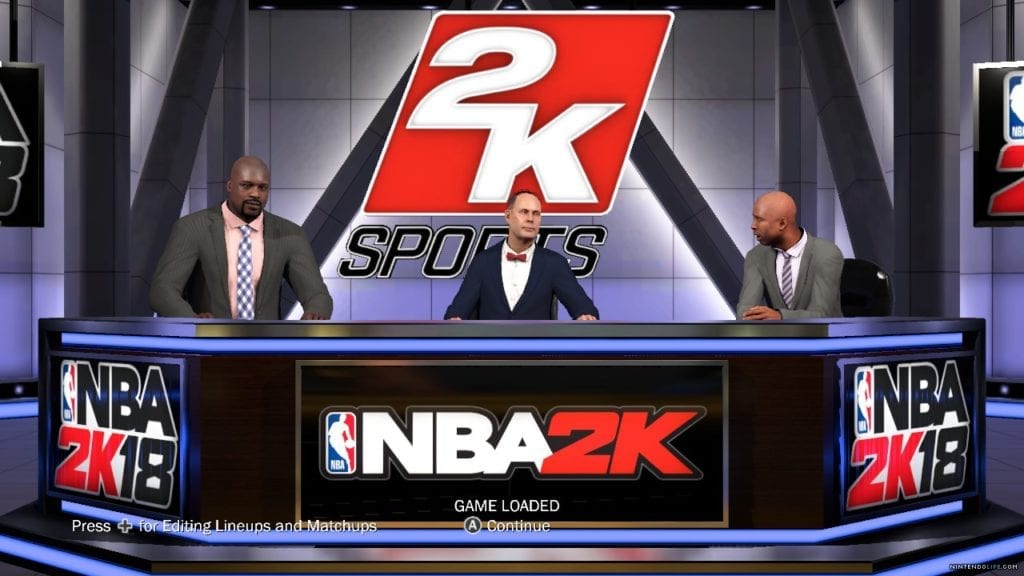 Nintendo hasn’t been known for AAA releases of any sort outside of their own in-house Mario/Zelda releases. The Switch seems to be changing this formula and major releases are coming out on the system, albeit sometimes stripped-down versions of them to work on the hardware. NBA 2K18, which battles the FIFA series for sports gaming sales supremacy, has done just that with its release on the Switch. How does it fair compared to its big cousins on the PS4/Xbox One, let’s dive in and find out.

Getting to the elephant in the room, yes the game takes up a ton of space on the Switch and requires an SD card. When it’s all said and done (without any future patches yet), the game weighs in at 26 GB with one profile save present on console. The internal memory after the OS has the Switch at 25 GB, so don’t even consider the game without an SD card. The retail release also requires the SD card for reasons I can’t answer at this time. As for the game itself, the Switch shockingly gets 99 percent of the full PS4/XB1 release here. There’s some things missing, but all in all, this is the console release of NBA 2K18 on a mobile device. They could have skimped and released a modified version of the mobile game, but they didn’t and I commend them for that. That’s not without saying that 2K cut one corner to make it all work, the game runs at 30 frames per second. A majority of (if not all) sports games run at 60 FPS, so this is jarring on paper, but not as much on the game itself.  NBA 2K18 runs at 720p undocked and looks gorgeous in handheld mode. I didn’t notice any frame rate issues at all here. When the console is docked, it runs at 1080p and takes a hit graphically. The game looks a tad blurry/fuzzy on a bigger TV. If I sit a little further away than my normal 3-4 feet, it begins to look better. I also picked up on the frame rate more here, especially on fast breaks and quick moving action. Deal breaker? Not at all. Replays and close-up action still look fantastic. The individual players look great as well, and I’ve not seen anything that made me think it looks bad in anyway.

One other issue I’ve encountered is that the audio seems to have a popping sound. It also seems to be out of sync in MyCareer mode. In MyCareer it gets so out of sync that I’ve had scenes were my character was finished talking but the on-screen avatar was still sitting there with mouth moving looking around in dead silence for 20-30 seconds. Overall though, the audio is great. All the music, commentary (including Kobe Bryant and Kevin Garnett) are in the game. The arena sounds alive and crowd sounds great. The Neighborhood is a Ghost Town

The MyCareer mode as a whole feels like they could have been left out of the Switch version. I’ve never seen full courts in the Neighborhood like I’ve seen on PS4. Granted, there’s always a game to be found for your player, but it’s pretty barren overall. Usually two of the eight courts have players on them at any given time, where PS4/XB1 would have every single court full, including people waiting. With the portability of the console and the need for online with this mode, they could have scrapped it and very few would even miss it. Although, the issue is it would cut into the VC side of things and I’m not sure how that would sit. Another oddity is the few things that are missing from the game are just blanked out in this version. For example, in MyGM expansion mode, you cannot download logos or created teams like you can on PS4/XB1. So the box where those options normally would be are just blanked out. It is an odd aesthetic to see on screen because it just feels edited out instead of actual work done on the Switch version to make it feel different.

I’ve tried the game with the Pro Controller and Joy Cons, both work fine with docked and undocked. I preferred the Pro Controller due to its Xbox-type configuration, just having to re-learn my brain to understand that Microsoft switched the staple Nintendo Y/X and B/A buttons many years ago. All in all, it’s a monumental achievement to have this game running on the Nintendo Switch. It’s truly a full console game for a mobile device with almost every bell and whistle in the other versions. It looks great, plays great and is a step in the right direction for AAA games on a Nintendo console. Highly recommended.