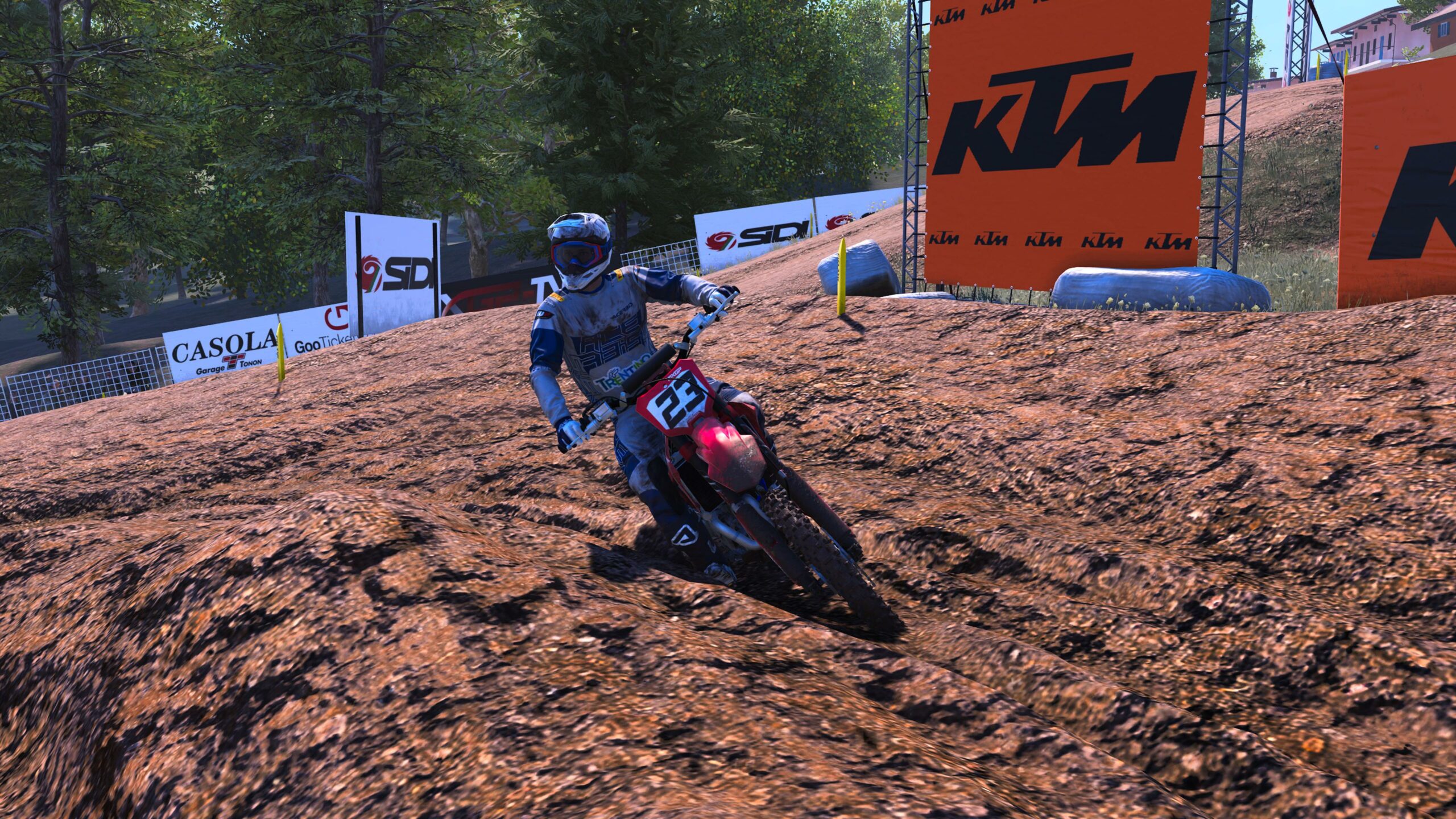 The MXGP series from Milestone has been a favorite of mine since its inception back in 2014 with MXGP: The Official Video Game. But even as a favorite of mine, I am not blind to some of the issues, and the inability or unwillingness for Milestone to make major improvements on a yearly basis.

With the MXGP franchise, it has always been about small steps forward, and occasionally a step or two back. Some years the release has been well received by both fans and media, and other times both sides of that coin have been against some changes. 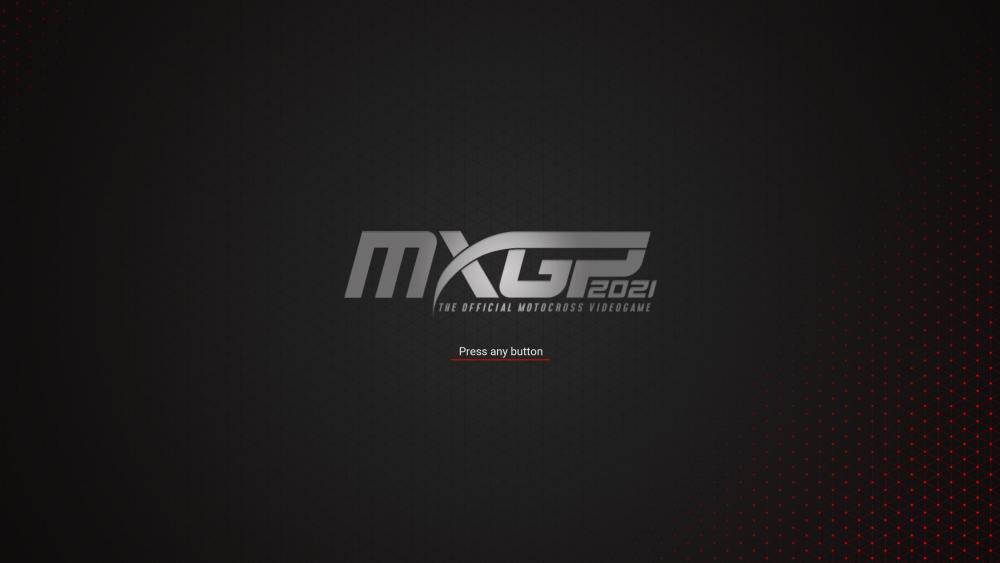 According to Milestone, quite a bit has either been improved, revamped, or newly added in MXPGP 2021. That’s always exciting to hear, both as a fan of the series and as a reviewer. Sadly, the pre-release hype doesn’t always match the actual release itself, and fans are left feeling like they were taken or misled.

So here is what was hyped ahead of time:

Official Championship 2021 – All the tracks, all the riders, all the official bikes to fully experience the true emotions of this season. All of them, from the last corner to the first position.

New Career Mode – Your race to become number 1 will be even more realistic and exciting. A renovated career path where your every decision will be crucial. Choose between official or custom teams, work your way through contracts and sponsors.

Legacy Tracks – Relive the emotions of Ottobiano, Ernée, Leon, and Agueda: 4 of the most celebrated tracks of past editions. History is ready to be rewritten…and become a legend.

Waypoint Mode – Place your waypoints in the new compound and share your tracks online.

With that in mind, let’s get into my MXGP 2021 review and chat about some of these items (and more).

For me, the improvements that I witnessed, felt, and enjoyed in MXGP 2021 start and end with the on-track experience. Although Milestone has been reluctant to add sweeping changes year-to-year, the developers have always felt very comfortable changing the racing model and physics — and this year’s version is no different.

The minute I released the clutch for the first time, I noticed the difference both in weight and experience. 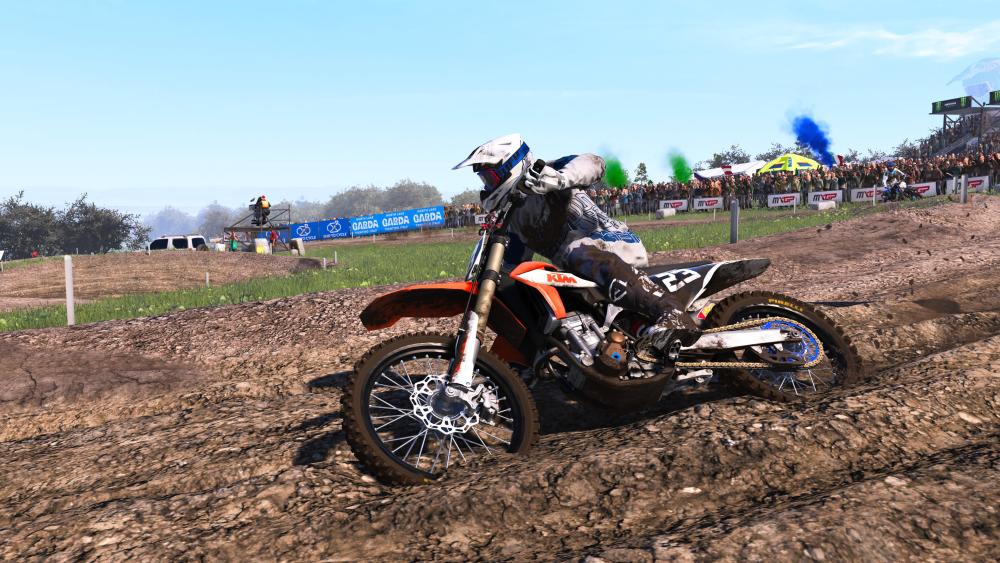 The bike just feels heavier, and that goes for both the 250 and 450 versions in-game. One of my biggest complaints over the last few years was the bike, regardless of which one, felt feather-light and somewhat difficult to control in a realistic fashion.

With the improvements this year, those complaints have been eradicated as there is a noticeable difference from the last few versions in the physics, weight, and handling departments. These things helped me enjoy the game on a much deeper level. 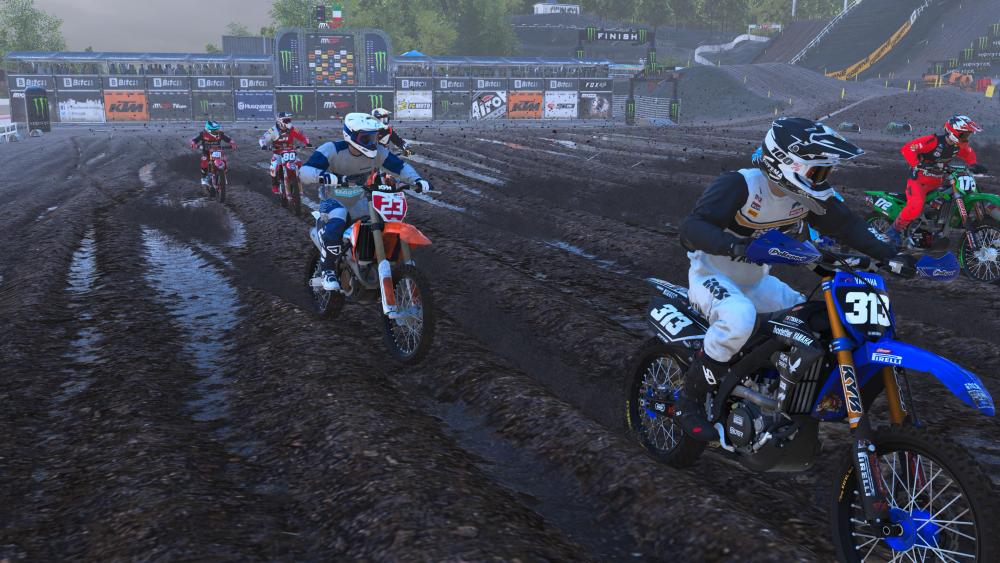 The weight of the bike is probably the biggest improvement for me in MXGP 2021. The newly implemented bike weight really evened out the handling of the bike, especially during my attempts at an S-curve, or shooting off a rut coming out of a standard turn.

The weight is so well dispersed throughout the bike it created a realistic feel and made me feel like I was on the bike. That’s a very difficult accomplishment to pull off and deliver for a developer, but Milestone really did its homework here and nailed the feeling. 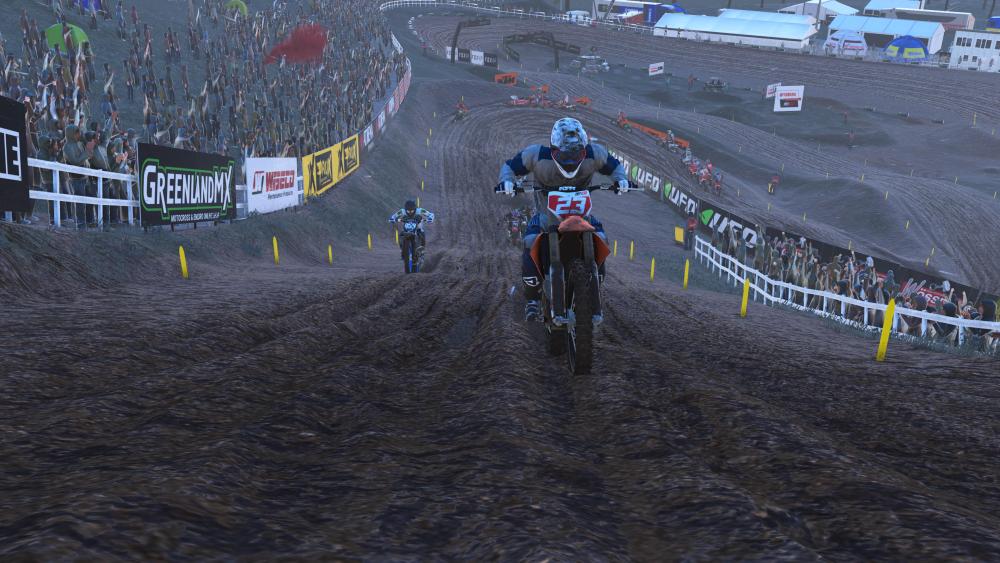 Not only does the weight have an impact during bends and turns, but it comes into play both with bumping up against your opponents and landing those big jumps with accuracy and control. The physics and weight improvements were also incredibly helpful while attacking the deep berms, especially during inclement weather.

The one caveat to all of this is the fact that I did have to teach myself how to ride and control my bike in all aspects again while on the track. It didn’t take long though, and once I achieved that, it carried over to the rest of my experience from there on out.

The MXGP series has always been a solid-looking game when it comes to the graphical side of things, so the fact that this year’s game looks better on the new systems is no surprise.

Although the improvement may be expected, it doesn’t mean it isn’t appreciated. From the tracks and even the track-side environment, the game looks as good as ever and is littered with sharp-looking details that look organic to the setting. 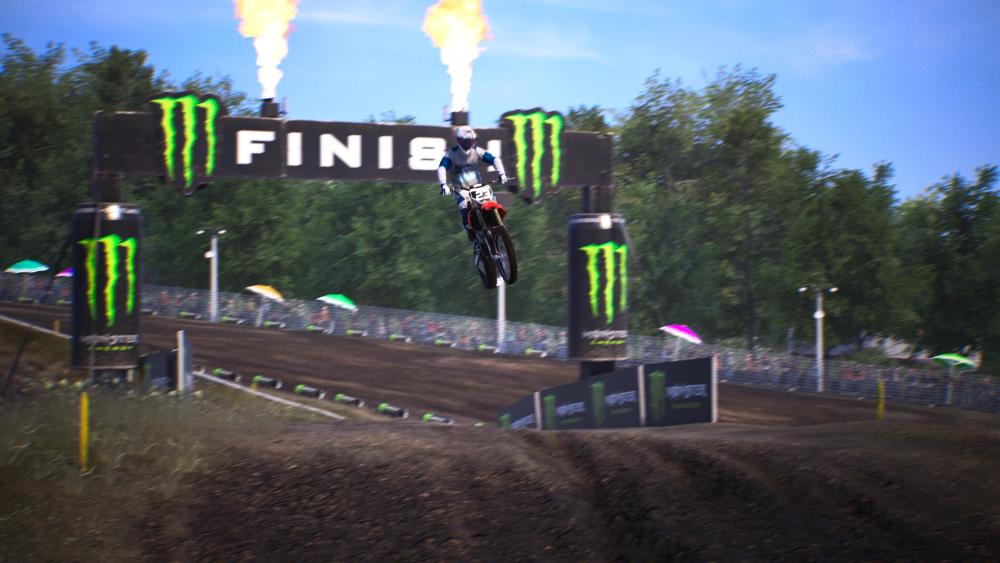 Whether it’s the crowds that cheer, the camera pods that move to catch the action, or even the safety crew sitting near the track, the game runs well and looks great with zero signs of graphical inconsistencies.

The improved graphics really shine during bad weather as you can see the track starting to deform, puddles gradually turning into mini-lakes, and mud and debris flying everywhere.

The track creator suite found in MXGP 2021 is as intuitive and smart as a creation program can be. It simply doesn’t matter if you have years of experience or are brand new to it, there is a ton of fun here and the ability to unleash your creativity is addicting. 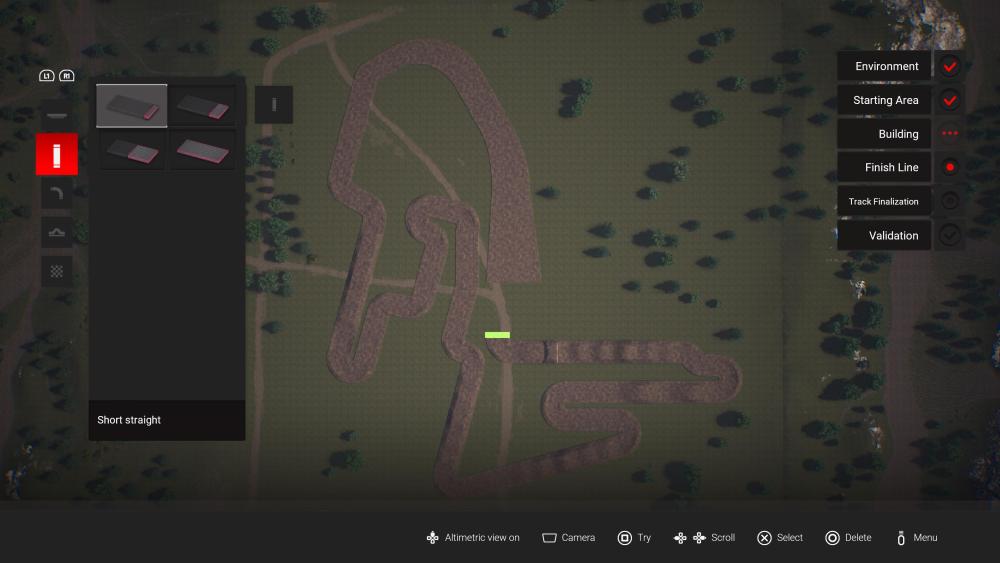 The addition of the new tools definitely helps, but the ease of use creates the ability for anyone to jump in and build away. You can also test throughout the process to help with the minutia of your creation.

For those who are not aware, not only can you build and enjoy your tracks offline by yourself, but the game also gives people the chance to upload their tracks for the community to enjoy. 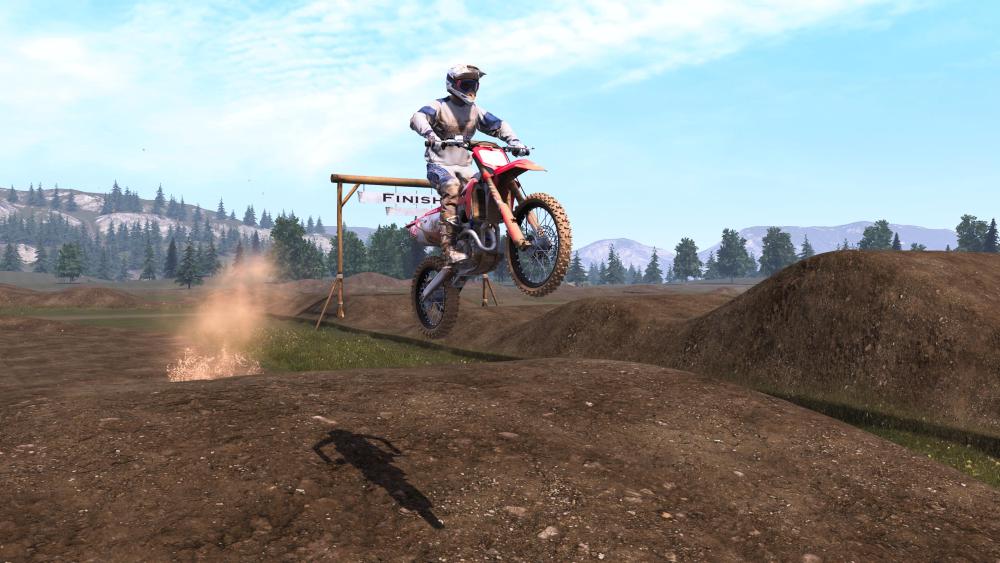 The new tools and options are a nice addition, but the track creator feels very familiar and easy to use. Besides, when you have something that works as well as this does, there is no need to tear it down and reconstruct it just to say you did it.

This is something that I have harped on year after year with this series and will continue to do so until the presentation package adds to the overall immersion. As I mentioned, the game looks beautiful and runs incredibly well on the PS5, but the presentation package consists of a quick overlook of the track(s), and the podium finish is a simple splash screen that showed my rider with a certificate acknowledging my positional finish. 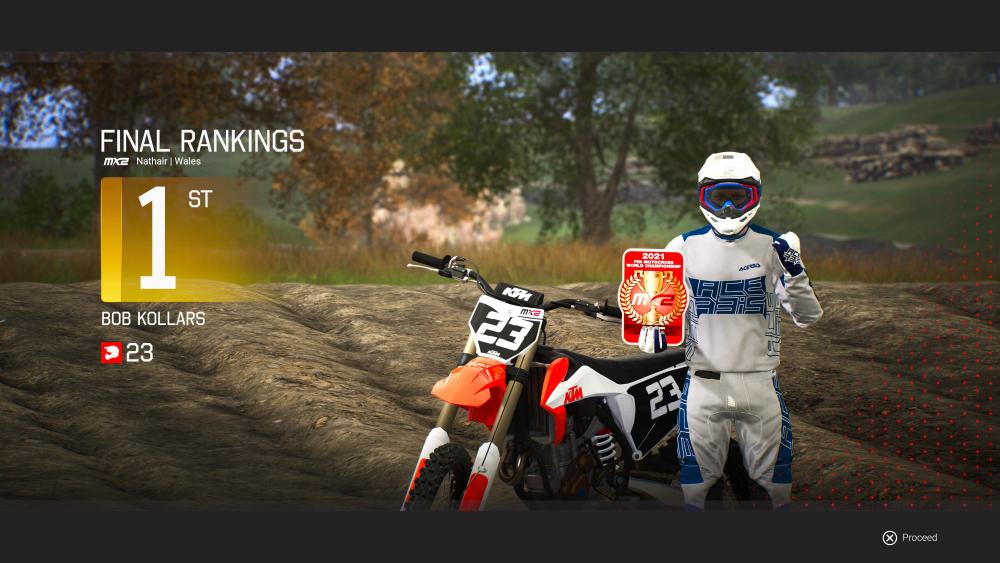 Even after winning the MXGP2 series and qualifying to move up, the presentation was still a simple splash screen showing my accomplishment.

I understand that Milestone is not a massive developer with unlimited funds, and I would rather the developers focus on gameplay. That said, at some point the presentation needs a bit of love because this is an officially licensed title and deserves to see attention in all areas and aspects. 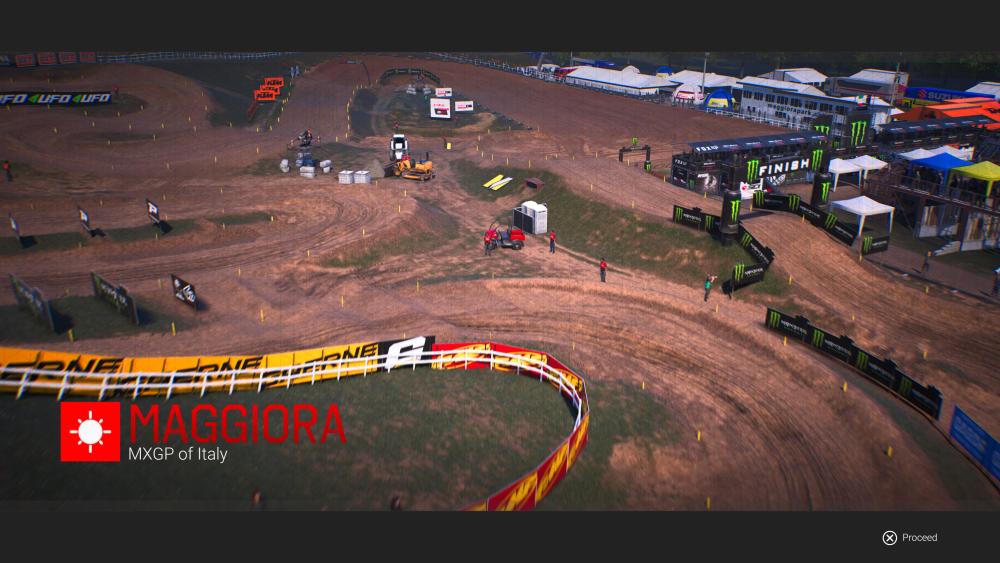 Although I have spent much of this review speaking highly of the new and improved physics and bike controls, it’s not a perfect system. As I mentioned before, I am a veteran of this series and am aware of the issues that have held it back a bit from one year to the next. 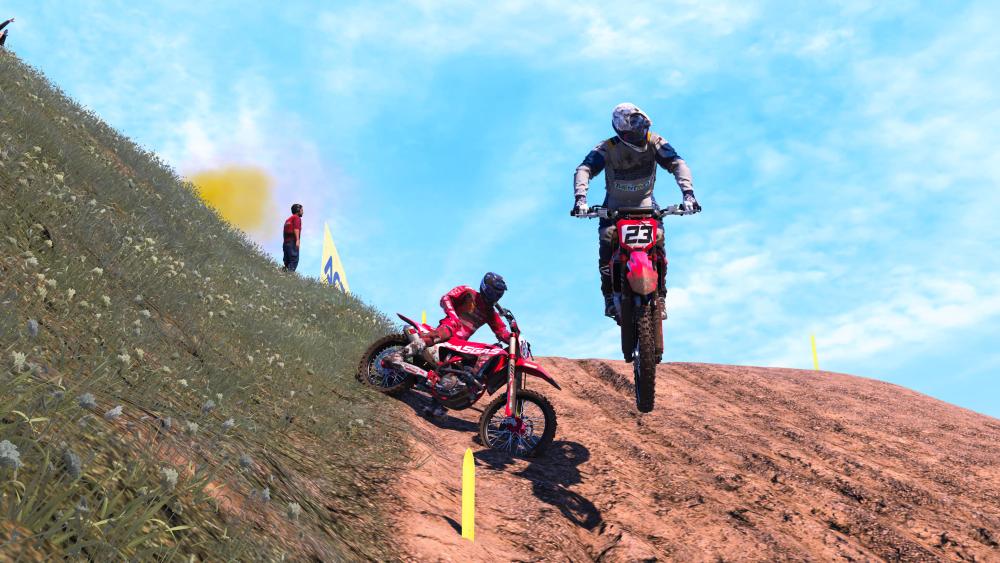 This year is no different as I did experience landing on top of opponents again and riding their shoulders for a second or two. Riders do occasionally collide with each other on the descent from a jump, but in all my years I have never witnessed one rider landing on another rider’s shoulders and there not being a disaster that follows.

In MXGP 2021, the infamous “riding the opponent” physics popped up just enough to be annoying, but nothing like it was a few years back. Regardless, it does decrease the realism and can be annoying when it happens at an important moment during the race. 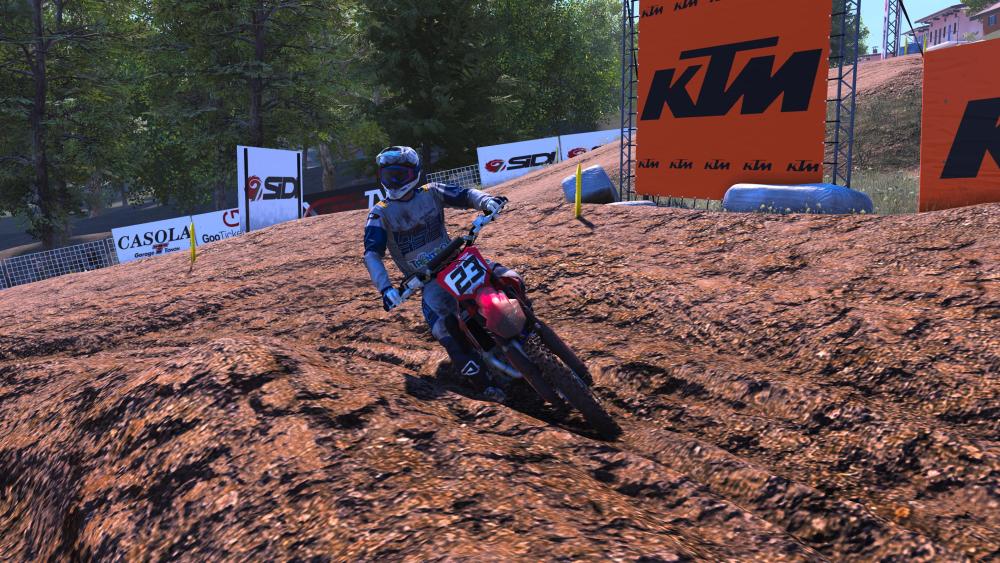 One other familiar issue that popped up involves the occasional wonky physics when cornering on a berm or shooting out of a rut. While not nearly as bad as some offerings in the past, the physics issue can be a pain when it happens during a heated stretch of the race with opponents around fighting for a podium finish.

As I mentioned, none of these issues are as bad as they have been — and only caused an issue for me a few times throughout the review — but they happened and need to be mentioned.

While Milestone may tout legacy tracks, a new career mode (which didn’t feel that new), and Waypoint mode, the shining stars of MXGP 2021 are the new bike mechanics and track creator.

The improved handling and new weight of your bike are enough for me to recommend this game to both hardcore fans and people who are looking to just pick it up and have some fun. This title delivers some true “staying power” and is one that can be played six days or six months from now.

The game offers a hefty set of options for both online and offline players, and the online portion is as solid as ever. If you are like me and most of your time will be spent on the track in career mode or online racing against friends, then adding MXGP 2021 to your rotation is simply a must. The game still has a few legacy issues, but the positives far outweigh the negatives when it comes to MXGP 2021.