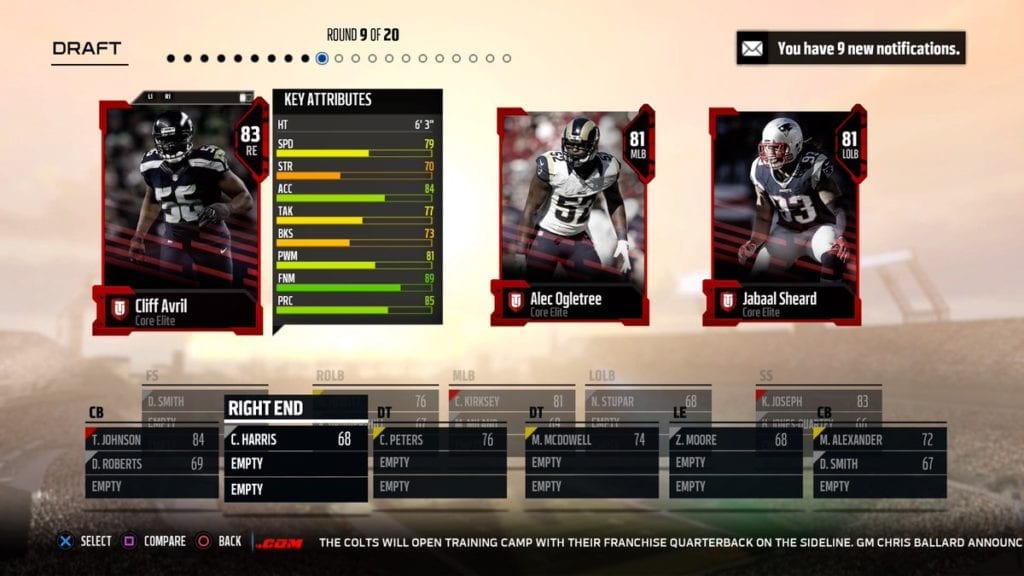 When it comes to online competitive modes in Madden 18, there is no shortage of options to choose from to get your football fix. Madden Ultimate Team has solo challenges, ranked head to head, and many other ways for players to hit the gridiron with friends or strangers. One of these modes returns from Madden 17 and has been given a shiny new name, but misses the boat on becoming a valuable gateway to introduce new players to the daunting and dense content of Madden Ultimate Team: MUT Drafts 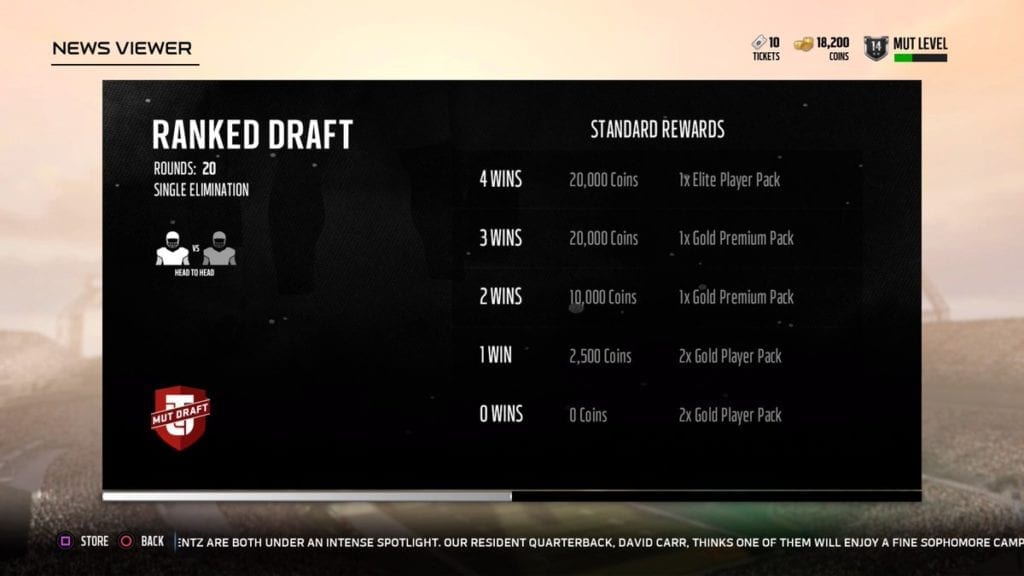 What Is MUT Draft?

MUT Draft is a mode in which a player gets a base-level team generated by the CPU. They are then thrust into a 20-round fantasy draft where each round consists of choosing a player from a group of three. The positions in each round are at random, but typically the three players are in some way connected by where they line up on the field. Ratings also vary, but the draft-eligible players are the ones that make up the bulk of your playmakers and talent.

At the end of the draft, you play head to head against another user who is also fielding a drafted team. It carries with it some pretty valuable MUT rewards for winning each of the head to head games. If you win four games in a row, you’ll end up with 52,500 MUT coins and multiple player packs culminating in an elite player pack after the fourth win. MUT Draft ranked is single elimination though and costs five tickets to enter. Therein lies the problem with this mode.

I’ve Got A Golden Ticket — Or Maybe Not

Upon entering MUT for the first time, one of the things players are gifted with is tickets for entering MUT Drafts. With the 10 tickets awarded, you will be able to play MUT Drafts twice total before needing to get more tickets. These tickets cannot be earned from any challenges or by playing the game. Instead, players must spend 15K coins or 300 points, real world money, to be able to buy enough tickets for one more MUT Draft run. 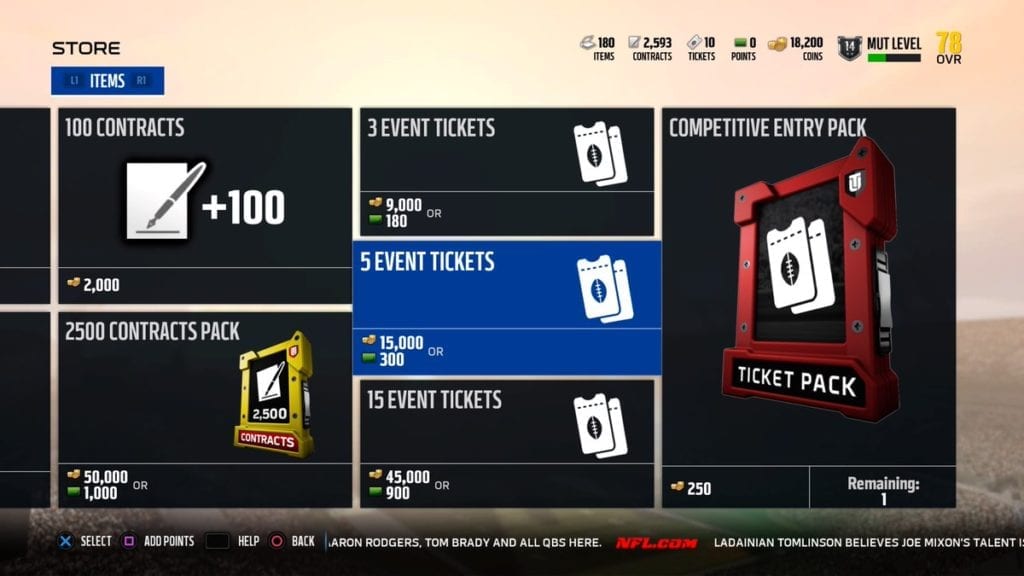 The cost of entry is unfortunately steep for a mode that is perfect for introducing new players to Madden Ultimate Team. MUT is already a potentially expensive proposition, and it’s no secret that EA makes a tidy profit on what is one of Madden’s most played modes.

MUT Drafts is at its strongest where variety is concerned. Due to the randomly generated players that show up during the draft, no two teams are ever the same. Each experience is unique and allows MUT Drafts to stay fresh because of it. Players new to MUT can also try out cards without having to buy them in the auction house or cross their fingers to get them in packs. It also allows for players to get a true feel for the meta of Madden 18’s head to head scene as each drafted team is usually good enough to accurately reflect how the game is meant to be played.

Discovering a play style that fits Madden 18’s gameplay strengths and weaknesses can help determine which players to shoot for in ranked MUT — and when building your Ultimate Team. Knowing which way you want to go is beneficial in narrowing down the nearly endless sea of player cards to only those players that fit the desired scheme. This makes MUT Drafts a great way to introduce players to MUT without overwhelming them.

Where MUT Draft Drops The Ball

With MUT Drafts being such a valuable introductory tool, it doesn’t make sense to have it locked away behind a ticket system to play other players. Sure, playing a MUT Draft against the CPU doesn’t cost any tickets if you choose the Open Draft option, but playing the CPU doesn’t accurately reflect the current meta in Madden’s ever evolving competitive scene. AI plays entirely differently from the typical user, and going into a head to head game using strategies learned from beating up on the CPU is a recipe for disaster. In addition to that, the Solo Draft against the CPU surprisingly also costs five tickets to play. Even if EA wanted to justify a ticket system for user head to head in MUT Drafts, having any CPU draft mode have a cost of entry is unacceptable. 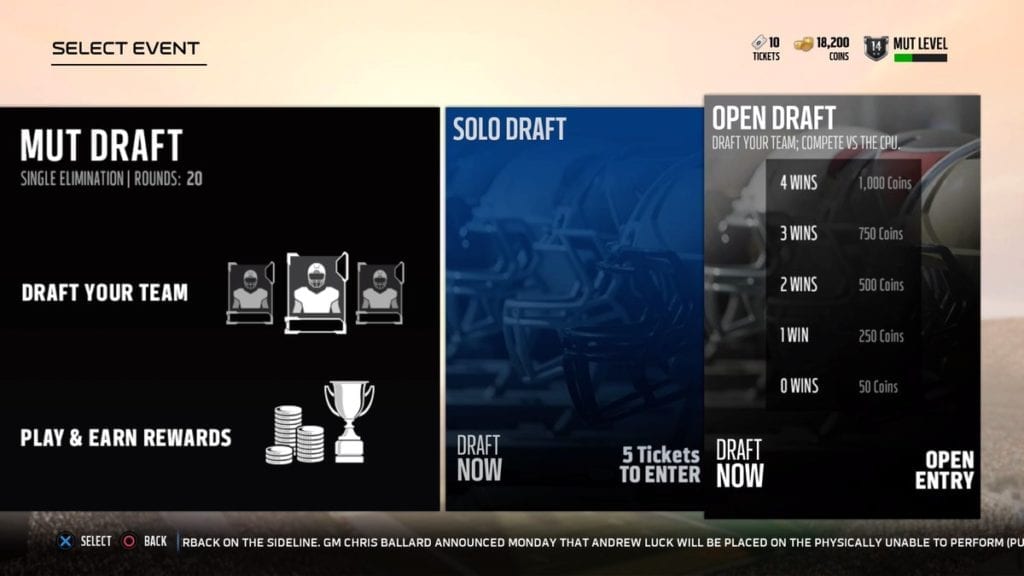 How Can MUT Drafts Be Improved

As it currently stands, MUT Drafts is a mode that will be interesting to play a few times, but ultimately one that won’t add many new users to the MUT player base. EA should consider sacrificing the small amount of money they can make in this mode and make it completely barrier free to play against another user. It’s such a fun and useful way to get a grip on how to play MUT and would actually lead to players potentially buying more packs and points in MUT’s more meaty areas. As a trade off, the rewards for winning could be lessened slightly without turning users off from playing it.

EA should also do a better job of putting MUT Drafts front and center on the main game page. The tag line for MUT Drafts on the tile is, “Try out some of the best players in Ultimate Team” but that is where the advertising for MUT Drafts ends. Making more of an effort to bring MUT Drafts to the attention of Madden players seems to be something that is an afterthought to EA, which is a shame since MUT Drafts is a gem of a mode.

MUT Drafts has all the potential in the world to get many more users into Madden Ultimate Team, but until EA treats it as more than a secondary part of Ultimate Team, MUT Drafts will remain as yet another blown opportunity for Madden.