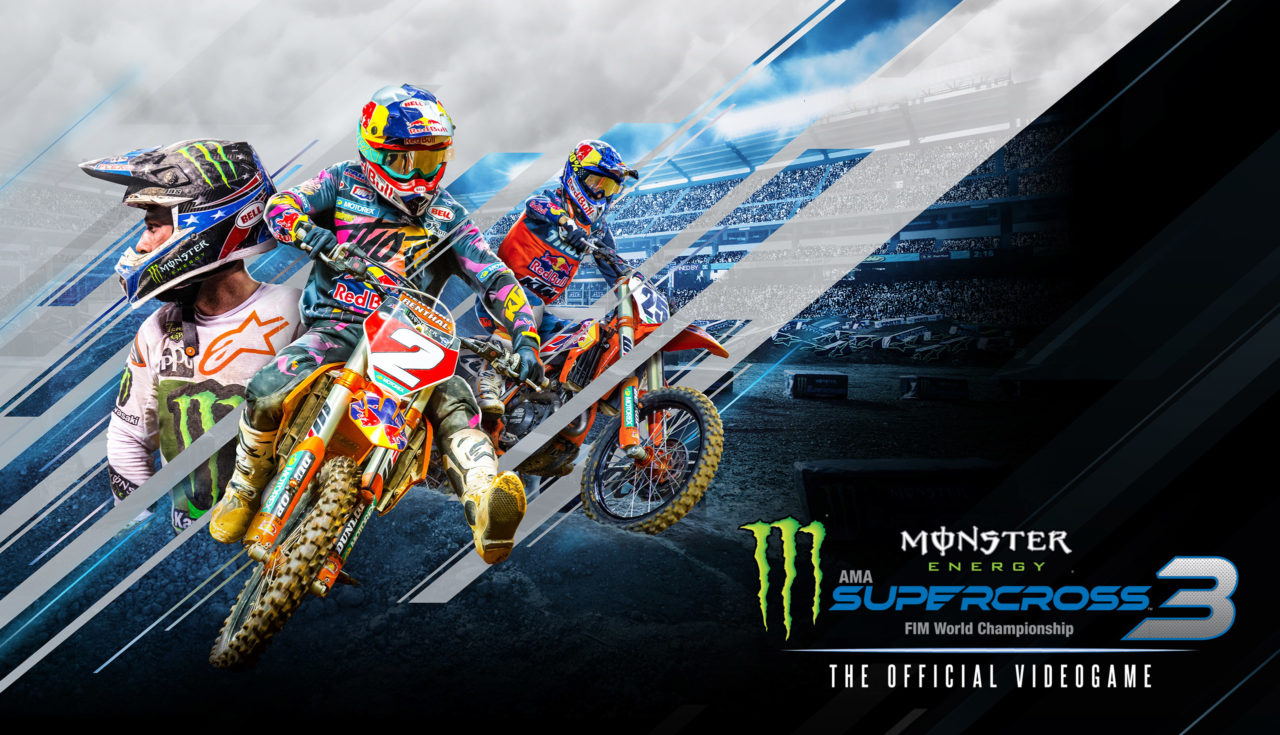 It has been an exciting time over the last 36 months or so if you a fan of the racing genre. The category has been filled with some entertaining and challenging titles, and many would consider Milestone to be a considerable part of the resurgence of the racing genre. With series like MXGP, MotoGP, RIDE and Monster Energy Supercross, Milestone is putting in the work. This of course brings us to Monster Energy Supercross 3.

The first two installments in the series were building blocks, but many have been hoping MESC 3 really puts it all together. Well, at least as it relates to gameplay, Milestone has really nailed it. Let’s get to the review.

If you have played any of the previous versions of the Monster Energy Supercross series, then you will feel right at home with this year’s offering. If you haven’t, no worries as the game provides plenty of tutorials for even the most novice fans.

In the MESC 3 career mode, you will start in the “compound” and try to impress the official teams in an upcoming showcase. From here, the hope is that someone will see something in you and your abilities. It’s not that hard as the AI seems a bit relaxed for the showcase, but doing your best is still paramount. 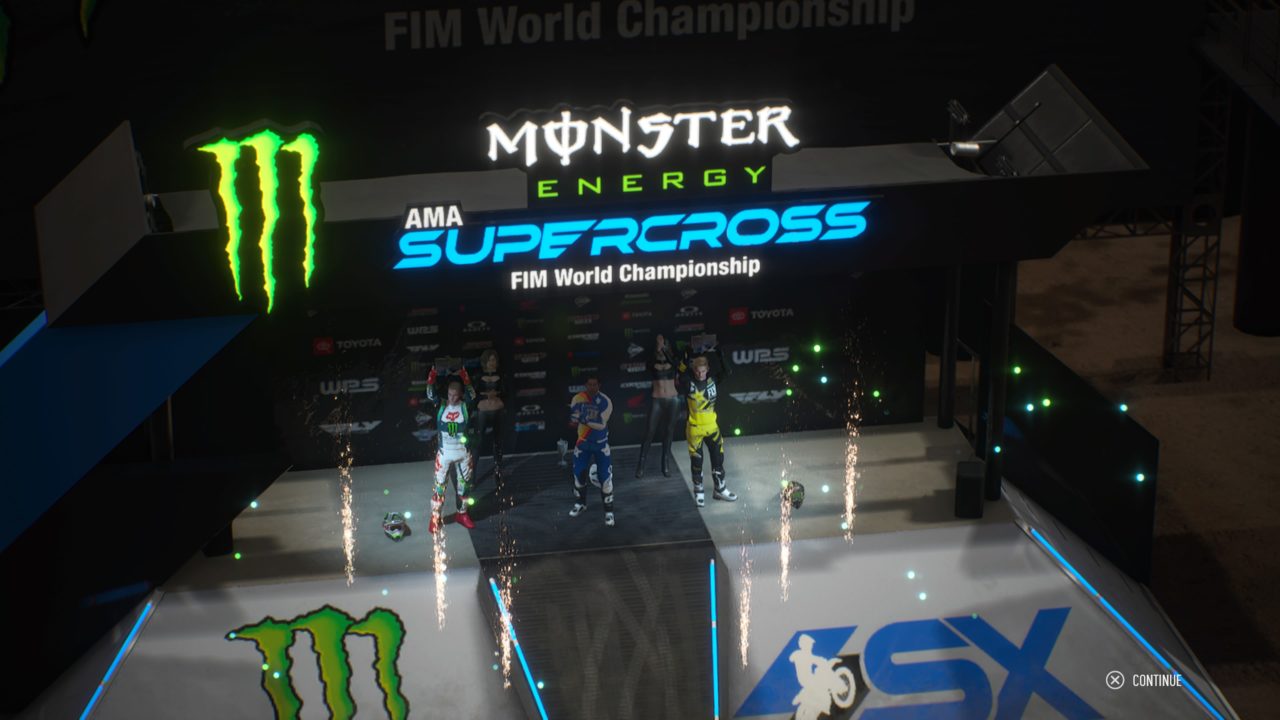 Once the event is over, you can choose to ride for an official team or trek out on your own with an official sponsor at your side for monetary support. As you begin your journey, you will be given the option to choose the less powerful bike and participate in the 250 West or East regional league. Once your league of choice has been conquered, you will then have an option to duke it out with the big boys in the 450 AMA Supercross series for all the glory.

Every arena and track felt different, and while I would sometimes win by a large margin at one venue, I would inevitably struggle to stay out of last in the very next event much of the time. 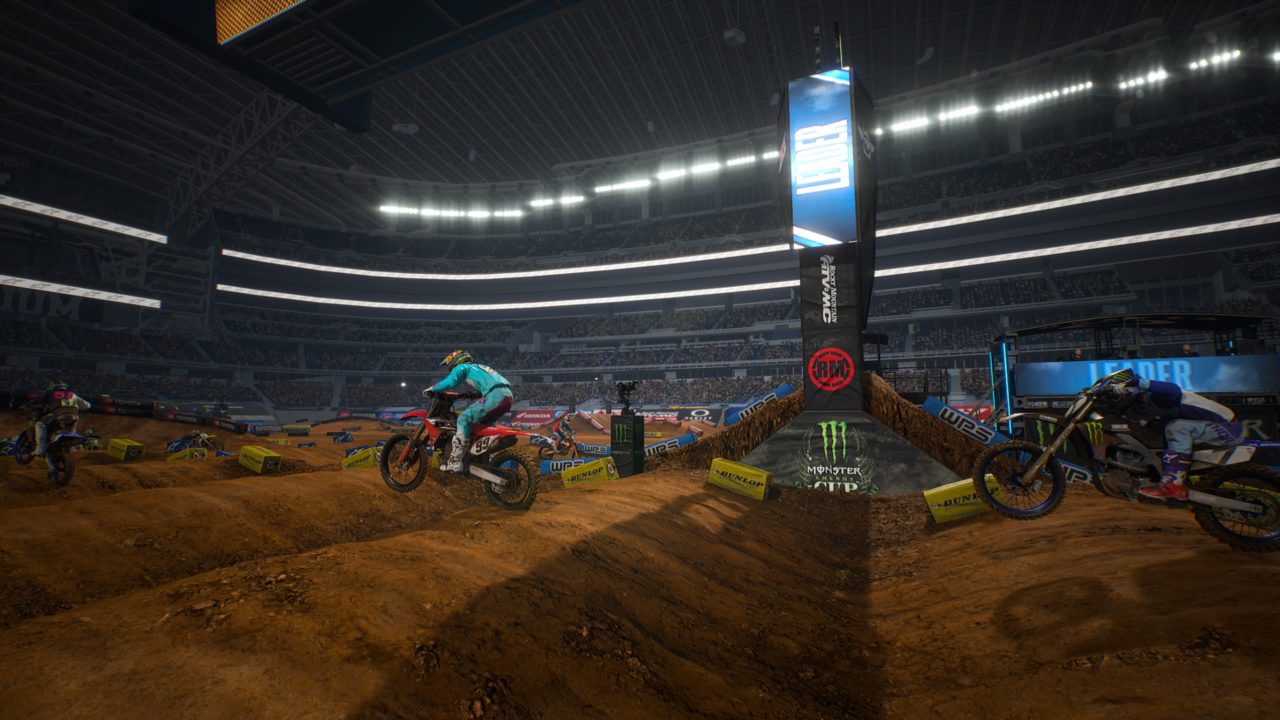 The variables that come into play during each session are so important. Sometimes you will find luck, good or bad, as the main reason for your success or failure. At another track, you may find the technical difficulty of the track itself as the reason for your downfall. Then, at other times, the better rider just beats you fair and square.

To put it another way, while there is plenty of fun to be had in career mode, there is a lot of frustration that accompanies that fun — the good kind. Although I experienced plenty of frustration in my time on the track with MESC 3, it was primarily due to my inability to execute properly, or just plain old bad luck. I never felt cheated by the aggressive AI. 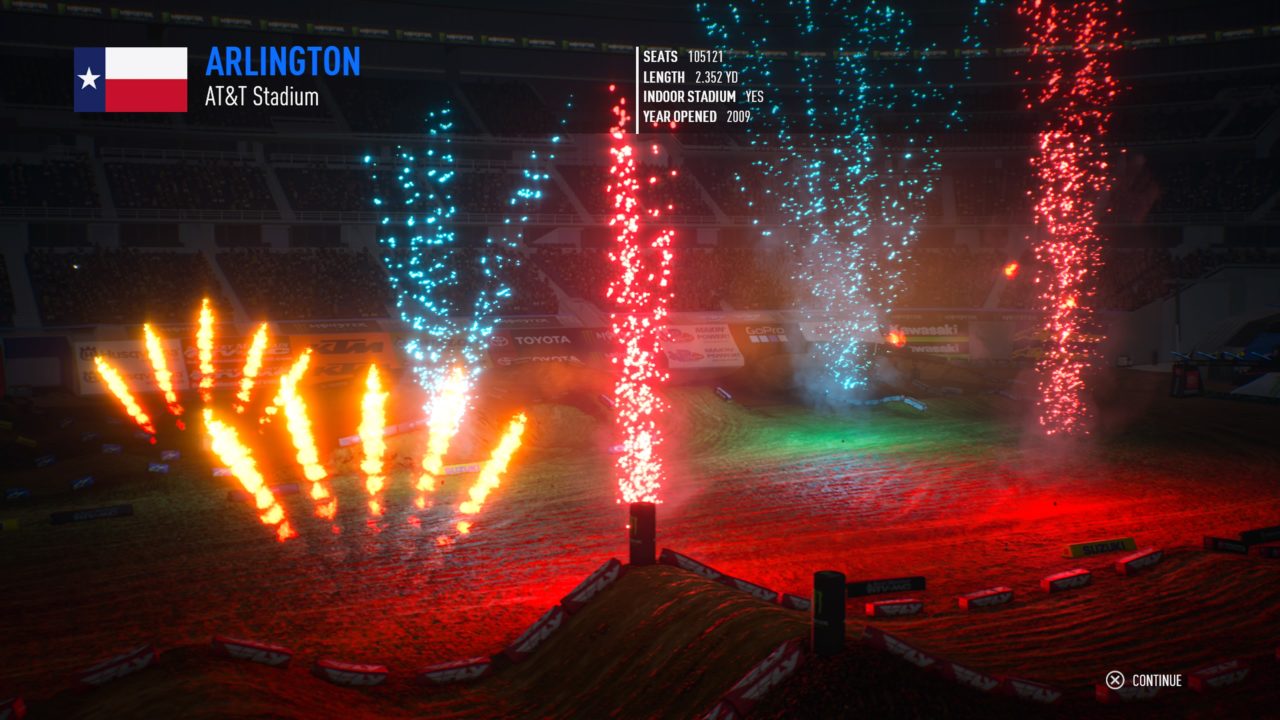 Career mode isn’t full of decadent presentation or saturated with lengthy career branching sequences that you can find in other sports titles. That said, Milestone has added some new presentation sequences this year to try and close the gap. In short, what’s here is solid, but the career mode is carried more by its gameplay than the innovation within the mode.

It isn’t often that I will list a replay mode in a review, but here we are. The replay system is done so well in Monster Energy Supercross 3 that I just had to list it. First, the graphics in the replays left me questioning at times whether the game was real or not. 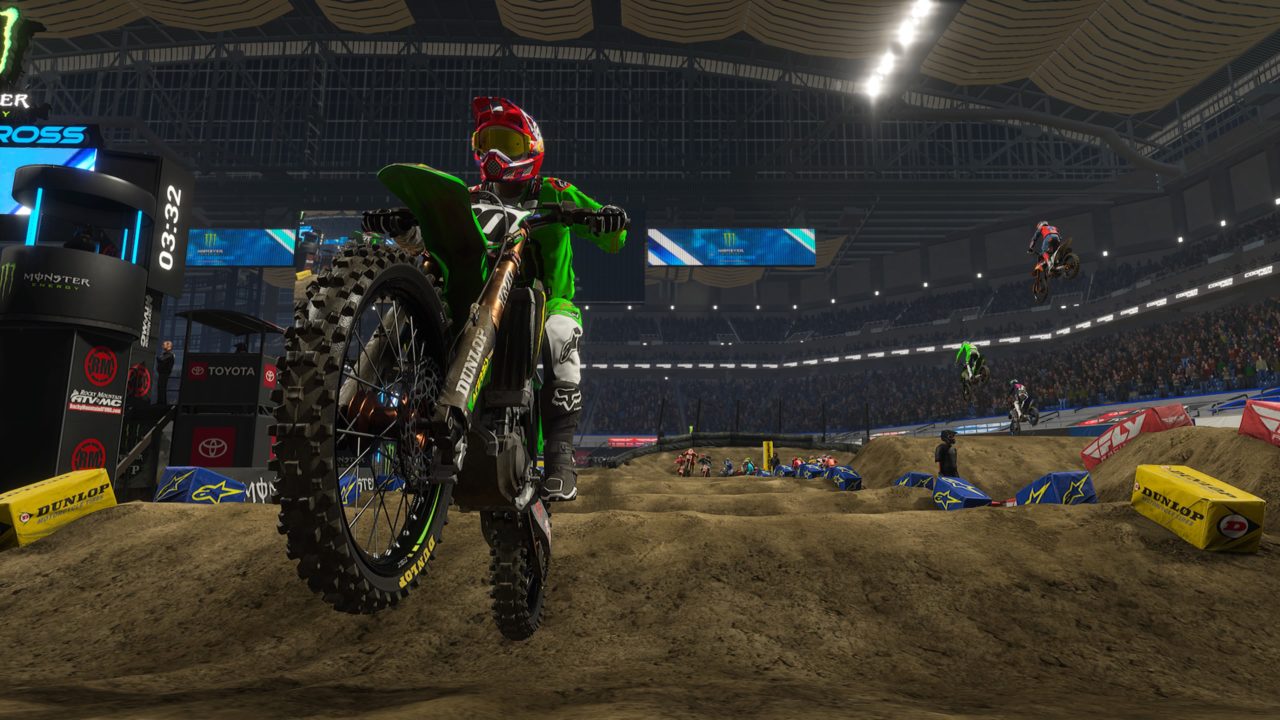 Second, the vantage points of the replay system can really help you understand where you may be struggling at a certain track. I found myself watching multiple replays of full races for multiple reasons, and every one of them was as enjoyable as the last.

Depth is inevitably an issue for a game that is officially licensed to a smaller sport like supercross (no offense meant as I love supercross), but Milestone has done an admirable job here with the depth of the title. The title offers a robust career mode, a championship mode, online mode(s), time attack, challenge mode and the newly introduced track creator (and more). 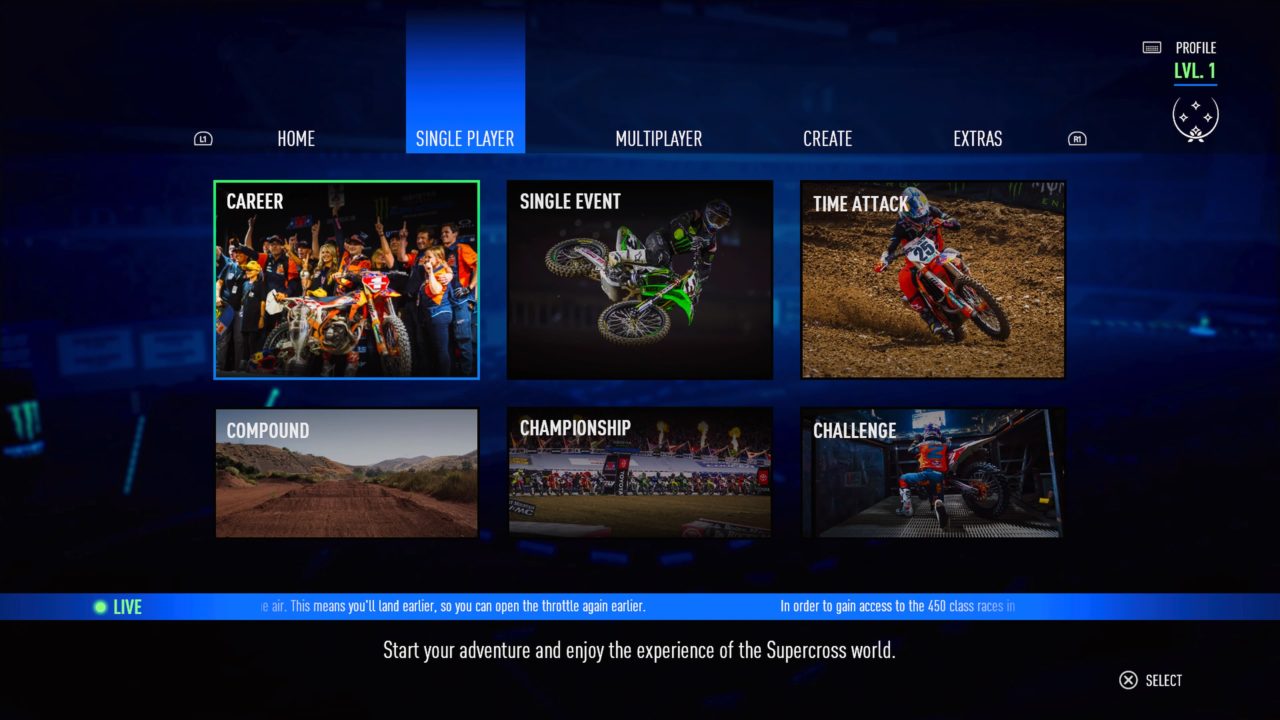 I found myself spending the vast majority of my time in career mode, but there is no right or wrong approach to MESC 3. There are enough options and avenues here to keep me invested in the game long after release, and that is a nice surprise in the motorcycle racing genre.

It seems every year Milestone is tweaking the physics system in the MESC series, and that is not a bad thing because they have still been searching for that perfect balance. This physics system is the best collective effort Milestone has put together so far, but that doesn’t mean it does not have some problems, which I will get to in a later section. 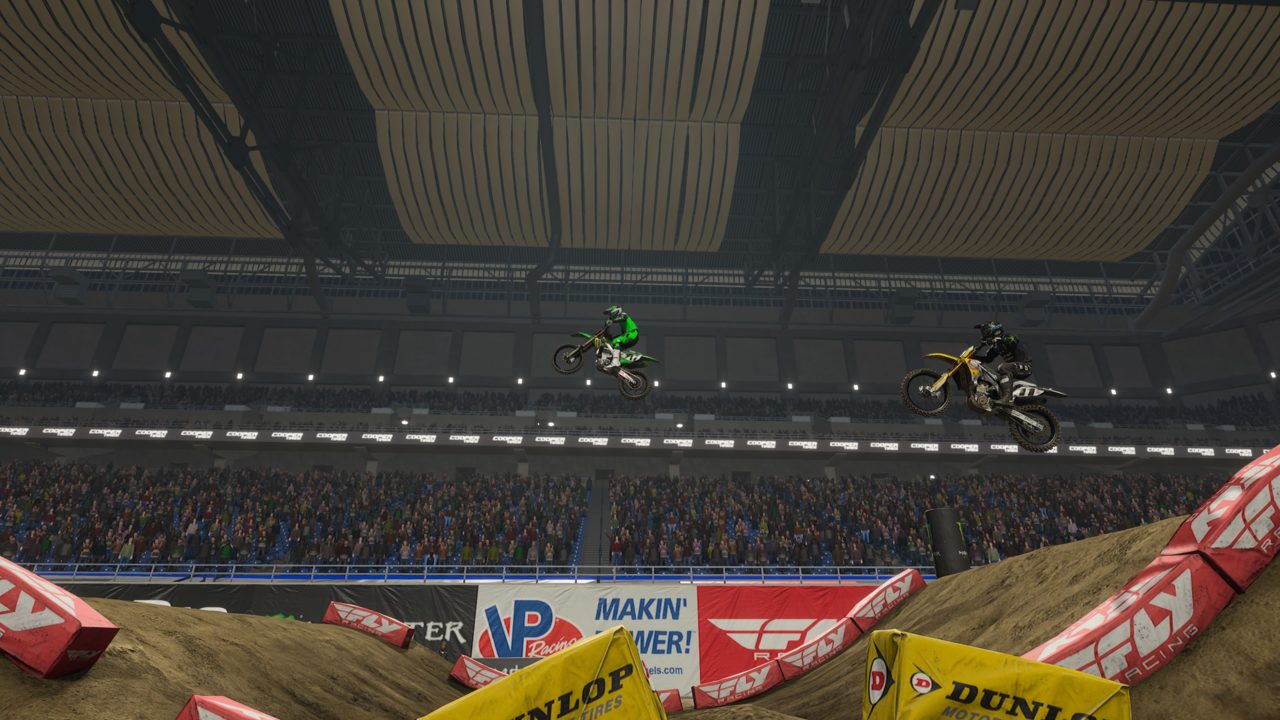 But on the positive side, the bike’s interaction with the track surface is outstanding. It’s some of the best I have ever encountered on a console to date.

The feel of the tire ripping through mud, sand, water or dirt can be felt and affects the way the bike grips, handles and accelerates throughout the race. The overall feel of the bike and the interaction with the surface variations is consistent and allowed me to understand what was possible, what should be attempted, and what was teetering on the edge of catastrophe.

So, yes, I do like the physics, but occasionally I have seen my rider ping pong off other riders from side to side (which is reasonable) or bounce off their heads (which is not). This was an issue with the first game in the series, but some noticeable improvements were made in the second release.

This physics issue has not returned to the level it was at in the original MESC, but it feels a bit more prevalent in this title than it was in the last. It’s not a massive problem by any means, but it can and will be noticed by many playing the game.

Although seemingly a bit shorter this year, the load times can be a bit rough for Monster Energy Supercross 3. Does it detract from the overall enjoyment of the game? Not really, but the load times are long enough that they will become noticeable the longer your gaming session goes.

I’m not sure there is a motorcycle game that has been made that I have enjoyed as much as MESC 3. Whether you’re a supercross fan or not, this is one title that deserves to be in your rotation. Monster Energy Supercross 3 is a beautiful blend of arcade and sim that’s full of addictive and frustrating fun that will have you consistently wanting to tackle just one more race.

Retro Bowl Review: A Mobile Game That Transcends the Platform
Football, Tactics and Glory Review: A Mix of Civilization and Football Manager