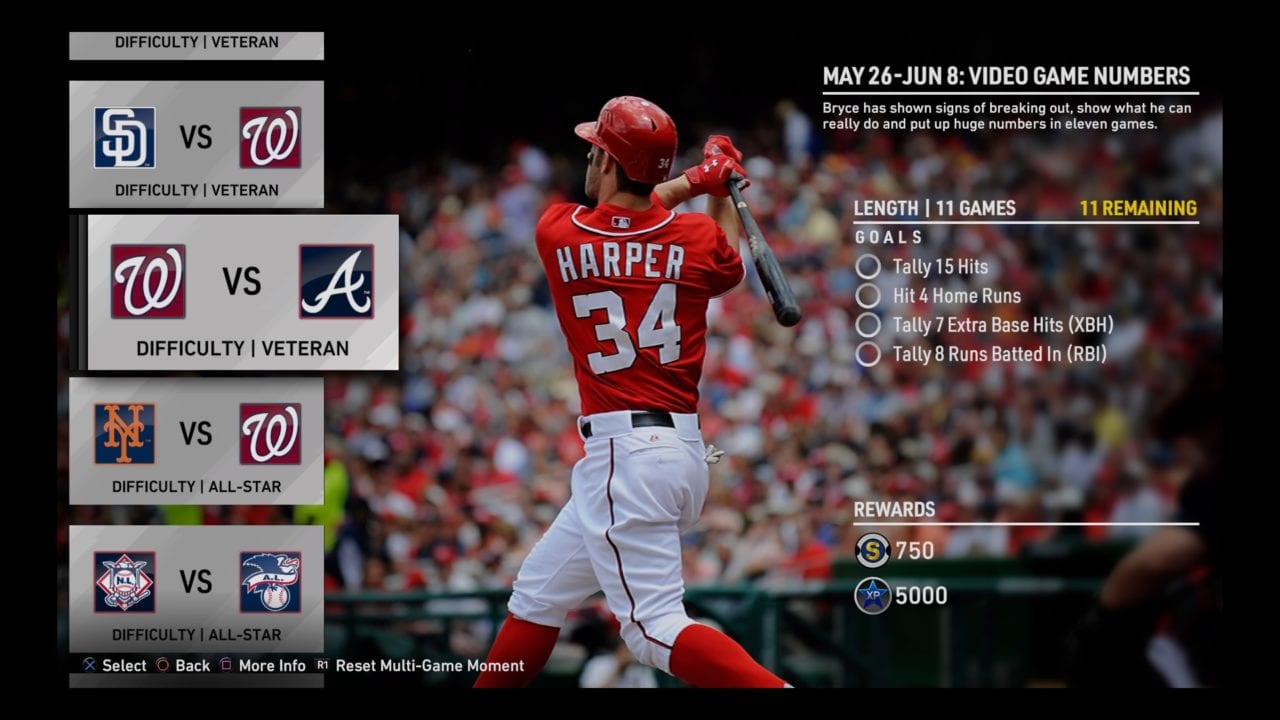 As card-collecting modes have become an increasingly important part of so many sports games in recent years, those of us who play them have watched as developers continually struggle to strike a satisfying balance between making them fun and challenging, while also finding the best ways to line a company’s pockets. Anyone who has tried to build a competitive team in any of these modes has experienced the frustration of putting countless hours into grinding for good players who can help you win games while constantly being enticed into spending real money in order to avoid getting destroyed by stacked teams in online play.

Perhaps that’s why MLB The Show 19’s Diamond Dynasty mode feels like such a breath of fresh air, providing baseball fans with plenty of ways to play the sport they love without forcing anyone to max out their credit cards in assembling their lineups. Let’s take a closer look at how exactly they’ve successfully set the standard for similar modes in the hopes that other games will follow their lead in the future. 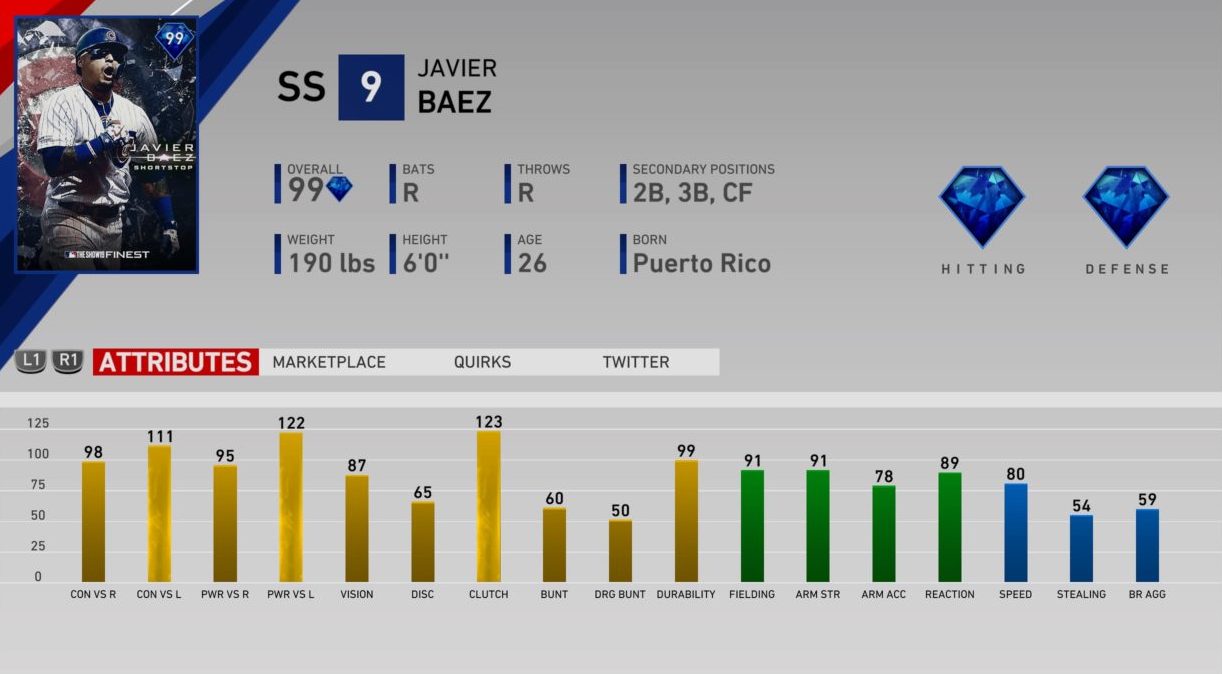 All too often, putting together a team in sports games leads you down an endless road where you might currently have Player X at a certain position but if you could just upgrade to Player Y — who is comparatively better in every single way — you would clearly have a better shot at winning. Then when you put in the time or money to finally get Player Y, guess what? There’s suddenly a Player Z on your radar who is so superior (and consequently more expensive) than Player Y. This constant need for improvement goes on and on for the entire game’s cycle.

But Diamond Dynasty in MLB The Show 19 shows there’s a better way. With so many viable cards available at every position, you can assemble a team that really fits whatever mold you like. Sure, the 99 OVR cards have some undeniably incredible attributes, but even these cards have their weaknesses, while lesser cards possess strengths that might suit your team more. Want a team that emphasizes getting on base and electric speed on the basepaths? You might have to sacrifice some power or defense in the process, but there are affordable and easily obtainable cards that can be extremely dangerous and effective in their own right.

It all comes across as much more realistic and dynamic than that usual hunt for the best card in other games because it allows people to construct line-ups that all have their own personality and each one then has to be approached a little differently by opponents. It doesn’t hurt either that every card in the game can be bought and sold on the community market this year, making it possible to purchase missing diamond pieces for your team without needing to save up a ridiculous amount of stubs.

The gradual roll-out of the Inning Programs within Diamond Dynasty throughout the cycle of MLB The Show 19 thus far has been an absolutely brilliant addition to the game this year. They provide players with tangible goals and worthwhile rewards on a regular basis. As you accumulate stars in a number of different ways across different modes, you’re easily able to track your progress as you keep your eye on the coveted prizes that always lay ahead. When you’re finally able to unlock some of the bigger rewards along the way, it’s also nice to be able to choose from a few options as well instead of simply having them thrust upon you, allowing you to select those that will better serve the kind of team you’re trying to build. 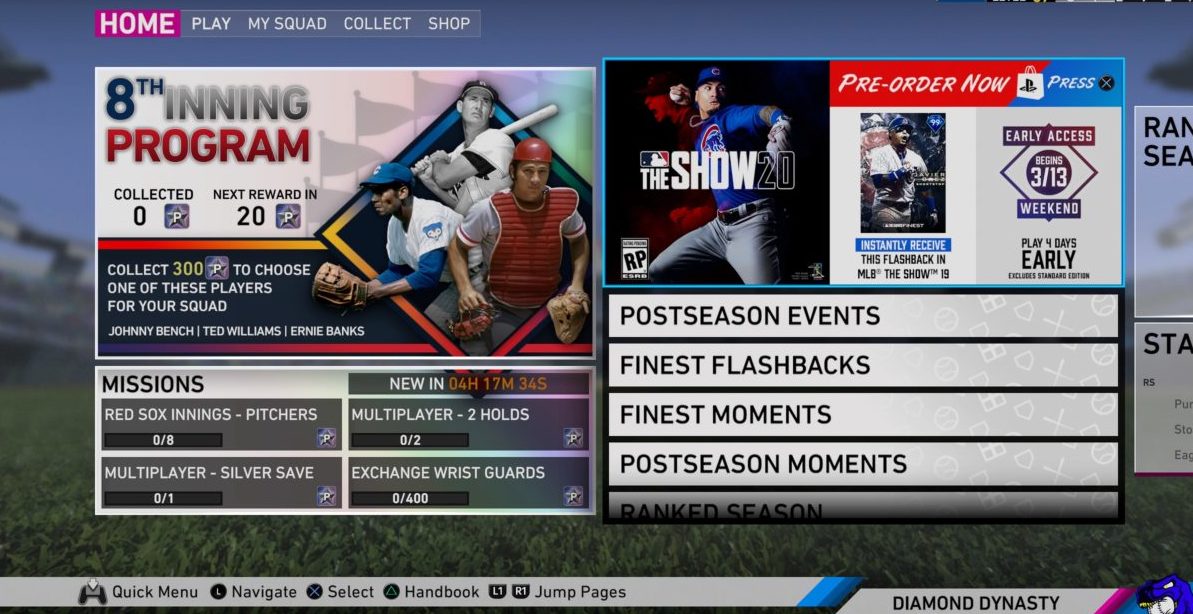 Though the majority of stars for each “inning” can be earned by completing different moments that will each present a different scenario to complete (more on that later), there are also quite a few stars that can be obtained by playing games in either online or offline modes, ensuring that every sort of player is kept happy in the process. The idea of unveiling new innings every month or so has turned out to be a great way of consistently introducing new cards while keeping people returning to the mode regularly. It also prevents anyone from getting too far ahead of others. It’s a vast improvement over last year’s interminable stat grind that only really catered to the hardcore players who had plenty of time to devote to the game.

Every card-collecting mode worth its salt should have plenty of different ways to play the sport in question, and Diamond Dynasty sets the bar high in this regard as well. It offers a plethora of enjoyable options to players regardless of their preference for online or offline play, or how much time they have on their hands to get their baseball fix.

If you’re looking for the ultimate head-to-head experience and can squeeze in a full 9-inning game, Ranked Seasons has got you covered as you try to win games to earn points that will put you in higher tiers in search of better rewards at the end of each season. Don’t have time to play 9 innings? No problem. Try out Battle Royale instead, where you attempt to draft a balanced team to square off against others in 3-inning games and the more games you can win without losing two, the better the rewards will be. 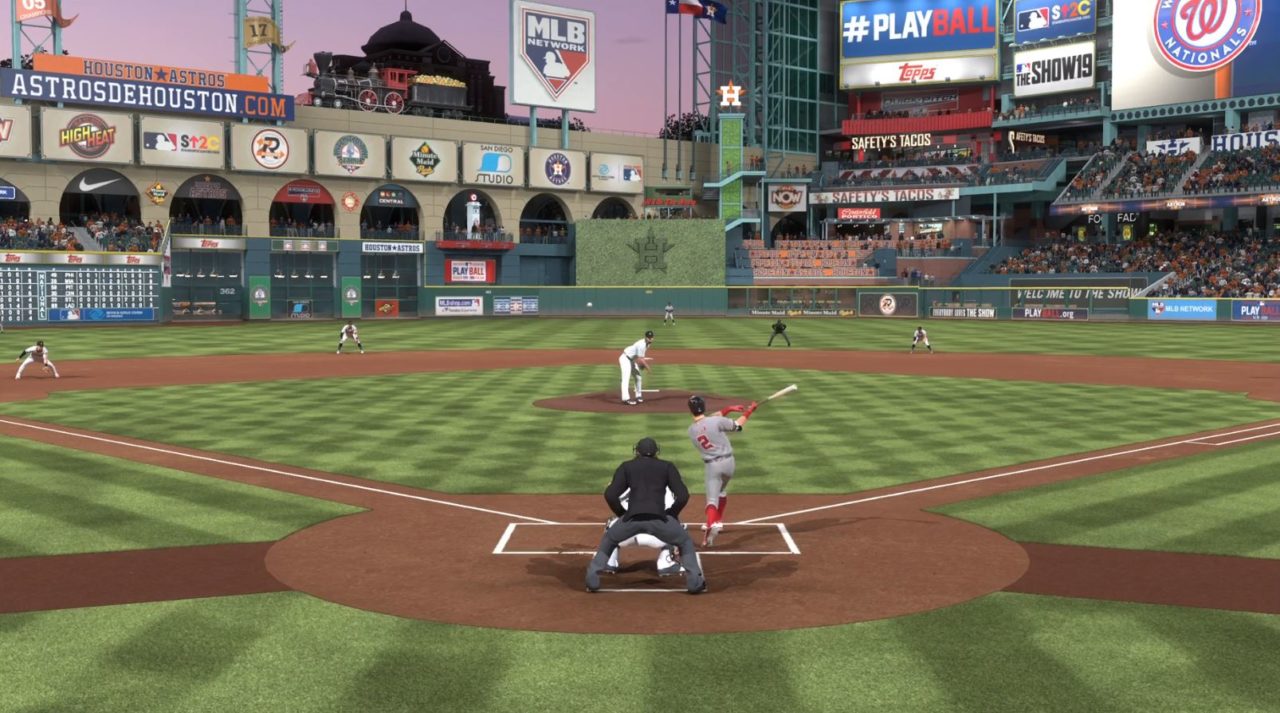 What’s that? You don’t like online play, you say? That’s perfectly fine as well. Conquest is another innovative mode that challenges you to conquer various maps in the vein of the board game Risk by beating the CPU in 3-inning games. You’ll also find a lot of packs hidden throughout the board as you journey along. If you don’t have time to even play a 3-inning game, you’re still not out of luck as you could always try one of the easier moments, with some of them possibly only taking as little as a minute or two if you’re good enough and can complete them on the first attempt.

The special events that have been rolled out sporadically have even been better this year than last, confined largely to 3-inning affairs that use different lineup restrictions in order to ensure people are often playing with some cards that they may not be all that accustomed to using.

As a new way to play within Diamond Dynasty, the introduction of moments in MLB The Show 19 has been one the mode’s best innovations. This sub-mode enables people to play out quick scenarios that can be accomplished in a brief amount of time, alongside longer ones that present some monumental challenges. In theory, they’re not a revolutionary idea when compared to similar concepts in Madden or NHL, but the difference is in the details. Those similar scenarios in the aforementioned games often seem redundant and tedious, but the ones in Diamond Dynasty showcase enough variety to make many of them not only tolerable but downright fun. 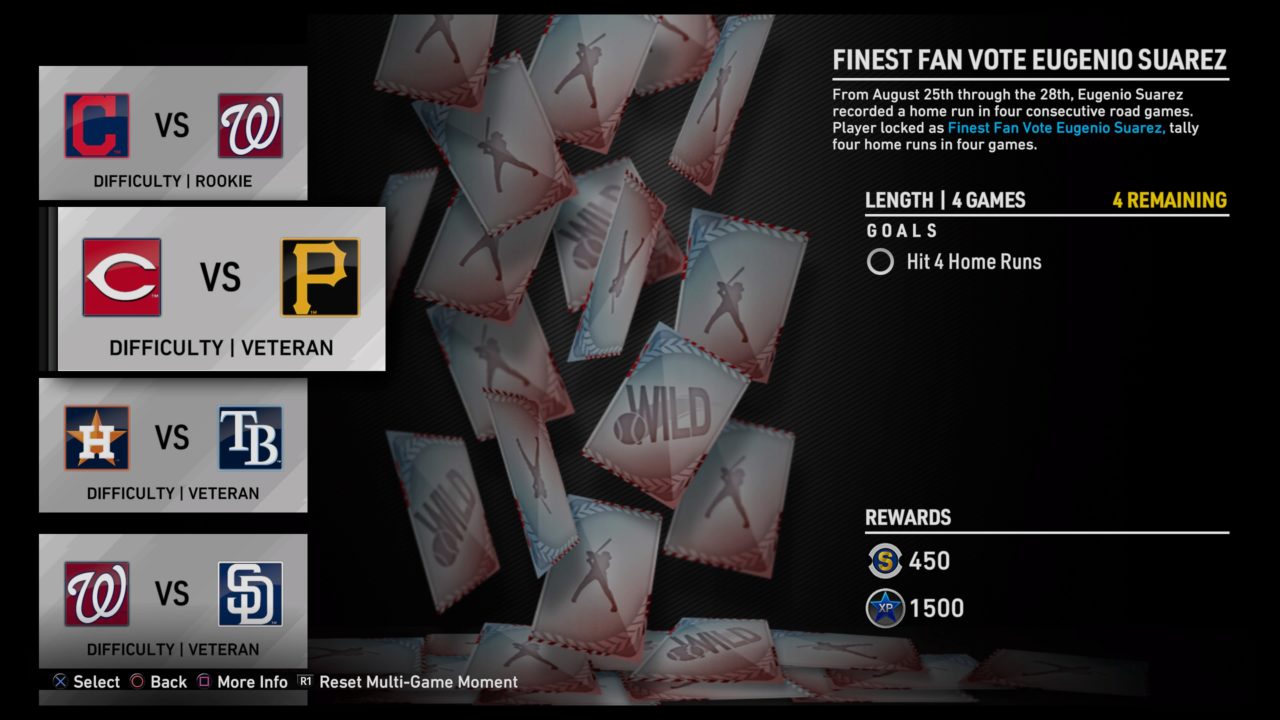 From those that last only a mere at-bat to those that require playing a full 9-inning game against a team full of legends, there’s something here that will suit everyone’s time restrictions or skill level. To add to the ingenuity, it’s great to see some cross over with the Road to the Show mode in how some of the moments involve being locked in as one player over the course of an at-bat, a game or even a series of games in order to accomplish certain tasks.

Granted, it can be a little frustrating at times to have to repeat moments over and over again when you fail to complete your objectives, especially if they require playing a full game multiple times. Regardless, they’re largely challenging and addictive enough that you’ll often want to jump right back in to finally finish what you started. Best of all, there are plenty of really good cards that can be acquired through beating these moments.

All of the upgrades to Diamond Dynasty would mean little if the game wasn’t actually good, so thankfully the action on the field is better than it has ever been. While all of the other major sports games require you to heavily rely on a number of AI players in head-to-head matches that can too often easily be exploited by savvy players, MLB The Show 19 provides the purest skill contest of all of them. They’ve even finally managed to almost entirely remove the exploits people could use in past years to gain an unfair advantage, with baserunning and bunt cheesing no longer able to routinely take advantage of bad animations.

There are those who would argue there remains too much random chance involved in hitting, where good bat-on-ball contact can occasionally lead to line drives right at a fielder. Some also have the feeling while pitching that you too often hit your spot with your pitch only to throw a meatball down the middle of the plate. However, the better player will still end up winning the majority of the time. Developers have even taken recent measures to address the issues via a patch that entirely eliminated the impact of a pitcher’s HR/9 attribute on the outcome of batted balls in online play, leading to results that even better reflect the stick skills of those involved.