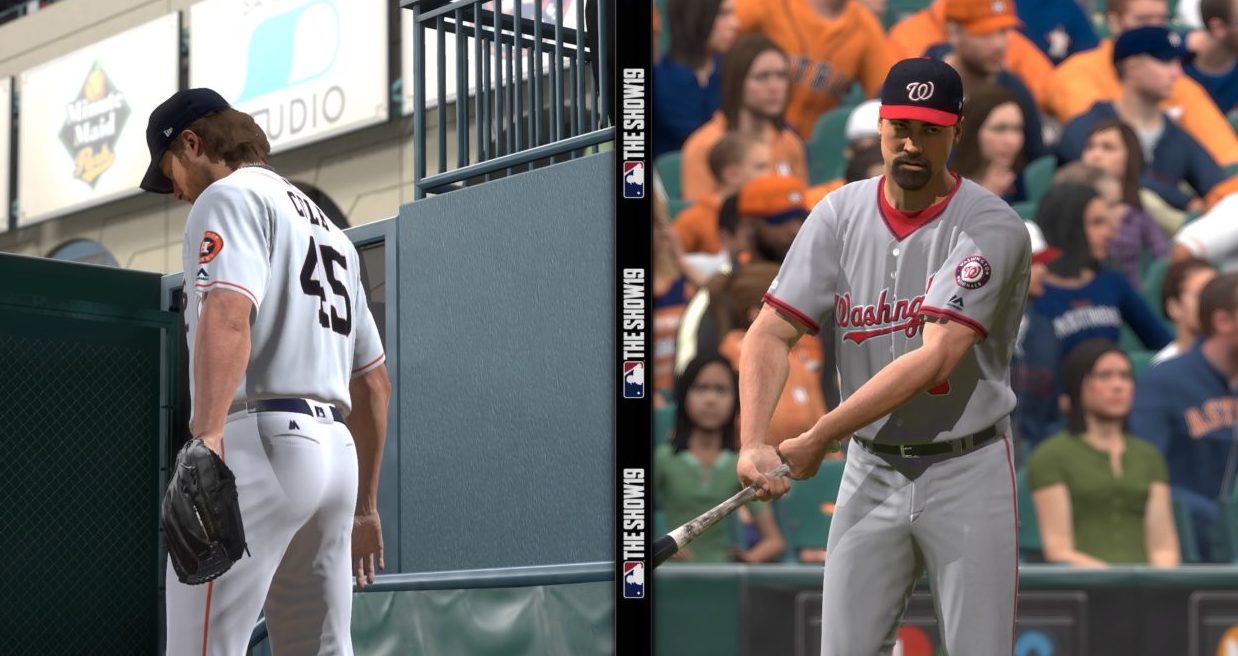 Tonight, baseball fans will be treated to a sublime matchup between the Houston Astros and Washington Nationals, so we’re here to use MLB The Show 19 to simulate the World Series.

The Astros set a slew of franchise and MLB records as they notched a league-best 107 wins while the Nationals opened the post-Bryce Harper era with a thrilling second-place finish in the NL East. While the Astros had their postseason hiccups against both the Tampa Bay Rays and the New York Yankees, the Nationals’ postseason has been nothing short of magical. Though many credit the Ewing Theory via Bryce Harper’s expensive and messy exit for some of their success, the Nats dramatically took down the mighty Milwaukee Brewers for their first-ever playoff series win, then went on to defeat the 106-win Los Angeles Dodgers, and the red-hot St. Louis Cardinals with a dastardly combination of budding superstars, shutdown pitching, some astounding clutch moments from Michael A. Taylor, and the magical bat of Howie Kendrick.

As with last year, this simulation will be done in MLB The Show 19’s Postseason mode. Last year’s model somewhat incorrectly predicted the Dodgers in five games, but it did peg David Price’s heroics, Joe Kelly’s lights-out performances, Cody Bellinger’s breakout, and, of course, the resurgence of Matt Kemp.

Only 84 players have played for both the Astros and the Nationals, and only one of them is currently on either World Series roster: Astros hero Brad Peacock. Meanwhile, Joe Smith graciously ends his streak of 782 regular season appearances without a World Series trip, the longest active streak for a pitcher. Will they share the spotlight in a bullpen game like they did to take down the Yankees in Game 6 of the ALCS? Or will Anthony Rendon spring even further to life playing his first-ever World Series games in his hometown of Houston and lead the Nationals over the Astros?

Are the Expos’ postseason woes and curses finally subdued? How many former Detroit Tigers and Arizona Diamondbacks are in this Series? Who shall the ghost of Rusty Staub favor? Only (digital) time will tell.

Cole vs. Scherzer! Verlander vs. Strasburg! Greinke vs. Corbin! These pitching matchups are delicious. Let’s get it going! 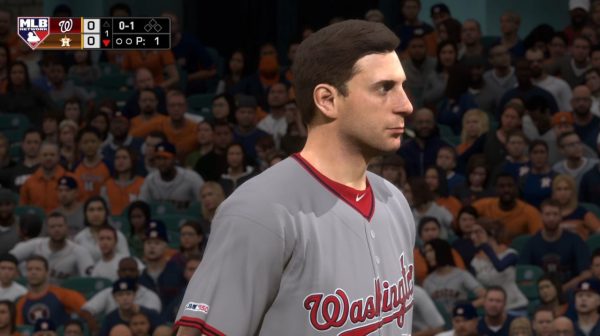 The 8th inning finds the teams locked in a 3-2 nail-biter before Roberto Osuna’s postseason woes continue, giving up three runs with one out in the top of the 9th. Ryan Zimmerman goes 0-4 in his World Series debut, but Juan Soto, Trea Turner, Victor Robles, and Adam Eaton each notch two hits (Kurt Suzuki went 3-3 and drew a walk). The Astros’ lopsided performance saw George Springer, Alex Bregman, Carlos Correa, and Yordan Alvarez collect two hits each and total eight of the team’s 10 hits. However, the sleeping beast has come to life as Yordan connects for two home runs in the game, his first and second of the postseason, to walk it off of Daniel Hudson and open up the Series with a triumphant bang. 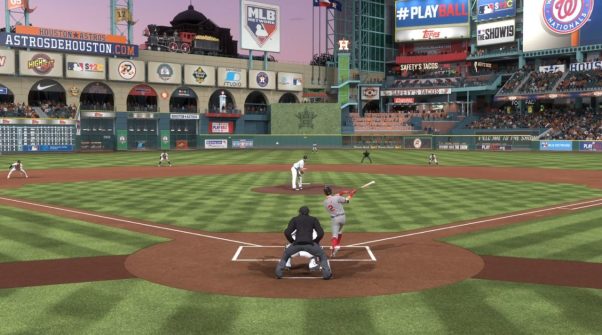 The Astros’ bats stay hot to support an 8-inning gem from Verlander, who only gives up two runs and strikes out four, while Strasburg gets tagged for five earned runs and only pitches four innings. ALCS hero Jose Altuve continues his exceptional October, going 4-4 with 4 RBIs and becoming the third Astros player in this World Series to have a multi-homer game. George Springer connects on his third home run in two games as the Astros take a two-game lead into Washington. From the Nationals side, Adam Eaton stays hot and goes 3-4 while Trea Turner takes Justin Verlander yard. Zimmerman’s first World Series hit is a big one, tying the game in the third inning with an RBI single that brings home Eaton. Despite the nine-hit effort from the Nationals, the Astros pounce for 17 in front of a rowdy home crowd. 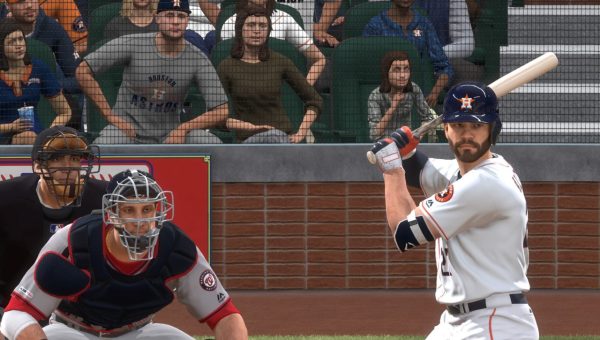 Nationals Park’s first-ever World Series game is an absolute banger. After using six pitchers, the Nationals walk it off in the 10th inning off of Hector Rondon. Corbin only lasts three innings and gives up three runs while Greinke allows the same over seven. Springer remains on a tear with another multi-hit game, but RBI doubles from him, Bregman and, yes, Greinke, are not enough to silence the Nats. Anchored by an astounding two home runs from Kurt Suzuki that provided the former Expos with all of the runs they would need in nine innings. The big-time bat of Anthony Rendon ripped a walk-off home run to send D.C. into a frenzy and breathe new life into the series.

Ladies and gentlemen, we have a series. Sanchez dominates once more, silencing the Astros bats across seven innings of three-hit ball. Josh James relieves Peacock in the fourth after he gives up three runs, and he allows one of only two hits that the rest of the bullpen would yield across the final five innings. Despite this rebound performance, the once-hot Astros bats squirrel away only five hits: two from Robinson Chirinos, and one each from Altuve, Bregman and Yuli Gurriel. Rendon, Soto and Anibal Sanchez each hit a double to mirror Greinke’s performance in Game 3. Zimmerman and Suzuki continue to hit in the clutch for the Nationals to tie the World Series at two apiece.

Yordan Alvarez comes alive once more, hitting two home runs in a single game for the second time, and proving that the juiced balls must exist digitally in The Show as well. Soto goes 2-3 and Suzuki notches another RBI double, but Astros pitching shuts down Eaton, Rendon, Zimmerman, and Robles. Despite his earlier woes, Hinch rides the stats to trot Osuna out in the deciding 9th, and for the first time in many moons, Osuna locks down the half inning. The Astros are a win away.

It’s not over yet! The Astros only needed six outs to win it all while up 3-1, but the bullpen imploded for six runs between the 8th and 9th. Strasburg goes seven strong innings while Greinke goes a great six, but each Astros bullpen pitcher is tagged for at least one earned run. Rendon, Soto, Zimmerman and Turner combine for nine of Washington’s 12 hits, and the former three drive in all seven of the team’s RBIs. The Astros’ second through seventh hitters each only earned one hit, and the two-run Bregman home run was not enough to withstand the bullpen collapse. Gerrit Cole and Patrick Corbin square off in the winner-take-all Game 7.

There you have it! What do you guys think? Which team in how many games? May it be a beautiful and blissful Series for you all.