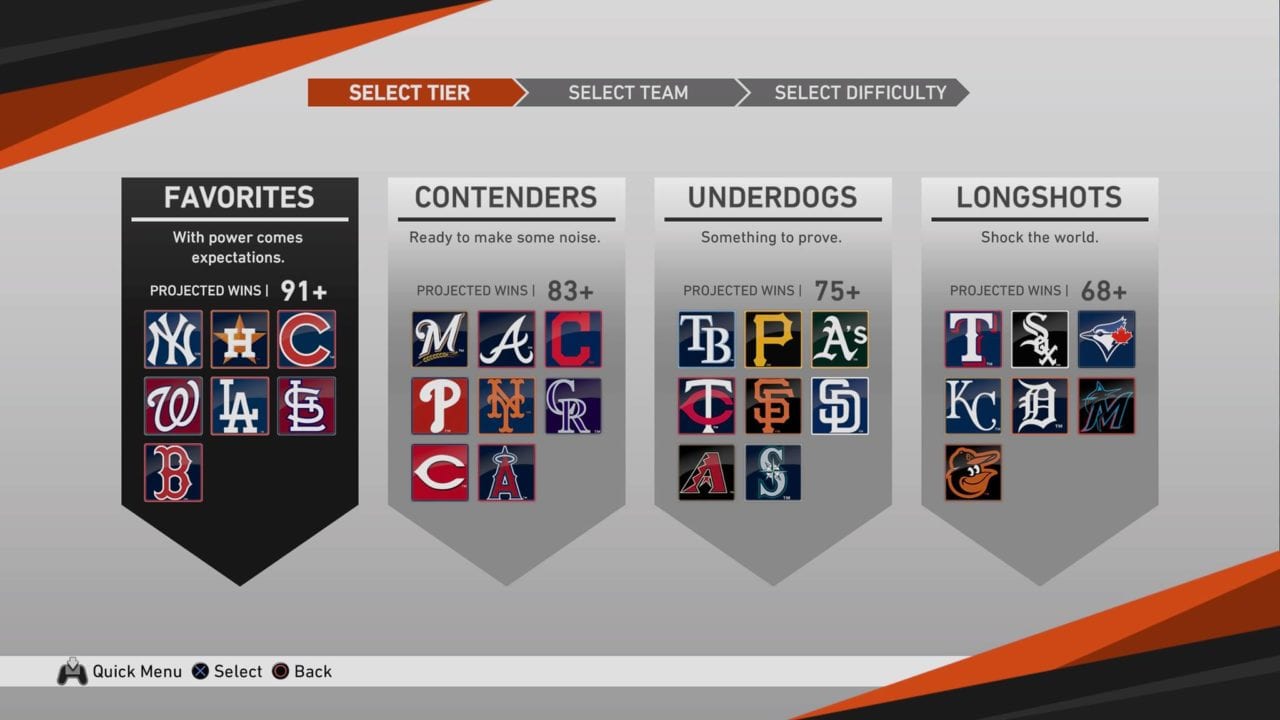 During the lead up to MLB The Show 19, I was excited about the new March To October mode. I used to strictly be a franchise player, but during the last couple years I’ve started to lose my excitement for the mode. I started simming more games and finally got to a point where I was simming more games than I was playing.

The mode was never the deepest in the genre, so I found myself without much to do because I was doing all this simming. So when I heard about March to October and found out it could take the franchise experience and condense it down to a manageable length of time, I thought this mode could be perfect for me.

Well, to be honest, it’s not perfect for me. And being even more honest, the mode is exhausting so far. My first three games I went into extra innings. One of them lasted 15 innings before I finally hit a walk-off single. The issue here is that almost all of the games it drops you into are late-inning games where the score is either tied or you are up or down by a run.

For a mode that is supposed to save time, it seems like it would be more fun just playing a whole game in franchise mode.

In addition, the mode doesn’t give you the ability to pick a custom roster to start. It uses the default roster and you are stuck with it. You do have the ability to manage your lineup, bullpen and starting pitching staff, which is good, but after that you have almost zero control.

You are also unable to use dynamic difficulty or adjust any sliders such as pitch speed, which is important to a lot of players. Also, there are no call-ups, no send downs, basically nothing to do with how a real baseball season would unfold. You are given a chance to make a trade at the deadline, but that’s about it.

I do like the fact that the teams you can choose from are broken up into tiers. Those would be favorites, contenders, underdogs and longshots.

After this, it gives you a graph of where your expected wins should be, how many wins it should take to win your division, and how many games it would take to win a wild card spot. I really like this concept.

The core of the mode is about building momentum.

The simulation engine uses your wins and losses, along with how you came about earning those wins and losses, to simulate the next handful of games and then dumps you into what’s deemed a critical situation for your team at that particular juncture of the season.

Again, this is a good idea in theory, but maybe not so much in practice. I say that because you are dropped into almost the same situations, or at least similar situations most of the time, so the mode can get boring.

I would actually like to see myself being dropped into games with some lopsided scores to even things out, but I haven’t really seen that while grinding through the games I played so far. You can also be put into full games using player lock. They can be fun, and it helps to get through some of the regular games at a quicker pace.

More Needs to be Explored

I still believe this mode is a good idea, but I feel like it needs to be more fleshed out for next year’s iteration. Too many extra-inning games really hurt the pacing of the mode. Maybe that’s just me, maybe people like the suspense of playing those games, but I find it frustrating.

I just want to get to the next game. I also wish the developers included a forfeit option for games. If you decide to quit the game, your only option is to save and exit. So when you go back to the mode you have to continue the game you were playing.

Overall, March To October is hit and miss. It’s a good, yet flawed concept where there is fun to be had, but also plenty of frustration to go along with it. Unfortunately, I don’t see it as a viable option to replace franchise mode for those looking for a more streamlined experience.

There are too many things that are not under your control. And if you like making moves, or realistic rosters and stats, I don’t think you are going to get it with this mode.

Discussion
Click here to reply to the discussion
Continue Reading
You may also like...
Related Topics:baseball, franchise, march to october, mlb, mlb the show 19, SDS, spotlight, The Show

MLB The Show Impressions: Improved, But By How Much?
Most Interesting Teams to Control in MLB The Show 19 Franchise Mode