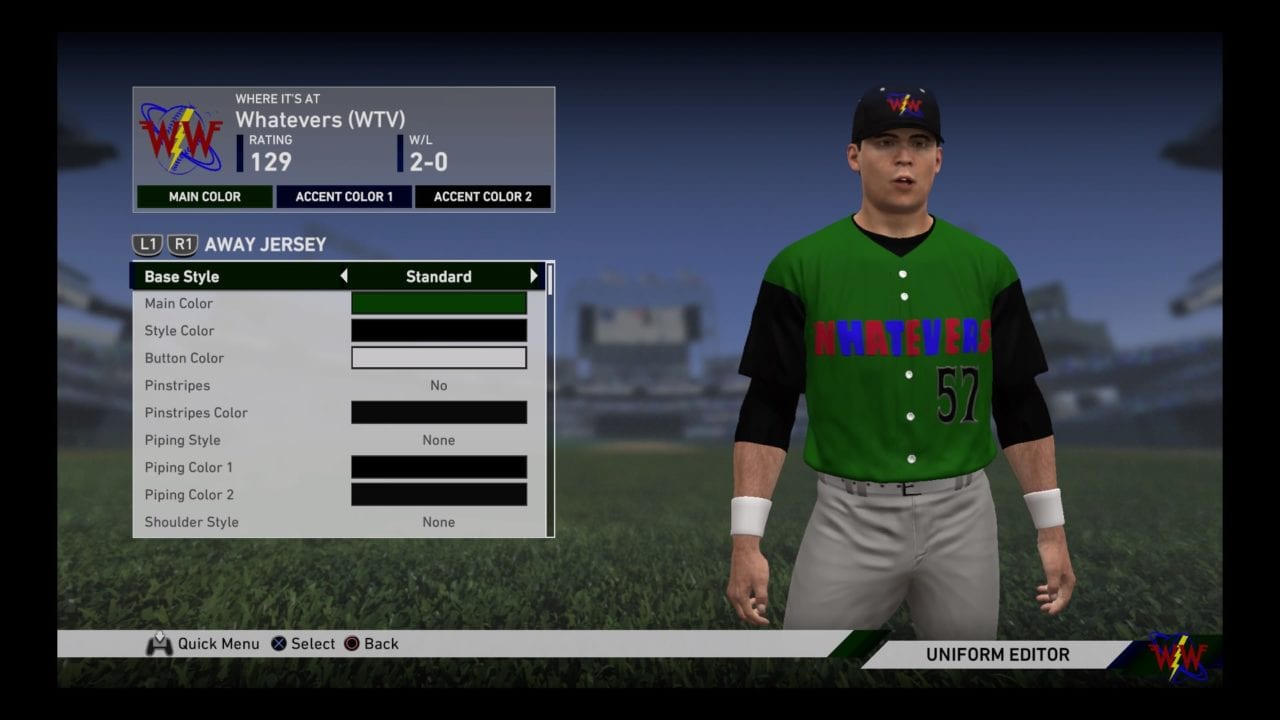 With the release of MLB The Show 19 comes the inevitable return of its card-collecting behemoth of a mode, Diamond Dynasty. While the essentials may remain fundamentally the same, there are plenty of new wrinkles this year to keep things fresh and interesting. Thankfully, some of the more tedious parts of the mode from previous years have even been removed (and in the case of all of those stupid team collectibles and bobbleheads, hopefully burned and/or buried forever). There are so many different ways to both build your team and play with them in Diamond Dynasty that it can get just a tad overwhelming at times, but it’s also addictive enough that it will often leave you wondering exactly where five hours went. As I build my Diamond Dynasty team — the Where It’s At Whatevers — into a formidable unit, I will walk you through the ins and outs of its construction and hopefully reveal some method to my madness.

Having purchased the MVP Edition of MLB The Show 19, I was able to claim some rewards to help get my team started. From my free fantasy diamond pack that allows you to choose between a plethora of different players, I went with my heart over my head and chose Cliff Floyd. As an Expos fan, I simply couldn’t resist. I was also provided a reward for taking part in the Alpha testing of the game and came away with Carlos Correa, so it seems like it was a good idea to participate in that testing.

The 10 packs that also came with the MVP Edition didn’t really yield anything all that incredible and I was left with a rag-tag group of mostly silver and bronze players at all other positions. It definitely wasn’t the most talented team but it was a foundation that I was determined to mold into something worthwhile. 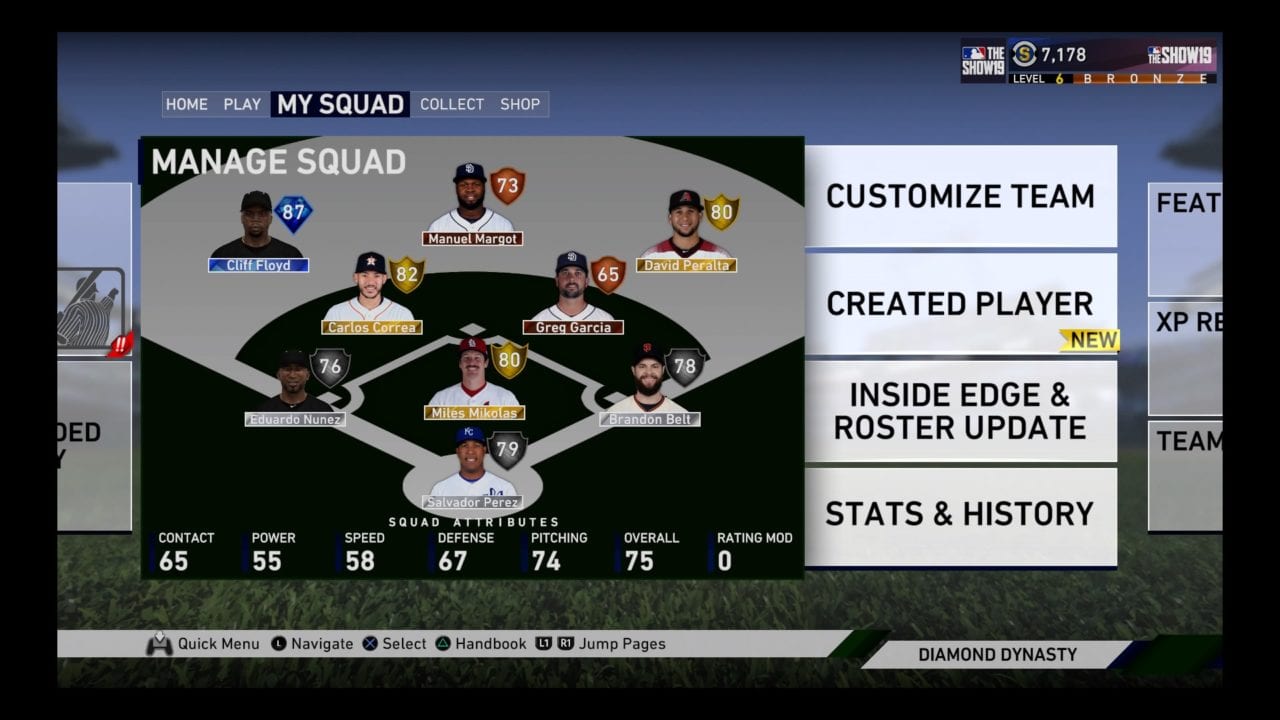 Now, where to begin?

Conquest is always a good place to get into action against the CPU and I played through the smaller first map in order to get a silver Eric Gagne for my bullpen. Obviously, not the greatest reward but it also didn’t take very long to complete either. I’ll probably come back to Conquest later to finish the other maps, including the usual larger map with all of the MLB teams’ strongholds to conquer that will reward you with a diamond Ty Cobb card. I suppose a diamond is a diamond but that Cobb card doesn’t really look all that impressive (and I also understand the man was a bit of a jerk, to boot). 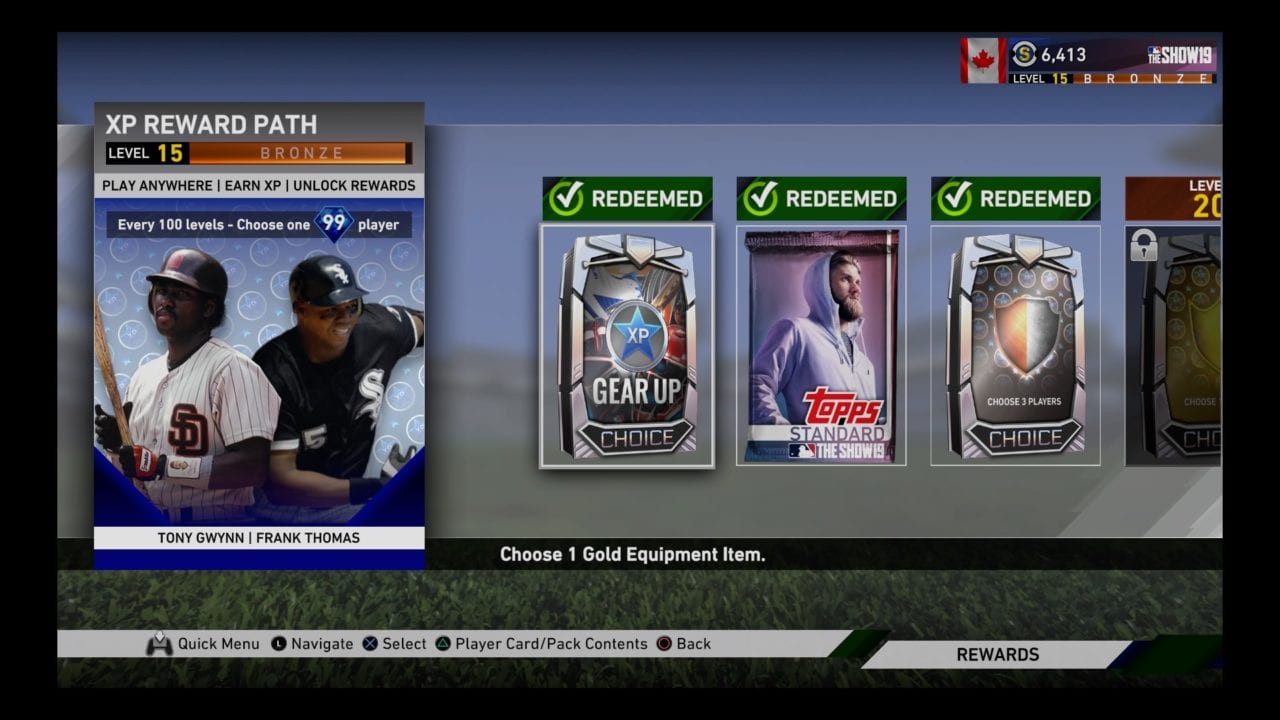 The great thing about starting to play some games in any of the Diamond Dynasty modes is that as you do, you gain XP and that XP is tied to rewards that only get better as you level up. There are some pretty decent gold cards you’ll be able to choose between that can really bolster your team as you’re just starting out. 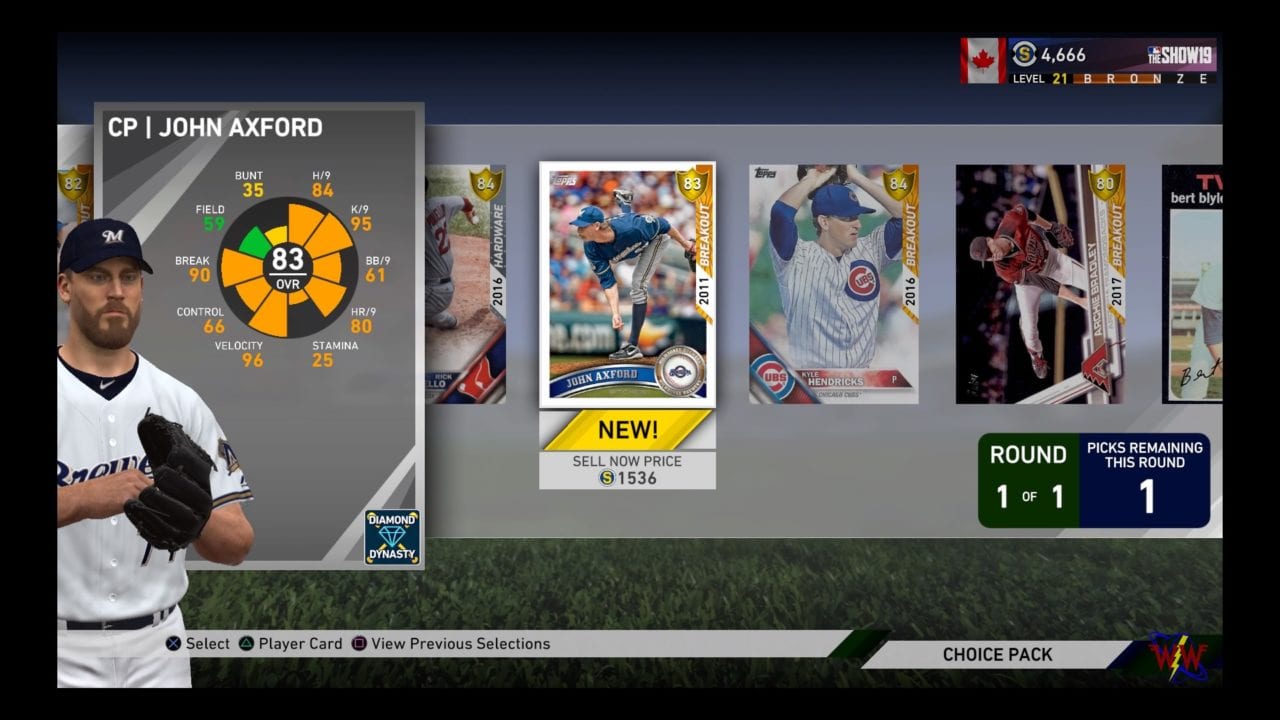 I decided to check out some of the Moments that are new to Diamond Dynasty this year, completing some of the easier ones that require less time and effort. Each one rewards you with Program Stars and, just like with XP, those will unlock better and better rewards with the more you accrue.

Anxious to get into some online play, I jumped in to grind the first event and try to get the necessary 20 wins to acquire diamond Cliff Lee, which would be the first diamond on my pitching staff. After playing some close games over the course of the week (and a few blowouts, of which I’ve been on both ends), I’m happy to say that I was able to get those 20 wins and the new ace of my pitching staff. 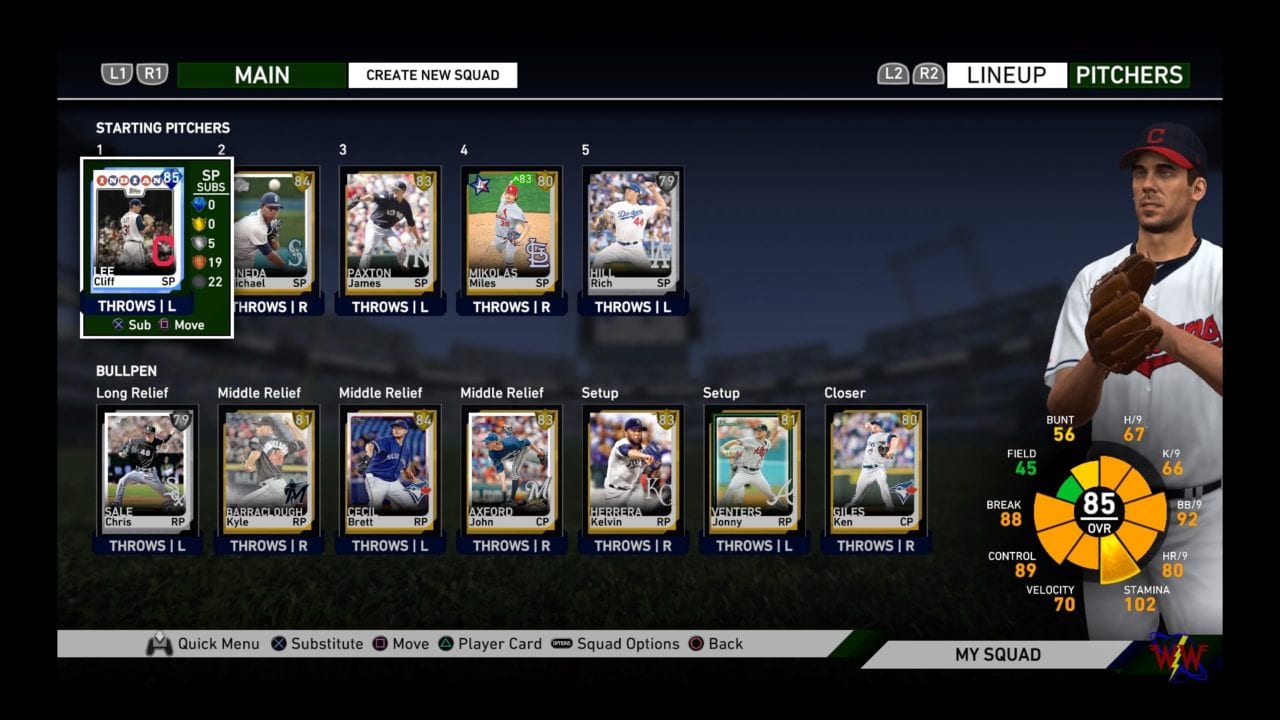 I’ve dipped my toe into Ranked Seasons as well, aware that losses don’t really matter all that much in the initial Spring Training level because you won’t lose any points. I’ve gone 2-0 so far, including a fantastic first game of the year that involved me coming back from down 5-1, hitting a home run to tie the game with two outs in the ninth, and then hitting another in the tenth to win it. I’ll definitely be trying my hand at least getting to Pennant Race level for those gold rewards. 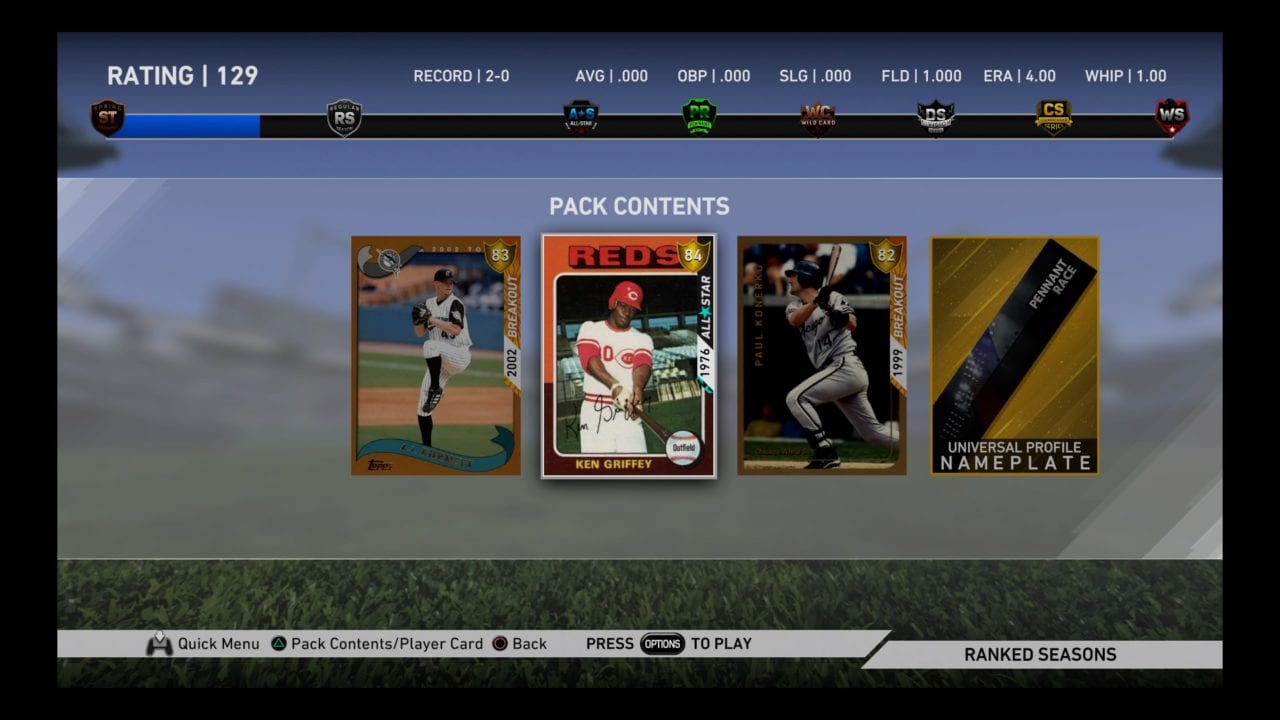 I’ve started on some of the Live Series collections, having finished most of the starter collections and getting little as usual from the pack rewards, and some of the rewards for completing teams aren’t too shabby. I’ve so far done the Marlins, Royals and Blue Jays collections and got three pretty good gold relievers for my troubles in Kyle Barraclough, Kelvin Herrera and Brett Cecil. You can do a lot more with the cards after you’ve collected them this year, too. Be sure to collect all silvers and golds in the Created Player positional missions as well and then — because they will all be unsellable — you might as well exchange all of the cards you collected for better cards that you can then sell or use to start your next collection. It’s appreciated that this year, once you’ve officially collected a card, you can then use it in an exchange but the record of you collecting that card will remain. 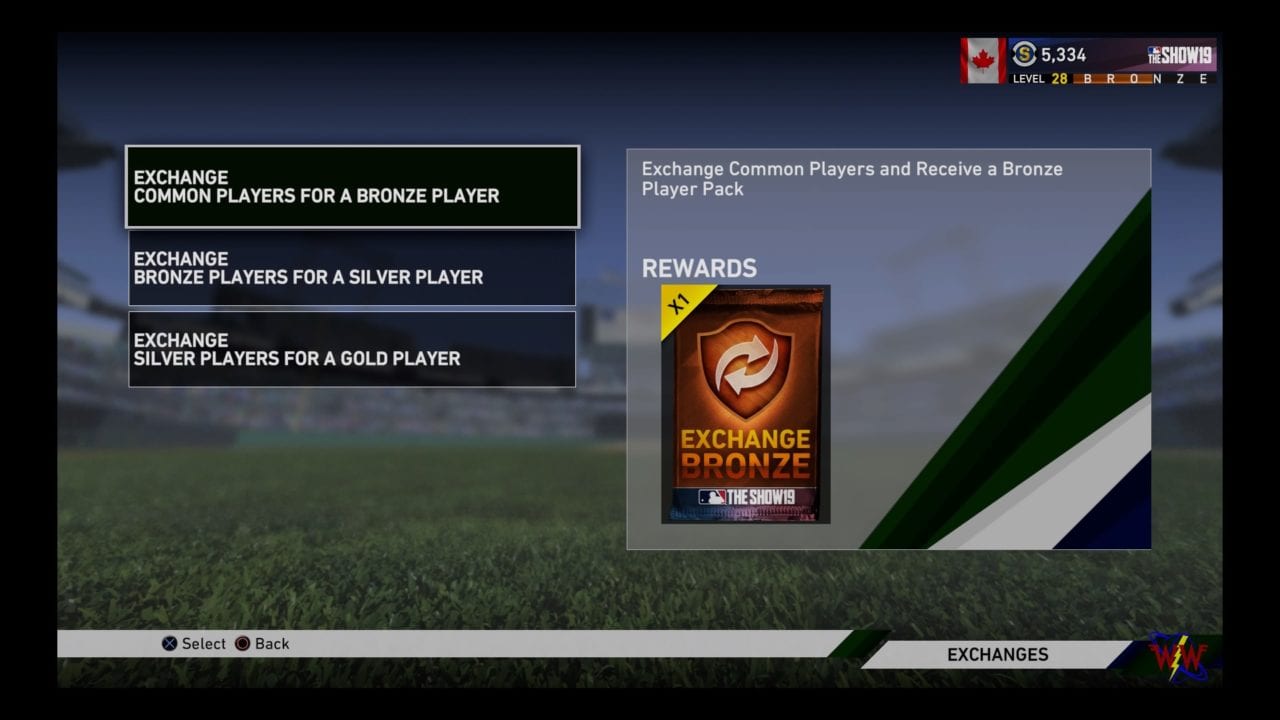 Through the first week, here are some of the Where It’s At Whatevers’ standout players:

Over the next week, I plan on tackling some of the Team Affinity programs and trying out March To October. I’ll also probably mix in some Ranked Seasons, a few more Moments (a bunch of new ones launched on Friday) and see if I can get some more collections under my belt.

Until then, Go Whatevers!