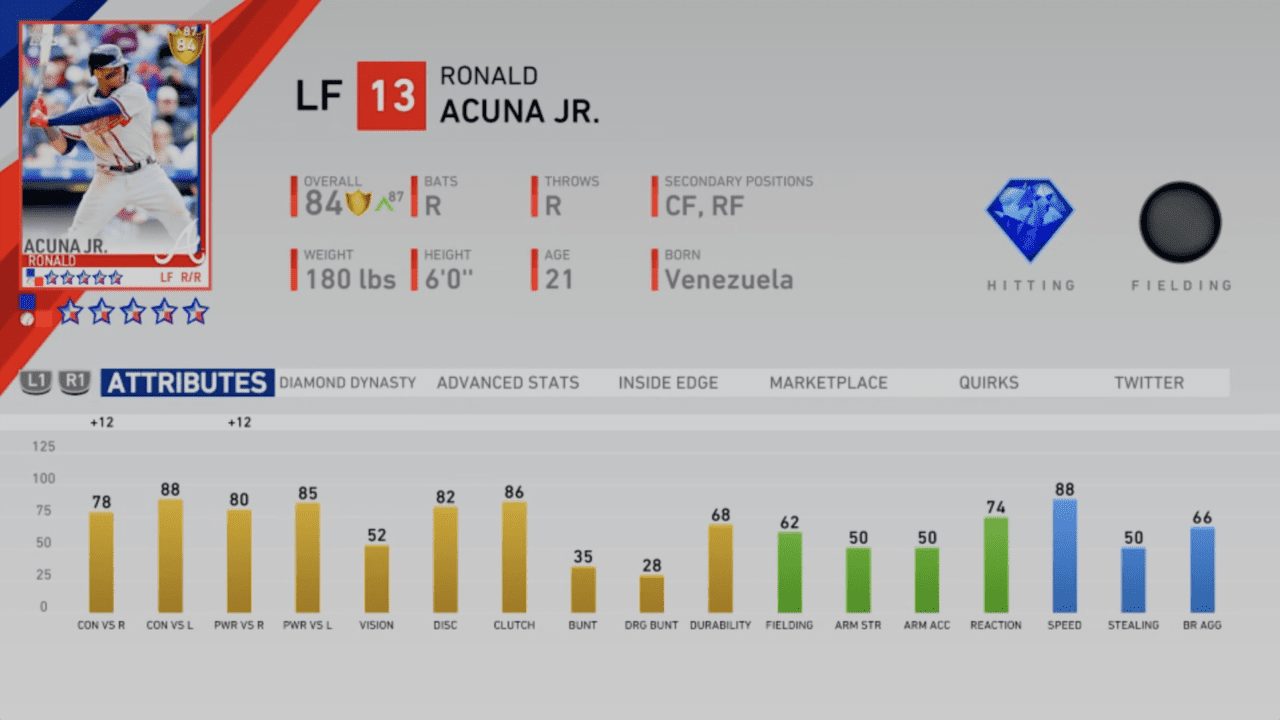 Every other Friday, San Diego Studio pumps out a new batch of content for Diamond Dynasty, highlighted by a roster update altering the ratings of player cards in MLB The Show 19. Diamond Dynasty players have become accustomed to investing in players that they believe are in for a ratings bump in the hopes of flipping those cards after the update for major Stub gains.

Greene has quietly been one of the most dominant relief pitchers in all of baseball in 2019. Having already saved a league leading 15 games and recorded 22 strikeouts, Greene has shown an ability to flash total authority in his 18 innings of work.

It’s easy to forget Greene was one of the more dominant relievers in 2017 as well, having posted a 2.66 ERA and a career best 9.7 K/9 at that time. This should make warranting a rise back to silver status easy for developers to digest. 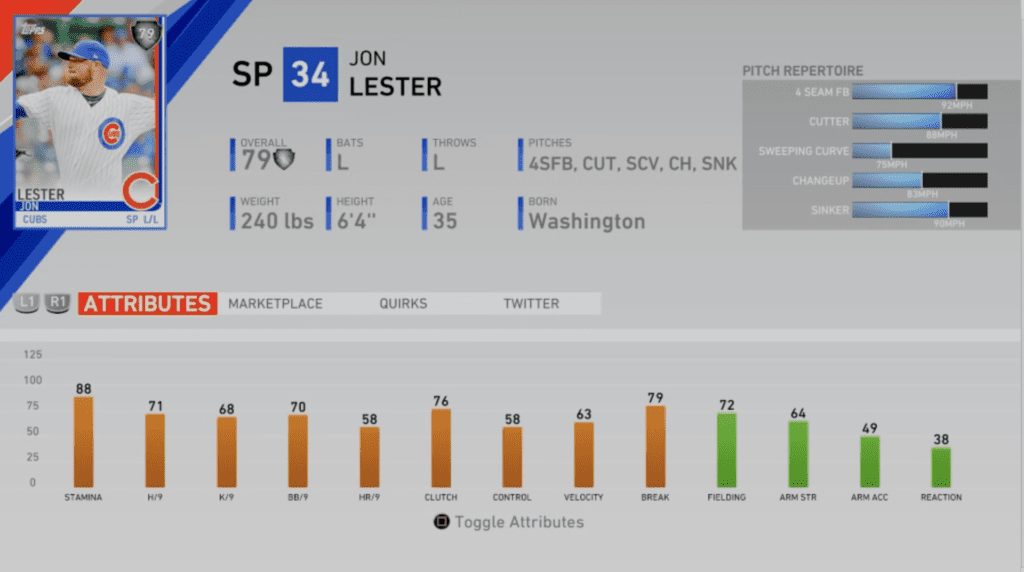 This was an easy one. Jon Lester probably should have been a gold a long time ago. He had a tough season in 2017, but his track record screams gold-level pitcher. His 1.16 ERA ranks among the best in the league and his numbers have improved every year — albeit it’s just the two years — since his disappointing campaign two years ago.

Again, I would expect rating bumps across the board for a guy sporting some of the best numbers of his career. If Lester keeps up his strong start, he’s a sleeper pick to get all the way back to diamond by the end of the year. He could be a reasonable long-term investment because, let’s face it, there won’t be much profit to be had at this point with his sell price hovering between 800-950 Stubs as of Wednesday night.

This one was a little trickier. You can make a case for guys like Trevor Bauer or Felipe Vazquez, but nobody really jumps off the paper as ready to make that leap. Doolittle’s number warrant those of a diamond-caliber player, but they’re also on par with most of his career totals.

Doolittle is a very curious case. Over the last three seasons, his 2.05 ERA and 0.796 WHIP are among the best in all of baseball. If there’s anywhere for a bump in The Show, it’s probably in the HR/9 stat. His 0.7 HR/9 allowed over the past three years is elite, and it hasn’t varied much at all during that span. Curiously, his HR/9 rating in The Show is only 63. Aroldis Chapman, whose HR/9 stat since 2017 is 0.5, which is marginally better than Doolittle, yet his HR/9 rating in The Show is 85. I’ll predict a plus-10 bump to Doolittle’s HR/9 stat on Friday, good enough to bump him to a diamond. 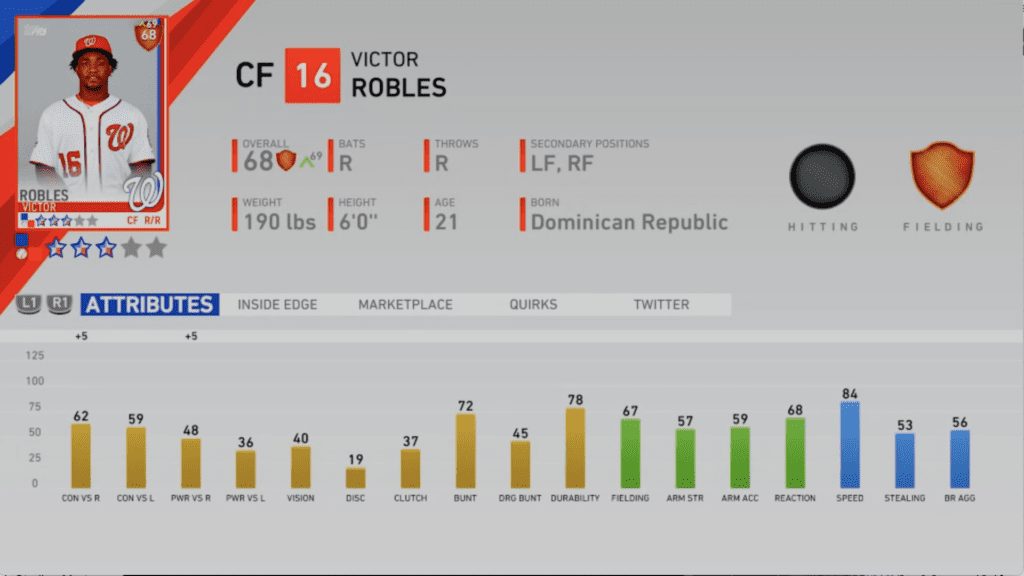 There’s no bias here, I promise. It just so happens that Nationals players are performing at levels garnering attention, regardless of their 16-25 record.

Robles is considered one of the top prospects in baseball, so it should come as no surprise to see him ascending. It hasn’t been a stellar start for Robles to this point, but he’s been better than a 68 overall, especially considering his defensive prowess.

Let’s start with the obvious points.

Robles’ power was always in question, but his seven home runs to this point (on pace for 27) should silence that narrative for now. His 48 PWR vs. R and 36 PWR vs. L should both see reasonable bumps, probably to 55 and 42 respectively. His 29.5 sprint speed (ft/sec) ranks fifth among center fielders, faster than Delino DeShields and Mallex Smith, both with speed ratings of 92 overall. Robles’ speed rating of 84 in The Show is simply incorrect. This rating is generally much tougher to change, but for this exercise, let’s predict he gets a bump to 90.

Robles is also considered a very strong defensive outfielder as is evidenced by his 70-grade fielding and throwing reports by most scouting services. Robles was worth 1.5 defensive WAR in 2017 and 2018 in just 34 games alone. From this chair, his defensive ratings ranging from 57 arm strength to 68 reaction, should all get a reasonable bump.

Brantley is no stranger to gold ratings. From 2015 to 2017, Brantley was one of the premier hitting outfielders in baseball, though injuries limited his on-field availability.

Through 42 games, Brantley is on pace for arguably his best season ever. He currently leads the American League in hits and batting average to go along with his 10 home runs. Brantley’s career high for home runs in a season is 20, so his current pace of 38 would blow that out of the water. His current 53 PWR vs. R could get a nice bump up to a 60, and his 43 PWR vs. L could get a reasonable bump as well.

Brantley is currently hitting .326 against lefties and .339 against righties. It’s pretty easy to surmise his CON vs. L going up seven points from 78 to 85. His 90 CON vs. R may get a couple upticks as well.

All these hitting upgrades should see Brantley cross the gold plateau with some room to spare. 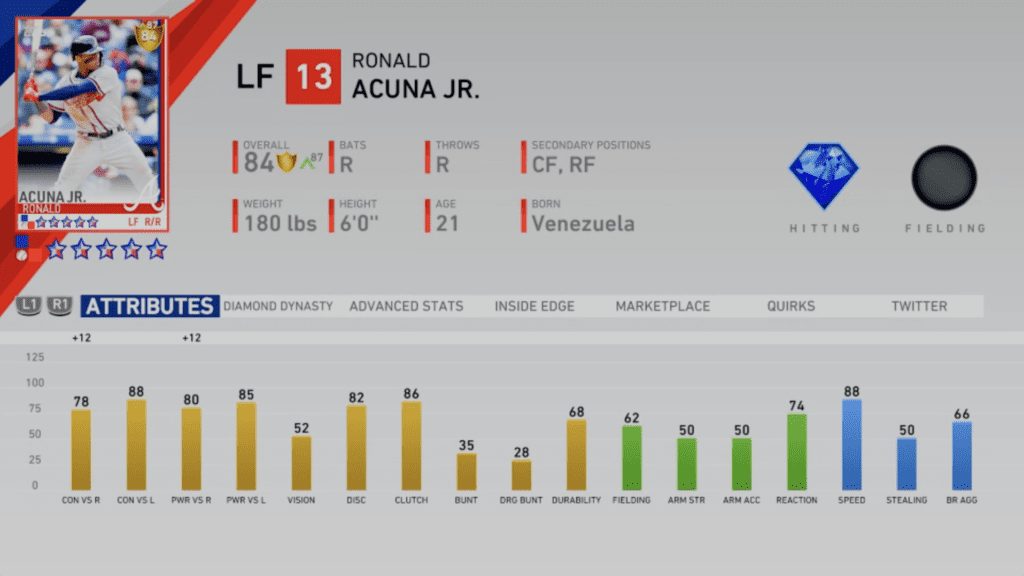 Frankly, we could argue until the cows come home as to whether this is warranted. Acuña already has fantastic hitting stats in The Show, none of which I think need to be adjusted. Where the real argument begins is with his defensive ratings.

His 62 fielding rating, as well as his 50 rating for both arm strength and arm accuracy, are questionable to say the least. Nobody would consider Acuña a “common” defensive outfielder in reality, but that’s the case in The Show.

Acuña was by no means stellar in the outfield in 2018, but his 0.3 defensive WAR to start 2019 is indicative of a player growing more comfortable in the spacious fields of the major leagues. His UZR, a defensive sabermetric designed to showcase a player’s defensive range, places him in the top 20 for outfielders in 2019. His ARM rating (Outfield Arm Runs), the amount of runs above average an outfielder saves with his arm by preventing runners from advancing, currently ranks in the top 20 as well.

Listen, from this chair, Acuña is not an elite defender, nor is it suggested he’s a “great” defensive outfielder by any means. But he’s better than his ratings suggest. He’s far from a liability.

Acuña probably deserves a plus-eight fielding bump to 70 overall and plus-eight rating bumps to his arm statistics as well. This would push Acuña to a bronze defensive outfielder, as well as an 86 overall diamond.

It’s simply a matter of time before Acuña is a diamond anyways. He’s probably the safest investment one can make this year, just so long as you don’t pay exorbitant prices to do so.

San Diego Studio will drop its latest roster update this Friday, May 17 around noon PST. Prices for players on the cusp of big bumps will continue to rise until then, so make sure to make your investments sooner rather than later. Also, as a final note, if you’re sure someone might go diamond — and a million other people are sure of it as well (see: Cody Bellinger from the last update) — then you will generally make more Stubs if you sell that player before the roster update rather than after it. The logic is that even if that player does go diamond, because many others will be trying to sell that diamond after the update as well, you will make more Stubs beating the market to the punch by selling both to those trying to stockpile more of that player, and those trying to buy the gold before it becomes a more expensive diamond. It might seem crazy, but it ends up being true most of the time with gold to diamond players.