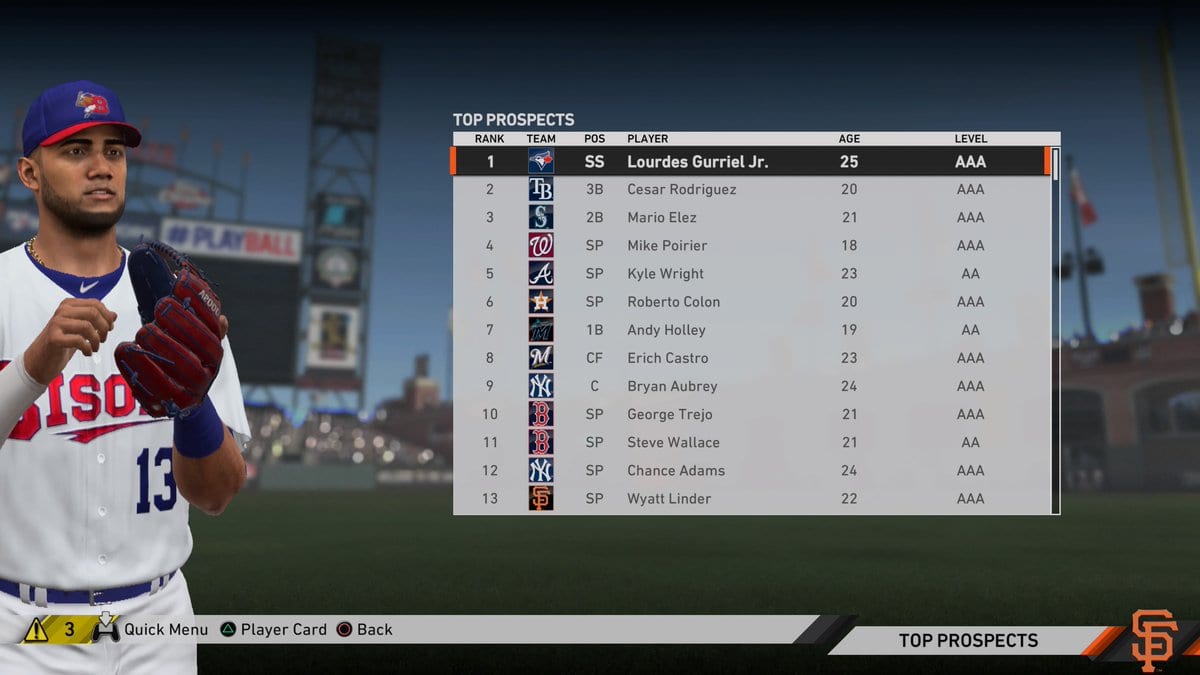 With the arrival of spring, comes the return of America’s pastime and renewed hopes for each franchise to compete for a World Series title. Each team has been painstakingly put together through free agency, trades and the draft in the hopes of putting a contender out on the diamond. The same holds true on the virtual baseball field because spring is the time of year that the release of MLB The Show allows the GM inside all of us to try and take our favorite teams to baseball glory.

For most hardcore franchise players, MLB: The Show 19 may seem like old hat, but this year there are a couple of new and important differences. Knowing what to do and when to do it could be the difference between playing into October or heading home early for the holidays. With that in mind, here are a few tips on managing a franchise in MLB The Show 19.

Yes, this is about how to manage your franchise, but I would be remiss if I didn’t start with this awesome new game mode. March to October allows you to take over a franchise and play through a truncated season with dynamic presentation elements and gameplay goals. It allows for a no-frills way to get your feet wet before jumping into franchise mode proper.

The mode itself isn’t overly long, but it allows you to get to know the personnel on your team and gives you an idea of where you need to make changes. At the end of the March to October mode, you have the option of continuing your journey in franchise mode.

While not technically a necessary way to start your franchise in MLB The Show 19, I highly recommend it just from the sheer fun of March to October. It also doesn’t hurt that you can collect rewards for Diamond Dynasty along the way. 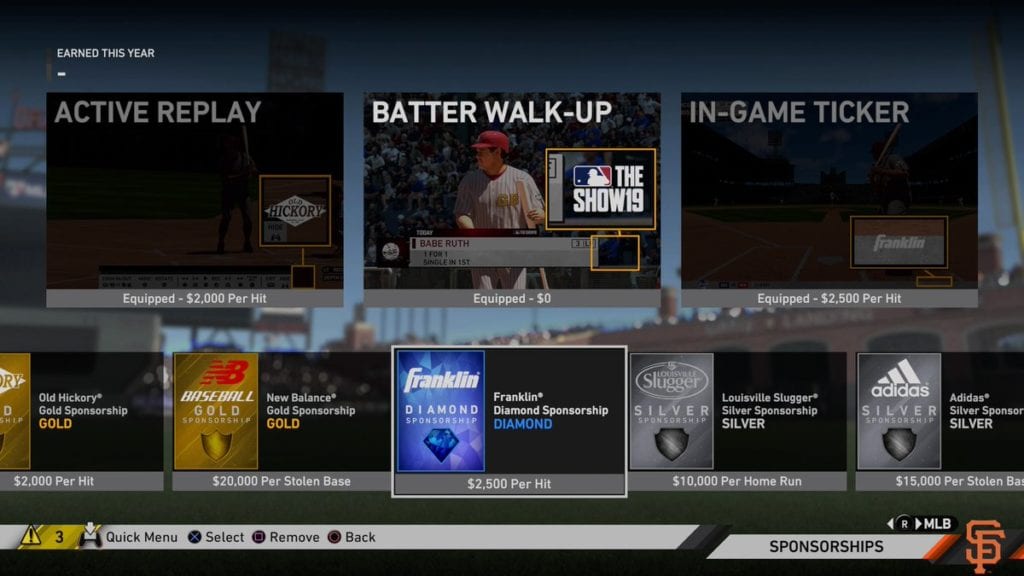 Money talks in Major League Baseball. Just look at the amount of cash that went to players like Trout, Machado and MLB: The Show 19 cover athlete, Bryce Harper, this offseason. To afford the best in the business, you’ll have to balance your franchise budget. This is especially true when choosing to run notoriously cheap or small market franchises.

To make sure you have the cash flow to compete, make sure that you choose franchise sponsors wisely. There are many different sponsor cards available in the community market for a very affordable amount of stubs. They are cheap enough that I highly recommend ONLY using what you earn in game — no microtransactions needed here.

Make sure you choose the sponsorships that are right for you as well. If you thrive on striking batters out, choose a sponsorship that rewards budget based on the amount of K’s you get. If it’s hitting, then choose a sponsorship that pays out per base knock. Sure, it looks like less on the surface to get 2,500 per hit when you can get 20,000 per save, but the frequency of hits versus save opportunities may sway you in another direction. 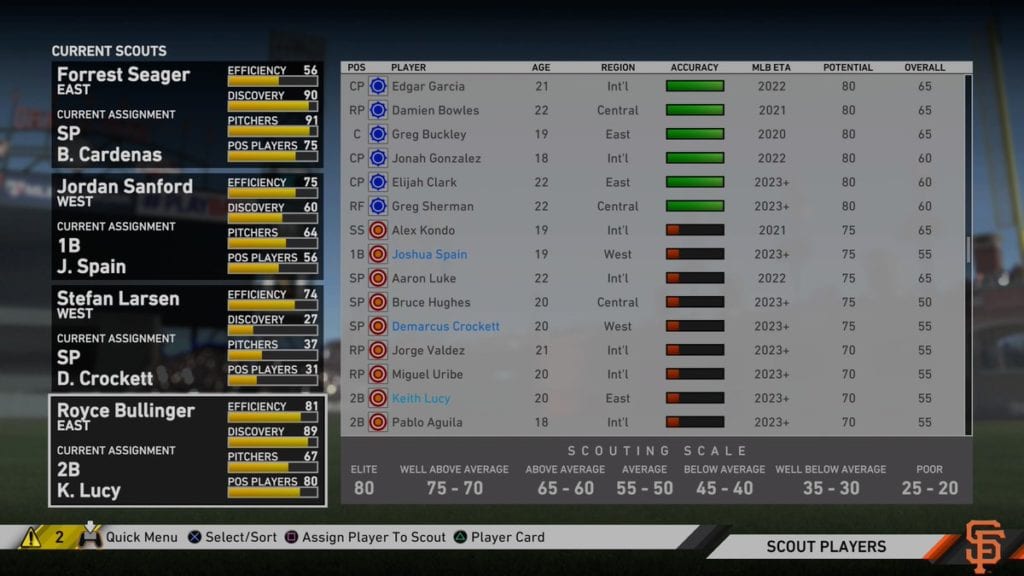 Baseball is unique in that it has multiple levels. From A ball to the Major Leagues, from the 40-man roster to the Rule 5 draft, scouting is of the utmost importance if you want to maintain success in MLB The Show. There are no perfect teams in the game. Each one has strengths and weaknesses at every level so it is vital to scout players all over the organization to fill those needs.

For the most part, scouting for team needs is mainly to build the big club, but replacing young talent in the farm system is rarely easy. One of the best things to do is spend a chunk of the budget on upgrading your scouts. There are four different attributes for each scout but I find that efficiency is the most important. You’ll also want to branch out and make sure you don’t have 3 out of 4 scouts in the same location. That’s a quick way to miss out on talent. 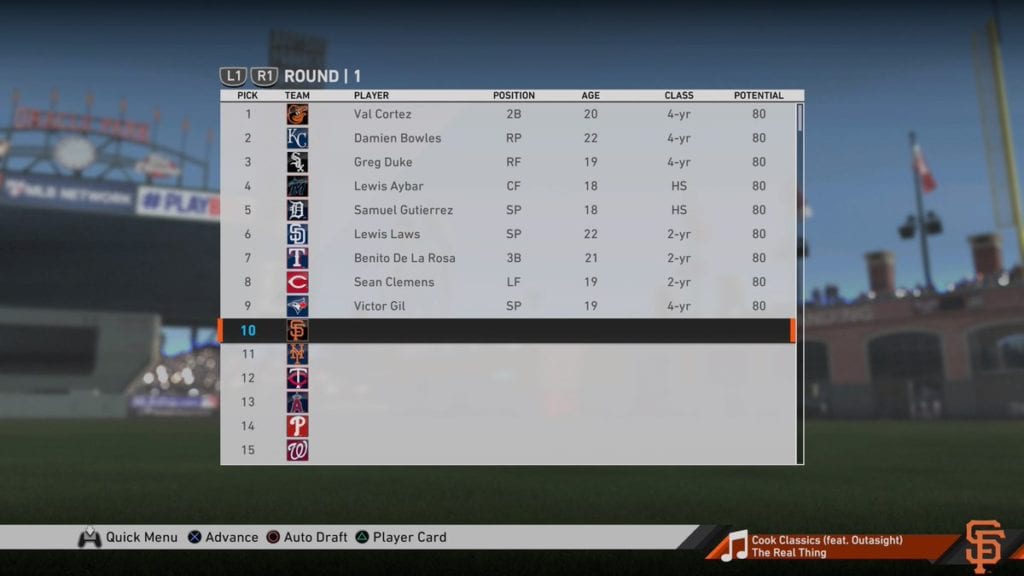 Lastly, scouting isn’t only limited to draftable talent. There are also free agents, trades and the Rule 5 draft to consider when looking to fill your roster. If the farm system is lacking in a position of need, look to trade a prospect who may be blocked at a higher level to get what you need.

You’ve found the talent now, how do you keep them around? New to franchise in MLB The Show 19 is the addition of real-life contracts and the ability to extend talent during the season. This is huge because now you get the first crack at retaining talent beyond a few dates on the calendar in the offseason. This process has been added seamlessly in the phases that were introduced last year. Players most eligible for extensions are right there on the main page.

Another new element is the ability to change the way contracts are paid out. Sure, you can still do a contract for 10 years that pays the same annual salary all the way through, but it may be more beneficial for your budget to offset some of that money. Now, in addition to a normal contract structure, you can also frontload or backload the contract. This can help you keep talent with a smaller budget by frontloading one player while backloading another. It’s all about balance. 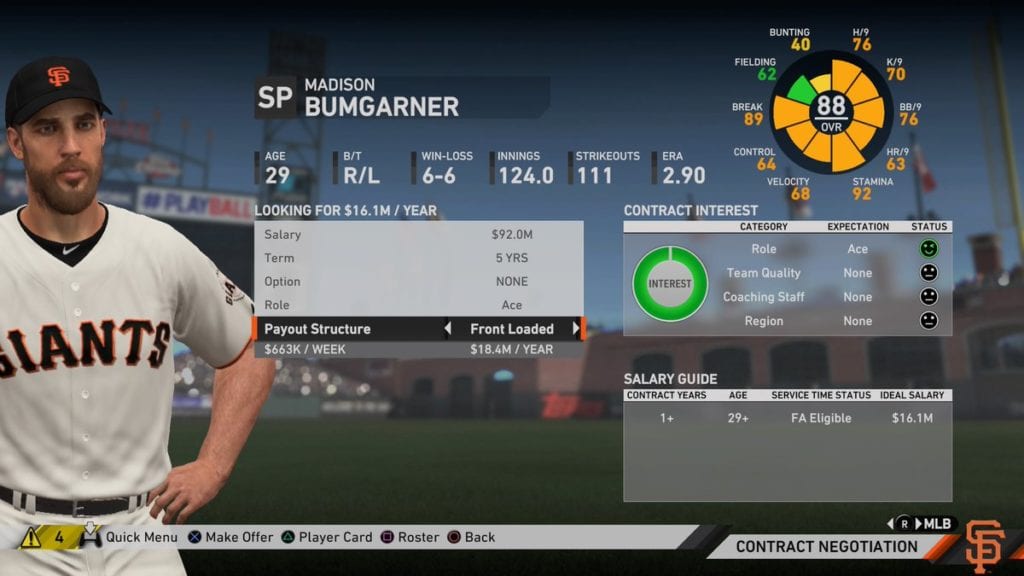 At first glance, franchise mode in MLB The Show 19 may not look like anything new. The visual upgrade from last year is largely the same and the mode, for all intents and purposes, plays nearly identical to last season. If you are a true hardcore roster builder, however, there are many little nuances that provide the ability to run a franchise as you see fit.

Whether new to the series or a veteran, following the tips laid out should help you focus on what is truly important: a World Series victory.