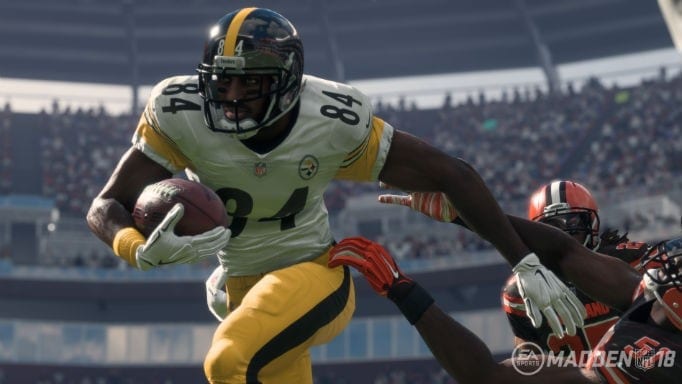 Like it or not, Ultimate Team modes are the big moneymaker for sports games today.

That franchise mode you enjoy? It wouldn’t be here anymore without the success of Ultimate Team modes. Every year, more and more people are piling into the card-based team building modes and creating their own squads and competing.

This ultimately (get it?) results in the modes getting more and more developer time. Yesterday, EA Sports posted a new Madden NFL 18 blog on the changes to this year’s ultimate team mode.

EA has heavily tweaked how Ovr’s are calculated. The long and short version is that it’ll take bigger attribute changes to move the Ovr rating appreciably.

What this all really means is that it will take more individual rating increases in order to increase the player’s OVR. We want even a one-point OVR increase to feel like a major difference in performance. Because of this, you will see lower individual ratings at the beginning of the year. The benefits of this OVR philosophy shift really come when factoring in how much “better” a player will feel after an increase in OVR, and later in the year when the player OVR’s start to get a little higher.

There are now going to be more variety to your packs, and a few other new twists added to this year’s Ultimate Team mode in Madden NFL 18.

Another big feedback topic was packs. It was extremely important for us to find ways to add more value to every pack that gets pulled. We accomplished that in a variety of ways, starting with the simplest and most noticeable change – coaches, uniforms, stadiums, and playbooks have been removed from packs. We plan to do our very best to keep most packs exclusively filled with players throughout the year.

You’ll now be able to upgrade components to your squad (most notably players) in Madden NFL 18’s Ultimate Team Mode. These will add additional value long-term to card packs. Obviously, this means that a card that isn’t so great could end up that way.

Upgrades can be earned through a variety of methods, but the end result is that you can end up with a card that’s a lot better than the one you originally received.

Team Tokens are not only used for getting non-player items, they also show up when it comes time to upgrade various items in MUT. And when talking about upgrades, there’s no better place to start than with players. At launch, each team has at least four different players that are eligible to be upgraded.

Also, EA considered heavily removing the trading block from Madden NFL 18’s Ultimate Team mode. Instead of taking that drastic of an action, they’re instead moving in a new direction with the trading block.

Any items that you trade are no longer eligible for auction.

We went as far as having discussions of removing the trade block entirely, but that’s not something we’re ready to pull the trigger on. Instead, we‘re making a change in the way trades work in Madden 18. Now, when you trade an item, that item becomes non-auctionable. However, if that item is traded back to the original owner, it is once again allowed to be auctioned.